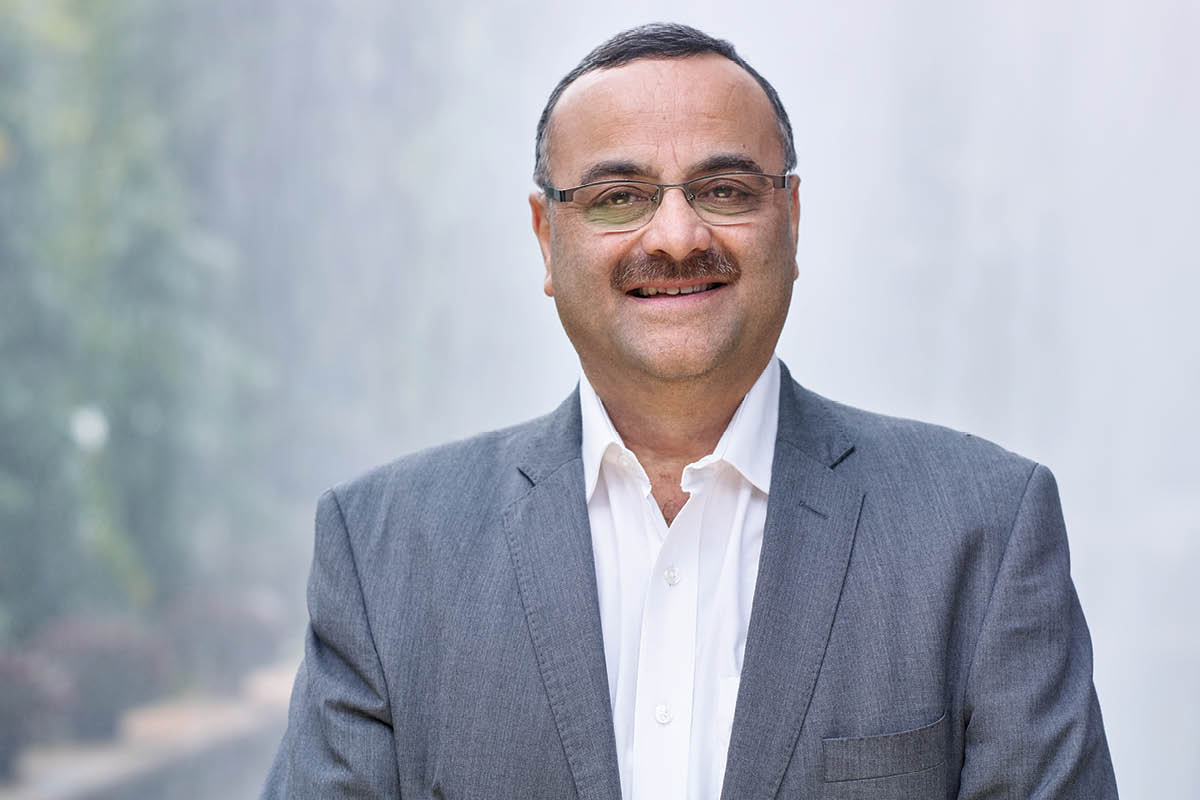 Founded in the late nineteenth century and now boasting an annual revenue of more than US$3 billion, Timken is one of the world’s largest bearing and bearing accessory manufacturers. When it established its subsidiary in India in 1987, however, it was almost back to square one.

“When we came to India, only a niche market knew of Timken,” Managing Director Sanjay Koul explains. “Only those involved in the metal industry knew us. Our footprint was very small. We had a very small line.”

Sanjay has been with the company for almost its entire lifespan in India, having joined as a production engineer in 1990 after studying mechanical engineering at the Birla Institute of Technology and Science. At that stage, he was one of the first engineers.

He has moved up through management ever since, holding positions as national sales manager for its award-winning railway business and managing a plant in Jamshedpur. In the same city, he completed a Master’s Degree in Business from the Xavier Labour Relations Institute.

A successful stint running Timken India’s Asia supply chain from Wuxi, China, followed, before a Shanghai-based role as director of manufacturing and supply chain for Asia. Sanjay then moved into his current role as managing director in 2012. He says the company is almost unrecognisable from its early days in India.

Adding to the difficulty for Timken in its early years in India was the fact it was not well known then. “Timken wasn’t a big name in the Indian market,” Sanjay recalls. “It was not well-recognised in India, not like our competitors were recognised.”

Overcoming this initial lack of brand recognition, Timken in India kept expanding, establishing manufacturing plants in Jamshedpur, Chennai and Raipur. It became a major player in the original equipment manufacture (OEM) segment, designing and making equipment and working closely with its distribution network to refine the design and application of its products.

“There was a lot of knowledge transfer in those early years,” Sanjay recalls. “The company was small, but a lot of technology and expertise was absorbed by the local stakeholders.” Sanjay says the Indian Government’s increased willingness to incentivise commerce has also been crucial. “I think the challenges in India are becoming less and less,” he says. “When Timken had its first plant approved, coming to India was not easy at all; you had to have a joint venture partnership. You could not come on your own. But now you can do 100% foreign direct investment.”

Sanjay also points to India’s special economic zones (SEZs) as a cornerstone of the country’s new business-friendly approach. Timken in India established its manufacturing facilities inside SEZs, which allowed it to import equipment for export manufacture duty-free and to access tax concessions.

“The ease of doing business in India has dramatically changed,” Sanjay says. “Putting up a plant has become very easy. Finding suitable land is always a challenge in India, but the new laws and the new ease of execution that comes with them are helping us at every step.”

Timken also broadened its services beyond engineering bearings to include bearing repair and mechanical power transmission services. It has a technology centre in Bangalore, which aims to make the company’s technical and engineering know-how more accessible to its customers.

Manufacturing the bearings takes significant specialised expertise, and Timken India has acquired a deep knowledge of the field since its move into the Indian market. Where the company once sent engineers to the US to learn how to make bearings, it has now become such a recognised industry leader that it teaches others around the world how to manufacture ball and roller bearings. “That’s a major change that has happened in the past two decades,” Sanjay says.

The ease of doing business in India has dramatically changed. Putting up a plant has become very easy.

More broadly, Timken is likely to continue its growth as an export business. In 2012, a quarter of its revenue came from exports. This grew to 35% by 2015 and is expected to climb further. “Timken has started to cater to not only the growing needs of the domestic market, but to making India a leading manufacturing destination for export products,” Sanjay says.

As the company has grown, Timken India has struck a balance between consolidating its core competency and finding new avenues to expand into. “Timken is basically a manufacturing company,” Sanjay says. “We’re always concerned with how to promote manufacturing, and we’re working with different state bodies and chambers of commerce about manufacturing and how to push reforms for it.

“On the other hand, a lot of new things are happening, and we always remain on top of such things to make sure that we don’t miss out on being competitive in the global market. We have never been interested in simply selling commodities or products. For 20 years, we’ve believed in value; creating value, not just selling it. We want the end user to say, ‘It has a Timken bearing on it and there’s value in that.’ That is special, and in simple terms, that is what sets us apart.”

Timken was started as a family company, and in India it’s determined to retain the collegial atmosphere of a family concern, even as it expands into new territories and becomes one of the major players in its field.

“A lot of the staff here have grown up with the company. Working with the same people, the same customers, we have made good friends. The journey has become so involving that the company has become a kind of extension of myself. We’ve learned how to make bearings, how to do business. We’ve seen the ups and downs, and now we know bearing-making and selling in India like the back of our hands.”

Unlike many major companies, Sanjay says, Timken doesn’t operate with a key supplier policy. “We see every supplier as a key supplier. We want to keep that count low and make those suppliers grow. We’re not looking to grow our supplier base, unless we need capacity enhancement. Even then, we would give our existing suppliers the right of first refusal.”

Sanjay adds that Timken has the view that constantly pursuing more suppliers may detract from the relationship building that it values. “We choose our suppliers with care, but once we have picked them we will hold their hand; we will give them technical help. They could be young, small-time engineers. We will help them not just financially or with the technical know-how but emotionally as well. The key to our success is that we care for our suppliers. If our suppliers don’t feel that they are part of Timken, they won’t achieve that same level of quality.

“Suppliers see a lot of value in being strategic partners with us because they can go to the next level technically. They get access to global technology, they get strategic help, and the partnership opens up markets across the world.”

With strong, selectively chosen suppliers comes strong synergy, Sanjay explains. “It means we can easily implement our supplier quality development program, because they implement the process.”

Continuously looking for opportunities to expand

As a leading manufacturer of taper roller bearings, Timken India is involved in a broad range of businesses. Bearings are an integral part of many types of machinery, from wind turbines to mechanical fans and blowers, pumps and gearboxes, and are vital for any number of industries, including agriculture, construction, mining, transport and energy. It’s a diverse range of applications and clients, which Timken believes offers a number of different avenues for growth.

Timken India has also targeted inorganic growth, acquiring smaller service centres that offer gearbox repair and motor rewind. The 2017 acquisition of ABC Bearings, which produces cylindrical, tapered and spherical roller bearings, as well as slewing rings, also broadened the range of locally produced products it could offer and extended its customer base. It is anticipating the new acquisition’s efficient manufacturing plant can be leveraged into further export business.

Sanjay says Timken India is continuously looking for opportunities to expand. It is currently exploring ways to increase its manufacturing capacity and has made moves to increase its aftermarket capabilities in recent years. This included opening a service centre in Raipur that offers advanced diagnostic and repair facilities for bearings and gear drives.

This is the first such centre Timken has opened outside the US and is an important part of Timken India’s progression towards offering a one-stop shop for the industries it services, ranging from mining and power to construction and metal.

Sanjay anticipates this arm of the business will continue to grow. “That is a big focus, the industry service portfolio. It’s a continuous battle, and every day we want to increase our penetration, which means growing faster than the rate of market growth. If the market is growing at 5%, we want to grow at 10%.”

Sanjay says he expects Timken’s manufacturing footprint to increase as the company introduces new product lines and services. “There will be more diversification. Timken is not only producing bearings, but the complete drive chain. Be it couplings, pulleys, chains, gearboxes, or lubrications, we have the complete offerings in all mechanical transmission.”

Another likely growth area lies in the country’s rail business. One estimate is that this sector will make up 30% of the company’s business by 2020, up from the current rate of 23%. Timken India has updated its Jamshedpur plant to meet this growing demand. The plant will have greater capacity to produce railway bearings and new grid lines soon. This will tie in with state-owned Indian Railways’ plans to spend INR1.35 lakh crore (US$21 billion) upgrading the national rail system in the FY18 budget.

Timken India is also well-placed to supply axle boxes and railway seals as well as a range of bearings for the ambitious project. Sanjay adds that Timken India’s ability to provide complex designs and its expertise in coating roller bearings means it has scope to work with the nascent defence and aircraft manufacturing industries in India.

For all the technical and mechanical know-how that Timken India has built up, Sanjay says, its human resources remain its most valuable asset. “We’re only as good as our people. We want a team that can take us into new areas, enable more penetration.”

We’re only as good as our people. We want a team that can take us into new areas.

While it draws on predictive models and data analysis to determine how best to meet the demands of a changing market, Sanjay says it is key for Timken India to keep its principles front of mind. “We want fewer accidents, a safer environment, more productivity. We want to grow year on year. But all the mathematical models have to come out of the company’s core values of quality, teamwork and excellence.”

Sanjay is proud to say that Timken has now been invited by governments to talk about doing business ethically. It has also embraced a range of CSR initiatives, which include programs to fight hunger, promote sports and activities for disadvantaged people, and encourage environmental sustainability.

This approach is now part of the fabric of Timken India, which has a policy in place to use at least 2% of its average net profits each year for CSR activities. More generally, Sanjay says it aims to bring ethics and integrity to every aspect of its work.

“Timken is a responsible company. We really work for the long haul, and focus on adding value for the customer. We want to make it so the customer can forget their troubles and just concentrate on their work. We want to ensure that their excellence goes a notch higher after working with Timken.”