Lexus has taken one of its medium luxury sedans and tricked it out so that it looks and sounds fantastic. But is fitting a powerful engine and sports accessories enough to create a genuine alternative to the status quo? In wartime, stealth is crucial. Camouflage works exceptionally well on land, but on the open water it’s nigh impossible to paint a scheme that will blend in with the water and the sky. In World War I, the British Royal Navy sought an alternative, taking merchant ships and fitting them with formidable armaments. The ships were designed to lure unsuspecting enemy submarines to the surface where they would suddenly find themselves under a hail of shells. The armed merchant boats also took on dedicated military vessels, catching them by surprise and winning several marine battles.

These innocuous-looking stealth craft were called ‘Q-ships’ and after the war had ended, their name was adopted by other forms of transport that flew under the radar. The term Q-car, or sleeper, is now used to describe a vehicle that has disguised its true capabilities.

For years it was owners who tricked out their machines under the skin, keeping quiet about their cars’ abilities, but in the last few decades, manufacturers have cottoned on to the trend.

The Germans have been the best at it, creating executive expresses with more power than Ferraris and Lamborghinis but that can sit in traffic without drawing undue attention. But the Japanese have created their fair share of Q-cars over the years too, and the latest from Lexus continues in the same vein. 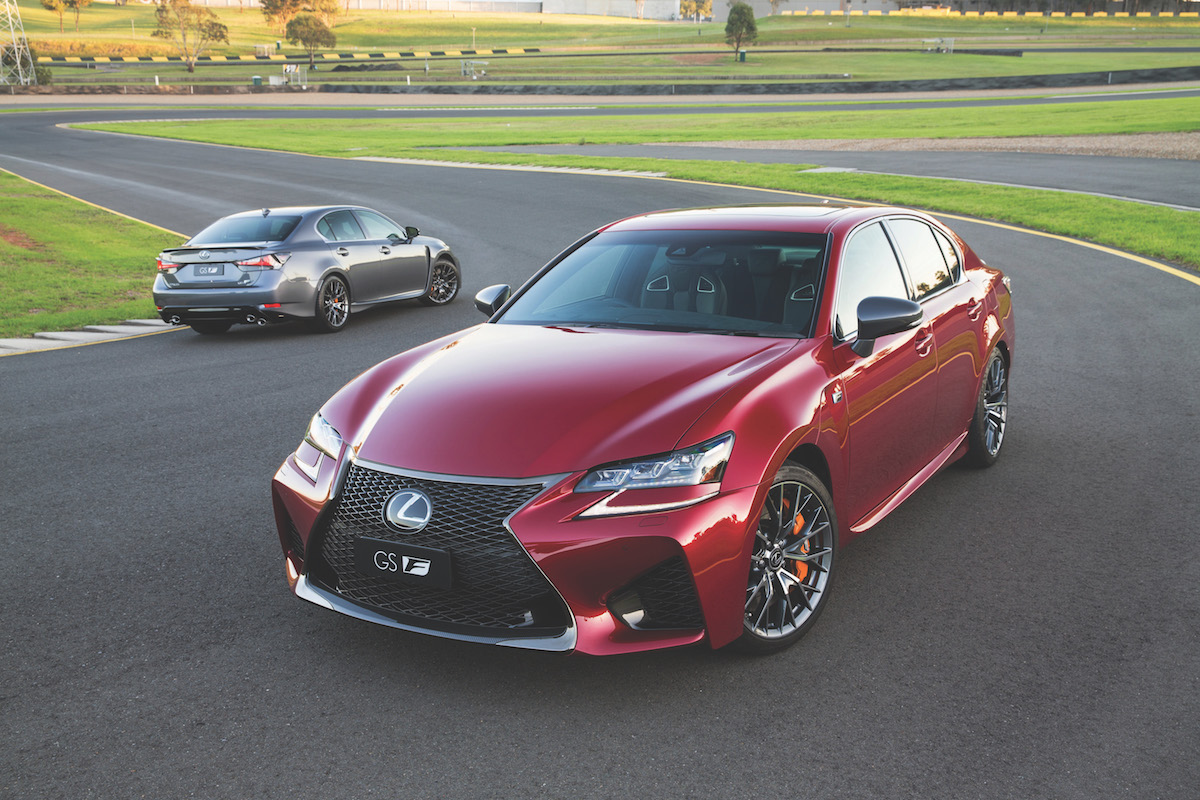 The GS is Lexus’ mid-size sedan, and in its base-model guise (the GS 350) it’s a winner; it’s smooth, well-built and sounds great. So, what happens when you turn it into a fully fledged sleeper? That’s the question Lexus was hoping would be answered when it launched the GS F. The F stands for Fuji Speedway — a nod to the car-maker’s testing ground for its sports models — and, given it’s fitted out with Lexus’ classic five litre V8, the moniker seems appropriate. The engine may be naturally aspirated, but it makes a massive 467bhp
and 530Nm.

And did we mention the sound? It’s a classic V8 bellow, but with such a refined timbre that it sounds like a NASCAR with the edges filed off. From about 3500rpm the exhaust and intake open right up and it emanates a distinct note that lets everyone in a two-block radius know you’re very much enjoying this machine.

But it’s not all boy-racer; it can be quiet and refined, too. In Eco mode, it potters around, hardly feeling like a 467bhp sedan; in Normal mode it has a better throttle response but with its suspension in the softest setting for everyday driving. Its refinement is helped by an eight-speed automatic, which is happiest in Normal mode, where it will blend ratios without fuss. But flick the dial across to Sport or Sport Plus, and it starts to lag a bit, especially when using the wheel-mounted paddles. Certainly, the German eight-speed autos (manufactured by ZF Friedrichshafen) are far more versatile in this regard.

The Drive Mode dial also changes the instrumentation when activated, alerting you to how far up you’ve turned the wick. The instruments combine digital and analog dials, using a TFT centre screen, which changes graphics depending on which mode you’ve selected. Its intent is clear; subdued, everyday numbers, swirling blue increments and then contrasting red and white digits for Sports and Sports Plus modes. 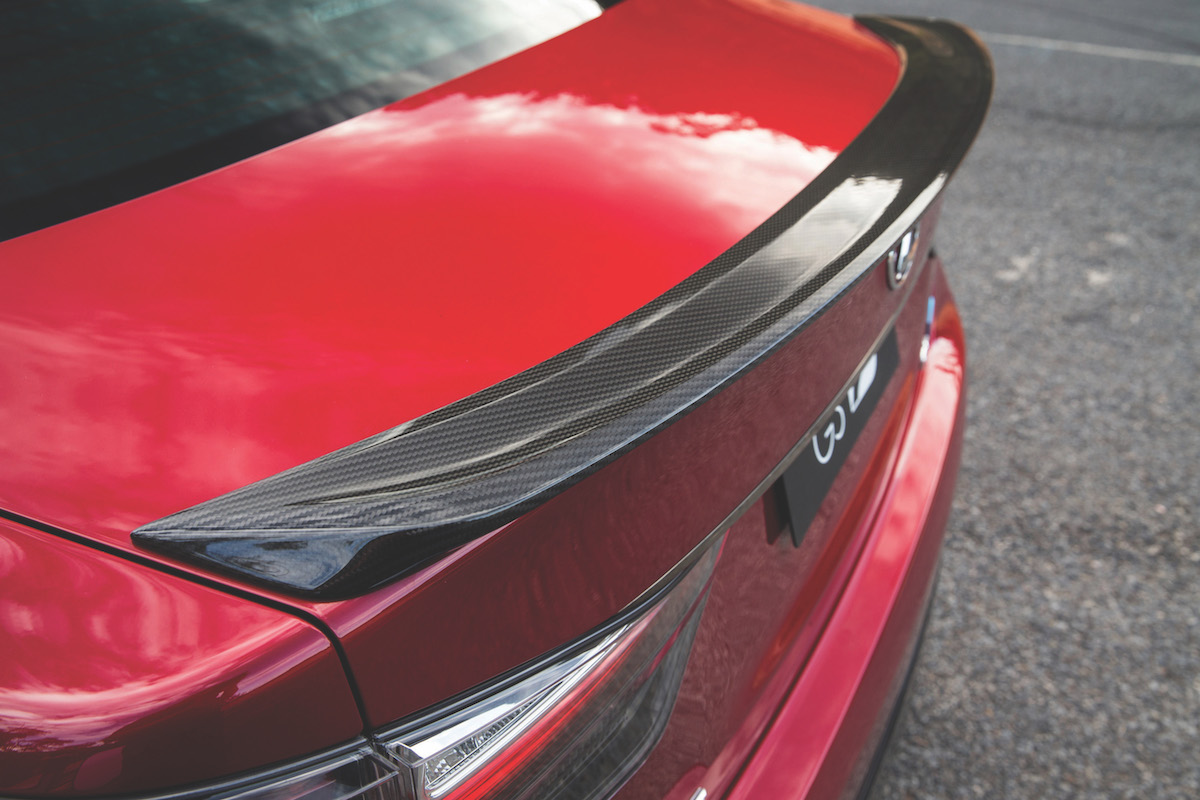 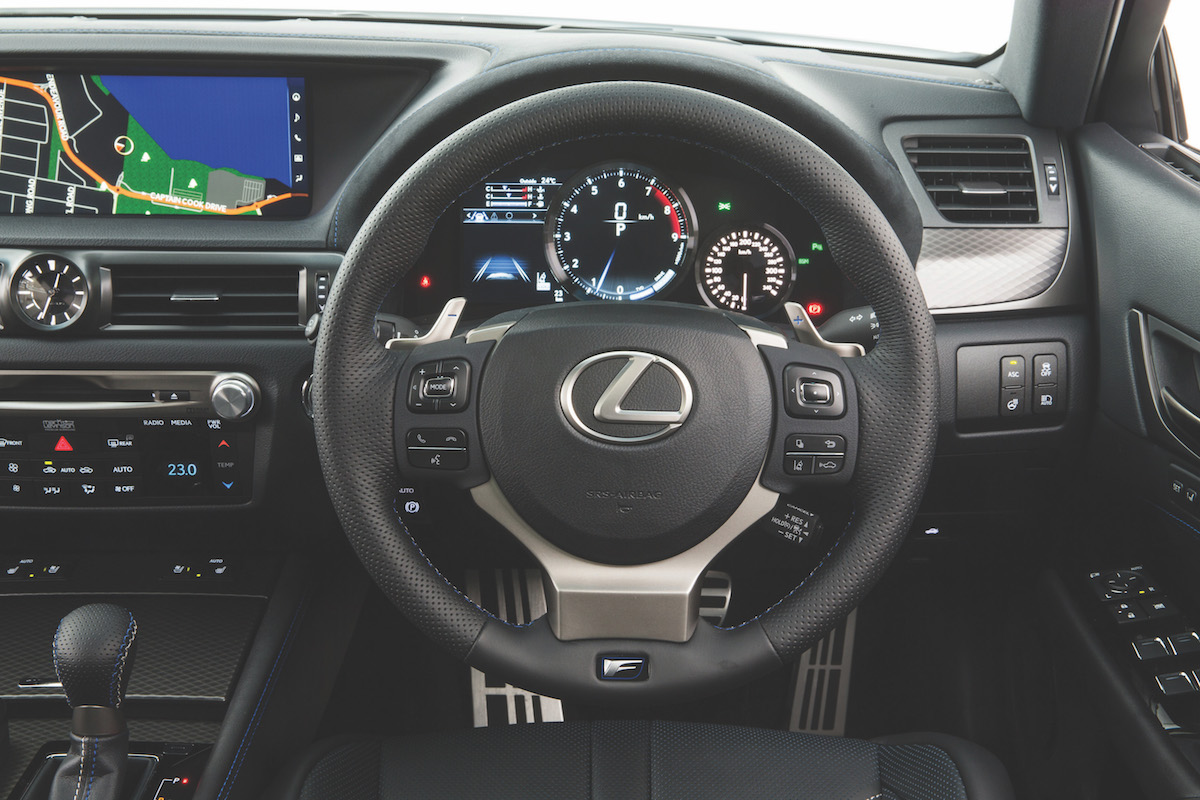 It’ll hit 100kmh in 4.6 seconds, and after another 10 seconds, it’s at 200kmh, with each gear change punctuated by a slight pause before the V8 thunder blasts in again.

It’s in this last mode that you really find out what the GS F is all about. It’ll hit 100kmh in 4.6 seconds, and after another ten seconds, it’s at 200kmh, with each gear change punctuated by a slight pause before the V8 thunder blasts in again. Sports Plus also firms up the ride to ensure sharper turn-in when ribbon-like roads approach.

But while it makes the handling better, it completely destroys the ride. The GS F suddenly becomes jittery and rough, and unless you’re driving on glass-smooth tarmac, your spine will be getting a workout. Best stick to Normal mode for most situations because, though the seats are beautifully supportive, there’s only so much harshness the padding can isolate.

The seats themselves are both gorgeous to look at and to sit in. There are perforations for the in-seat heating and cooling, and the sewn pattern imbues a sense of sportiness, as does the raised bolstering. Getting a comfy driving position is simple thanks to all-electric adjustment, but despite the overall size of the car, rear passengers get a bit less room.

Carbon-fibre accents are found throughout the cabin, and the general fit and finish is top notch. The insertion of all the extra sporting materials means it does suffer from being a bit too busy inside, however. Another black mark is the infotainment and its frustrating mouse-and-pointer system.

It uses haptic feedback when the pointer is on top of a clickable function but can easily jump past where you want and it is far too slow to type addresses. An MMI- or iDrive-style dial, or even a touchscreen, would fix that but clearly Lexus doesn’t want to follow in its German competitors’ footsteps.

Caught somewhere between a sports sedan and a grand tourer

By going its own way with the GS F rather than creating a German clone, Lexus has created something that’s caught somewhere between being a sports sedan and a grand tourer. It has some of the hallmarks of both, but none of the defining features of either.

Like any Lexus, you’ll get the best customer service in the industry, a drivetrain that will never break and build quality to rival the best. But it’s not the quickest nor the most comfortable Q-car money can buy. Like a battleship dressed in civilian clothes, the
GS F can’t quite decide what it wants to be.