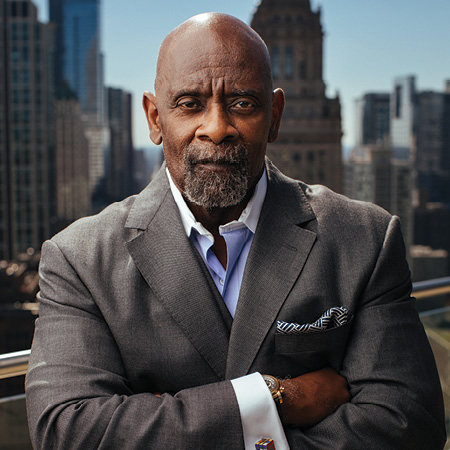 When the Pope beckoned Chris Gardner forward, the passionate philanthropist had no clue regarding the best way of greeting the man.

“How do you greet the Pope?” he asks with a huge smile, as though he’s laughing at himself. “I don’t know. Do you bow? Do you kneel? Do you kiss the ring?”

To gain some sort of inkling and to pick up any tips, Chris made sure he was last in line to meet Pope Benedict XVI. But nothing prepared him for what came next. 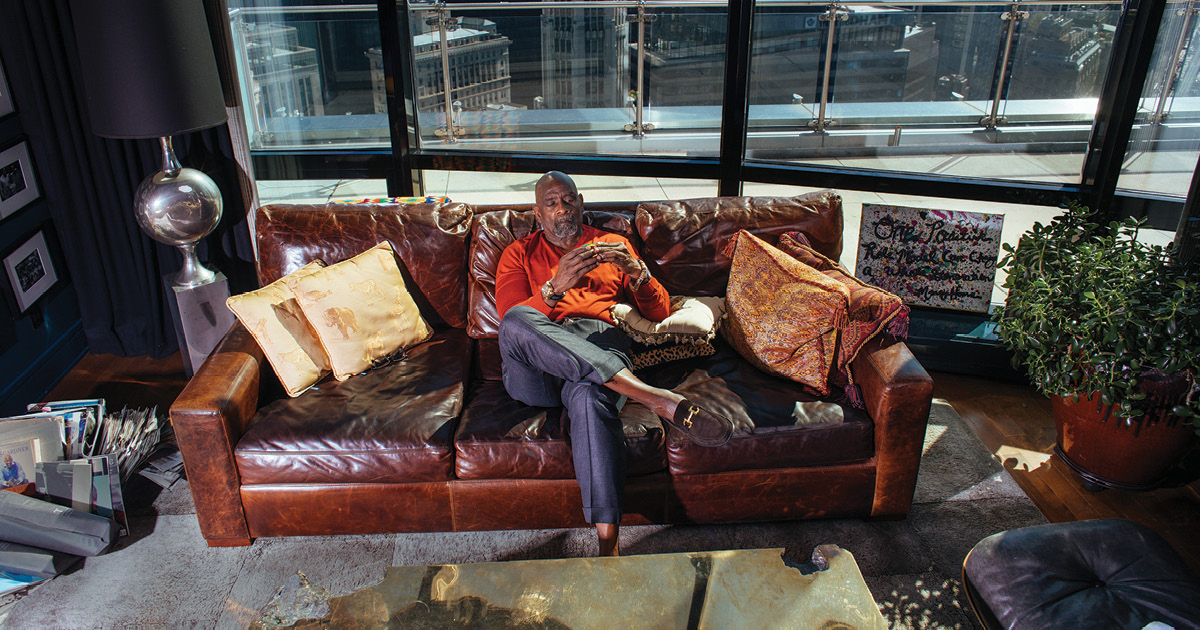 Chris’ rich baritone laugh, and it’s a deep full-bellied one, resonates around the room at the memory of the diminutive Pope in his fire-red loafers.

Chris’ rich baritone laugh, and it’s a deep full-bellied one, resonates around the room at the memory of the diminutive Pope in his fire-red loafers. A stickler for age-old Vatican customs, Pope Benedict wore red shoes to symbolise the blood of martyrdom for Christ and Catholic martyrs, and evidently to break the ice when meeting a towering, nervous hulk of a man last in a line of meet and greets.

“I failed so many times, but from all of those failures, I was able to use them, and learn something. Failure is ok; quitting is not. Quitting can become a habit.” – Chris Gardner

“That means, hey man, relax, I’m just the Pope. And what the Pope has, is humility,” he says, spreading his arms like wings.

Chris was impressed, but not overly surprised, as he finds large doses of humility in most of the world leaders and decision-makers he meets. “Humility. I will never forget meeting Nelson Mandela, humility. The Pope, humility. Dr Maya Angelou, humility. They all have it, man.” It’s a characteristic distinctly evident in Chris’ own persona — in a man who listens, engages and speaks from the heart, and has that special knack of making each individual in the room feel exceptional.

Reclining in his chair, dressed in a designer suit, expensive shoes and a shirt with purple hues to match his undoubtedly designer socks, this hugely successful businessman, net worth estimated at US$60 million, is clearly comfortable in his skin. But this is also a man who hasn’t forgotten what it’s like to have nothing: nothing, except a dream and a Plan A.

His journey from homelessness to penthouse and from ambitious CEO to the global inspirational speaker he is today is well documented. His 2006 autobiography, The Pursuit of Happyness (and yes, it is Happyness with a Y, as written on the door of the childcare drop-in he used for his toddler son Christopher Jr) tells of harrowing nights spent sleeping rough, his child often strapped to his back as he juggles homelessness with an internship at brokerage firm Dean Witter Reynolds. 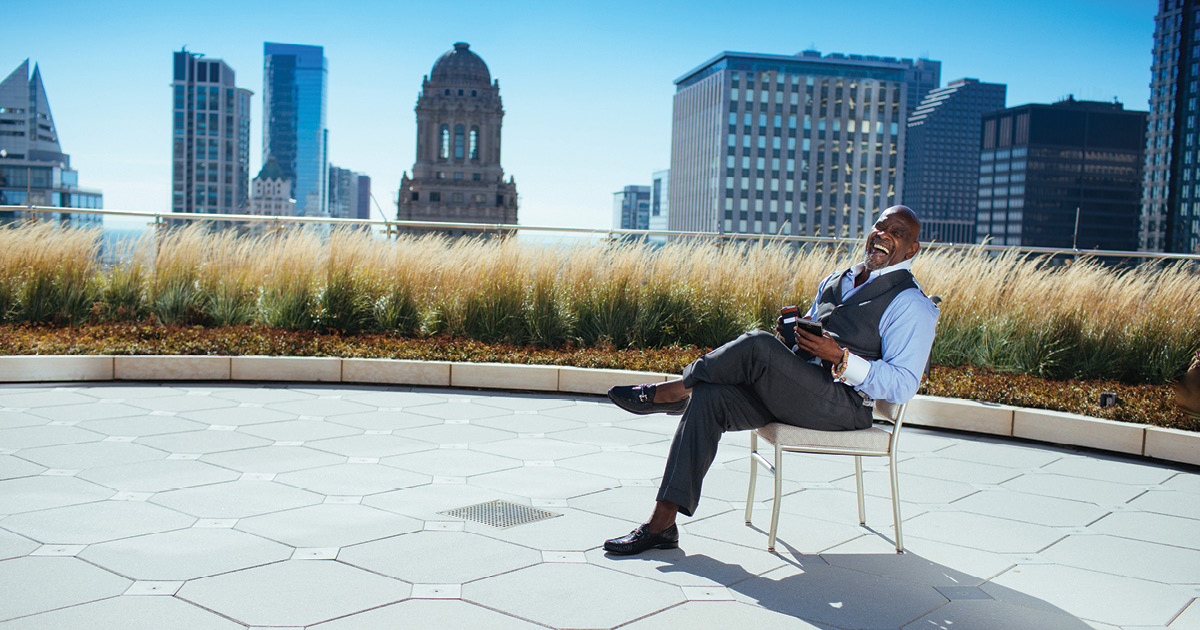 “I failed so many times, but from all of those failures, I was able to use them, and learn something. Failure is ok; quitting is not. Quitting can become a habit.” – Chris Gardner

The New York Times bestseller became a film, Chris working hands on as an associate producer and featuring as a blink-and-you’ll-miss-it cameo in the final scene. It’s a mostly factual account, with Will Smith portraying Chris, while Smith’s son Jaden plays the role of five-year-old Christopher Jr, a little poetic licence taken because in reality Christopher Jr was just 14 months old and in nappies, when cradled in his father’s arms as he bunkered down to sleep in subway stations, flop-houses, public toilets or shelters.

The circumstances were dire, but perversely triggered by Chris himself, and a man stepping out of a shiny red Ferrari. Chris encountered the man in 1981 while pounding the pavements of San Francisco selling medical equipment. He was so impressed and in awe of the car, he couldn’t help but stop and ask him two questions: “What do you do? And how do you do it?” The stockbroker’s answer was simple. All Chris had to do to get that Ferrari was to be “good with numbers and with people”. It was a pivotal moment and the day Chris launched his second Plan A.

Chris had determined his first Plan A by age five. His short years were scarred by poverty, domestic violence and alcoholism, but long enough for him to commit to providing his children with the father he never had. “I was going to make sure my children knew who their father was,’’ he remembers. “I was going to break the cycle of men who were not there for their children.”

In 1970 at the age of 16, Chris discovered his spiritual genetics and the drive to put his plans into action. While watching a college basketball game on television and marvelling aloud that one day some of those young players would make a million dollars, his mother Bettye Jean Triplett, declared: “Son, you could also make a million dollars, if you wanted to”.

From that day, a thought that had previously never entered his head, never left his head. Bettye Jean had given him permission to dream, to become world-class at whatever he did with his life, professionally and as a parent. There has never been any Plan B: a surprising insight into a man whose life has been littered with disappointments and challenges. 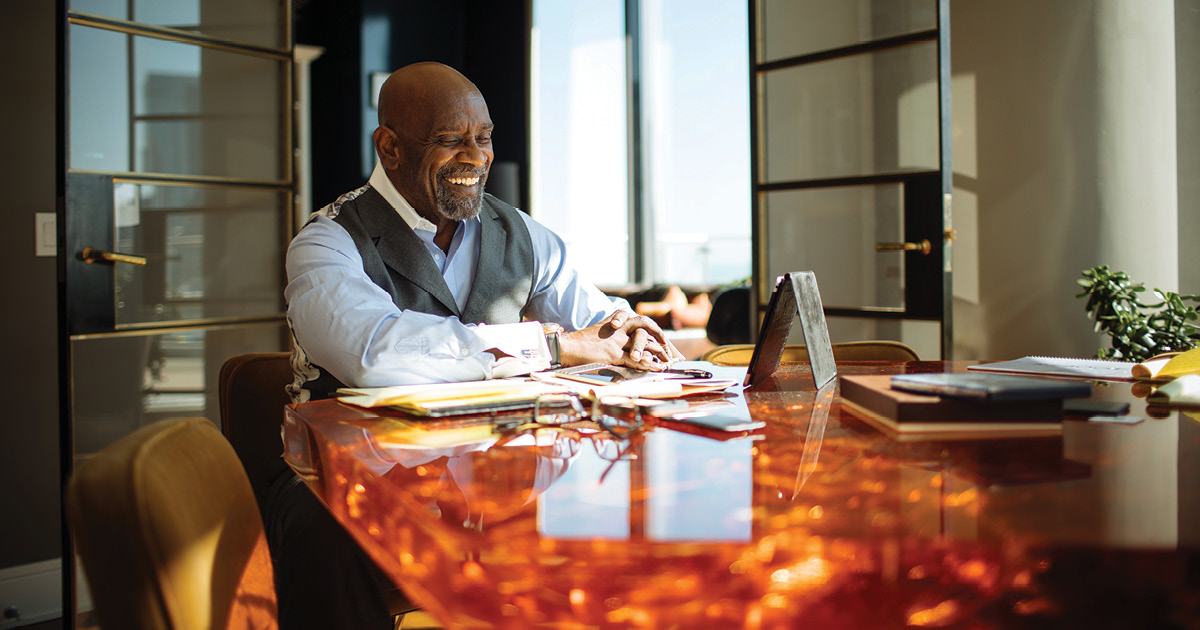 “Plan A is the only plan to have,” he insists. “When you’re talking about doing something, my position is there is no Plan B. You’ll hear people make this claim, ‘well you have to have something to fall back on’.

“Plan A is the only plan to have,” he insists. “When you’re talking about doing something, my position is there is no Plan B. You’ll hear people make this claim, ‘well you have to have something to fall back on’. We already have that — it’s called a ‘butt’. There’s only one plan, and that is the plan you have in your heart. That’s your Plan A. Plan B is a compromise.”
Sticking to his professional Plan A, Chris turned his fortunes around dramatically in 1983 when he accepted a job at brokerage Bear Stearns & Co, and quickly became a top earner. His parenting Plan A took a dramatic turn however when two years later, after a brief reconciliation with Christopher Jr’s mother, he became a single father of two with the birth of his daughter Jacintha.

Still stubbornly refusing to compromise on his master plans and with just $10,000 and a single stick of furniture, Chris founded brokerage firm Gardner Rich & Co in Chicago. And just like his mother told him he could, 12 months later in 1988, Chris earned his first million.

He’s had scores of Plan As since, and while a Plan B was never an option, failure certainly was. “Failure, let me tell you, is probably one of the most important things that we can all do, as long as you learn from it. We’re all going to fail at something at some point, but you learn something and you take that with you. I failed so many times, but from all of those failures, I was able to use them, and learn something. Failure is ok; quitting is not. Quitting can become a habit.”
Chris never stopped dreaming, even when those dreams took a slightly different path, or were sometimes shattered by circumstances. “I think a lot of times, people are afraid to try. They are afraid,” he says. “Having a mother who told me every day that you can do, or be, anything is why I’m sitting in this chair right now. It’s why I’m doing everything I’ve done in my life.”

I want to help create the next Chris Gardners, and they’re all around the world. The universal dream, this whole idea you can do, or be, anything.

Humility aside, there’s no doubt Chris is a very savvy operator with finely tuned antennae picking the best brains in the business, including those of friend and financier Sandy Weill. “He told me to never be afraid of hiring people smarter than you. But remember, just because they are smarter, doesn’t mean they get to make more money,’’ he laughs. “Ok? And never forget that!”

It’s been four years since Chris lost the love of his life and partner of 20 years, Holly Ann Norwick, to brain cancer. Her death at 55 forced him to re-evaluate his life and channel his grief into creating his next chapter. He left Gardner Rich and now spends most of the year travelling the world as a motivational speaker. He’s also passionately committed to raising awareness of global homelessness. 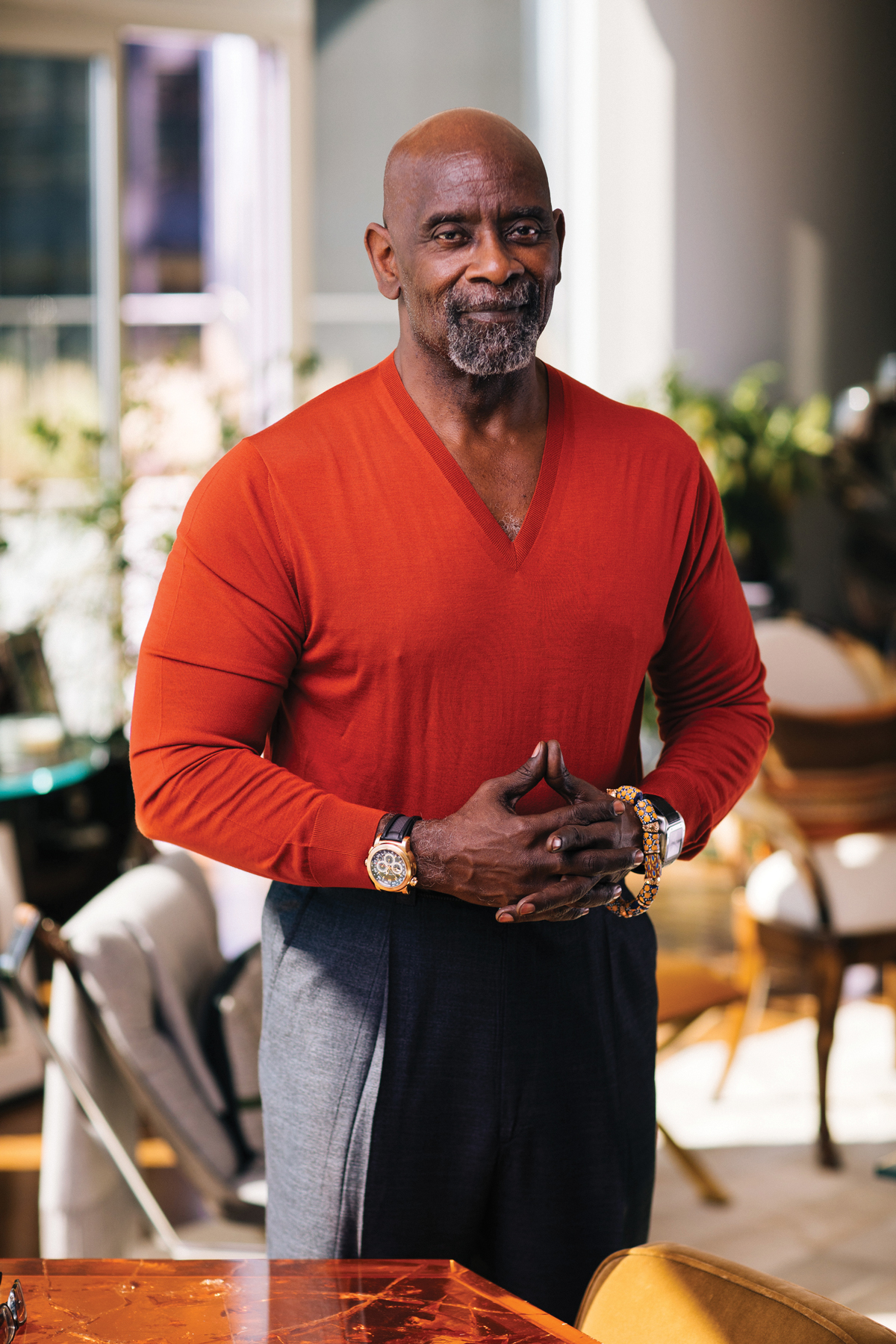 Chris is indeed a survivor, an ordinary man with extraordinary dreams and determined plans to make them come true. He is also undeniably world-class, both professionally and as a parent and now as a besotted grandfather.

“I know what it means to grab your child, with everything you have on your back, and your dream and run to a place where there’s peace,” he says.

“The first thing I think we can all do is we can be more humane in our view of who these people are. The truth of the matter is 1 per cent of the entire population of human beings on the planet, right now, is on the run. They are running from wars, conflicts, revolutions in the Middle East. They are running from gangs in Central America. In Africa they are running from climate change and desertification. They are all running. And they’re called these names, they’re called migrants, immigrants. In one country I’m told they’re called infiltrators. I have a name for them too. I call them survivors.”
Chris is indeed a survivor, an ordinary man with extraordinary dreams and determined plans to make them come true. He is also undeniably world-class, both professionally and as a parent and now as a besotted grandfather. But does he still dream? Is there something else he wants to achieve?“I am so focused right now on a couple of things,” he says. “I want to help
create the next Chris Gardners, and they’re all around the world. The universal dream, this whole idea you can do, or be, anything.” Of course there’s also a strong Plan A in play. He’s partnered with telecommunications giant AT&T, roaming the world and spreading a global message in just two words.

“Agility Is,” he says. “Agility is passion and perspective. We’re trying to mentor small-business owners and entrepreneurs. I can think of nothing better that I would like to do with my life right now than to see other people do what I do. And it can be done.” Chris beams his wide, easy smile, willing you to believe that nothing’s impossible. All it takes is permission to dream, and a good Plan A. Or two.

Chris spoke at the World Business Forum in 2016. For details on the 2017 event, visit wbfsydney.com