Brazil is a place that incites adventure, wonder, and limitless opportunities, especially if you are one of the Unstoppables. 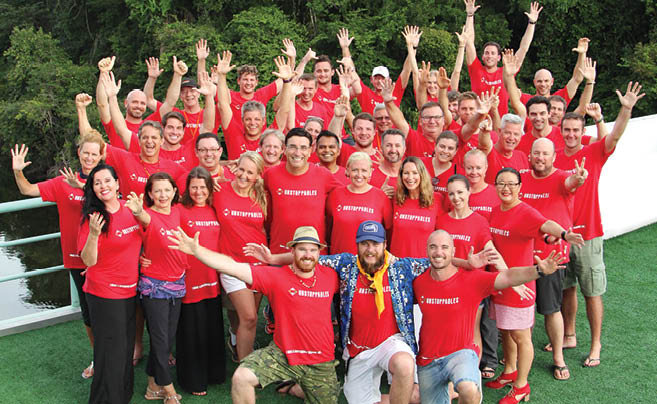 In 2015, 106 of Australia’s most influential business minds embarked on a voyage to the icy-cold climes of Antarctica. Amidst this awe-inspiring environment, they participated in the ultimate ‘think tank’ experience and collectively created new businesses, funded innovative ventures, and worked to help solve the economic, social, and environmental issues facing the world.

For the 2016 think tank, the concept was ramped up a notch, with the Unstoppables exploring the thriving vastness of the Amazon rainforest and taking part in Rio de Janeiro’s electrifying Carnival. Everyone on the journey was pushed out of their comfort zone and encouraged to think about radical ideas that could enhance the future of Australian business.

I was one of the 44 adventure-seeking entrepreneurs, investors, and corporate leaders who signed up for the life-altering 2016 Unstoppables tour, appropriately titled ‘Ideas Gone Wild’. The sense of anticipation was as thick as the humid air when the next wave of Unstoppables arrived at the Tropical Hotel in Manaus, northern Brazil, on 31 January. We were transferred by boat to the floating Amazon Jungle Palace, which would serve as our business base. From here, we would explore Rio Negro—the largest left-side offshoot of the Amazon River, the Meeting of the Waters, and the wonderful biodiversity of the Amazon rainforest.

Julio De Laffitte—the self-made multimillionaire who founded the Unstoppables movement as a networking opportunity to promote entrepreneurial thinking—welcomed us all to Ideas Gone Wild. He shared his vision for the next 10 days and what he hoped would result from it. He had high expectations—and rightly so, because after the Antarctica voyage, AU$15 million was invested into companies, and more than 25 per cent of participants were successful in gaining investment into their business ideas. Furthermore, over two-thirds of attendees formed a business while on the Unstoppables boat—some, multiple businesses—and more than 98 new ventures and concepts were formed. “One of the crucial facts that arose from our inaugural journey was that 70 per cent of people who sought sponsorship, mentorship, and joint ventures got them,” Julio shared. “That’s incredible.”