An accountant by training, Prasanth Manghat knows more than most that you can’t put a price on life’s most valuable moments. After all, he’s witnessed a few. “A man who recovered from 5 coronary bypass grafts to complete a 10-kilometre stretch of the Dubai Marathon; a patient who suffered a paralysing stroke but fully recuperated and trekked to Everest Base Camp; a baby born at 23 weeks, weighing 700 grams who is now more than a year old and leading a healthy life.

All these cases make us realise the significant impact that we have on the lives of our patients,” the CEO and executive director of NMC Healthcare says. His previous life in corporate finance may have been dominated by balance sheets and bottom lines, but Prasanth has quickly adopted the mantra of company founder, Dr BR Shetty. “He has always emphasised the importance of looking at the patient’s pulse rather than purse,” he explains. 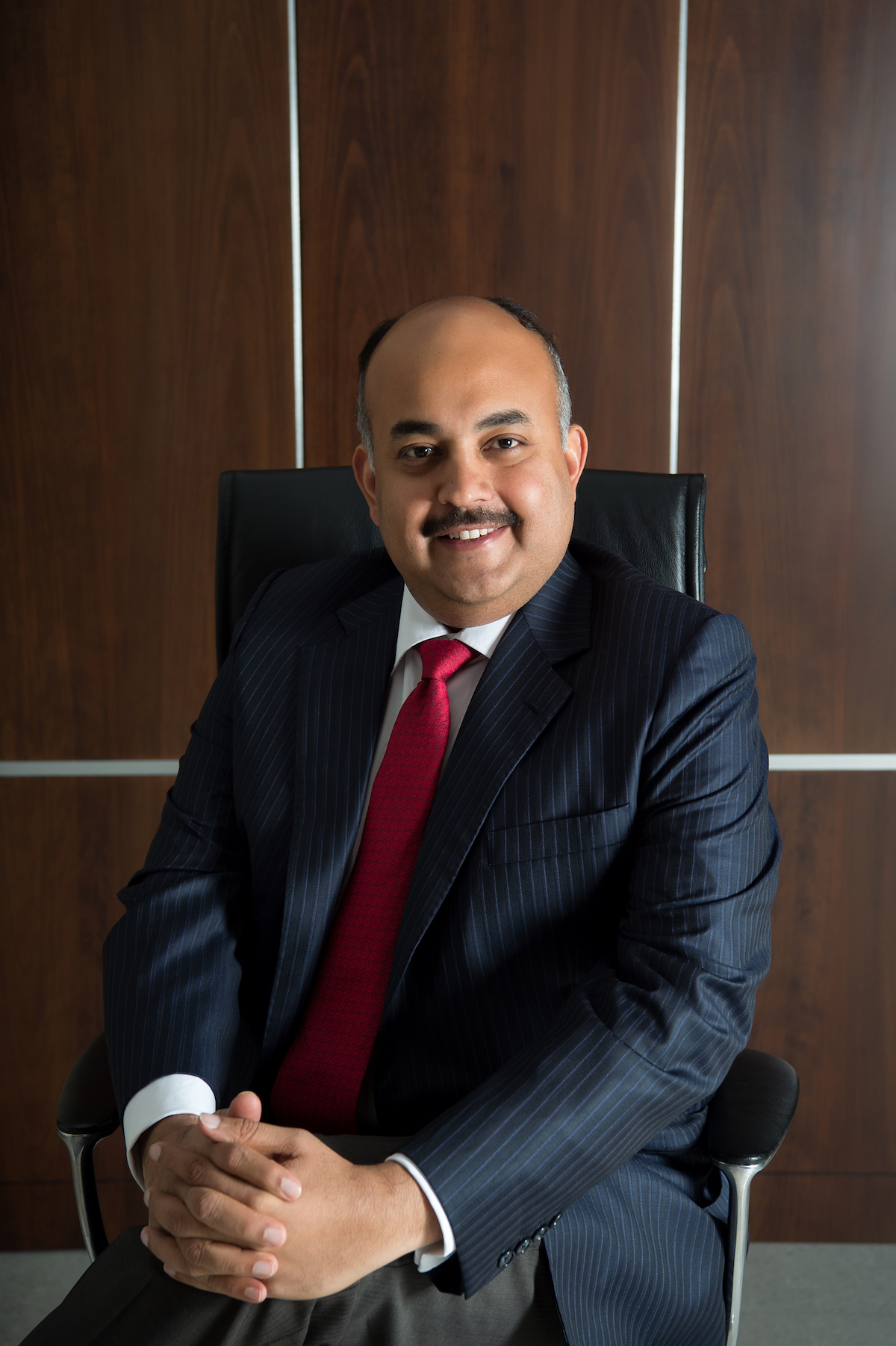 It’s a philosophy that drives NMC Healthcare as it works to bring healthcare closer to the people. From humble beginnings in 1975 as a standalone clinic and pharmacy in Abu Dhabi, it has developed into a multinational organisation with a presence in 8 countries across 3 continents, offering a wide spectrum of services across the continuum of care. In the UAE alone, its hospitals and medical centres treat more than 3 million patients each year.

Recognised as pioneers in private healthcare in the Emirates, Dr Shetty and his wife, Dr CR Shetty, are today CEO and group medical director of NMC Healthcare respectively. The opportunity to work with such illustrious names was what, in 2003, drew Prasanth away from his previous role with Kotak Mahindra Finance in India.

“I started out as finance manager at one of Dr Shetty’s other business interests, Neopharma,” he says. “Be it healthcare, education or remittance, his businesses have been driven by an overarching commitment to serve the community. An astute businessman and entrepreneur, Dr Shetty has been able to create a successful portfolio of businesses while staying committed to his principle of serving the nation. The offer to work under such a visionary was one that I could not refuse,” he says.

It is obvious from speaking with Prasanth that everything they have achieved together is only the beginning. “We have a clear ambition. Over the next few years, we want to grow and become the top name in every single city in the Middle East,” he says. The first steps were taken 5 years ago on foreign soil. NMC Healthcare successfully floated on the Premium Segment of the London Stock Exchange in 2012, the first UAE company to do so. Company CFO at the time, Prasanth was instrumental in the campaign. “Our IPO in 2012 has been a significant milestone in NMC’s journey towards becoming an organisation with global reach and international repute.

Not only did we raise £117 million, but it also brought about a significant change in culture and strategy with the company that had hitherto been a privately owned business,” he explains. He admits that achieving the listing within 100 days of initiating the IPO process was an ambitious task, one that required him to often voice potentially unpopular logic. “It is the lofty goals that make CEOs dreamers, always looking at the future and aiming for the stars. As a CFO, we have to live in the real world and ensure that these dreams are based on firm realities and that there is an action plan in place to achieve them,” he says. 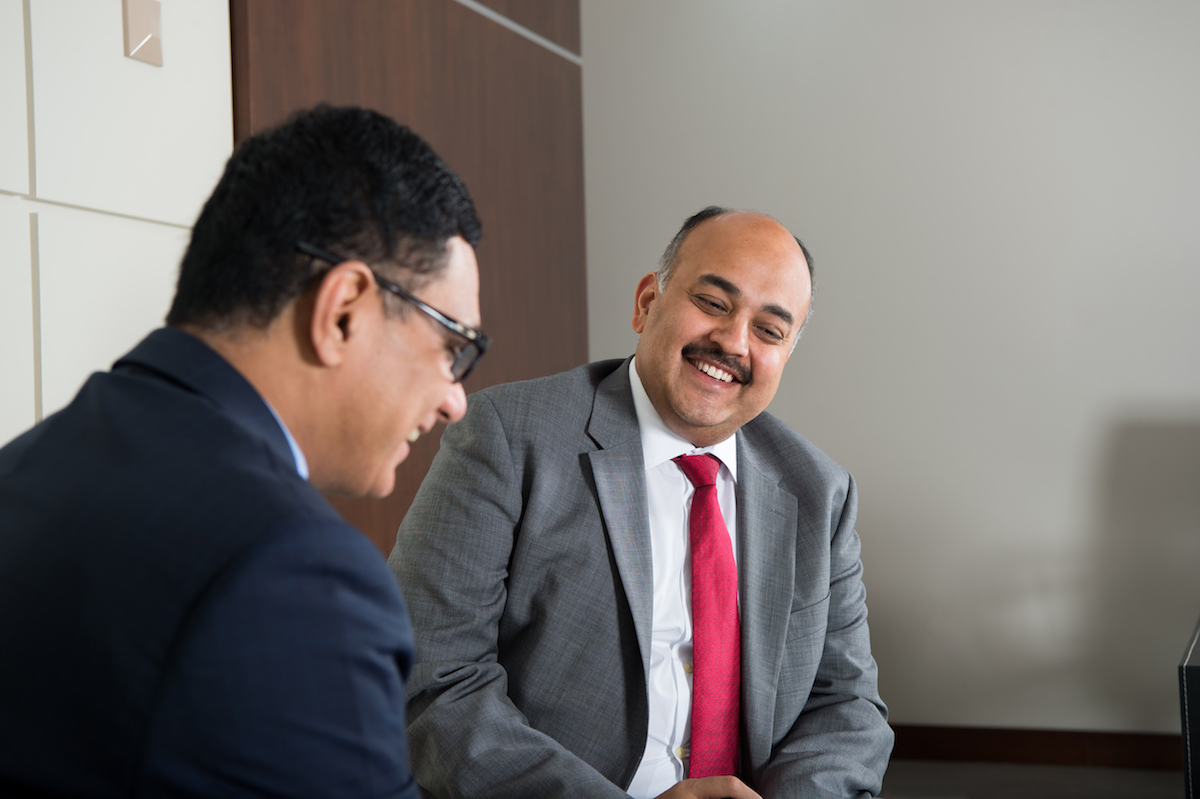 “We have a clear ambition. Over the next few years, we want to grow and become the top name in every single city in the Middle East.”

A period of tremendous growth

The rewards, however, made all the hard work worthwhile. “With the money we raised from the IPO, we were able to pursue a capacity-building strategy, setting up several new facilities around the UAE to create a nationwide hub and bespoke multispecialty network. With this came the establishment of Abu Dhabi’s first women’s hospital and the expansion to Mohammad Bin Zayed City, Dubai Healthcare City, Dubai Investments Park, Sanaiya Al Ain and Khalifa City, where we opened the NMC Royal Hospital, the largest private hospital in the UAE.

At the same time, significant investment was made in strengthening existing operations, and building strong relationships in the industry and with global investors, regulatory agencies, and internal stakeholders,” he says. In recognition of his efforts, Prasanth was awarded CFO of the Year in 2012 by the Institute of Chartered Accountants in England and Wales (ICAEW), Middle East.

Since his appointment to deputy CEO in 2015 and promotion to CEO in early 2017, Prasanth has played an instrumental role in what he labels “a period of tremendous growth.” The figures more than back up his assertion. “We have grown from a US$550-million company in 2012 to become a US$4.5-billion organisation in 2016.” Coinciding with his promotion, 2015 marked a veritable inflection point in the trajectory of NMC Healthcare. “We shifted our focus to capability enhancement,” he explains.

The acquisition of 4 companies followed: ProVita, the pioneer for long-term care in the UAE; Americare, a leading provider of home-based health services; Fakih IVF, the regional leader for infertility treatment in the UAE; and Dr Sunny Medical Center, an existing network of multispecialty clinics and pharmacies in Sharjah. “We have also expanded internationally, with the acquisition of Clinica Eugin Fertility Clinic in Barcelona, Spain, and we now have footprints in Italy, Denmark, Brazil and Colombia,” he says.

Most recently, NMC announced the proposed acquisition of Al Zahra Hospital in Sharjah for US$560 million, funded by new equity placement of up to 9.99% of the issued share capital amounting to US$325 million and a debt facility of US$1.4 billion. The acquisition adds one of the largest and oldest private hospitals in the UAE to the NMC network and helps accelerate NMC’s presence in the growing Sharjah healthcare market. 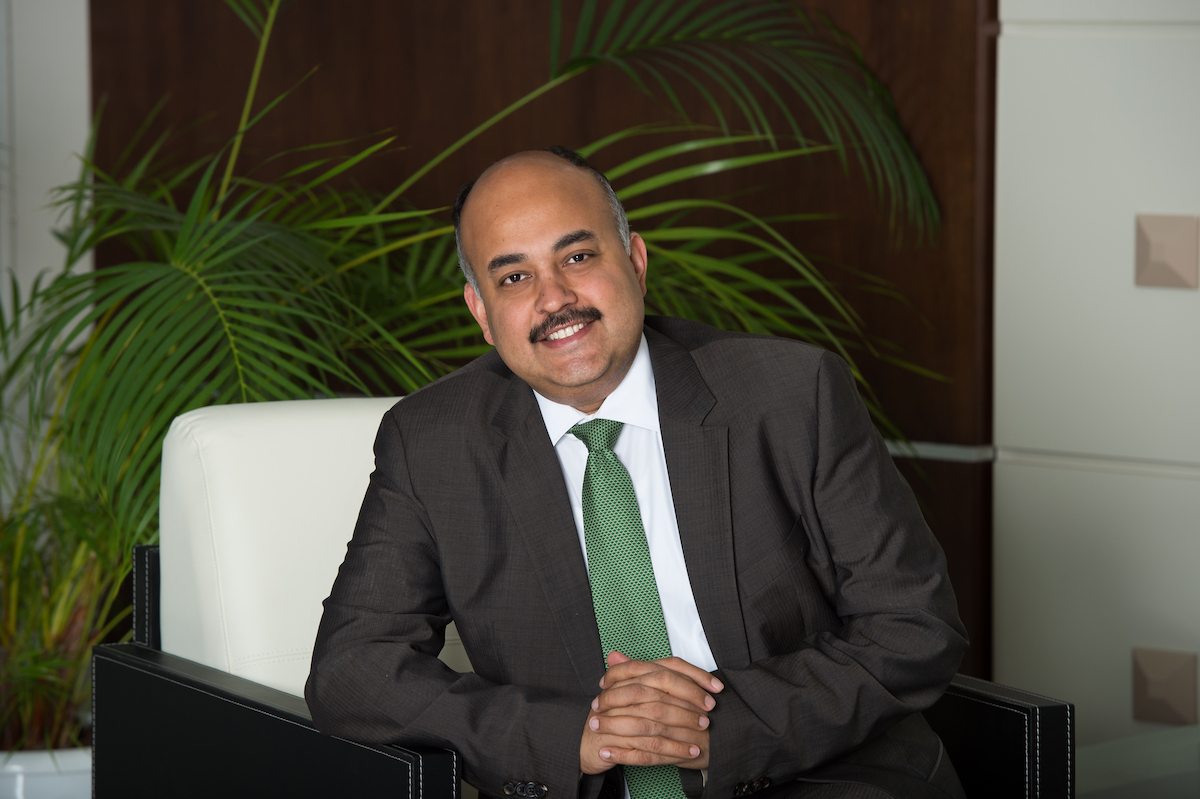 Aware that “the temptation is there to remain in the comfort zone of your role, but unless you venture out of it, see the big picture, and understand how the industry works globally, it is difficult to grow,” he admits that some of the biggest challenges of his career have been encountered during acquisitions. “One of the most prominent pitfalls is not anticipating the likely challenges to the regulatory scenario,” he cautions.

“These changes can completely alter the future outlook of your business.” Prasanth is talking from recent experience. “Clinica Eugin would receive patients from Italy for IVF treatment, as egg donation was prohibited there,” he recounts. “Immediately following our acquisition, however, a regulatory change in Italy reversing the ruling meant that Eugin’s Italian patient base was threatened.”

The solution? “By developing a good understanding of the European fertility market, we were able to anticipate the change and develop a response to it by opening our facilities in Italy. Eugin was at a distinct advantage due to its large egg bank in Spain, developed over many years.”

Although transporting eggs across countries is restricted, embryos are allowed. So Eugin sent sperm samples from Italy to Spain where the eggs were fertilised and then returned. “Eugin was able to offer the quickest turnaround time, while patients at other Italian clinics had to wait for suitable donors. Our ability to foresee change and mitigate associated risks has turned Eugin into Italy’s leading fertility provider as well.”

This global experience will be crucial as the company looks to cement its position in the UAE and grow in the region over the next few years. “In line with our corporate strategy of selectively establishing a presence outside of the UAE, we are leveraging our capabilities in single-specialty verticals, such as long-term care and fertility treatment to expand our market in the GCC.

The expertise of brands like ProVita and Fakih IVF, coupled with their scalability and less capex-intensive models, provides the right avenue for us to establish a presence outside the UAE.” Saudi Arabia, the largest GCC market, marks its maiden foray into the region. “We are developing long-term acute care and rehabilitation facilities in the eastern and western Provinces.” Plans are also well underway to bring its fertility care operations to Qatar and Oman. 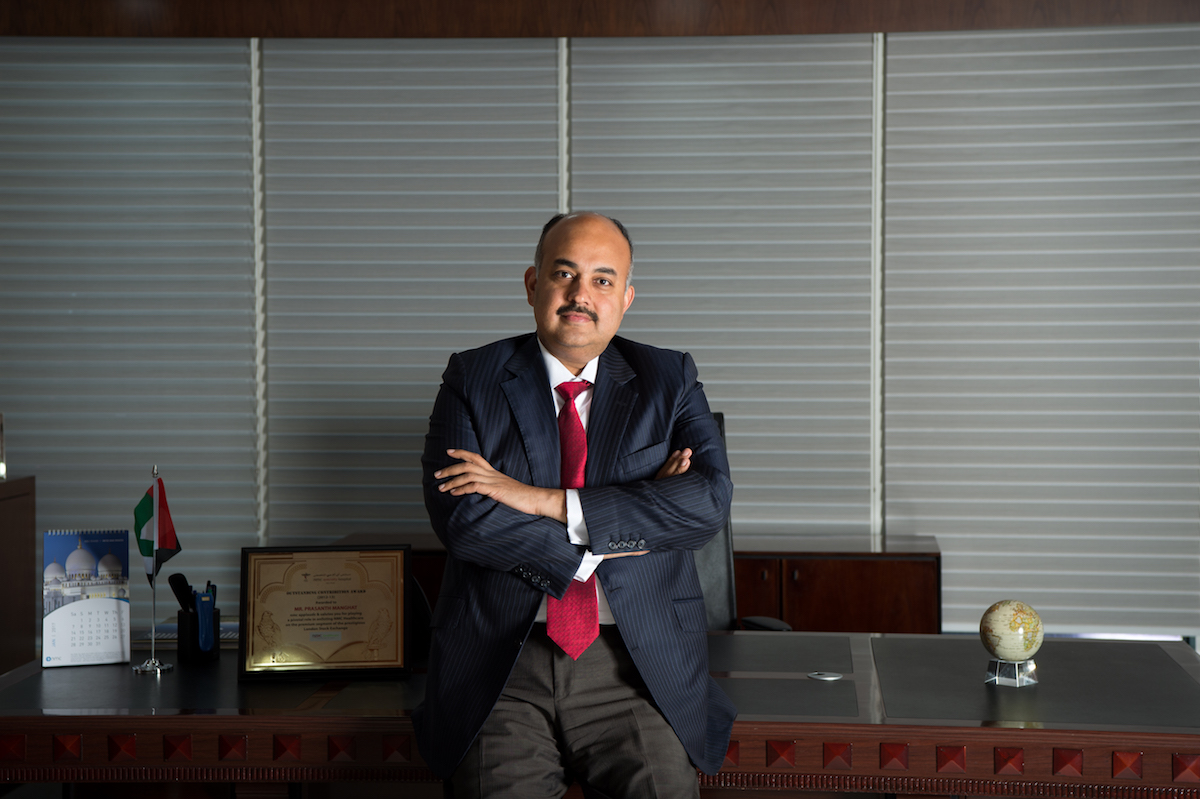 NMC Healthcare is also betting on the potential of Dubai to become the health tourism hub of the world and is partaking in what he refers to as “healthy competition from most healthcare companies to establish ourselves in the market.” According to Prasanth, medical tourism is projected to bring 500,000 visitors a year to Dubai by 2020 as the city positions itself as the market leader for elective treatments in niche specialties.

“Dubai already is a globally renowned tourist hub and has an impressive range of premier accredited hospitals and over 35,000 healthcare professionals from 110 countries. The presence of a strong government ensures quality healthcare from strict regulations and, importantly, it is able to offer the best in healthcare in an environment that is culturally sensitive,” he says. “We believe we are well positioned to benefit from this surge of medical tourists through our expanded network in Dubai and specialised offerings in fertility treatment, cosmetic dentistry, cosmetic plastic surgery, ophthalmology, dermatology and orthopedics.”

Dubai may be, in Prasanth’s opinion, “the ideal destination for medical treatments”, but across the GCC, NMC Healthcare is positioning itself to challenge for the very same title. 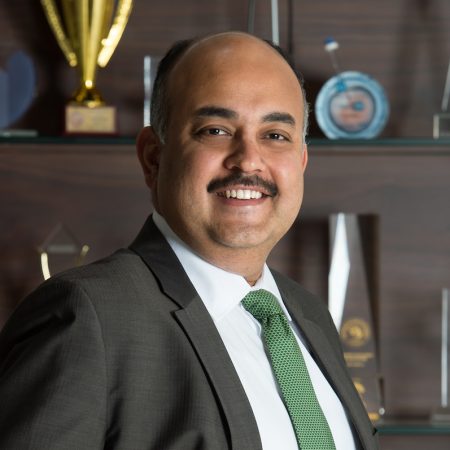