Athens: Revelling in its Ottoman past

The Greek capital is embracing its Ottoman past, restoring and reviving some stunning architecture. 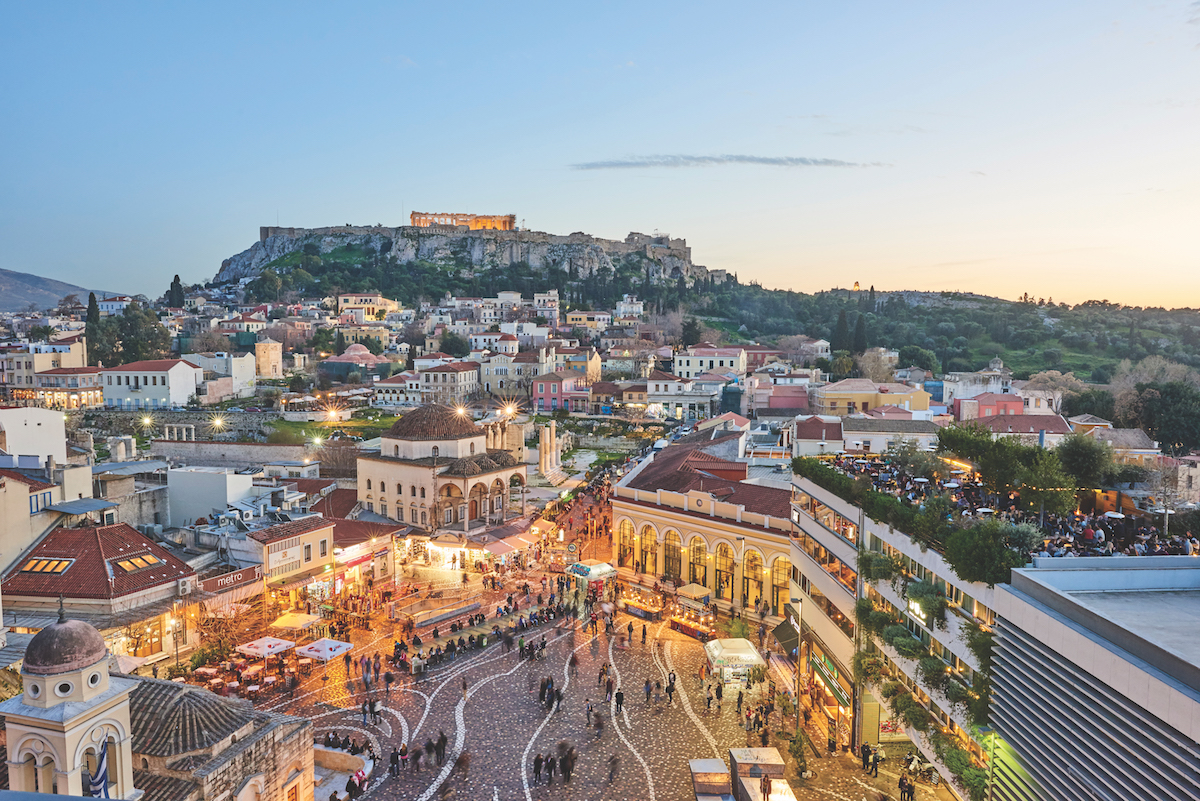 Sitting in a domed hammam wearing a traditional red-and-white peshtemal towel around my waist, I’m trying to endure the intense steam. Next to me stands a marble basin with two taps, one for hot water and one for cold. I run both, let them mix to the right temperature, pick up a silver-plated bowl and use it to splash myself.

After 30 minutes of this, a muscular, bearded bath attendant practically hurls me on a marble slab for the ‘Ali-Mama’ treatment. I get rubbed down with a loofah so that every dead cell – and a good fraction of live ones – is peeled off my skin. I get soaped, beaten with a wet towel, and have my joints forcefully stretched a few cracks short of fracture. 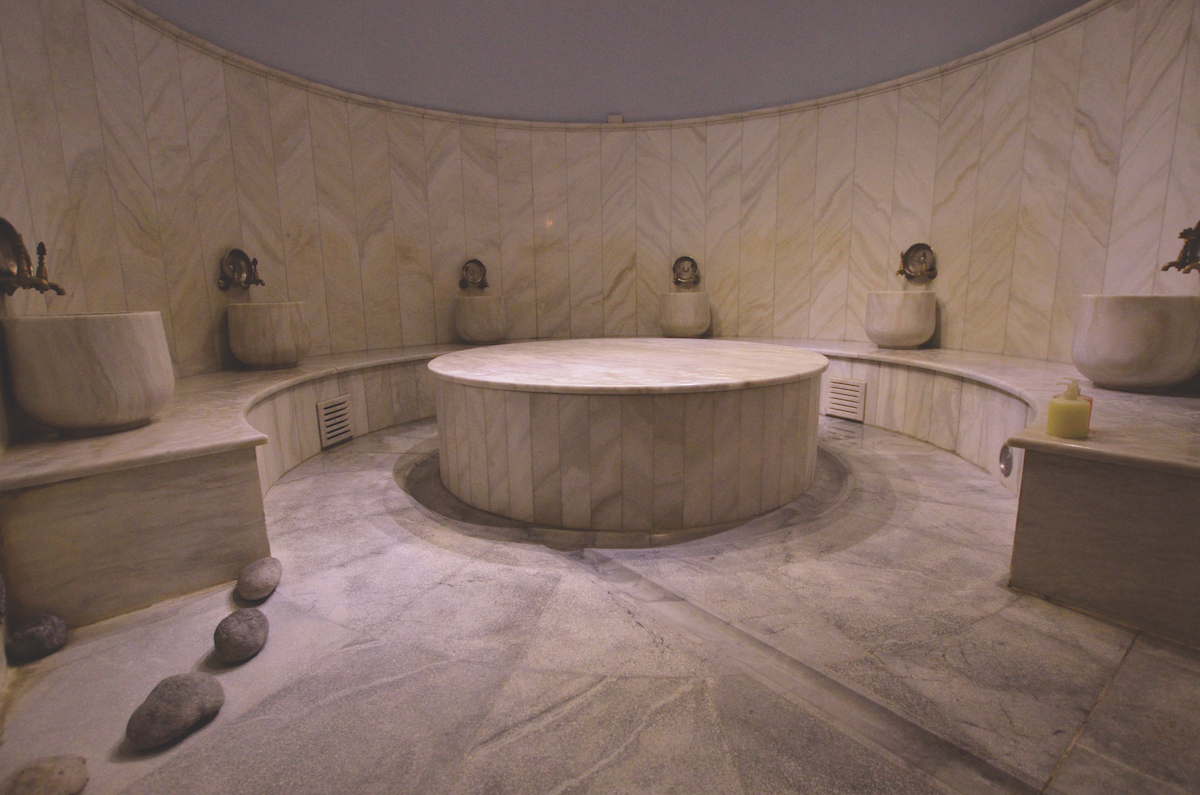 Afterwards, I drink bitter hibiscus tea while recovering on a sofa in full glow. It all sounds typical of a Turkish hammam experience except that I’m not in Istanbul, Izmir or Ankara, but next to the ancient cemetery of Kerameikos in Athens. Naya Kourti from Chania in Crete, an architect by profession and an orientalist by inclination, opened the hammam after realising that there were no Turkish baths operating in Athens anymore.

Simply by word of mouth, without any advertising at all, people came and the hammam became a roaring success.  A few blocks away from this locale rises the Benaki Museum of Islamic Art, housing the private collection of Antonis Benakis, scion of a Greek family from Alexandria who made their fortune in textiles (the joke goes that they were ‘cotton-rich’).

Given the geographical position and history of Greece, it comes as no surprise that this museum is considered the best of its kind outside the Muslim world. The highlights of its four rooms run the full gamut of Islamic art: a brass astrolabe from 1792; Iznik ceramics with flower designs of exquisite beauty; intricate Qajar jewellery from Iran in gold, silver, ivory and mother-of-pearl; Fatimid lustre pottery from the eleventh century; and a stunning reception hall from a seventeenth-century Cairo mansion, complete with fountain and inlaid marble floor.

Although modern Greek culture owes a tremendous amount to its 400-year-long Ottoman occupation, Turkish–Greek relations have been a veritable powder keg for many decades, with every thaw followed by a freeze, occasionally erupting in hostilities. Yet whatever the political status quo, the vestiges of Ottoman past still loom conspicuously in the contemporary Greek capital. 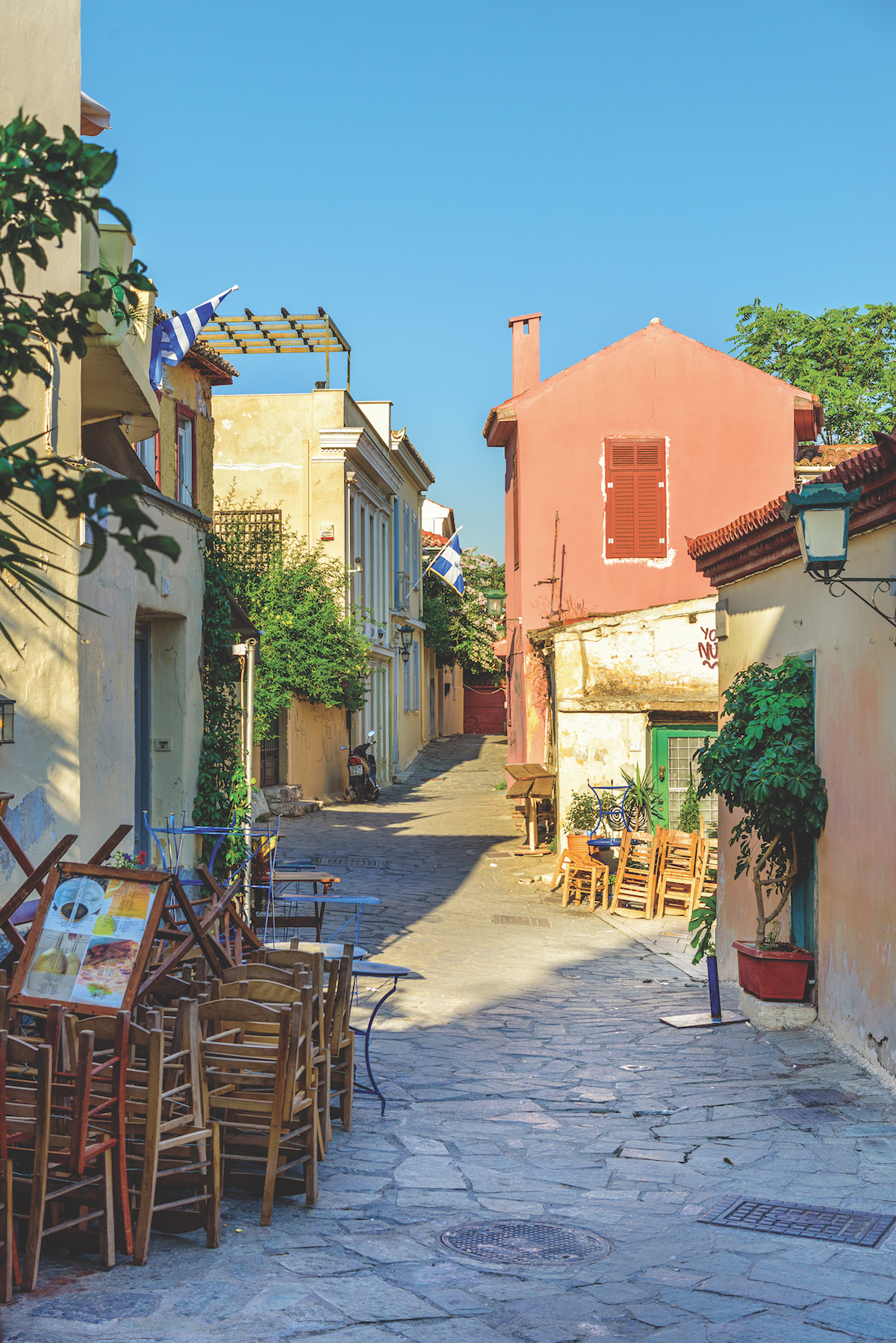 Nowhere are they more prominent than outside the gates of Monastiraki metro station. This was the lower bazaar in Ottoman times and at a cursory glance little has changed. On my left, the sign proclaiming the entrance to the ‘Athens Flea Market’ leads not to stalls full of second-hand goods but to a street scene straight out of Cairo or Marrakech.

This is where tourists shop for leather goods and jewellery, although most Athenians come for the army surplus garb; you can buy almost anything here, from a SWAT suit to a functioning gas mask. Small stores line the road and branch out in covered galleries, their owners touting for business in full Middle-Eastern souk mode: there are collectors’ coins, handcrafted shoes, leather suitcases and decorative ceramic plates.

At Abyssinia Square, an Aladdin’s cave of antique shops, there are scores of second-hand bookshops in which to lose yourself.  On the other side of the square, I cannot but marvel at the giant silhouette of the Tzistarakis Mosque, now a pottery museum. Built in 1759, it has survived the demolition of other mosques after Greek independence, possibly because of the shops sheltering underneath its bulk. 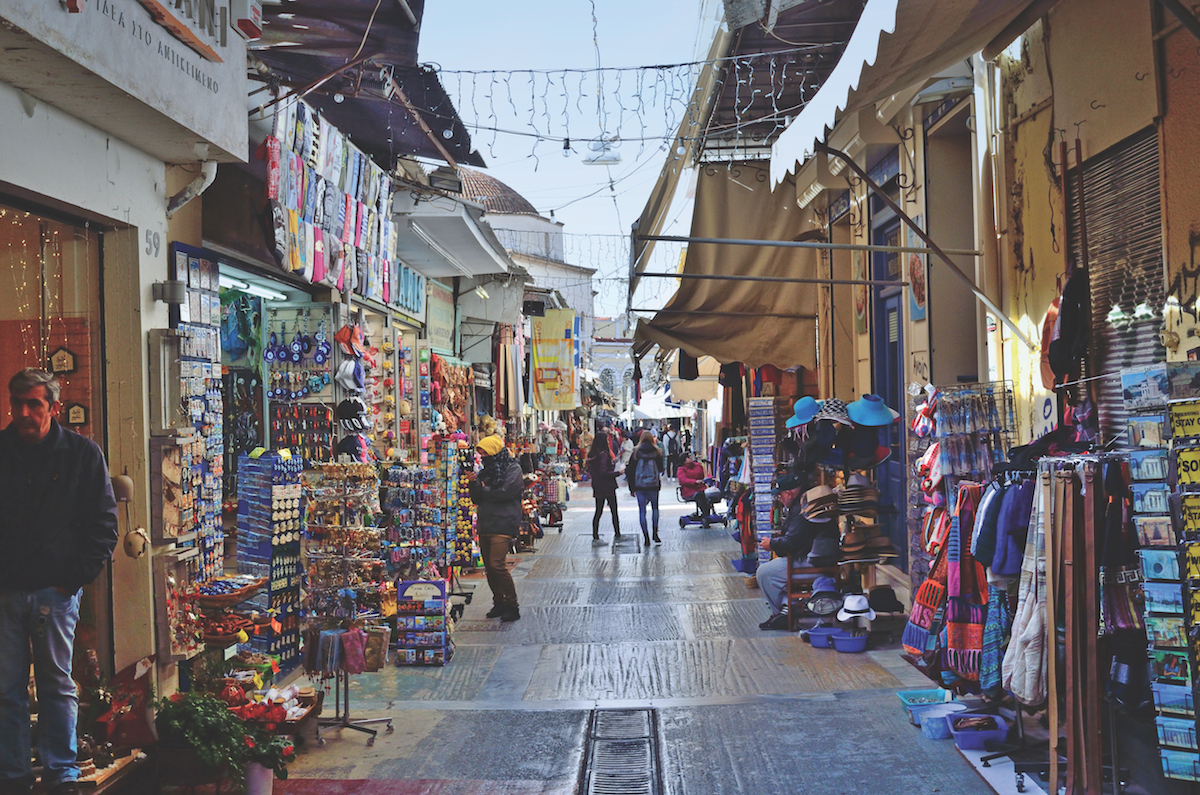 Most sell souvenirs for tourists, but they used to be artisan stores in a former life. The one closest to the mosque gate has been renowned for generations for housing the foremost knife-makers in Athens – until recently. I can just about get a hint of its past from the selection of Swiss Army knives and US Navy blades on display.

I walk from the mosque up towards the Acropolis in streets smelling strongly of jasmine and bergamot, and reach the Roman forum, paid for by none other than Julius Caesar. This was the buzzing centre of town during the Ottoman era, but it’s been cleared for excavations and is now one of the quietest areas in the city, a neglected gem even at the height of tourist summer. Yet here, behind the imposing Roman gate and among the orange and cypress trees, rises the large, Byzantine-style Fethiye Mosque.

It was built in honour of Sultan Mehmed II, the Conqueror of Constantinople on the occasion of his visit to Athens in 1458. He was suitably impressed by the display of architecture at the Acropolis and famously declared all ancient ruins the property of the Sultan – which is why Lord Elgin had to obtain a firman from the Sublime Porte, the central government of the Ottoman Empire, to loot the Parthenon. 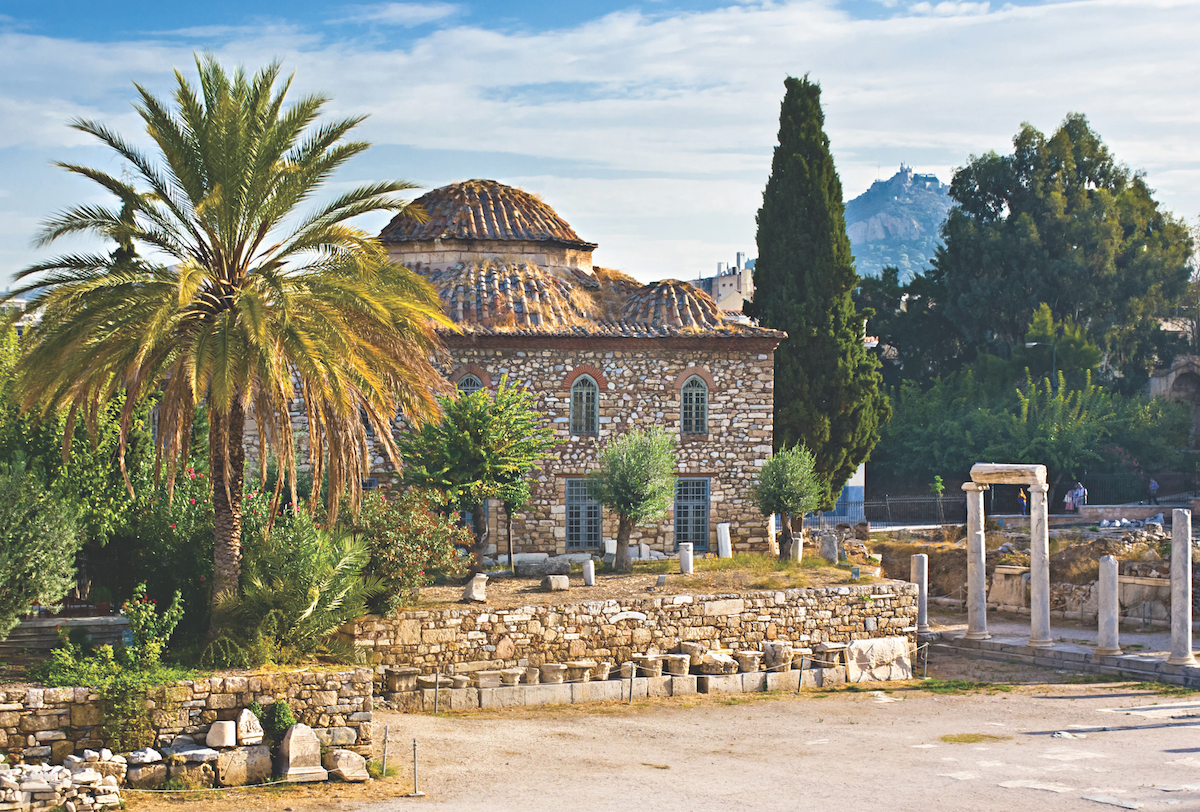 Marking the end of the Roman forum stands the Tower of the Winds or the Horologion of Andronikos Kyrrhestes. This octagonal marble curiosity from the first century BC bears eight sculptures representing the winds emanating from the eight compass points.

It served as a ‘takiyyah’, a monastery belonging to the Sufi order of the Whirling Dervishes who used it as their headquarters, spinning wildly every Friday. Opposite, feral cats patrol the perimeter of the Athens medrassa, the highest Muslim religious school during Ottoman times, now in ruins except for its northern facade.

A stone’s throw away and I’ve come full circle: at 8 Kyrristou Street, there’s an old Turkish hammam that was functioning in 1667 when the Turkish traveller Evliya Çelebi arrived in the city. It was famously used in 1802 by Lady Elgin during her husband’s controversial sojourn in the city. She was mightily shocked by the party jaunts inside; there was far too much female singing, dancing and carousing for her liking. 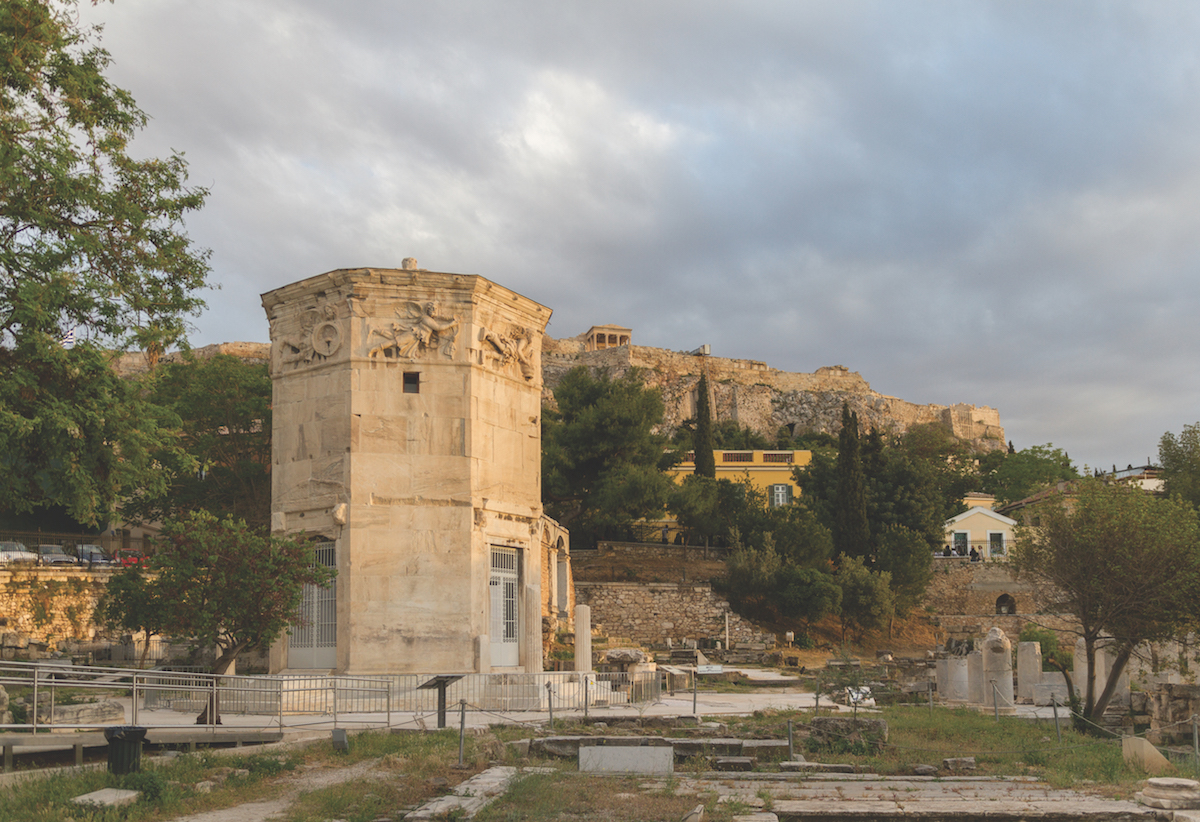 Tower of the Winds

This is the only one of three original Turkish hammams in Athens still standing. Refurbished in 1870, it was in use until 1965, by which time all Athenians had their own bathrooms. It’s been turned into an atmospheric museum, displaying separate sections for women and men, as well as a Jewish division and a ‘European wing’, which effectively translates as ‘a room with a bathtub’.

Making my way towards the tourist hub of Plaka, I have a final peek at the three-storey building at 5 Scholeion Street, protected by a small iron gate and surrounded by ubiquitous graffiti tags. With its small windows and its unusual chimney – typical Ottoman features – the house gives the impression of a tower.

This is the best-preserved Ottoman house in Athens, dating from the eighteenth century and used for most of its existence as a police post. In the 1840s, it was sold to Sir Richard Church, an Irish general from Cork who fought alongside the Greeks in the War of Independence and settled here until his death in 1873; because of this, it’s called the Church Tower, confusing some passers-by who strain their necks to spot the church.

The Church Tower is due for refurbishment soon. The Islamic Art Museum was inaugurated in 2004, Naya’s Hammam opened in 2011, and the Fethiye Mosque reopened its doors after a proper, careful restoration in 2016. It seems that modern Greeks are confident enough and willing at last to fully dig up and examine the Ottoman component of their past.

John Malathronas is a versatile travel writer and photographer who speaks several languages fluently, is highly active in social media, has authored or co-authored 15 books and written for CNN Travel, National Geographic Traveller, The Sunday Times, Rough Guides and many more.