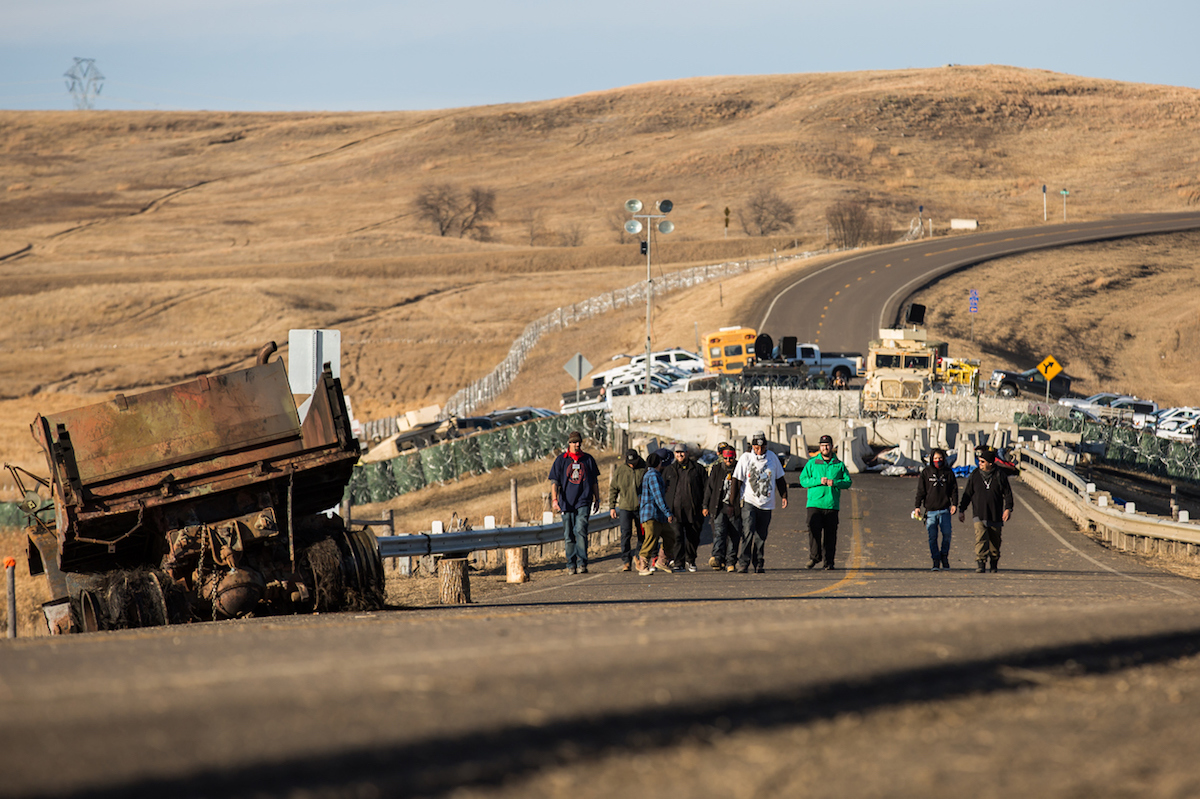 December the 5th is the date set by the US Army Corp Engineers for the Dakota Sioux and their followers to get the hell out of the road, or else. None of the thousands standing their ground have any doubt about what may be in store for them.

Since April, the Standing Rock Sioux have been protesting the construction of the Dakota Access Pipeline, a fuel conduit intended to run from the Bakken oil fields in western North Dakota to southern Illinois, crossing beneath the Missouri and Mississippi Rivers and Lake Oahe near the Standing Rock Indian Reservation. The Native Americans argue — and not without justification — that this “black snake” will threat their water supply and the ecology of the region. The standoff has recently become violent. As of tomorrow, it could become worse.

Though the Standing Rock Protest has received an almost suspiciously small amount of airtime on mainstream news, it’s become the cause celebre of choice for actors and musicians with time on their hands, your Jane Fondas, your Susan Sarandons, your Ben Afflecks and your idiots from Green Days all over Standing Rock like flies on a sugar pig, unofficial t-shirts and music and the ubiquitous Johnny Depp giving the event all the solemnity of an MTV BBQ. 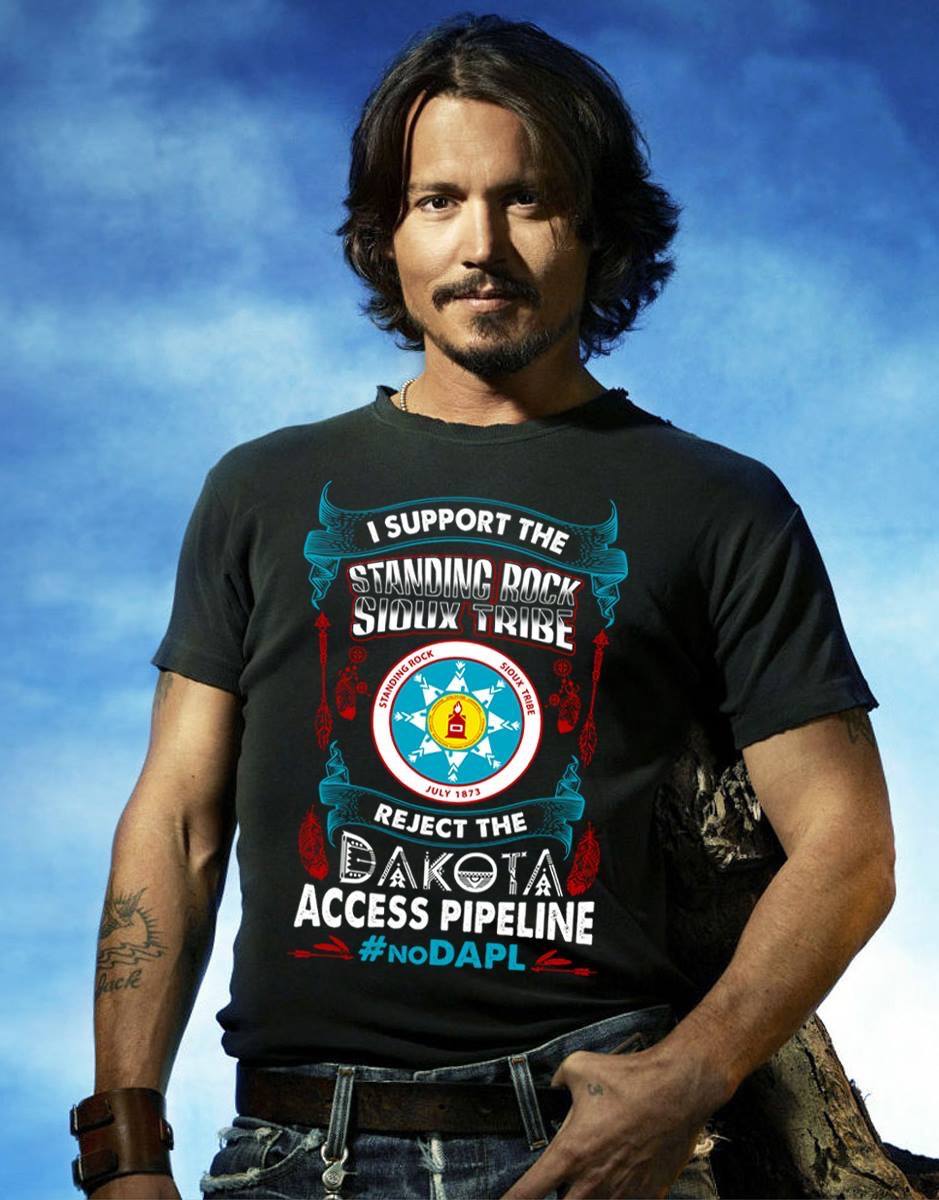 This is perhaps inevitable and probably well-meaning, but a shame; Standing Rock is one cause that has no need for celebrity endorsement, its implications so obviously offensive it’s a wonder more Americans aren’t prepared to put their lives on the line. As Graywolf, director of the Southern California chapter of the American Indian Movement, told a reporter recently: “I get tired of people saying, ‘I support you,’ … We don’t need allies. We need accomplices.”

While one could easily choose to view Standing Rock as a showdown between Corporations and The People, Right vs Left, or Fossil Fuel vs Climate Change, the critical clash is between the US Government and its Native Americans. This is not an antique story about bows-and-arrows and the Wild West, and Standing Rock is not some quaint resurrection of bygone animosities aroused for sentimentality’s sake. What we are seeing at Standing Rock is proof that the so-called Indian Wars did not end in the Black Hills of Dakota in 1890, as many historians contend, but continue to this day.

The American Indian Wars never officially ended — the Indians just stopped fighting. They did this in part because the US Government offered treaties which, while never being particularly attractive, seemed better to those who reluctantly signed them than a future with more bloodshed. It is an undisputed fact that the US has violated or broken every single one of the more than 500 treaties signed since 1778, the American Indians having seen their rights to the land of their ancestors evaporate as they’ve been relentlessly pursued onto smaller and smaller parcels of earth. 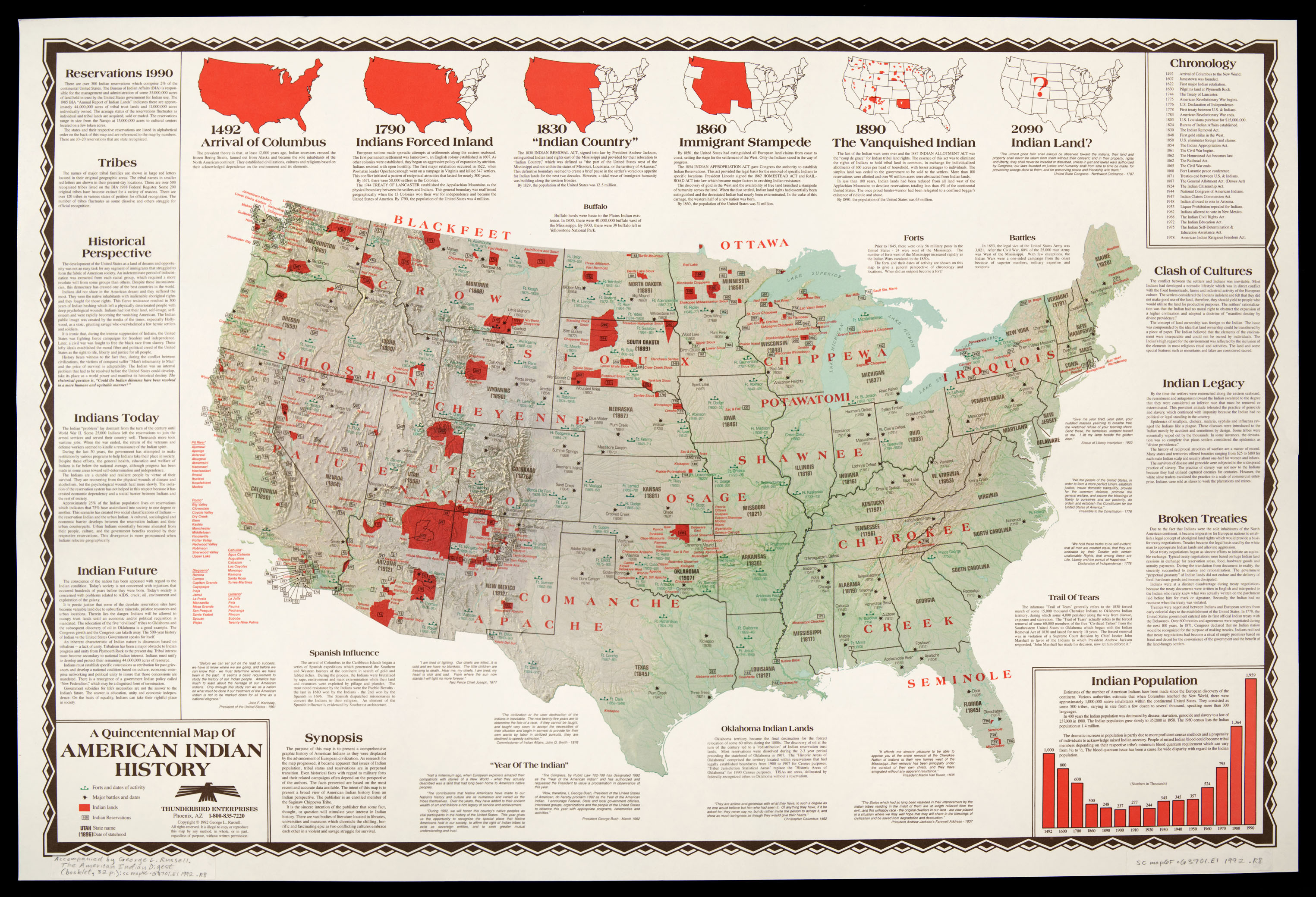 It is an undisputed fact that the US has violated or broken every single one of the more than 500 treaties signed since 1778, the American Indians having seen their rights to the land of their ancestors evaporate as they’ve been relentlessly pursued onto smaller and smaller parcels of earth.

The Fort Laramie Treaty on 1968 was one such agreement, promising the Sioux everything west of the Missouri River in South Dakota. In less than 40 years they’d had three quarters of that land taken back from them. If they lose this next battle, one could say they’ve lost the lot. 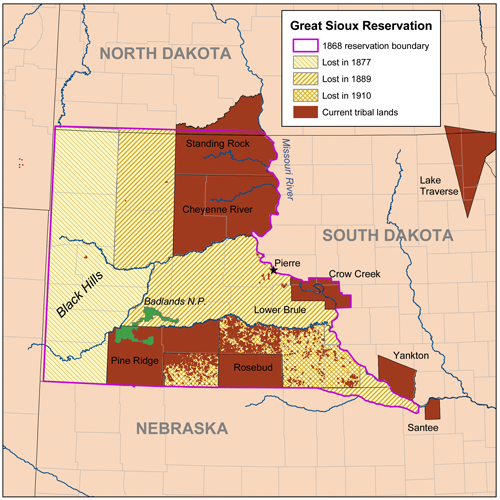 In less than 40 years they’d had three quarters of that land taken back from them. If they lose this next battle, one could say they’ve lost the lot.

The argument that the American Indians are a vanquished people who must bow to their conqueror is rubbish — there has never been an instrument of surrender (certainly not of the “unconditional” type that the US Government fancies), but rather a series of agreements that have been dishonoured by the Government time after time. It should make even the most right-wing ‘patriot’ embarrassed that the word of his beloved country is not worth shit.

In the later part of the 20th century, presidents became slick at acts of “reconciliation” as the relationship between America and its Native People entered something of a post-Hollywood phase.   In 2009, Barack Obama almost whispered an apology “for the many instances of violence, maltreatment, and neglect inflicted on Native peoples by citizens of the United States” (note the apology is on behalf of “citizens”, not “the Government”), and in 2014 actually visited Standing Rock as the first sitting President to officially call on an Indian reservation. But all of this ‘revision’ will be revealed as rot if the Army moves in on the Sioux at Standing Rock. Obama himself, in stopping short of putting a halt on the Dakota Access Pipeline, might tarnish his own legacy for good.

As the New York Times’ Timothy Egan pointed out on Friday, the behaviour of the Federal forces at Standing Rock is in ugly contrast to their comparatively respectful treatment of the Bundys, a family of white farmers from Oregon who openly threatened authorities with “war” during an armed stand-off in 2014. The Feds backed off like ninnies from the Bundys, who, having raised their own private militia, were fighting for their “right” to graze cattle on public land that in no way belonged to them (if anyone, it most probably belonged to Paiute Indians), and it wasn’t until February this year, when these morons attempted an armed takeover of a National Wildlife Sanctuary, that authorities finally decided to enact their arrests.

Compare such reverent treatment to the reckless offensives launched against the Sioux at Standing Rock, who’ve been blasted with tear gas, pepper spray and rubber bullets, sprayed with torrents from  water cannon in sub-zero temperatures and subjected to the teeth of attack dogs in scenes reminiscent of an America that everyone had hoped was gone. 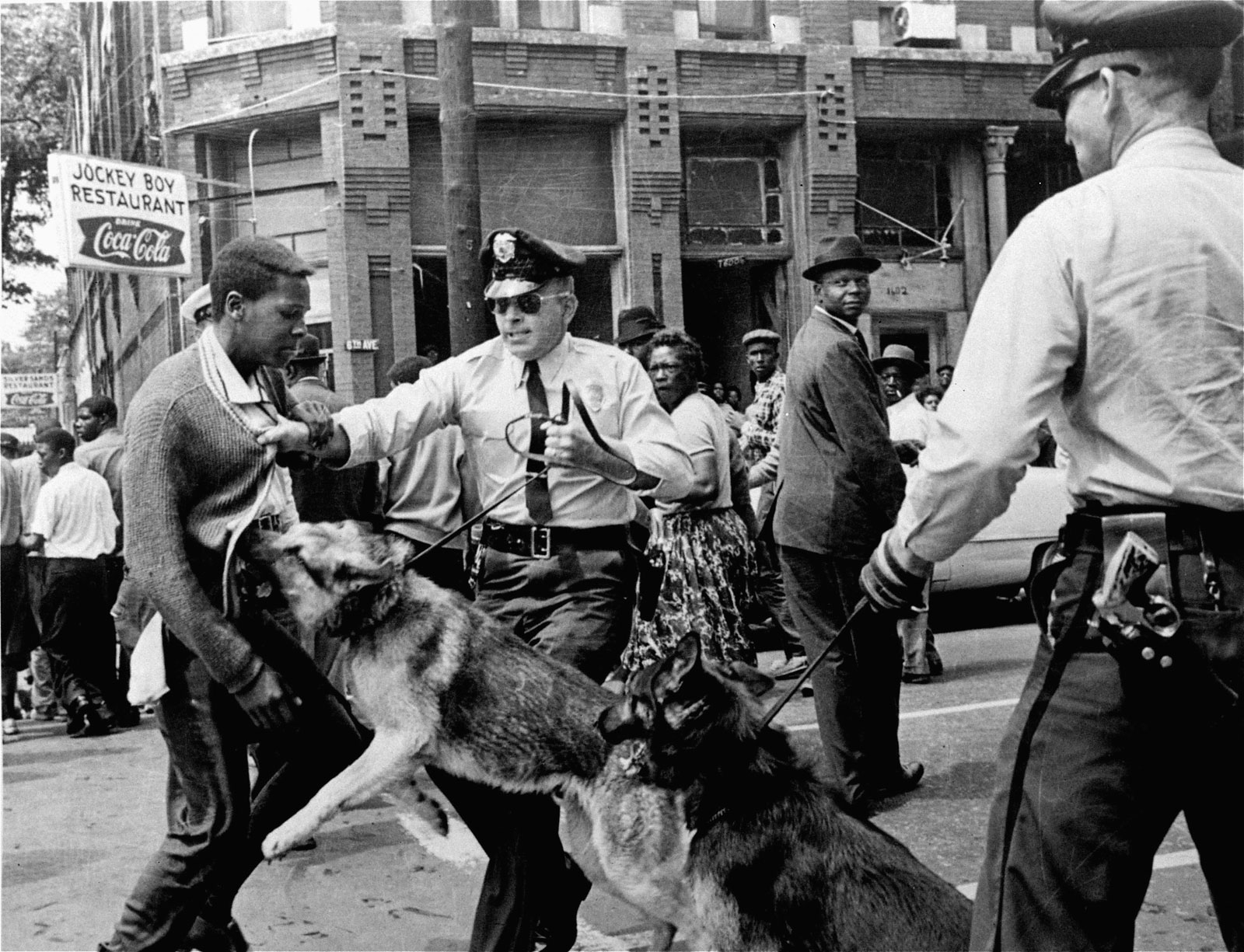 Compare such reverent treatment to the reckless offensives launched against the Sioux at Standing Rock, who’ve been blasted with tear gas, pepper spray and rubber bullets, sprayed with torrents from water cannon in sub-zero temperatures and subjected to the teeth of attack dogs in scenes reminiscent of an America that everyone had hoped was gone.

It was here, at Standing Rock, that the most respected of all tribal chiefs, Sitting Bull, was needlessly killed by soldiers in 1890.  Less than an hour’s drive to the south is the site of Wounded Knee, the last horrible massacre of the Indian Wars in which women clutching babies were pursued for miles by soldiers who butchered them wholesale (and were then awarded Medals of Honour). Of all the remaining reservations in the United States, it is this one that is of most grave significance to Native Americans, and thus one would think the US Government might have considered its position with more sensitivity. It would be rather the same if some Japanese mining consortium decided to build a rig on top of the USS Arizona Memorial.

Not all Americans are blind to what’s happening, just as all ring-ins at Standing Rock are not from the bongos-and-incense set — the latest mail tells of more than 2000 US veterans of Iraq and Afghanistan joining the Sioux in their struggle.

Tomorrow, Americans could be fighting each other, as they once did famously, and always have been, sadly.

UPDATE: The Dakota Access Pipeline will not go ahead at the Standing Rock Indian reservation. The thousands of protesters at Standing Rock cheered as news was announced that work will cease today pending studies to explore alternate routes for the pipeline. In a statement, Standing Rock Sioux Tribal Chairman Dave Archambault II said: “We wholeheartedly support the decision of the administration and commend with the utmost gratitude the courage it took on the part of President Obama, the Army Corps, the Department of Justice and the Department of the Interior to take steps to correct the course of history and to do the right thing.”