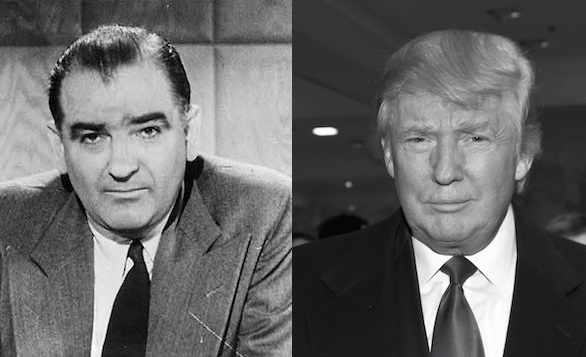 Overnight, President Elect of the USA, Donald Trump, lambasted actress Meryl Streep as an “over-rated” actress who “lost big time”. It was all in response to Streep’s Golden Globe’s speech that reminded the audience of that moment when Trump mocked a disabled reporter.

Whatever else you might think about this – whether you’re bored by actors making political statements, or think it’s silly that an incoming President might presume to be a drama critic – what should be clear by now is that Donald Trump’s skin is thinner than the hairs on his forehead. This is not the first time he has been wounded to ferocity by a jibe from the arts and entertainments.

When Alec Baldwin impersonated him on Saturday Night Live last year, Trump tweeted it was “Time to retire the boring and unfunny show. Alec Baldwin portrayal stinks.” It was the beginning of a childish slinging match with Baldwin that nobody with a brain could consider befitting of a President Elect.

In 2011, Trump appeared deeply unamused when Seth Meyers, speaking at the White House Correspondents' Dinner, made the joke: “Donald Trump often appears on Fox, which is ironic because a fox often appears on Donald Trump's head.” According to Meyers:

"I saw him a couple of nights afterward at an event in New York, and I walked over to thank him for being a good sport and he really impressed on me then that I had taken it too far. He did not accept my offer of good sport."

Contrast that with Meyer’s broadcast in the days after Trump’s election.

“I felt a lot of emotions last night and into today, some sadness, some anger, some fear,” he said. “But I’m also aware that those are a lot of emotions that Trump supporters felt, emotions that led them to make their choice. And it would be wrong for me to think that my emotions are somehow more authentic than their emotions.”

It’s hard to find anything Trump has ever said that is near as presidential.

Jon Stewart, who, like Meyers, has used Trump as the butt of many of his gags, has been ridiculed by Trump (in now-familiar language) as "highly overrated" and a "total phony", and in 2013 Trump responded to comedian Bill Maher’s joke about Trump being "the spawn of his mother having sex with an orangutan" by suing him for $5 million.

He’s demanded apologies from Broadway. He’s tweeted abuse at Miss Universe. He threatened to sue Rosie O’Donnell for saying his once went bankrupt, rapper Mac Miller for having a song called "Donald Trump", satirical newspaper The Onion, some guy who uploaded an Instagram post comparing Trump's appearance to that of a murderer, a website selling anti-Trump shirts, a 92-year-old widow for criticizing his golf course … the list of threatened law suits can be counted by the minute. No person of any sort who takes the stage, and mentions Trump’s name, is safe.

All of this would be weirdly amusing if it wasn’t such a worry.  Trump has already made clear his desire to “open up our libel laws so when they write purposely negative and horrible and false articles, we can sue them and win lots of money”. Presumably, this lust for law suits would apply not just to the New York Times, but to the likes of Stewart, Meyers, Alec Baldwin, Meryl Streep, 92-year-old widows and any other tap-dancing fool who dares to take a swipe at Trump.

The President can sue, and Trump does – as of June last year, Trump had been involved in 3500 law suits, as the plaintiff in well over half of them, the most common result being a win for Trump or a settlement.

“Trump often touts his skills as a negotiator,” wrote Nick Penzenstadler and Susan Page of USA TODAY. “The analysis shows that lawsuits are one of his primary negotiating tools … No detail is too small for a Trump suit, and he often brings to bear overwhelming legal resources that enable him to outlast his adversaries.”

It’s unthinkable in a democracy that swings so hard on its First Amendment, and most Americans probably trust that the Constitution will check any attempt by Trump to abuse the apparatus of Government. But Trump won’t bother with such apparatus – he will stride into office as America’s first Transformer™ President, a man able to switch from Commander in Chief to Civilian Billionaire faster than Superman could ever become Clark Kent. No president has ever trashed the honour of office by shape-shifting into a civilian when he needs to win a fight, but Trump will have no scruples about doing just that.

When that happens, a new kind McCarthyism may descend upon America, with comedians, actors, writers, filmmakers – anyone with an opinion and a platform – referring to Trump at their own peril.

And God bless America should Vlad Putin ever call Donald Trump a pansy.