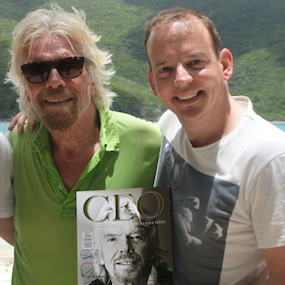 Chris Dutton has been a true entrepreneur and visionary in the media industry since emigrating from the UK in 2005.

He came to Australia with a wealth of media experience in both online and traditional print media, and he has held senior management positions at a number of global media corporations since he began his career back in 1992.

Whilst The CEO Magazine was founded in Australia, Chris expanded the iconic publication into Europe, India and South East Asia, and it is now widely recognised as one of the most influential business magazines in the world.

In 2015, Chris was invited as part of an elite group of global entrepreneurs to brainstorm ideas with Richard Branson at his home on Necker Island, only to return in 2016 to spend more time with Branson himself. Chris has worked with some of the most respected CEOs in the world and Silicon Valley based start-up king, Adeo Ressi.

Chris is regularly on national radio and Sky Business news – he is the epitome of a successful entrepreneur and lives on Sydney’s north shore.