Amazon vs Zara: The retail race is on

Will Spanish fast fashion or American big data win the battle for control of the new US$1.5 trillion high street fashion market? 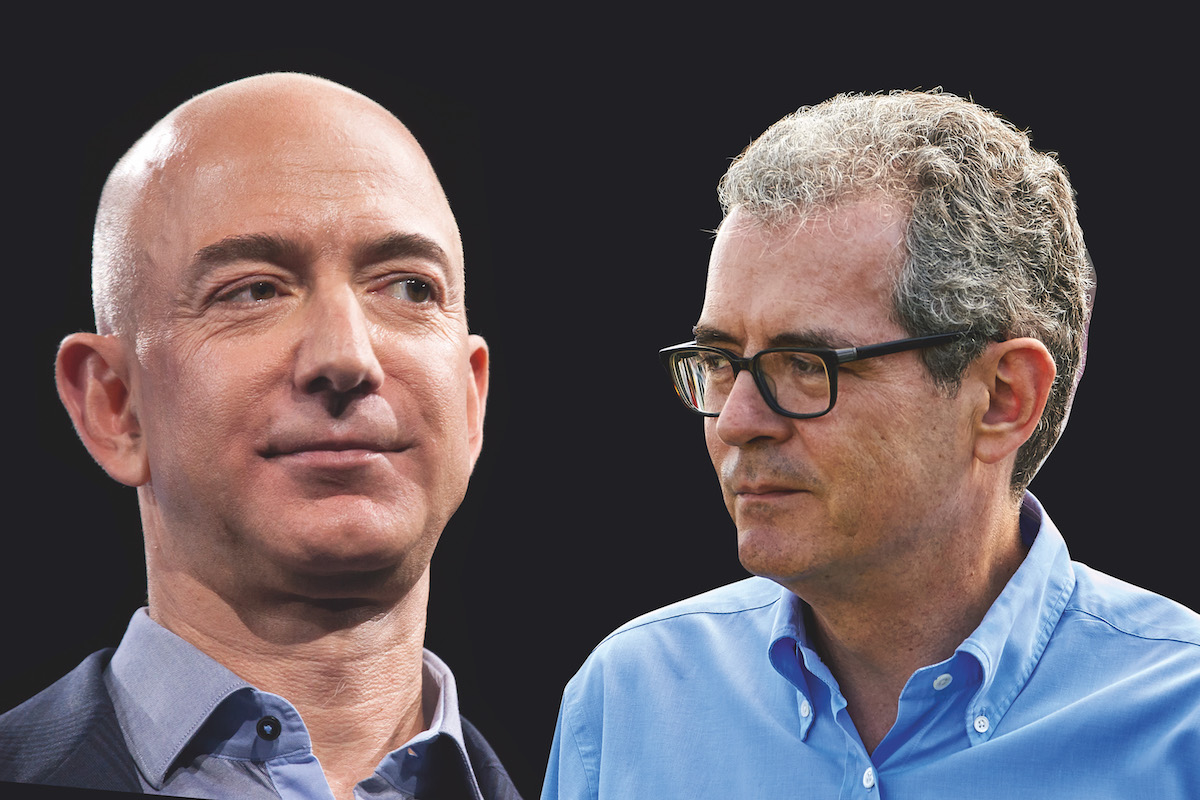 In the blissed-out Seattle winter sunshine, the glass and steel conservatories – known as The Spheres – that mark the entrance to Amazon’s head office seem to sweep you up off the pavement with the promise of a glimpse into the future – and a good time.

It is 9am and battalions of Amazonians, laptops and lattes in hand, head into Day 1 Building – it’s always Day 1 at Amazon, to remind workers that rest is for wimps.

Once inside, they slice and dice the quadrillions of bytes of consumer data that surge through the retail giant’s servers and crash on to our mobile phones, computers and smart speakers, and encourage us to shop, shop and then shop some more. ‘People who bought this also bought…’ It’s optimistic, infectious stuff.

Walk the few blocks to Pine Street, Seattle’s main drag, and the mood is very different. The Westlake Center is so quiet that entering a shop feels like intruding on the retailer’s private grief. In Nordstrom Rack it’s 60% off the designer gear that Nordstrom’s flagship store two blocks away could not shift. The only shop doing brisk full-price trade is Spain’s Zara.

It might not look like it, but this corner of Seattle is ground zero in the biggest battle in fashion – an epic global struggle that will determine the future of the high street. Not the battle between bricks-and-mortar and clicks – Amazon and other e-tailers have already won that, as the dismal Christmas trading figures from Marks & Spencer, Debenhams and House of Fraser in the UK showed.

This is the battle for the new high street; part bricks, part clicks. And there are only two contenders for the US$1.5 trillion prize – that’s the global annual value of all clothing and footwear sales, online and bricks-and-mortar, excluding ‘high fashion’, according to Euromonitor International.

In the blue corner is Jeff Bezos, Amazon’s boss. Thanks to his whizzy algorithms, he knows who we are, where we live and what we buy. After years of concentrating on basics, such as underwear, T-shirts and sportswear, he is going upmarket, offering aspirational clothes and shoe brands, plus watches and jewellery on his newly redesigned Amazon Fashion site. (Note the capital ‘F’. Bezos is serious.) He wants to offer the lowest prices on Earth and the biggest choice, coupled with sophisticated artificial intelligence, to persuade us to buy more, pricier togs.

In the red corner is Pablo Isla, CEO of Zara’s parent company, Inditex. Zara has become the biggest clothing retailer in the world by first inventing, then perfecting, cheap ’n’ chic fast fashion and Inditex generates annual revenues of €25 billion (US$28 billion). No other high street retailers – not H&M, Uniqlo, J Crew, Gap or any department store – is big enough, nimble enough or profitable enough to take on these titans.

It’s going to be quite a fight. As one fashion executive puts it, “Jeff Bezos’s new interest in our world has turned him into Voldemort. People talk about him in hushed tones.”

Shoppers could buy goods in the store and take them away – remember that? – or scan the codes on product tags for home delivery. More shops, pop-up and permanent, are planned. Amazon has also opened its own studio in Hoxton where it shoots 500,000 images a year to display on its Fashion websites in the UK, France, Italy, Germany and Spain.

Online, Bezos has signed deals with Calvin Klein, Hugo Boss, Theory, Kate Spade, French Connection, 7 For All Mankind, Diane von Furstenberg, Levi’s, Ted Baker, L.K.Bennett and Nike. Many of these labels had previously avoided Amazon, fearing that its platform was not premium enough. 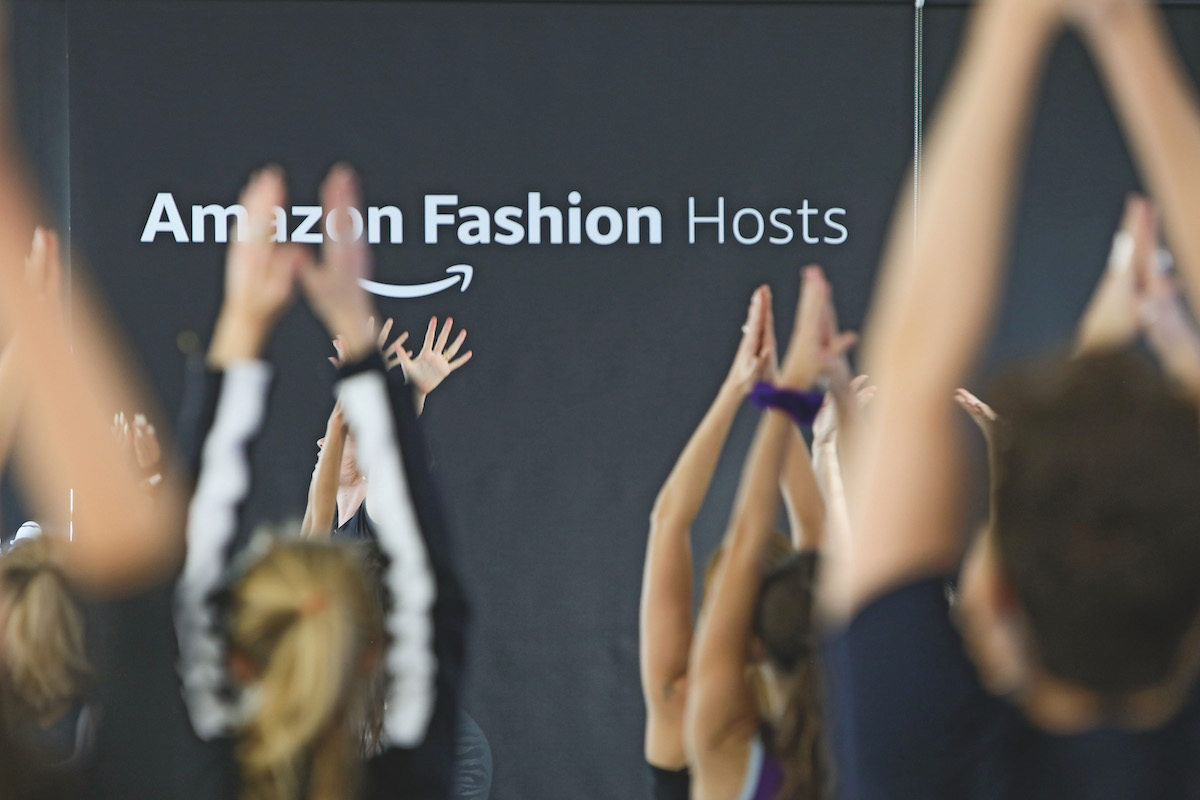 They have signed up now “because so many third-party retailers were already selling their clothes on Amazon”, says Luca Solca, a fashion and luxury goods analyst. “They figured it would be better to engage and try to control how their products are sold.”

Bezos spends more on research and development than any other CEO in the world – US$23 billion in 2017, more than four times the entire BBC budget – which enables him to pioneer new services, both digital and analog. The Echo Look is an Alexa-enabled device with a camera. We can take a photo of an outfit and send it to Amazon’s Style Check tool for “a second opinion” based on “current trends and what flatters you”, courtesy of “machine learning algorithms with advice from fashion specialists”.

He is developing an app that will enable Amazon Fashion to scour our selfies and online calendars – if we allow it to – and predict the clothes (for sale on Amazon) we may like for a particular event such as a business meeting or wedding. It will even use our selfies to create augmented reality images of what we’d look like in the clothes.

Prime Wardrobe allows us to order a box of clothes, shoes and accessories, try them on at home, send back what we don’t like within seven days and keep what we do. Only then are we invoiced.

Zara is strong where Amazon is only just getting started. It has 2,127 stores globally and is making them a lot more fun. Isla has introduced augmented reality. A recent pilot scheme showed how customers can point their Zara smartphone app at shop windows and see the models brought to life in short films.

Any of the looks in the films can be ordered directly on screen. In new hi-tech dressing rooms, information screens embedded into the mirrors offer multiple choices for combining pieces with other garments and accessories.

Zara was late getting online – it only started ecommerce in 2010 – and knows it has to raise its game. Inditex recently opened 18 online stockrooms, which means that next year Zara clothes will be available online almost anywhere in the world, making it the clothier with the largest reach.

“We want to make our collections available to all,” Isla says. Ecommerce now makes up 10% of sales, up 40% year on year, and that figure should double in the next three to four years.

How will the battle of the brands play out? In the US, Amazon has the edge. It does not publish sales by sector, but analysts say it is number one in clothing and footwear, with 35% of the market. Europe is a different story. In the UK, Amazon has only 8% of the market.

In Britain, Amazon ranks a distant seventh in online clothes and shoes sales, with a 4.8% market share, behind Next, John Lewis and Asos. The problem for Bezos in Europe is that Amazon is not seen as fashionable – a lesson he learned painfully when he tried to persuade the likes of Gucci and Prada to sign up.

They showed him the door. “Being popular is not the same as being chic,” one executive told him. To make matters worse, the mid-market consumers, whom Bezos has now been forced to target, are already well served by the websites of all the major European brands, as well as Asos, Boohoo, Missguided and Zalando. 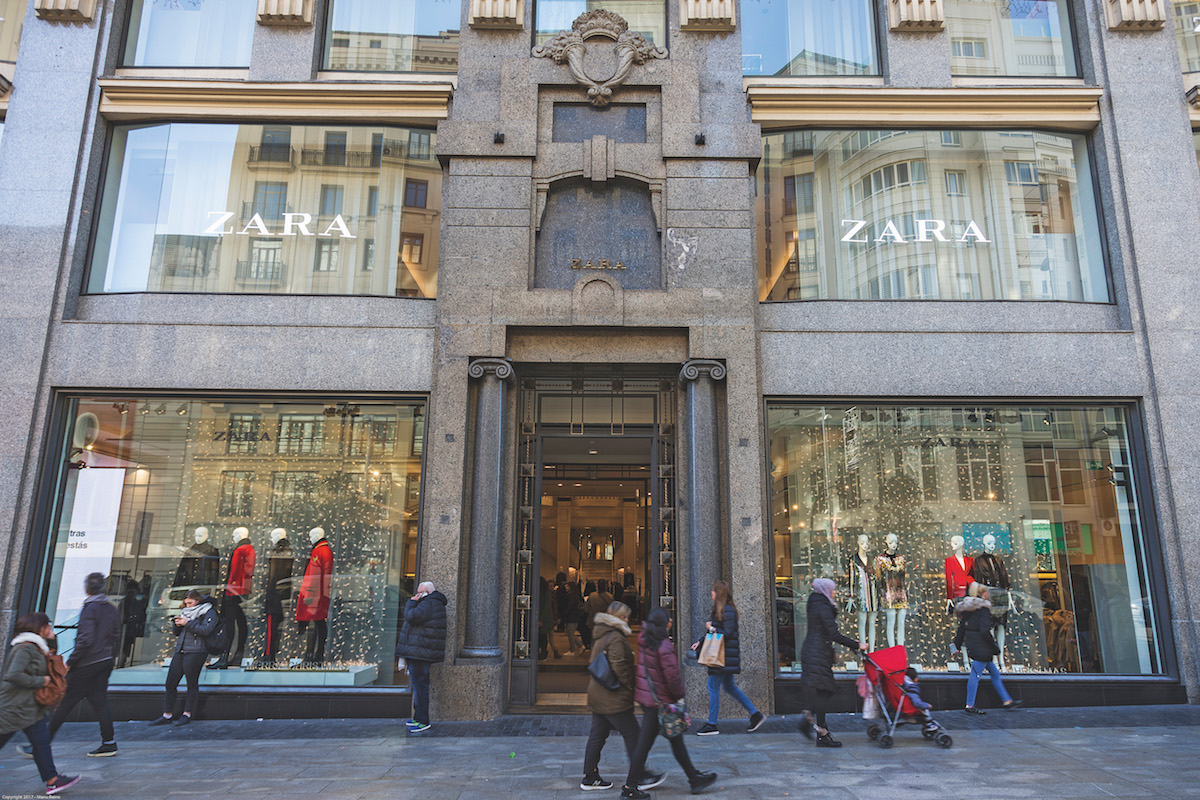 Zara has the advantage of making most of its clothes in factories in or close to its headquarters in northern Spain, while Amazon subcontracts the manufacture of its own label collections. That means Zara can react faster to style trends, which, thanks to its vast store network, may be more current than Amazon’s.

“Fashion is about mood and emotion, things that algorithms find it hard to measure,” says John Hooks, a British-born executive and consultant to the world’s biggest fashion brands.

Solca acknowledges Zara’s strengths but argues Amazon’s greater size and scale may, over time, give it the edge. “Amazon could develop a Zara model on steroids, combining gigantic databases, AI and sourcing skills to become invincible.” Zara, he adds, faces structural challenges that Amazon can ignore. Isla has to keep his customers interested in cheap chic when responsible consumerism is on the rise in many markets. Gen Z (born around 2000) find the idea of fast fashion or even buying anything new ridiculous.

Many millennials (born around 1990) buy based on resale value and use sites like Vestiaire Collective and Grailed that trade in pre-owned clothes. Many consumers over 40 are busily Marie Kondo-ing their wardrobes. All Bezos’s customers care about is low prices, choice and fast delivery.

Elaine Kwon, a former vendor manager at Amazon Fashion who now runs Chanlogic, an ecommerce business intelligence consultancy for fashion brands, says the duelling behemoths are well matched. “Zara was laughed at by the industry when it tried to become more fashion forward while remaining affordable.”

Amazon is “testing how far it can push its utilitarian business model into the style sector. I call it the puberty phase,” she laughs.

Who will grow up faster, bigger and better dressed? That’s the US$1.5 trillion question.

Mukesh Ambani, the richest business magnate in Asia, is going head-to-head with Amazon’s Jeff Bezos, the world’s wealthiest tech honcho, to compete for market share of ecommerce in India.

Announcing plans to take on foreign ecommerce in India earlier this year, the Chairman and Managing Director of Reliance Industries Limited, Mukesh Ambani – who has a net worth of US$52 billion – is set to launch his own online retail platform within a year, directly competing with US-owned duopoly Amazon and Flipkart.

Amazon India, which has been in the country for more than five years, now with a net worth of US$16 billion, dominates the country’s ecommerce sector along with Walmart-owned Flipkart, each with an almost equal 30% market share, according to a Citi Research report published in 2018.

The retail arm serves about 3.5 million customers every week through almost 10,000 stores, while Jio gained a 20% market share in its first two years and has approximately 280 million users. 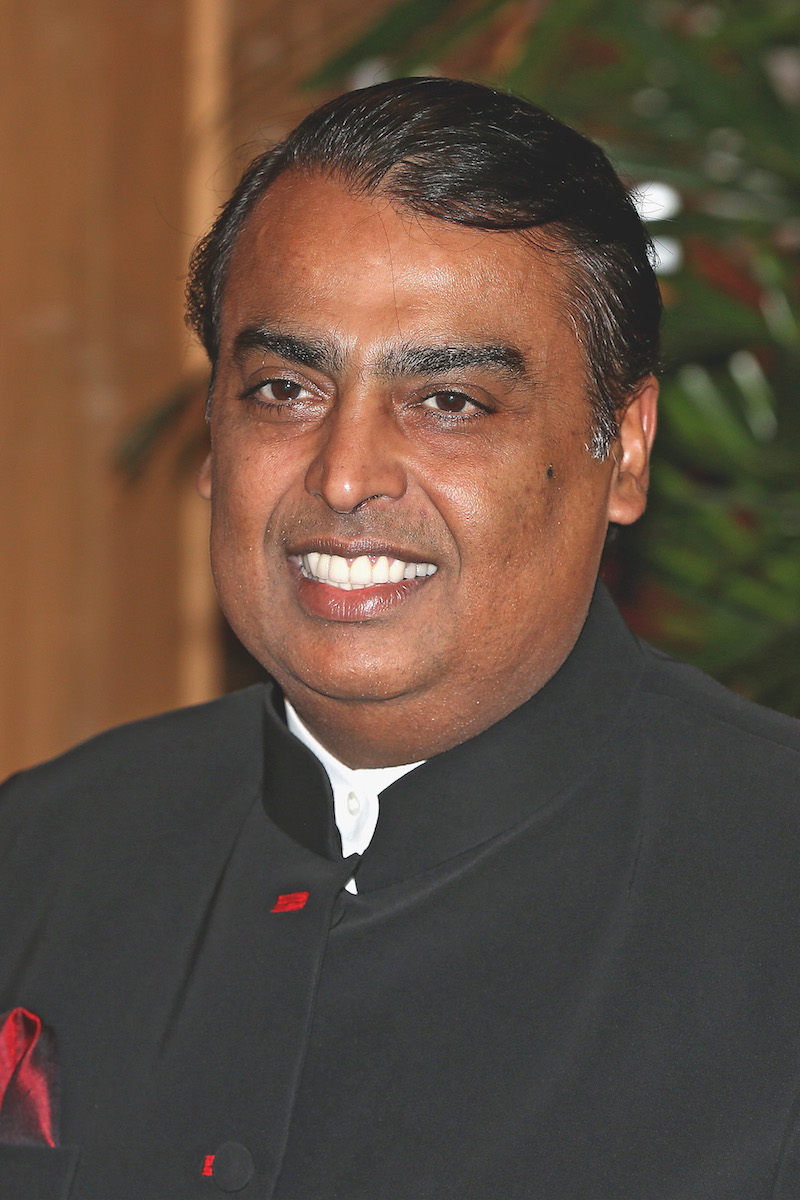 The ecommerce platform will initially target 1.2 million local retailers in India’s western state of Gujarat, empowering local merchants in the area to sell their products online.

At the Vibrant Gujarat summit in January 2019, which was attended by Indian Prime Minister Narendra Modi, Ambani said that the country has to “collectively launch a new movement against data colonisation”.

“For India to succeed in this data-driven revolution, we will have to migrate the control and ownership of Indian data back to India – in other words, Indian wealth back to every Indian,”

he announced. Addressing Modi directly, he said: “Honourable Prime Minister, I am sure you will make this
one of the principal goals of your Digital India mission.”

Ambani’s company will have some protections against foreign retailers in India, echoing the country’s tightened rules for foreign-owned online retailers. The laws prohibit foreign ecommerce companies from selling products of companies in which they have an equity interest.

They also prevent them from pushing retailers to sell exclusively through their platforms, giving an edge to local enterprises such as Reliance, while putting a strain on foreign operations.