Business is not a choice between profit and purpose anymore says Salesforce's Marc Benioff, who has proven success can be measured in both. 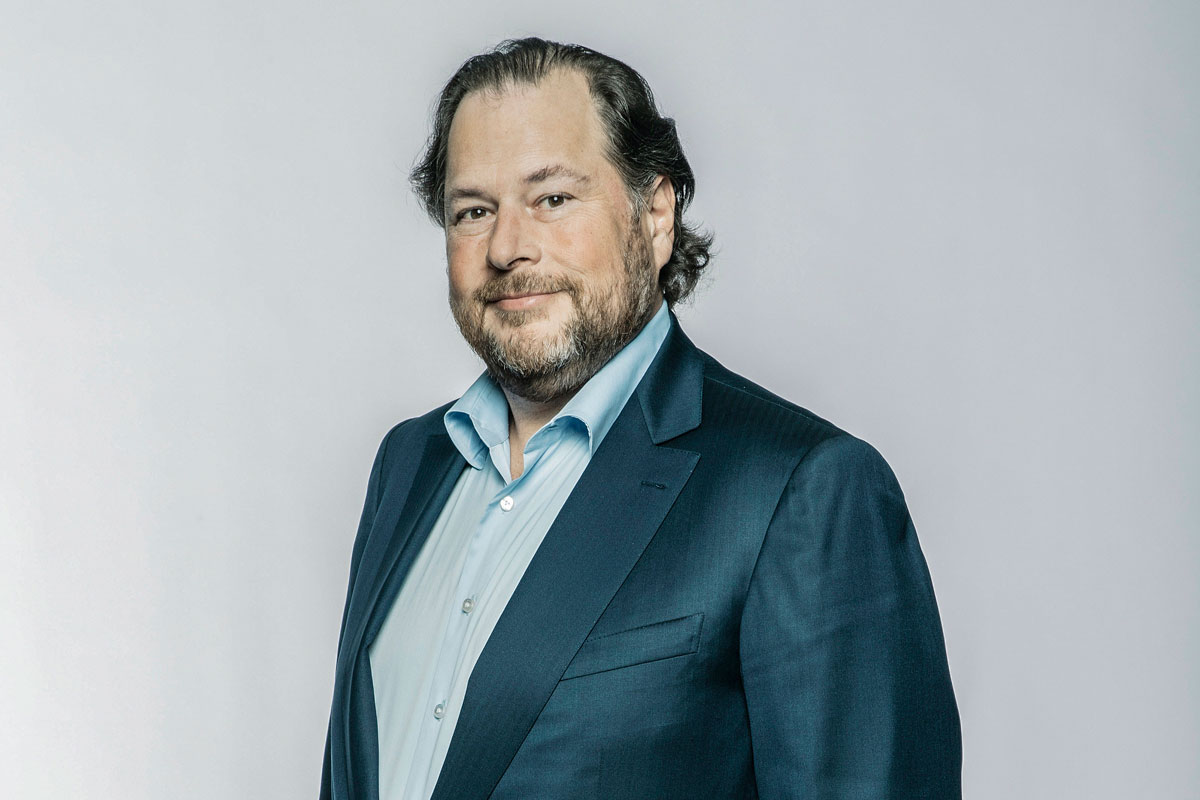 Just over 50 years ago, famed economist Milton Friedman stated: “There is one and only one social responsibility of business – to use its resources and engage in activities designed to increase its profits.”

One of the foremost voices in business to challenge this idea as outdated – and actually bad for business – is Marc Benioff, Co-Founder, Co-CEO and Chair of Salesforce, who is proving that profits are not just monetary and consumers and staff want social responsibility pushed as a priority.

“The great miscalculation of the age is the idea that businesses have to make a choice; to become profitable, or to become platforms for change. This is not the case,” he says in his groundbreaking book Trailblazer: The Power of Business as the Greatest Platform for Change. And he has proved change and growth can actually be symbiotic.

Social responsibility was part of the foundation of Salesforce from its conception in 1999. Before the company had made a dollar it was ready to give back – a revolutionary idea back then. Benioff knew it was important. “We decided that no matter how big the company grew, we should always set aside one per cent of our equity, product, and employee time for charitable causes,” he writes. 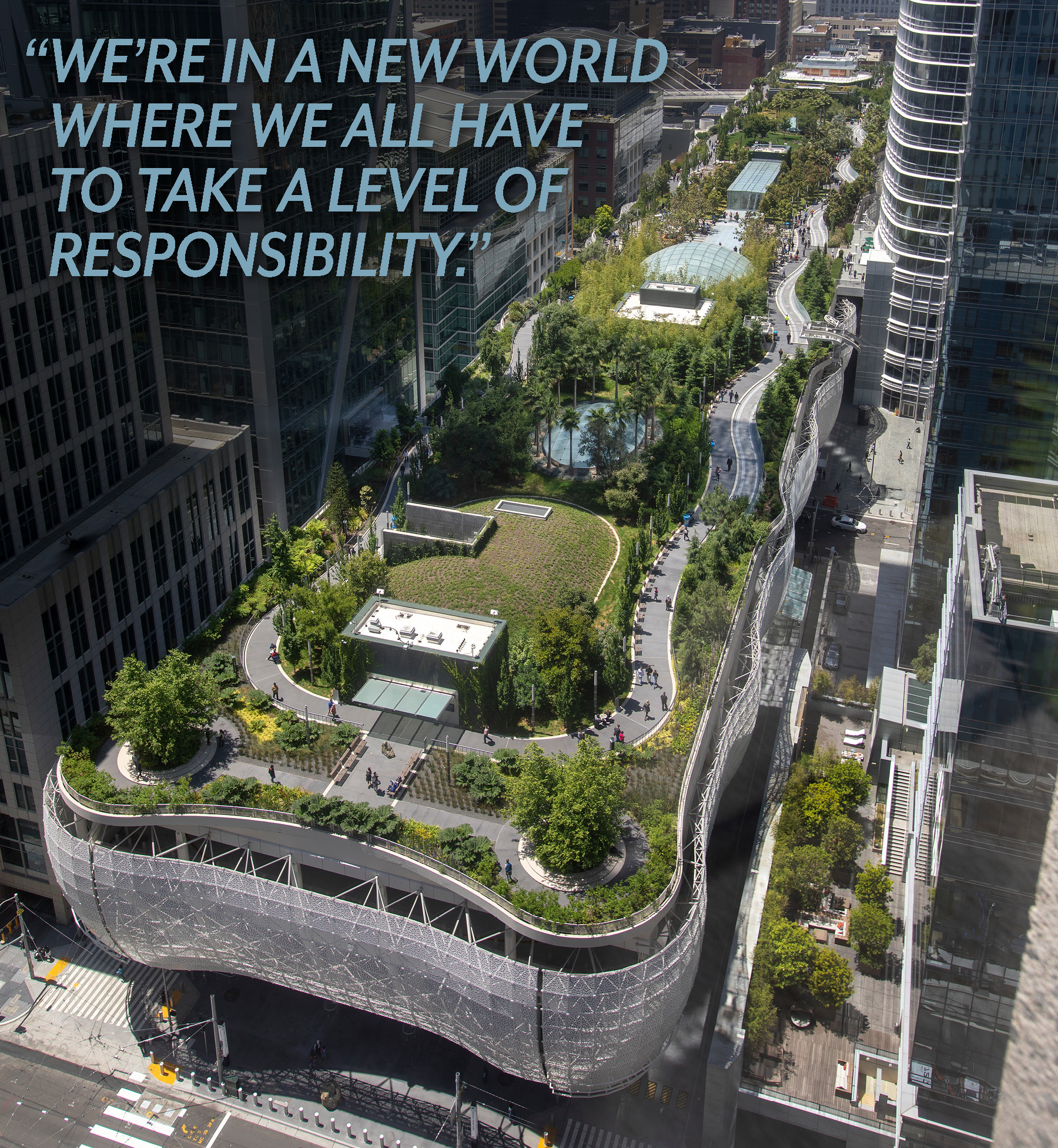 His desire to build a company that gave back comes from an experience which sounds like a tale from a storybook. Despite becoming a millionaire at 25 and the youngest ever Vice President of software giant Oracle, he was feeling unmotivated and unhappy. His company suggested a sabbatical and Benioff decided to travel. While with a friend in an Indian village, he had an epiphany after meeting a Hindu spiritual guru called Mata Amritanandamayi.

“She looked right at me and said, ‘In your quest to change the world, don’t forget to do something for somebody else,’” Benioff remembers. “It was she who introduced me to the idea, and possibility, of giving back to the world by pursuing my career ambitions. I realised that I didn’t have to make a choice between doing business and doing good. I could do both.” To this day, Amritanandamayi remains a friend and Benioff has stayed true to his belief.

Twenty-two years on, the significance and impact of that one per cent promise can be seen – as the company has given more than A$329.8 million in grants, 3.5 million hours of community service, and provided product donations for more than 39,000 not-for-profits and educational institutions.

Meanwhile, Salesforce celebrated a total fiscal revenue of A$36.4 billion for the financial year ending January 2022, proving profits are certainly not the casualty of philanthropy. As the number one provider of customer relationship management software globally and Fortune 150 company with 75,000 employees, the ethos of giving has, in Benioff’s view, helped the company grow and retain talent.

“In a competitive business such as tech, where luring top talent can be the difference between profit and loss, it’s often something intangible – like a diverse, inclusive, values-driven culture – that determines where the best and brightest decide to work,” Benioff explains. 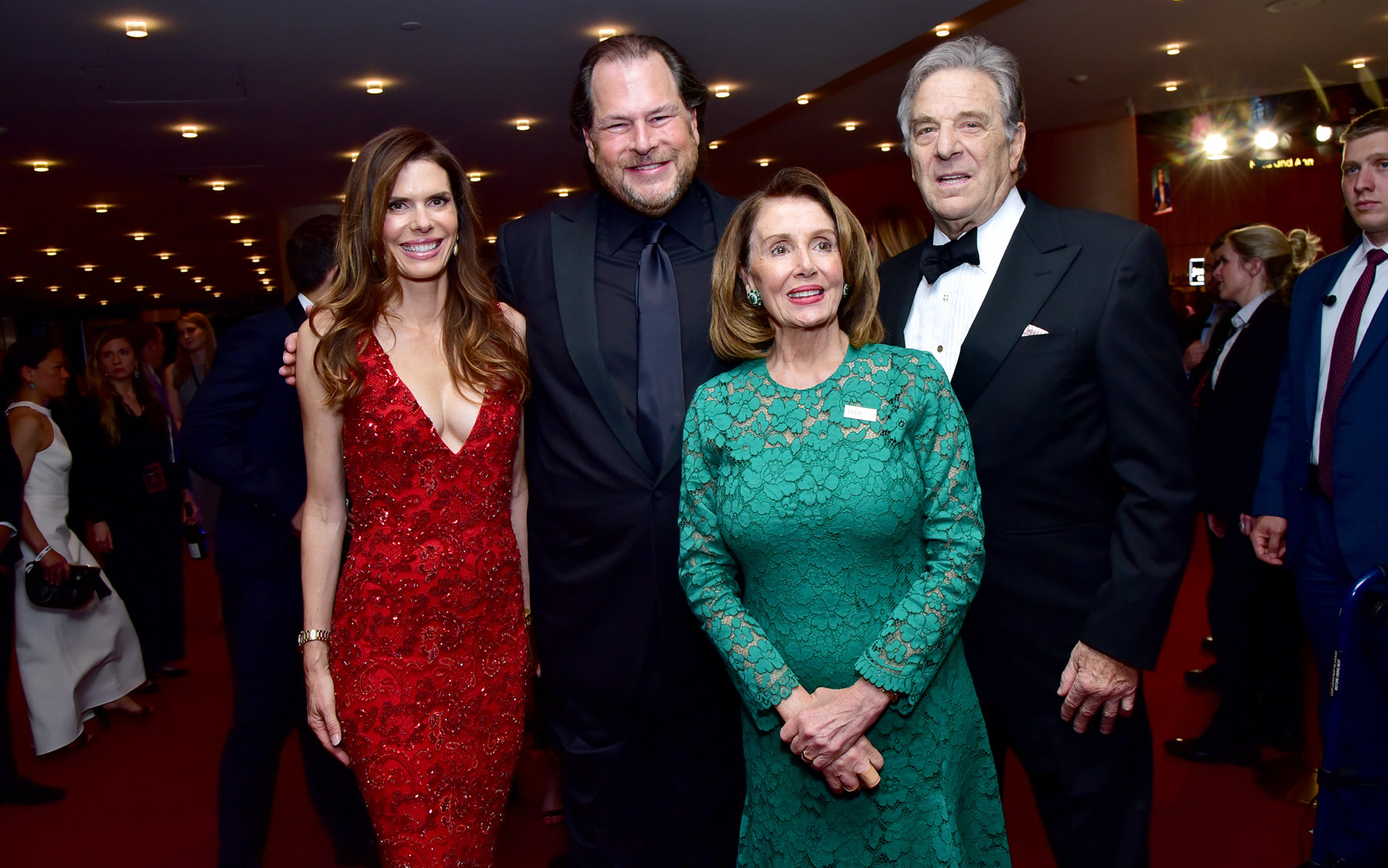 And after personally struggling with ‘purpose’ while he was at Oracle, he believes this is what actually pushes up profits. “Our own data shows that giving back is the second-highest reason why new hires join Salesforce, and it ranks in the top three reasons why employees stay,” he shares.

His simple but effective concept has gained traction, leading more than 10,000 companies in 100 countries to join his 1-1-1 model of philanthropy. “I think business is the greatest platform for change,” he says. “When you have businesses with all of these relationships – customer relationships, employee relationships, vendors, partnerships – you can do amazing things.”

It’s not just his employees Benioff is asking to give back. With an estimated worth of A$11.5 billion, he also owns around four per cent of shares in Salesforce, and is keen to share that wealth to create good.

Along with his wife Lynne, the Benioffs have given more than A$343.6 million to the University of California to build UCSF Benioff Children’s Hospitals in San Francisco and Oakland. They have also established the Benioff Ocean Initiative to help overcome environmental challenges in the seas of the world; the UCSF Benioff Homelessness and Housing Initiative to provide accurate, timely policy-oriented research about homelessness for policymakers and practitioners; and funded research and centres in the field of prostate cancer and microbiome medicine.

However, in keeping with the one per cent philosophy, cash donations are not where responsibility ends. A member of the World Economic Forum (WEF) board of trustees, Benioff co-founded 1t.org – the global movement to conserve, restore and grow one trillion trees – and the WEF Friends of Ocean Action.

An on-the-ground approach is especially important when it comes to his hometown. Unlike many of the estimated 50 billionaires in the San Francisco area, Benioff grew up in the city where his dad owned a department store, so helping the city he loves grow and playing a part in fixing its social issues are incredibly important to him.

He serves as the inaugural chair of WEF’s Centre for the Fourth Industrial Revolution in San Francisco and, through Salesforce, set up the Child Welfare and Thriving Communities action plan which operates in the San Francisco Bay Area, a region currently experiencing never-before-seen levels of homelessness and child poverty.

Benioff is looking at ways to provide housing as well as end the cycles of poverty which leave children vulnerable. “Companies, and the people who lead them, can no longer afford to separate business objectives from the social issues surrounding them,” he insists. “They can no longer view their mission as a set of binary choices: growing versus giving back, making a profit versus promoting the public good, or innovating versus making the world a better place.” 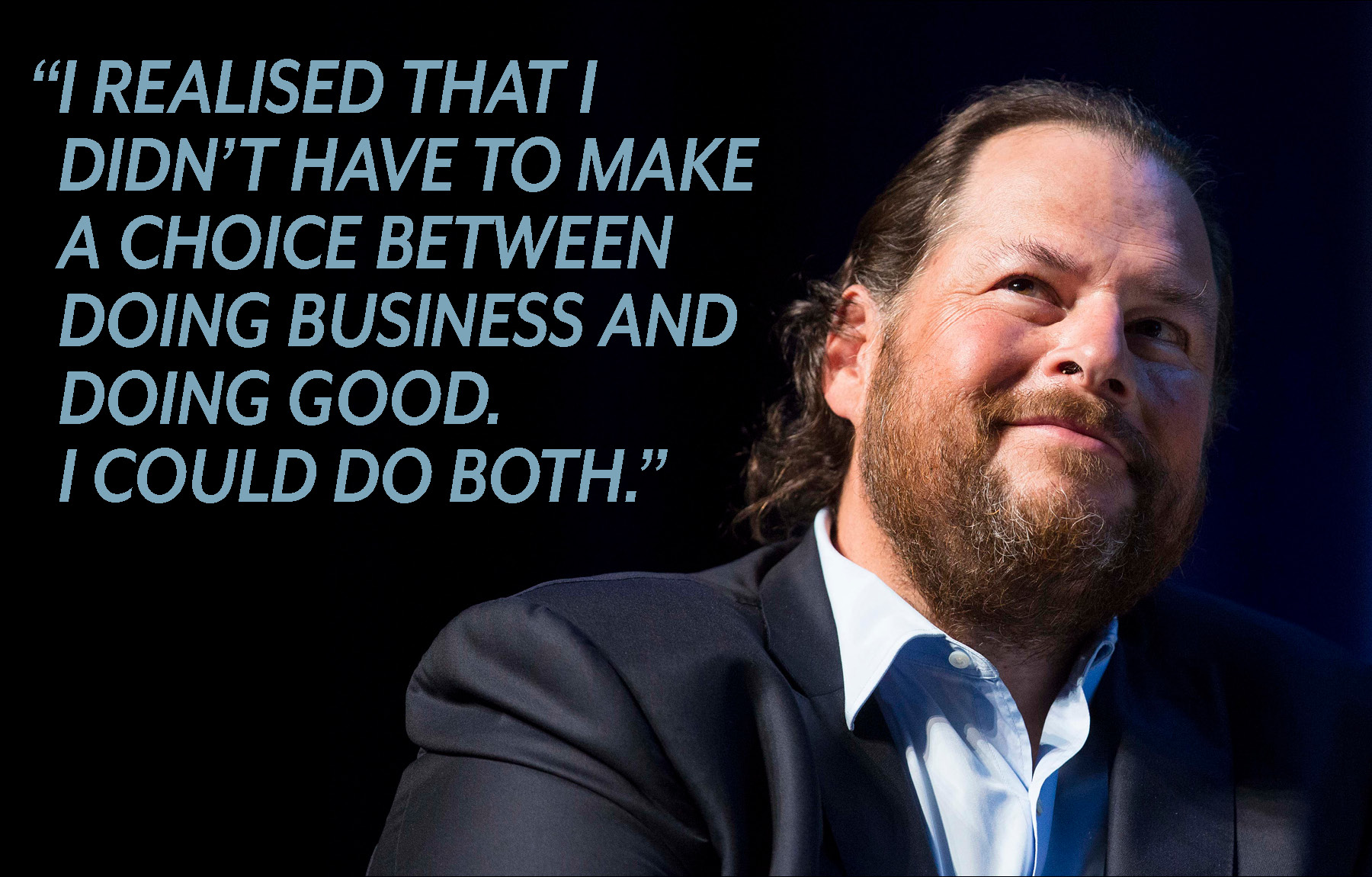 He credits the volunteering percentage of his ethos with shining a light on what was happening in his hometown. “Our employees are mentoring in these schools and all of a sudden, we realised one out of every 30 kids in the San Francisco public schools is homeless,” he says.

Stepping in to bring about change was a no-brainer for Benioff – and as one of the most well-connected individuals in the world, he is quick to get on the phone to other CEOs and point out they too need to step up and take responsibility for becoming part of the solution.

“I went to public schools, I’m part of this community so I feel an obligation and I think I’m trying to instil that in others and remind other CEOs. You’re either for the homeless and for the kids and for the hospitals, or you’re for yourself. So you can decide, who are you for? And it’s really that simple.”

Equal rights are a CEO’s responsibility

Within the business community, Benioff is also keen to show companies run better when employee rights are respected – even if that has a cost to the company. In 2015 he supported his then personnel chief Cindy Robbins when she highlighted the gender pay gap between male and female employees. He admits that at first, he didn’t believe it was an issue as the company was keen to push equal rights but internal research proved women in the business were consistently worse off. Despite it costing the company A$4.1 million to correct that year, Benioff didn’t hold back on righting the wrong.

He then spent another A$4.1 million the following year to address compensation differences by gender, race and ethnicity across the company, and new rules to make it more likely that women would be promoted and seen as leaders. He even stated that he would not hold a meeting unless 30 per cent of the participants were women. 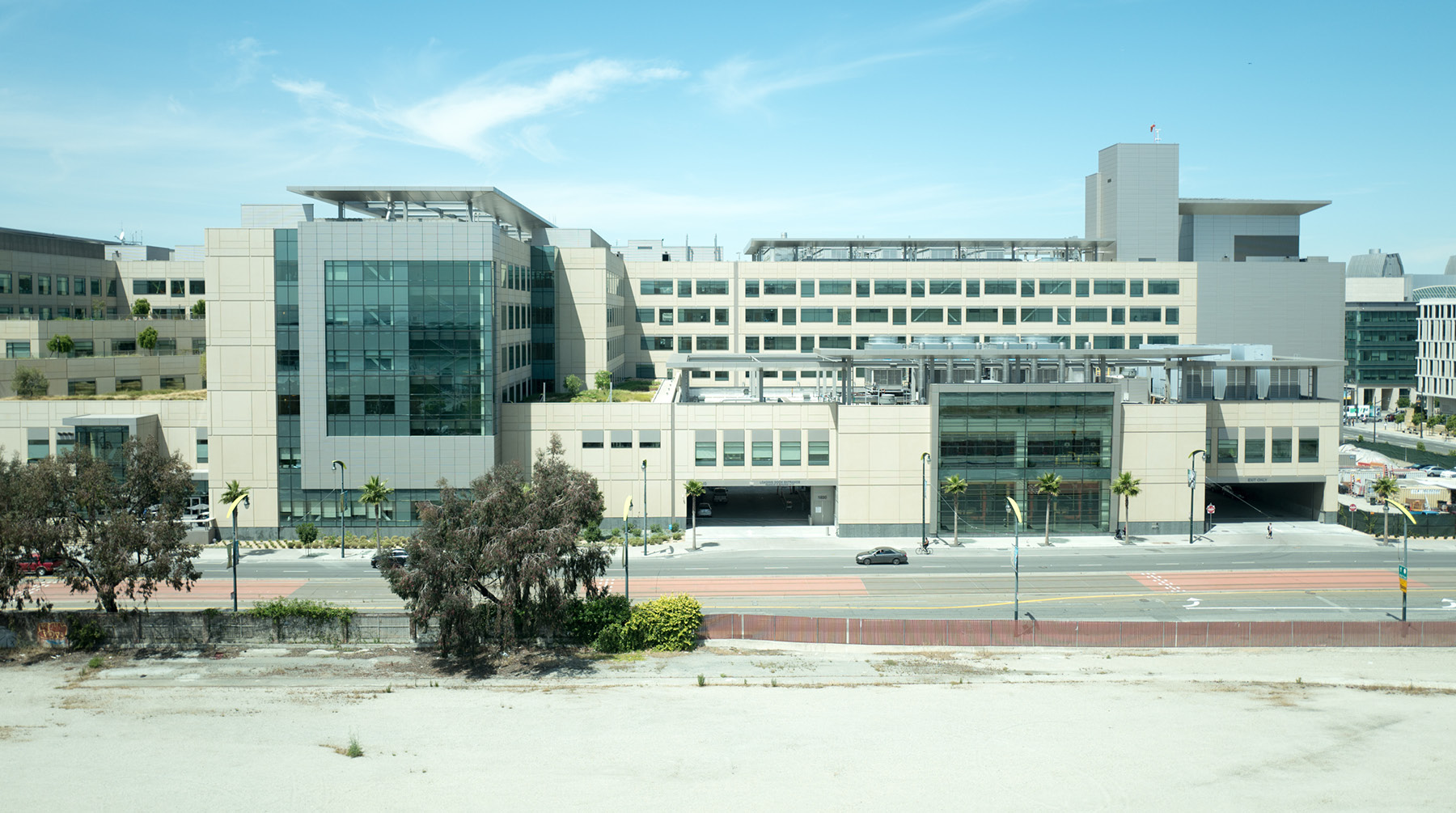 “CEOs with one button on one computer can pay every man and every woman equally,” he explained later. “We have the data. We know what everyone makes. There’s no excuse.”

He has also refused to let profit stand in the way of principle when it comes to being vocal about LGBTIQA+ rights. Benioff has crusaded against anti-LGBTIQA+ laws and legislation in Indiana, Georgia and North Carolina, and was willing to withdraw millions of dollars of business from those areas if his staff and customers were discriminated against.

“Today, CEOs need to stand up not just for their shareholders, but their employees, their customers, their partners, the community, the environment, schools, everybody,” he explained. “Anything that’s a key part of their ecosystem.”

Advocacy for LGBTIQA+ rights in the workplace and beyond is central to Salesforce, along with race, gender and public education equality. Standing up and doing what is right is certainly at the core of Benioff and by making it also the core of his company and practising what he preaches, he hopes a global shift in how we view the responsibility of business will follow.

As a changemaker, there is no doubt Benioff is a pioneer of the highest order. But to him, the idea of shaking up the system we have known for centuries is a win–win: “I really think we’re just in a new world where we all have to take a level of responsibility.”

Read next: Why corporate social responsibility is the secret to building brand loyalty