Feminist fatale: Inside the mind of Sheryl Sandberg

Three tips on how to ‘lean in’ from one of the most powerful women in business – Facebook COO Sheryl Sandberg. 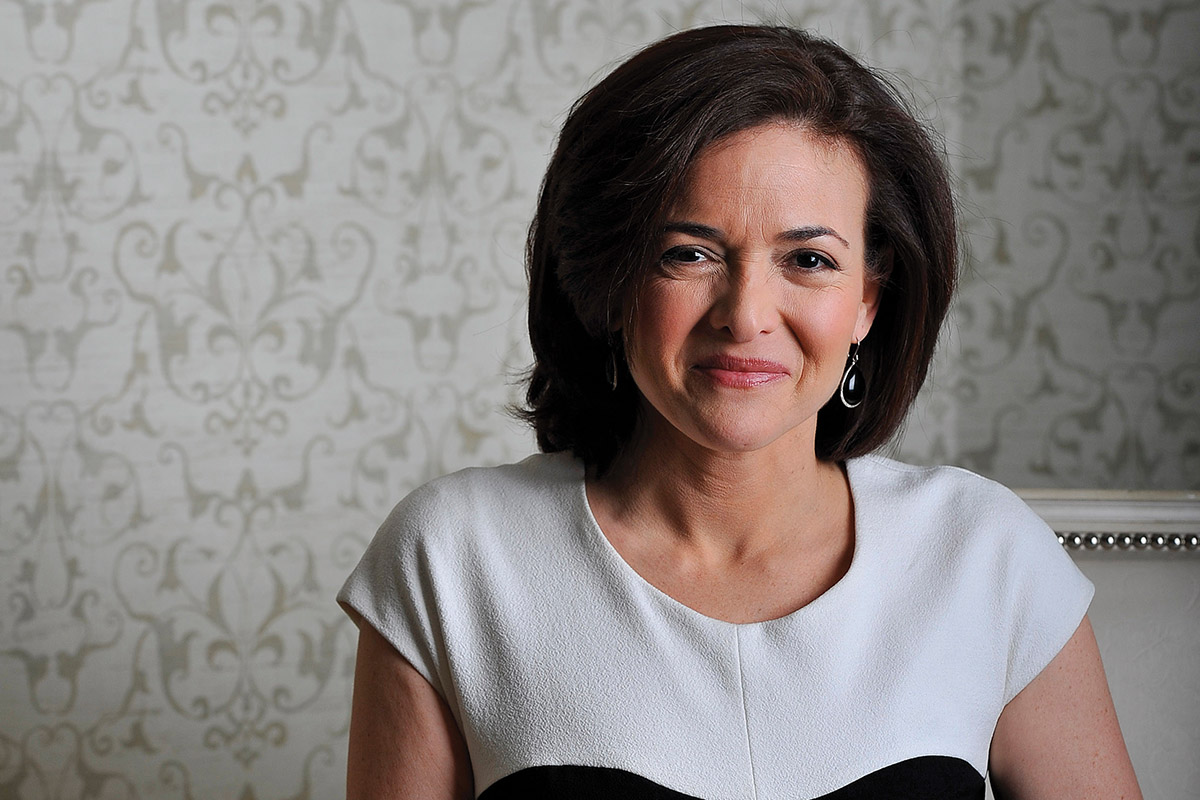 The problem with Sheryl Sandberg – Facebook COO, billionaire, bestselling author and campaigner – telling the world we need to stop being intimidated by the idea of women in charge is that she is very intimidating.

Her boss, Mark Zuckerberg, must really like being kept on his toes, because back in 2008 he elected her to monetise, and manage, one of the world’s biggest businesses. Sandberg, 48, has since been credited with turning Facebook from being a cool site that people liked sharing photographs on into a fast-moving money-making juggernaut.

If that sounds like a challenging job (it’s certainly a profitable one, with her net worth estimated at US$1.65 billion, or more than those of Beyoncé, Madonna and Taylor Swift combined), then consider that it’s still not enough to fill Sandberg’s days.

Always busy, she’s also written two bestselling books, runs a not-for-profit organisation born from her book, Lean In, sits on the board of several major organisations (including Disney, until recently), and is a single parent to two young daughters. On The Late Show with Stephen Colbert.

She also looks very much like an American sitcom mom, and can occasionally sound a little like a self-help guru when she appears on Ellen and advises people on how to deal with adversity: “We’re not born with a fixed amount of resilience; it’s a muscle, and that means we can build it.” But underneath the seemingly flowery language it’s clear there’s a fierce intelligence and a razor-sharp business brain.

Incredibly, Sandberg somehow also finds time to campaign for women – you can bet she’ll be all over the internet on International Women’s Day – and to encourage them to move up in the business world, literally by “leaning in”, and making themselves heard. It’s hard to believe that there was a time when she was silent on such issues, keeping her head down, while working as one of the few women at the C-suite level.

Only woman in the room

“I went through my whole business career without talking about the fact that I was a woman, or making a thing of it, because I just thought things would change, that equality was now ours for the taking, that was the world I graduated in. But that wasn’t the case, because year after year I found myself the only woman in the room,” she recalls.

“And you never talked about being a woman, because then someone might notice that you’re… [comic whisper] a woman. And if you mention being a woman they’d think you’re asking for special treatment, or complaining or, worse, about to sue them.” 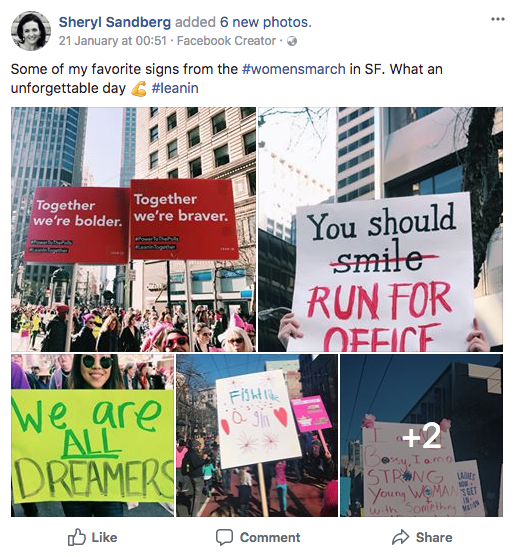 What changed everything was her decision to present a TED talk, in 2010, about women and work, which some colleagues warned would end her business career if she went ahead with it.

“I was scared, so I thought about what my boss, Mark Zuckerberg, always asks us, which is ‘What would I do if I wasn’t afraid?’ So I did it,” she recalls.

And she didn’t hold back, declaring that women were simply not making it to the top, in any profession, anywhere in the world (her world-renowned book, Lean In, which solidified her place as the world’s feminist fatale, followed in 2012).

The numbers tell the story

“The numbers tell the story quite clearly – out of 190 heads of state, only nine are women,” she said. “Of all the people in parliaments around the world, 13% are women. In the corporate sector, women at the top C-level jobs, board seats, tops out at 15% or 16%. The numbers have not moved since 2002, and are going in the wrong direction.”

Further, women systematically underestimated their own abilities, and were terrible at negotiating, she claimed. Sandberg quoted a US study showing that 57% of college-educated men negotiated their first salary, compared with just 7% of female graduates who were confident enough to ask for more. “Ask a man why they did a good job and they’ll say ‘Because I’m awesome’, but if you ask women they’ll say ‘I got lucky’, ‘I worked hard’ or that someone helped them.

She quotes a famous Harvard Business School study, where a professor took the true life story of a successful venture capitalist called Heidi Roizen and handed it out to his students. But in some cases he changed just one word in the text, switching the first name from Heidi to Howard.

Both groups of students rated the two as equally competent; however, everyone said they liked the sound of Howard, and would love to work for him, but described Heidi as up herself and political, and wouldn’t want to be employed by her.

Inherent biases are something Sandberg still rails at today, and is working against through her policies at Facebook, where women now represent 55% of all non-tech employees. Sadly, she says, on the technology side, women make up a mere 19%. 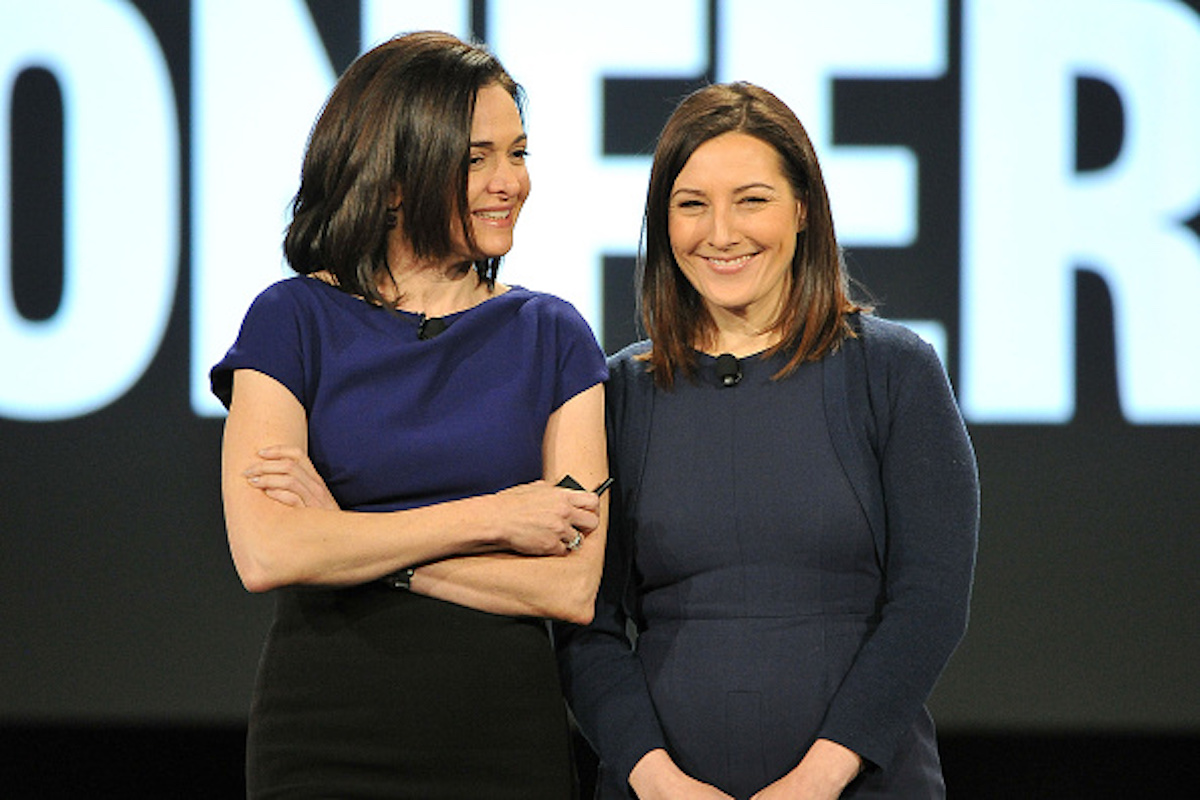 “We have to increase the number of women going into computer science; women are 18% of computer science students in this country, so we’re at 19% in tech at Facebook. Both of those numbers are way too low,” Sandberg says.

“My worst story is, years ago, when talking to a young computer science intern, I said, ‘Where are all the girls?’ He looked at me and said, ‘There are more Daves than girls in my department. He meant there were more men named Dave than girls in his whole school.”

While she admits it seems impossible to her that we’ll achieve genuine equality in her lifetime, she’s not giving up hope – or the fight – yet.
“We have to understand that we all have a bias against women in leadership, and then we need to correct for that. Recognising the problem is a solution,” she insists.

“My generation really, sadly, is not going to change the numbers at the top, they’re just not moving. There will not be 50% of the people being women at the top of any industry. But I’m hopeful that future generations can achieve that.

For now, her mission is to lay the groundwork for those future generations, by empowering and educating the workers of today.

What you can do

Sandberg was recently asked what advice she would give to anyone joining today’s workforce, and as usual she was ready with an answer.

“The first thing I would tell men and women is that biases are real, but you can correct them – on every level, and once you see them, you see them everywhere, but you have the power to take those steps,” she said.

“The second thing I would tell everyone, especially men, is that it is in your interest to do so. Whether you are the CEO or an entry-level worker, being able to work with [the other half of] the population, you’re going to outperform your peers.

“And the third thing is to lean in. Don’t let anyone tell you you can’t. You can. You’re going to be told you can’t over and over. They’re wrong. You can, and you should.”

Yes, it does sound a bit like gung-ho positivity, but it’s hard to argue with someone as successful, and fierce, as Sheryl Sandberg.