The future of Virtual Reality in HR

As digital technology continues to transform workplaces across the globe, an increasing number of companies are using social media, digital offerings, and even VR to attract the best and brightest candidates. 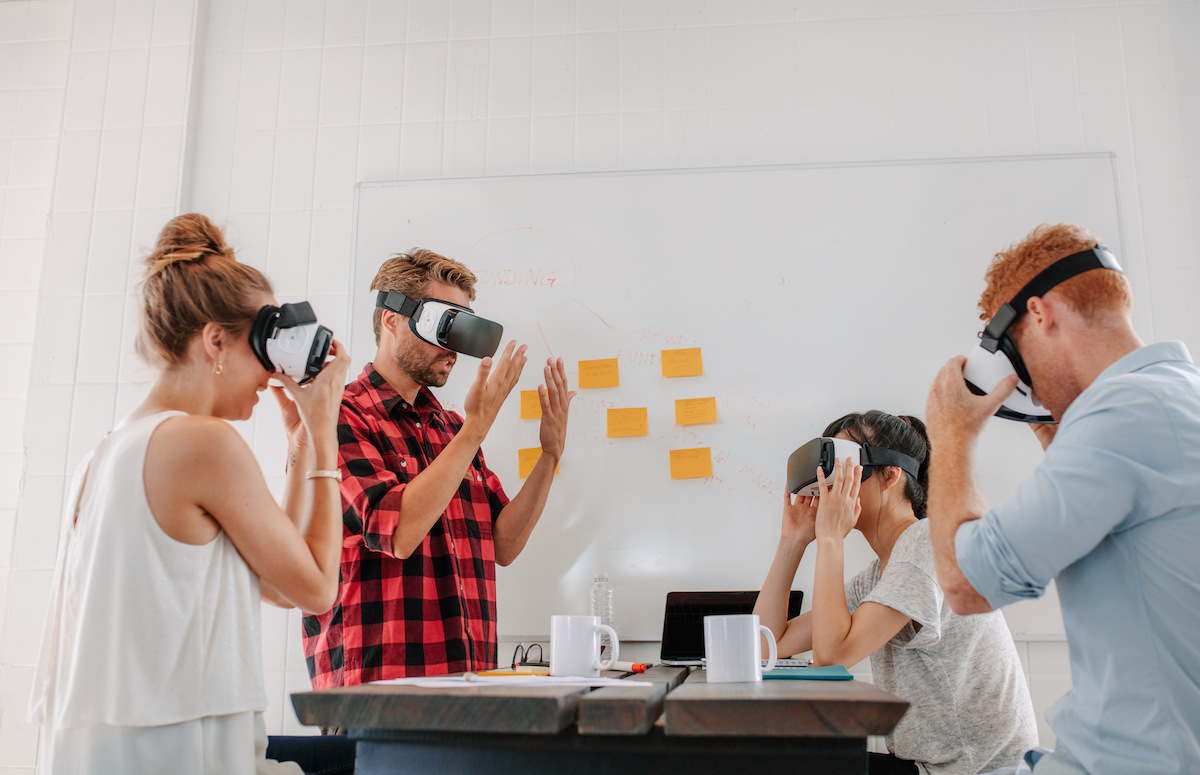 Technology is allowing businesses to recruit candidates without the usual expense and hassle as newspaper job listings, physical CVs, and face-to-face interviews become a relic of the analogue past. Indeed, the application of digital technologies such as virtual reality, social media and high-definition video in recruitment is resulting in big changes taking place across the human resources industry.

While cutting-edge technologies represent potentially large cost savings for HR departments, they also present new challenges for recruiters, many of whom are unfamiliar with the latest industry tech. At Employment Hero, an HR, payroll and employee benefits platform provider, Chief Executive Ben Thompson says the sector has done away with the filing cabinets and manila folders of the past.

Thompson, who founded the Sydney-based company in 2014, says one of the biggest disruptions in 2017 is the integration of virtual reality technologies into the hiring process.

While incorporating VR into recruitment may seem like science fiction, Thompson says it’s a reality being embraced by firms in Australia and overseas. At present, the most popular use of VR in hiring is to attract talent, with brands like CommBank, General Mills, and Deutsche Bahn already exploring the tech in recruitment drives.

“The most common VR recruitment experiences today are simply attempts to showcase a workplace in a new and exciting format that engages candidates with an employer’s brand. Examples of this include 360-degree video walkthroughs of the workplace,” Thompson explains. “These experiences help a business stand out from the crowd in a competitive recruitment environment.”

However, the recruitment expert goes on to say that this hardly touches on what VR can offer. That’s because, in his opinion, the much-vaunted technology can create immersive experiences that he describes as “tactical, strategic and narrative-based.”

The benefit of such engaging experiences, he says, is that they give companies the power to better predict employee behaviour by recreating specific workplaces and jobs. “For example, we can actually see how a soldier will behave in combat or how a share trader will react in a high-stress situation involving multiple ethical decisions. We can see a doctor’s tactical, strategic and emotional skills in situations that are too risky to create in reality.”

While candidate immersion represents VR’s most exciting HR application, Thompson says, other uses include achieving a “more realistic telepresence” in remote interviews and the introduction of VR games to test candidates’ job skills.

When it comes to deciding when to deploy VR in a recruitment setting, he urges employers to target high-stress and specialised roles. “Flight simulators have existed for decades because pilots are responsible for hundreds of lives and very expensive aircraft. VR gives us the ability to create affordable job simulators for almost any type of profession,” he says.

Thompson predicts a bright future for VR in recruitment as the costs of VR headsets and consoles, like the popular Oculus Rift, HTC Vive and Sony PlayStation VR, continue to fall.

Access to virtual reality will be bolstered, he says, by new 360-degree cameras available for around $500, such as Samsung’s Gear 360 camera and the LG360 Cam, that will open up VR to firms reluctant, or unable, to splash out on higher-end devices.

“As the cost of production decreases, there is no reason that VR will not be useful for recruiting any type of role,” Thompson adds. “For instance, if somebody needs to display empathy with customers in a retail environment, then it would be easy to put them in a virtual retail environment and test their reaction to a wide range of virtual customers.”

Its recruitment team got creative when tasked with engaging a casual pool of 1,500 workers, and 300 full-time staff, ahead of the centre’s opening in late 2016. ICC Sydney Chief Executive Geoff Donaghy says his in-house HR staff set up an online hiring process that comprised a simple smartphone-based application and a brief digital video interview that candidates could complete at any time.

The results, Donaghy says, have been pleasing, with the “fast and simple” online strategy showing a 75% success rate on hired candidates. “The ability to screen candidates faster and more effectively means fewer man hours attributed at the recruitment stage and more time spent on maintaining a strong culture and retaining great talent,” he tells The CEO Magazine.

“Investing time at the outset on specific job-related questions and inviting candidates to respond to them over video whenever and wherever they want, even from their living rooms, enables our recruiters to better assess their skills, experience, and overall cultural fit.”

He estimates the move to a totally digital hiring process saved the company about 7,000 work hours for ICC’s HR staff and leaders. “We have seen a significant reduction in scheduling, phone tag and time wasted on interviewing unsuitable candidates, and an increase in the percentage of successful candidates that make it to face-to-face interviews,” Donaghy adds. “Instead of interviewing 5 or 6 people per role, the team is only interviewing 2 or 3 people.”

One big advantage of a dedicated social media recruitment strategy, he says, is that it allows firms to target “pools of talented people” who may not be actively seeking a new role. “If your company is not on social media, then begin to adopt it,” Spiteri tells The CEO Magazine. “Candidates do as much due diligence on your company as you will do on them, so ensure you’re present if you want to engage with them.

“Have your website, Facebook, LinkedIn and Instagram profiles updated with content available on who you are as a business, what you stand for, the type of culture you have, the projects you are working on, or the products or services you produce.”

“Given you are proactively targeting the ideal candidate, you reduce your overall recruitment expenditure and ensure that the right people are seeing your role.” – Kevin Spiteri, Menace Group

After engaging with candidates via social media, Spiteri advises, you should direct them to a dedicated online portal to initiate recruitment. He says industry best practice, at this point, is for companies to set up a “dedicated landing page” on their websites that outlines the roles, responsibilities and benefits of jobs on offer, along with a strong call to action. “This can be as simple or as creative as you like,” he says.

“You may want applicants to submit a simple cover letter and resume addressing the criteria, or perhaps ask them to submit a video explaining why they would be an ideal candidate.”

An important element not to overlook is interactivity, Spiteri adds, with recruiters urged to stay connected with prospective candidates as they proceed online. In practical terms, Spiteri says, this means making sure firms have enough staff to field questions and comments from applicants.

“Be responsive to these,” he urges. “Thank people who tagged someone they know who may be a suitable candidate, and be present during the outreach and application stage to show that you have truly adopted the real-time nature of digital and social recruiting.”

While Spiteri backs the shift to social hiring, he concedes there are risks. He says one of the big ones is the threat of online criticism of the hiring process. “The risk of digital and social recruitment that may be experienced is the exposure to a business by either ex-employees or ‘trolls’ – that is, people who have a gripe against your business.”

However, he says, the pay-off for companies prioritising digital in today’s ultra-competitive labour market outweighs any potential risks. “Given that you are proactively targeting the ideal candidate, you reduce your overall recruitment expenditure and ensure that the right people are seeing your role.”