The biggest technological change to the way we work since the Industrial Revolution has created an arms race between employers and universities. The future cannot wait. 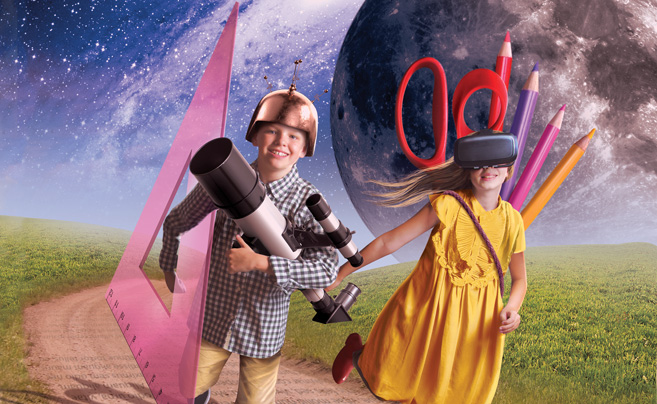 There are myriad videos of the genre floating around the internet — little vignettes which neatly broadcast the way things have changed forever. For example, a baby boy is flipping through a magazine. He turns the pages and slides
his hands over the pictures. Nothing happens so he tries again, faster. It is not immediately obvious what you are witnessing but, eventually, it hits: the baby thinks the magazine is a tablet computer. He’s trying to swipe to make the pictures change. By virtue of physiology, babies are born with under-developed brains but are wired to learn fast.

They are the perfect foils for a
fast-changing landscape. Even as this transformation quickens, education institutions have struggled to keep pace.

The centrifugal force of a technological revolution has had the global effect of carving out middle-tier jobs, flinging them en masse to the top-tier professional services or shunting them back into lower skilled, lower paid work. The result is inequality
and unmet demand from employers who require digital literacy,
hardware proficiency and the ability
to adapt.

The Organisation for Economic Cooperation and Development (OECD)reported in June that, in every one of twenty-four countries surveyed, fewer than half the population could demonstrate problem solving proficiency in a technology-rich environment. In Australia, 38% of 16–65 year olds scored in the top two bands (out of four) while Sweden, New Zealand, Finland, the Netherlands and Norway all scored above 40%. The average was 31%.

Foundation for Young Australians Chief Executive Jan Owen has used the OECD’s own calls for “enterprise skills” to make the case for a new foundation in education. The economy has moved on, however in many developed nations, skills have not.

In Australia the proportion of skilled workers in the labour force has jumped almost 20 percentage
points to 66% in twenty-five years. Half the local workforce is in jobs that will be affected by automation in the next ten to fifteen years. As nations slowly push back pension age, the average 15 year old today in a developed nation will hold seventeen different jobs in five industries over their lifetime.

“This is a much bigger economic trend with big levers like automation, globalisation and collaboration driving this massive change in work,” Ms Owen says. “We are training young people for the wrong things. So let’s look at the demand side. We’ve tested this.

Australia’s internet penetration rate is among the highest in the world at 80 per cent. But Asia is expected to jump to 40 per cent over the next five years, adding hundreds of millions of users globally

“Our work shows for the first time these skills are in massive demand and on the rise and, in addition, employers are willing to pay a premium for them.”

The London Business School’s Professor Lynda Gratton, who runs the international Future of Work Consortium, has watched the world of colleges and universities from the institute over the past twenty-eight years. There is a divergence of views in academia about the scale of change.

Violent upheaval of the Industrial Revolution

Some argue that nothing has been as dramatic and swift as the violent upheaval of the Industrial Revolution. The internet age, particularly in
the last decade, is significant, sure, but it cannot compete with the seismic shift of the revolution. Others say we will only know the contours of the world-defining change through which we are currently living at some point
in the future.

“There has been a debate, despite all the tech developments, I think people are sceptical about the speed of change and there have been periods in our lives where workers have had to deal with much greater change,” Professor Gratton says. “These things often feel they have gone slowly, certainly the impact of learning has been slower than I thought it would be. I am surprised we have not moved further, frankly.”

The London Business School, the top in Europe and ranked third in the world for its MBA program according to the Financial Times, is a face-to-face institution and it won’t be moving to virtual reality any time soon, Professor Gratton says.

“We have constantly re-evaluated our curricula and we re-evaluate it in part on the basis of new developments in knowledge, so for example many of my colleagues are working in labs on micro-behaviours, how people learn and how they negotiate,” Professor Gratton says. “Because we are a research-based faculty, new ideas get transferred into development within minutes.”

Technology, as much as it becomes a means to an end in learning, is also changing the way we work, Professor Gratton says. This necessitates a gear-change in the way we learn, not just what we use to learn. “Augmentation is happening pretty quickly and we are staring down the barrel of the 100-year lifespan,” she says. “We are seeing an elongation of life for many people.

The combination of technological transformation and longevity means that lifetime learning is very high on the agenda. It really is incredibly significant.”

Educators need to do more to ‘gamify’ learning, to move it from the space where the rewards are long term and opaque and give it the immediacy of winning at the game, and at knowledge. “So we need to do more to engage in this development of gamification,” Professor Gratton says. Most people learn from their peers and one of the great possibilities of technology-based learning is to encourage crowd-sourced learning.

The rise of VR to impact learning and development

“Another development is the rise of VR (virtual reality). I have been in a couple of meetings recently on learning and development and the
use of VR and this is amplifying the access we can give students to ideas, data and projects.”

It was once enough to commit discrete packets of information to memory and apply them routinely in a line of work. The future, however, is so nebulous that it is impossible to know ahead of time what will be demanded of you in decades to come.

Those who know what is needed ahead of the universities and colleges are the employers.It was Plato who devised the forerunner of the university, taking knowledge away from the agora and teaching it in his academies. This incubated research and ideas that mattered, that were not polluted by other spheres of life, but some think the isolation has gone on long enough.

Nobel Laureate and Australian National University Vice Chancellor Brian Schmidt doesn’t advocate universities as businesses, though he’d like to see the two sidle up to one another more frequently. “You have got to take some risks in life,” Professor Schmidt says.

“I want to make sure we provide an education which is as good as Stanford, Harvard and Cambridge, making sure the things that happen in the university don’t just stay in the university and that means getting out and sitting next to business and civil society so we can learn how to help each other.”

Globalisation is one of the forces acting not only on the pool of talent, but also on the organisations — both learning and working — trying to attract them.

In another OECD report, China represented 17 % of the world’s graduates in 2000. This will jump to 28 % by 2030. These students are mobile and global. The Chinese economy is also beginning a transformation from low-skill manufacturing output to more complex, advanced and skill heavy industry. The nation is beginning to compete for high-level talent.

The Committee for Economic Development of Australia released a report which deconstructed these global trends. “The amount of money India now allocates to higher education is nine times the amount of previous years, and China’s research and development budget has more than quadrupled,” Deakin University Vice-Chancellor Jane den Hollander writes. This comes at a time when Australian universities face funding pressure and uncertainty with regard to government policy. Professor Schmidt says this only underscores the need for universities everywhere to compete: in the way they teach, the technology and connections available to students and, in outcomes.

Broadband access, VR, augmentation: none of these things are a panacea. OECD research shows that even where advantaged and disadvantaged students have similar access to the internet, they tend to use it differently. Those from higher socio-economic areas or backgrounds are more likely to use the web as a gateway to knowledge, resources and opportunities. Those from poorer families do not do this as frequently, though they do play a similar amount of games online.

Most people learn from their peers and one of the great possibilities of technology-based learning is to encourage crowd-sourced learning.

The ability to think still matters in this new, digitally enhanced paradigm, but never has it been more crucial for people to co-exist with technology.

In January this year, half the workforce in Norway and the Netherlands used search or communication technology at work. The figure is above 40% for countries like the United States of America, Australia, Canada and Denmark. The promise of a tech revolution fuels, as ever, charlatans or miracles with the use of an application or widget, pledging the development of complex skills in three-day courses. It’s a market place to reflect the market place.

US-based workforce analytics company Burning Glass took liberal arts graduates — those not training for specific professions — as a base and found they could almost double the number of job opportunities if they had eight specific skills in addition to their degree.

Most of these skills were technology-based such as IT networking, graphic design, social media, data analysis and computer programming. Of course, many of these skills are more valuable
if they are learned from an early age.

Jan Owens, from FYA, says curricula from kindergarten to the end of high school need an overhaul to embed what she calls “enterprise” skills. “Graduate recruiters are not focused on top marks any more but on leadership skills, capacity to think differently and to problem solve,” she says. “If you have already been engaged in activities outside of your school or college you have probably already learned these skills. Now finally we get to have a joined-up approach.”

The modern era is re-prioritising our cognitive architecture

In the same way that the strange new world into which a child is born forces the brain’s neural networks to mature, forge and adapt, the modern era is re-prioritising our cognitive architecture.

“Neuroscience is pointing to the fact we learn in spurts, which opens the way to short, sharp training, often delivered through your mobile phone,” Professor Grattan says.

“Quite a lot has changed in terms of what we teach. We understand a great deal more about how negotiation is a hugely important factor, collaboration is crucial now. This is the shape of things to come.”

Be the baby: that sponge for new information. Failure to adapt in the new economy is not an option.