Trust, tribes and traction: How innovation can help

CEOs are desperate to increase trust, build their tribes, and get increased traction on results – innovation helps all three. Every year, global marketing consultancy Edelman publishes the Edelman Trust Barometer, its annual measurement of trust based on a global survey. The survey’s Australian 2017 results showed that trust in non-government organisations, media, business and government had fallen significantly compared with the previous year.

In fact, trust in business had dipped below the 50% line into the ‘distrusted’ zone. Further, CEO credibility dropped to an all-time low, and 59% of respondents felt the overall ‘system’ was failing.

The Edelman results are not alone. PWC’s Australian 2017 CEO survey showed yet another increase in the percentage of CEOs concerned about lack of trust in business (63%), higher than the global average. 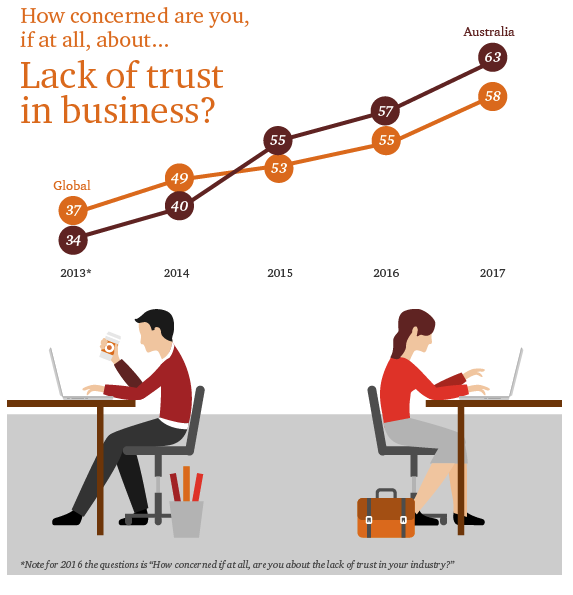 Australia, along with the rest of the world, has developed a trust crisis. A common response to this is for CEOs to try to rally their troops (tribe) around a purpose. That’s a hard thing to do with a sceptical audience.

To top that off, business leaders are now in a time trial to keep up with markets that are shifting fast. Generating traction on new growth initiatives, in the face of this disruption, is now feeling distinctly overdue for many.

This quest for trust, tribes and traction needs some solutions.

One of the ways to help reach these goals is to work more effectively on innovation. While many companies are talking innovation, many are merely doing the ‘idea thing’; far fewer are launching those ideas.

When you teach a daughter, son, niece, nephew or neighbour to ride a bike, you can instruct the young rider as much as you like but they’ll never learn to ride until they actually get on the bike. You start by holding them and issuing lots of advice but both of you know that they ultimately have to stay upright by their own effort.

We need innovation teams to ride their own bike; we can’t keep holding, controlling, catching and admonishing them to avoid falling.

Trust comes from letting the innovation teams go, and giving them autonomy and ownership. You can’t build trust unless they feel trusted. This trust is best built bottom up, with small teams to spread it. Have you ever seen the top-down ‘you can trust us’ message work? Deeds and actions, not words and music.

The rider is trying to work out how to balance, move forward, steer and brake. Their primary feedback loop is making mistakes and trying again, slightly differently each time. Sometimes success comes early, but there is always learning.

With this learning, often the rider can go on to develop more advanced skills than even the mentor’s, perhaps riding the half pipe at the skate park. The power of tribe innovation beats any attempt at hierarchy innovation. It generates better traction on new revenue.

Trust, tribes and traction are built when developing leaders have this sense of contribution to direction, and the positive change that comes from innovation.

But does that mean we let go of the bike with no safety rules in place before we get a strong sense that the riders won’t fall? No. There are helmets, road rules and directives on where they can and can’t ride. We aren’t going to innovate a new food product in a financial company. So how do we do this?

Here are some key elements:

To build trust, tribes and traction, get your innovation teams purposeful, protected and performing.

Paul Broadfoot is an entrepreneurial strategist who mentors leaders and their organisations on disruptive innovation, business model innovation and intrapreneurship to create new growth.