The discussions focused on ways to develop bilateral relations, including cooperation on maritime security in the Gulf of Guinea. 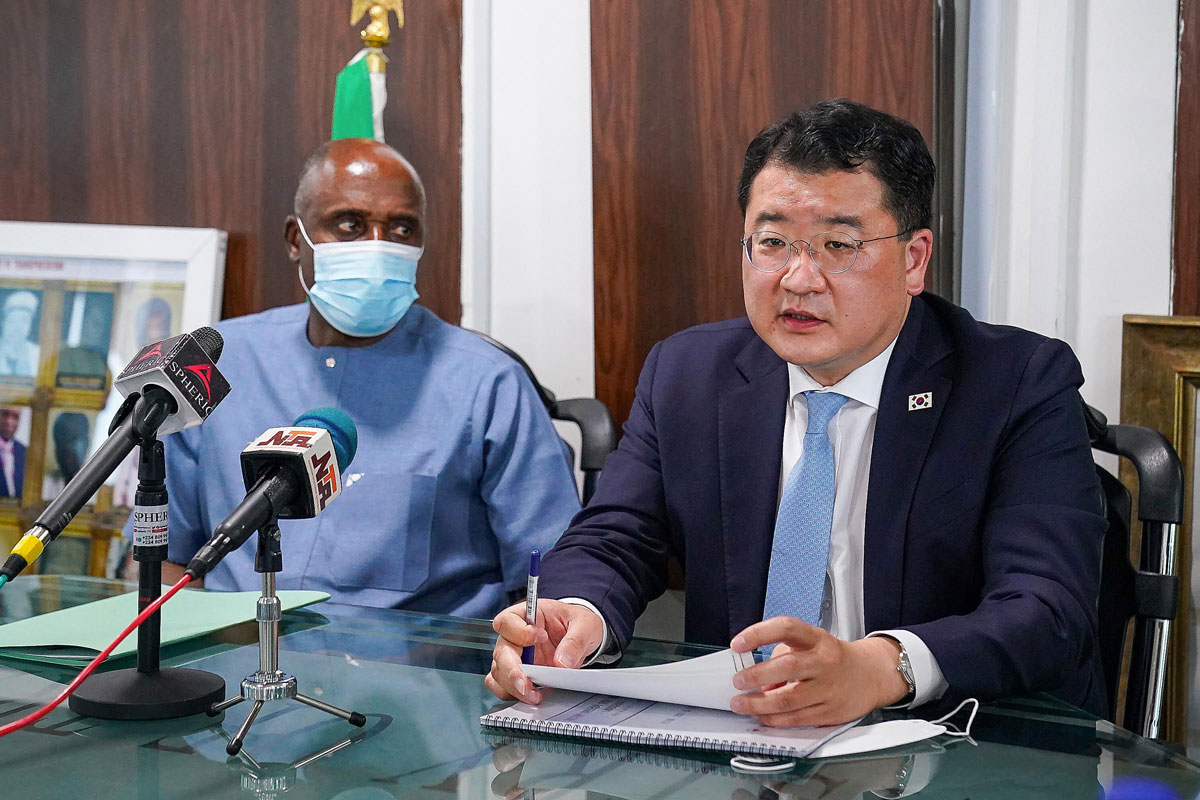 Foreign Minister Choi Jong-gun visited Nigeria on his last visit to three African countries – Morocco, Senegal, and Nigeria between August the 14th and 19th this year. This visit was the first visit of the Korean Vice Minister in West Africa.

In a series of engagements with the Minister of Defence, Major Geneneral Bashir Magashi (rtd); Minister of Transportation, Rotimi Chibuike Amaechi and the Minister of State for Foreign Affairs, Ambassador Zubairu Dada, a meeting was organised and held on the 19th of August 2021.

The discussions focused on ways to develop bilateral relations, including cooperation on maritime security in the Gulf of Guinea.

The two sides agreed to further expand economic cooperation while agreeing that there is a great potential for cooperation between Korea, which has technological prowess, and Nigeria, which has population and resources.

During the talk sessions, both sides agreed the need to reorganise all agreements, such as the double taxation prevention agreement and the revision of the investment protection agreement, under the common recognition that it is important to prepare an institutional basis for expanding economic cooperation.

Despite the huge investments made into the country over the past decades, Nigeria is yet to benefit from the global conglomerate’s skills and technology transfer as well as the foreign investor’s huge investment potentials. This is because the government has yet to give them the necessary incentives and support even though these types of companies are already in the country.

The issues faced by foreign investors in Nigeria is not just limited to Korean companies. For instance, Africa’s biggest grocery retailer and South African-owned chain of stores, Shoprite, announced its exit from Nigeria after 15 years of operation.

Nigeria’s Minister of Industry, Trade and Investment, Otunba Niyi Adebayo, in April had lamented that the trade between both countries had slumped by 74 per cent from $5 million in 2018 to $1.3 million in 2019.

Adebayo, who spoke when he received the South Korean Ambassador to Nigeria, Kim Young-Chae, in his office, had noted that both countries shared strong economic and investment ties with over 20 Korean companies, including Samsung Heavy Industries and Hyundai Heavy Industries, presently operating in the country.

One notable mention at the meeting was Samsung Heavy Industries Nigeria who have been involved in a protracted dispute with its local partner.

With the visit of the South Korean First Vice Foreign Minister to Nigeria, it is expected that the Nigerian government will address the challenges facing the South Korean companies operating in Nigeria.

Samsung Heavy Industries (SHI) is one of the global conglomerates and reputable investors from South Korea that has established a strong presence in Nigeria. SHI established its subsidiary, Samsung Heavy Industries Nigeria Limited (SHIN) 10 years ago and made an investment of over $300 million dollars in Nigeria to construct West Africa’s most advanced fabrication and integration yard.

Through Egina project, Samsung Heavy Industries Nigeria employed over 3,000 Nigerians and spent 560,000 man-hours training locals with no prior experience in the shipbuilding and welding industry. It is widely known that over $1.6 billion in economic contributions was made through the project.

The past 10 years has not been a smooth sail for SHIN though as the company is not insulated from the challenges in the Nigerian operating environment. Despite the challenges facing its operations, SHIN has remained undaunted due to its faith in Nigeria and its long-term commitment to the country.

Commendably, the Nigerian Ports Authority (NPA) had granted a direct lease to SHIN for the SHI-MCI yard in Tarkwa Bay Lagos, following an investigation by NPA which concluded that its local partner had infringed contractual obligations resulting to the revocation of their Lease with NPA.

Currently, the Lagos High Courts have upheld this decision and it would be pivotal for the Federal Government to respect these judgements in order to give confidence to foreign investors.

The decision of NPA was not just for the protection of the foreign investors to enable their long-term stable operation, but is essential for Nigeria and its economy.

To ensure Nigeria benefits the most from the presence of the foreign investors through industry training and skill transfer, the Federal Government should, also in return, provide the enabling environment for the investors by guaranteeing the protection of the investments and operations in the country for at least 20-30 years.

This will enable Nigeria to take a big leap forward in technological advancement and social development.

During the meeting, both sides also agreed to hold the sixth Korea-Nigeria Joint Committee in Korea in the near future to discuss issues of common interest.

In addition, both sides also decided to continue high-level exchanges by taking advantage of opportunities such as the UN Peacekeeping Ministers’ Meeting to be held in Seoul in December 2021, and the Korea-Africa Forum.

In view of the peculiar challenges facing Samsung Heavy Industries Nigeria in its operational base in Lagos, which has become protracted, the company needs urgent support from the Federal Government agencies. The Federal Government and Ministry of Transport should endeavour to make the necessary efforts to protect the Foreign investor and restore confidence to the Korean Government.

With the visit of the South Korean First Vice Foreign Minister to Nigeria, it is expected that the Nigerian government will address the challenges facing the South Korean companies operating in the region. Industry experts and stakeholders will be hoping for swift actions from the Government to implement these protectionist measures in order to fast track beneficiaries to the Nation.