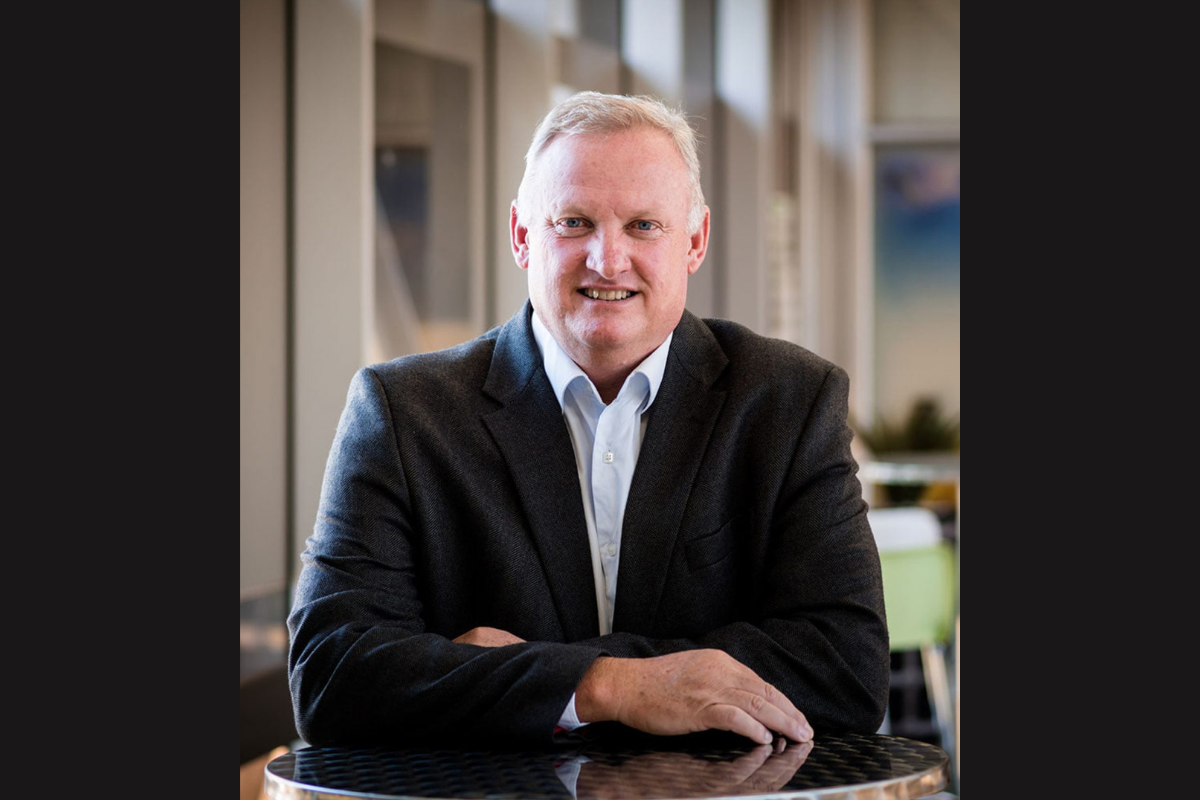 There’s a catchphrase that Francois Strydom often uses with his leadership team. “I tell them that I’m very thankful, but I’m highly dissatisfied,” the Senwes Group CEO explains to The CEO Magazine. His company may be one of the largest and most successful names in agriculture in South Africa, but he sees part of his role as always having one eye on the work that needs to be done. “I can never be satisfied with where we are,” he says.

Francois has been with the business for 20 years, including 12 as Group CEO, so he knows exactly where its strengths and weaknesses lie across its four pillars of business – input supply, market access, financial and technical services and processing, conditioning and markets. “We’re a commodity-based group, so we have to always think about risks, as well as how we can further integrate all the different companies within our portfolio,” he says.

But he’s also careful not to fall into an easy trap as he contemplates a path of future growth. “We have to distinguish between temptation and opportunity, two things that look almost the same but are vastly different in business terms,” Francois says. “Always ask what the risks are and you’ll find yourself saying no more than you will say yes.” Such sage business philosophies are what have proven to be a steady hand when the business most needed it. Founded in 1909, Senwes’s origins lie in a farmers cooperative that went public in 1996. His arrival as Chief Operating Officer five years later came at a time when the company was “in a terrible mess”. “Along with the CEO that I reported to, we were headhunted specifically to turn it around,” he says. “The CEO’s specific task was to resuscitate it and save it from the operating table where it lay almost dying.”

It took five years to bring Senwes back to life, and another five to “catch up, clean out the portfolio, and almost normalise the company within the sector,” Francois says. And that was the state of play when he took over as CEO in 2010. “We’d already done the turnaround. What we then had to do was bring very strategic clarity to the company,” he says. 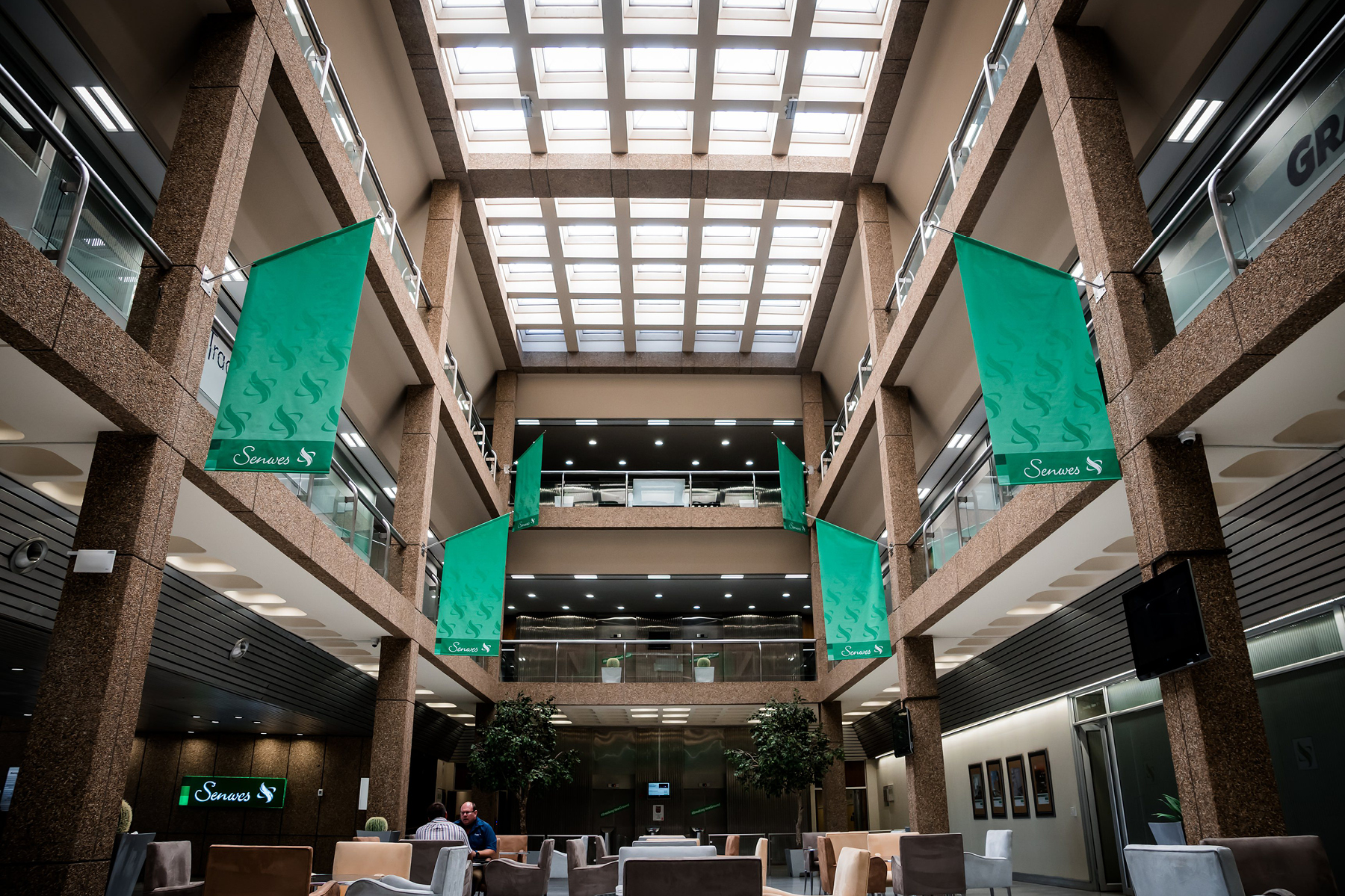 I believe modern, growing, dynamic organisations need to filter ownership to a much broader and bigger portfolio of people.

The first mission was to update the company’s structure. “That command and control model where everything depends on the CEO is not sustainable anymore,” he says. “So, first of all, we had to create a broader layer of responsibility because I believe modern, growing, dynamic organisations need to filter ownership to a much broader and bigger portfolio of people.” Currently, across all the companies in the group, there are 100 positions of leadership for 5,100 employees.

According to Francois, the second anchor point was not to predict the future but to design it. “We needed clarity on how we thought our future would look and how we could build the company in that designed future,” he says. To get to that point, Francois and his team worked on identifying main topics, analysing them and speaking to the relevant global experts. “Once you grab that concept, you can then have a rolling 10- to-15 year view,” he says, which is a long-term timeline in his business. “When you work in the agribusiness, almost all of the investments you make are around assets and intellect, and they have a longer period of repayment from a return-on-investment perspective.”

Now back in robust health, Francois is focusing on making Senwes the consolidation platform of choice for its clients. “The agribusiness industry has gone through drastic consolidations,” he says. “Thirty years ago we were more than 45 players, now we are less than 10.” In order to position the company as such, he says critical mass is one of the rules of engagement. “And you have to combine that with a very strong support service capacity and a strong culture of ownership, of dedication to your drivers and your attitude towards your customers.

“In other words, you do not do a deal with a customer over the table. You move around the table and sit next to your customer and look at his business. You ask how you can enable their business. Because if you do that their business will grow and yours will too as a consequence.”

Another key value is to not compete with its client base. “So, if we provide inputs to farmers, we cannot be a farming business ourselves. If we provide raw material to the processing industry, we cannot be a miller and crusher ourselves, because that would be crossing a line,” he says. “We play a role within a value chain, we do not build across it.”

Senwes today operates in 298 locations in seven of South Africa’s nine provinces. Having reached a point where the company is “by far the leader in our specific sector”, Francois explains that expansion is the next logical step. “We have achieved a level of maturity where we cannot grow bigger in our specific sector so we are looking at our core strengths and how we can apply them to other territories,” he says, adding that they are currently in the process of researching, analysing and negotiating deals in Eastern Europe in particular.

Such strategic positioning would allow Senwes to become a player in both hemispheres.“It’s anti-cyclical and anti-seasonal and allows us to diversify in terms of commodities, clients, seasonality, geography and brands,” Francois explains.

A grasp on opportunity

Francois says that he and his leadership team didn’t see the COVID-19 pandemic as a challenge but rather “an opportunity to move when others pulled back”. “We didn’t preserve our reserves, we kept on investing in our strategy and applying our capital reserves to build the company,” he says.

As such, the company has emerged in a stronger financial position than before it. “We’ve been able to reposition the company from a US$350 million [€326 million] net profit organisation to a US$500+ million [€467 million] net profit company,” he says. It’s an achievement he says speaks volumes for not only good commodity pricing and climatic conditions but also the diversified and de-risked Senwes portfolio. “It also says a lot for our leadership group who really took on those challenges.”

Francois also explains that there’s an inherent strength that comes from being a business executive in South Africa, something that came to the fore during the health crisis. “South Africa is a country where much of the infrastructure has been destroyed and there’s no subsidy system for primary production and no security,” he says. “So you have to work with all these additional factors besides your core business.”

The result is a special kind of business personality. “We are tough and can fend for ourselves and we’re very compatible to change,” he says. “You’ll find South African business people operating very successfully in almost any part of the globe but when people come to try and do business here, it can be a hell of a challenge for them.”

There’s a lot of behind-the-scenes work to ensure this happens. “Take John Deere, for example,” Francois says. “It”s an international company with agencies that market its products worldwide. It has a scoring system that measures and benchmarks its agents on different levels.” The goal for Francois and his team is to be the best in each one of those aspects – “in new product sales, in second-hand product sales, in sales of spare parts, in workshops, in precision and in technology”.

And to get there, they’re not afraid to approach John Deere directly. “We will typically ask to be shown the best performers in each of those sectors. We’ll go to them, study their behaviour and try to reposition ourselves in every aspect of our interaction with this partner in the top five per cent,” he says. Partnerships are better than purely business relationships. They make everyone part of the same dream.

Such a strategy has its added advantages. “What you also achieve is to better your business and, therefore, better your financial results,” Francois says. But it elevates the success of partners, too. “When there’s an opportunity, they naturally look towards their top performers,” he says. “That’s why partnerships are better than purely business relationships. They make everyone part of the same dream.”

And from there the benefits flow, from geographic expansion to a broader range of products and better sales conditions and terms. “Those transform to better numbers, it’s as simple as that,” Francois says. In the specific case of John Deere, from the early days marketing only its agricultural range, Senwes has now been entrusted with mining, construction and forestry equipment as well. “We’ve also been given new territories within South Africa and are looking at expanding our business further through that,” he says.

Such an example is just one aspect of Francois’ overarching ‘give and take’ philosophy. “If we can provide solutions and products to build our customers’ business, that in turn will build us,” he explains. The learning is one that came from his personal life but has inevitably crossed over into his professional world. “If you act a certain way in your private life and then carry yourself in a different way when you are in a company, it leads to absolute disaster. You have to sort out yourself before you can sort out your role in a company.” The Four Pillars of Senwes, Explained

“Through our four pillars, we provide businesses, products and services,” Francois says. He explains them as follows:

Market access
Linking the farmer’s product to the processing industry through storage and logistics.

Financial and technical services
Exclusively providing financial services to the client base.

Processing, conditioning and markets
Preparing raw products through the first step of beneficiation for wholesalers who will then onward sell it to the retail industry.

The key, Francois explains, is asking yourself a difficult question: “Why am I?” “In our case, we exist to help others build a business. And that comes back to us. It helps us to develop,” he says. “Otherwise, you only think about money and what it offers to you and that, in the long term, is never sustainable.”

This outlook extends to his team at Senwes as well. “If you positively contribute to the full portfolio of your staff’s lives, helping them to be healthy, balanced and forward-looking individuals, then they will contribute to the growth of your business,” Francois says. “Help others fulfil their dreams and, as a result, we will fulfil ours. That’s the central part of my leadership outlook.”

The bank with the largest exposure to agriculture in South Africa, Absa aims to be a positive force in the markets it does business in. 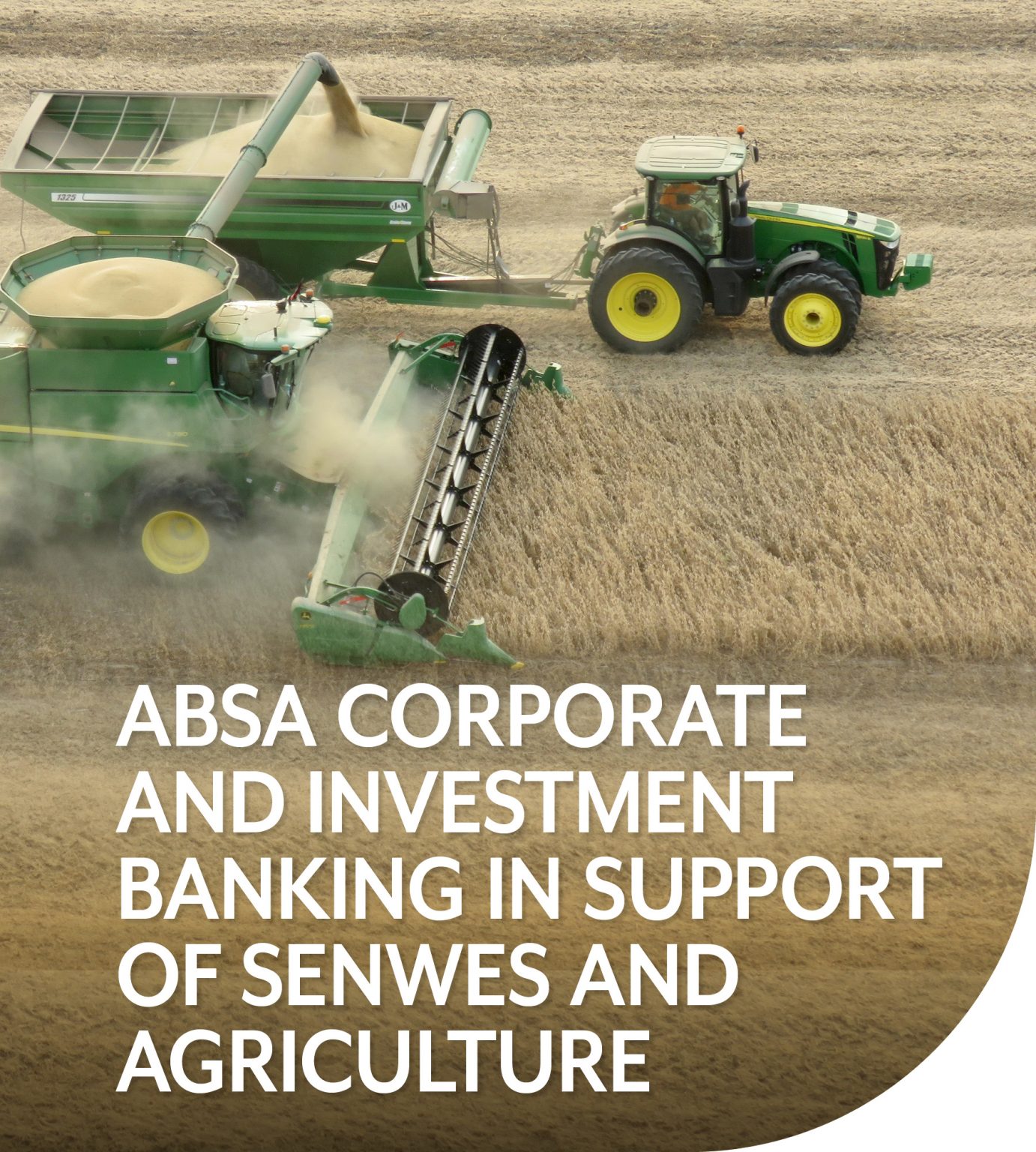 Through its bigger-picture banking approach, Nedbank Business Banking leads a revived strategy to increase its brand presence and contribute to the agricultural sector.