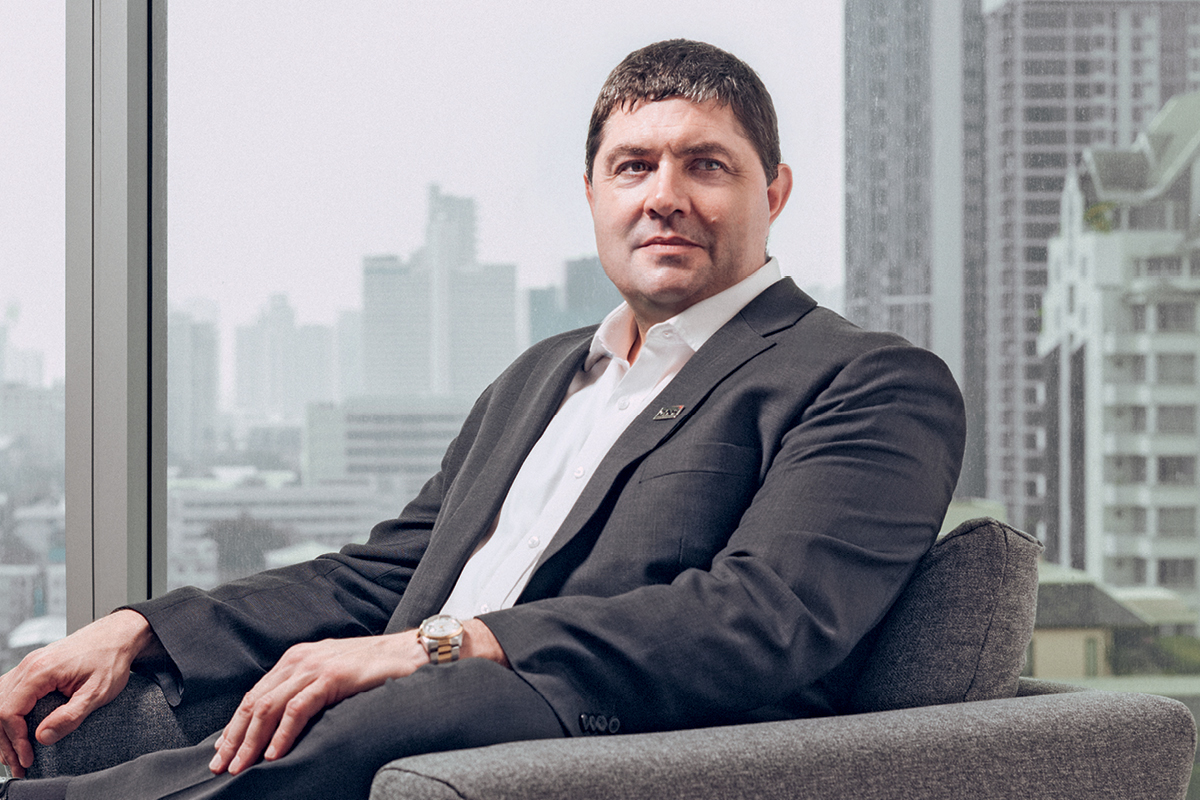 When Mark Brinn was a young university graduate, he had no idea that he’d wind up running a multibillion-dollar company. After studying agricultural engineering, he landed a job working on a farm in Lincolnshire in the United Kingdom.

As Mark spent his days driving a tractor through the lush English countryside, never in his wildest dreams did he imagine that his agricultural career would take him to a high-rise office building in Bangkok.

Two decades on, Mark is Managing Director for South-East Asia and Japan at CNH Industrial, a global leader in the capital goods sector that designs, manufactures and sells agricultural and construction equipment, trucks, commercial vehicles, buses and specialty vehicles. “My advice to anyone is to aim high,” he advises. “You should always aim high.”

“My advice to anyone is to aim high. You should always aim high.”

Following a brief stint working at an agricultural implement company, Mark joined CNH Industrial’s manufacturing plant in Basildon in the UK. Not long after, he jumped at the opportunity to take up a role in Singapore.

“I got posted to the Singapore office, which was quite a small operation then, but for me it was a huge career leap and a massive culture shock – being a small boy from Lincolnshire going to a big city. That was my first big milestone in the company,” he reflects.

Six years in Singapore was followed by five years in Shanghai, which Mark describes as “another big cultural shock”. He moved to Bangkok in 2010, where he held various positions before being appointed Managing Director in 2015. “I was always aiming to become Business Director for agricultural equipment in the region, but I did that for a relatively short period of time.” Having worked for various divisions of CNH Industrial for “20-odd years”, Mark says he pretty much knows the agricultural side of the business inside out. “The business has grown around me,” he laughs. “Our core business in South-East Asia is agriculture machinery. Traditionally, it’s been tractors, but we’re expanding our portfolio in the region to include other machinery such as rice and sugar cane harvesters.”

The company also sells commercial and specialty vehicles with IVECO, IVECO Astra, IVECO Bus and Magirus brands and along with a broad portfolio of FPT Industrial powertrain applications.

“We’ve got quite a good name with some of our off-road vehicles, but we’re still not a well-known brand in South-East Asia in heavy construction machinery,” Mark says. “So one of the upcoming challenges is growing this business and the IVECO name in the market.”

Since joining the Bangkok business nearly 10 years ago, Mark has witnessed huge growth in the region. “When I first came here, the Bangkok office had been open for just a few months and there were only six of us working here,” he says. “Now we occupy a full floor of an office building, and across the two locations we have about 150 employees in Thailand.” He adds that there’s scope for plenty more growth. “I always say to my colleagues that South-East Asia is a sleeping giant,” Mark says. “If you look at the TIV (total industry volume) of tractors, the entire market is huge and there is hope for continuous progress in this area. South-East Asia is a market with big potential for all of our products.”

While growth is important to Mark, he points out it needs to be carefully considered. “We’ve got to grow, but we’ve got to grow smart,” he says. “It will be about bringing in some different products that are more suitable for the markets and looking at expanding our regional presence here.”

The team at CNH Industrial aims to deliver quality products at competitive prices but, most importantly, they want to ensure their customers continue to be well-supported after they have purchased a product.

“Our goal is to be the best in class on after-sales support,” Mark says. “For instance, in Thailand, because it’s a market we manage ourselves, we call the customers to follow up and make sure they’re happy with the product. The aftermarket support is the most important part to make sure our customers keep coming back.”

“I might be Managing Director of this region, but I still have people to answer to and we’re always pushed to deliver better results. The challenges keep coming.”

Mark explains that CNH Industrial works closely with its distributors to provide this aftermarket support. “In the agricultural business across the region, Sime Darby Industrial Sdn Bhd and PT Altrak 1978 have been our partners for 40 years. We really rely on them to be the eyes and ears of the respective markets in which they operate as our importers, which are Malaysia and Indonesia, and support our customers,” he says.

“On the IVECO side of the business, we’ve been doing business in Indonesia with PT Chakra Jawara for 20 years. They provide excellent after-sales support to our end users and we wouldn’t be where we are today if it wasn’t for these people,” he adds.

“On the construction side of the business, we’ve been partnering with the Sunway Group for four or five years. As we’re starting to grow the business, they are our eyes and ears and our support in the market. CNH Industrial would not be where it is today if it weren’t for our distributors.”

Which person inspires Mark the most?

“I really admire Sir Clive Woodward because he had a five-year plan and he delivered his plan to the letter,” he says. “He was England’s coach when they won the Rugby World Cup in 2003.”

“We already have a commercial range of CNG (compressed natural gas) and LNG (liquefied natural gas) trucks and buses, and we’ve got electric buses,” Mark explains. “We’re very focused on reducing the impact of our products on the environment once they’re retailed to the customer.”

Meanwhile, CNH Industrial is also developing ways for farmers to use technology to help optimise their land use. “There’s a product that can measure the soil temperature and moisture, and give the farmer data that can help with planning cropping and harvest cycles. This is very new technology,” Mark notes. “As you know, South-East Asia is a developing market, so the impact is limited now, but it’s where we’re headed.”

“Obviously, we have to keep growing and we have to remain profitable, but that won’t happen if our customers and dealers aren’t satisfied.”

While some executives might use KPIs or financial results to measure their success, Mark’s formula is much simpler – he just wants his customers to be happy. “Customer satisfaction is so important. I’m enthusiastic to go and visit customers and see that they’re very happy with our products. I also have strong business relationships with my dealers and it’s great to see that they’re really satisfied with our products too,” he enthuses.

“Obviously, we have to keep growing and we have to remain profitable, but that won’t happen if our customers and dealers aren’t satisfied. It doesn’t happen very often now, but I love it when I actually get out on the construction site or the farm and meet our customers. It’s fantastic.”