India’s extensive railway system is one of the world’s largest and most used transport networks, accommodating more than 8.7 billion passengers and some 106 million tonnes of freight each year, according to the World Bank. Combining his extensive experience in the rail sector with his proficiency in finance, technology, and mechanical engineering — Bharat Salhotra was exactly the type of leader that Alstom needed.

Bharat has a diverse and impressive background, graduating as a mechanical engineer from the Punjab Engineering College, with MBAs from the Indian Institute of Management and MIT’s Sloan School of Management. He went on to develop the first-ever digital financial processing system for the rail sector, authored a national policy-changing case study on India’s first public–private partnership initiative in the port sector, and helped to develop India’s dedicated freight rail corridors with Railway India and the World Bank, all before being headhunted as the new Managing Director of Alstom India.

As a promoter of sustainable mobility, Alstom develops and markets systems, equipment, and services for the railway sector, with solutions ranging from engineering new trains and infrastructure, equipment maintenance, and modernisation, to signalling solutions. Bharat has spent the past few years mobilising the Alstom India team, winning new bids and growing the organisation, while simultaneously continuing to support access to efficient and cost-effective rail travel across the sub-continent. With Alstom based in France, Bharat has since been appointed Chevalier de l’Ordre National du Mérite (Knight in the National Order of Merit) by the President of the French Republic in May 2015 for outstanding achievement in the field of business and commitment to Indo-French relations.

“There was not much happening — no big wins or new projects. I saw a company that was not aggressive enough and lacking in a hunger to win, and I wanted to make a difference” – Bharat Salhotra

“When I joined Alstom, the business had been around for more than 100 years, but it had little presence in transport because of a late entry into the market. The first project Alstom won in the Indian rail transport area was around 1996, and before then it had been driven mostly from overseas,” says Bharat. “Back then it was a company of 350 people and not considered very active. Now it has more than 2,000 employees, and we are working to get Alstom India to a leading position by 2020, making a significant contribution to both the global top line and the bottom line.” When Bharat first came on board in 2013, the company hadn’t won contracts since 2010, and it was common practice for the business to bid only two-to-three times a year. By July 2014, Alstom was submitting close to seven bids a month, winning six out of seven contracts.

“After 2010 until about 2013 there was not much happening — no big wins or new projects. I saw a company that was not realising its full potential, and I wanted to make a difference,” Bharat says. Alstom India’s new wins include the largest railway contract ever won by Alstom globally — a power supply contract with signalling and electrification solutions to be deployed along 340 kilometres of the Eastern Dedicated Freight Corridor of the Indian Railway Network. Under a transfer of technology agreement, Alstom has also provided rolling stock for Shatabdi and Rajdhani trains, which include Alstom-designed LHB coaches.

Alstom was recently awarded a contract by the Ministry of Railways to manufacture and supply 800 twin-section, 12,000 horsepower, electric locomotives to Indian Railways between 2018 and 2028 at a cost of about Rs. 200 billion, as well as the associated long-term maintenance. This project also involves the construction of a suitable electric locomotive factory, built at Madhepura in Bihar as part of a joint venture between Indian Railways and Alstom Manufacturing. Two maintenance depots will also be built at Saharanpur in Uttar Pradesh and Nagpur in Maharashtra.

“This happens to be the largest contract ever awarded by Indian Railways to any private player, and represents the largest locomotive contract ever won by Alstom globally,” says Bharat. Alstom has now become a leading supplier of train control systems for metros in India.

“We have had some fantastic success thanks to a very dynamic team effort, and in the process we have gone from being practically unknown, to a point where Alstom is recognised for reforming rail transport.” Alstom India has also been committed to not just its own growth, but also to growing India’s capabilities in manufacturing and engineering, and increasing the region’s competitiveness for investors and businesses.

Since Bharat was appointed MD, Alstom has added more than 1,200 engineers to its twin innovation hubs in Bangalore. Alstom has also established manufacturing facilities in Sri City and Coimbatore, along with an engineering and R&D centre in Bengaluru, comprising 800 specialists working across rolling stock, signalling projects global, and IS&T operations for India, South Asia, and beyond. These facilities are helping to drive the development of end-to-end solutions for local and global markets while aligning the business with the Made in India initiative. “You want to lead your own market, but beyond profitability we must encourage reinvestment in India and grow more here,” says Bharat.

“I tell my team, you’re not bidding for contracts, you are bidding to drive our economy and improve the lives of 1.25 billion people in the country.” – Bharat Salhotra

“I had the honour of standing beside Venkaiah Naidu, Minister of Urban Development of India, when he unveiled the very first Made in India train, supplied by Alstom for Kochi Metro,” says Bharat. Alstom was awarded a contract to supply twenty-five state-of-the-art Metropolis train sets for Kochi’s metro system. “That was the first metro designed and delivered in India, fully designed by Indian engineers, and manufactured by our own team, so it’s truly a Made in India first.” Similar to the electric locomotive factory in Madhepura, Alstom is responsible for heading up the design, manufacturing, supply, installation, testing, and commissioning of the twenty-five standard track gauge trains for the Kochi Metro Project, which has also contracted Alstom to supply signalling, telecom, and electrification solutions.

Made in India initiative

“All of these projects are an investment born from the Made in India initiative, and we are practicing that on a day-to-day basis.” Bharat has also been encouraging the use of an Alstom lightrail turnkey solution for Tier II cities in India, resulting in Trivandrum, Kozhikode, Nagpur, and Delhi suburbia now actively looking at introducing Alstom’s Axonis Light Rail Transport solution. “It has been a fantastic experience growing the business and securing all these new wins. But in truth it was a great team effort. Everyone has contributed to our achievements,” Bharat says. “We have transformed ourselves from being a small player to driving the epicentre of growth and action in the Indian rail sector.”

Bharat says that success is always connected to a team, never an individual, and can only be accomplished if many people work together to make things happen, including with different individuals, teams, organisations, and partners. “Every member of my team is just as important a player as I am, if not more. People just need to be given the flexibility to operate, because everyone wants to contribute to success,” he says. Alstom India now defines success as an unintended consequence of the business activities and outcomes, which Bharat says everyone is always happy to pursue so long as these outcomes also expand beyond individual goals.

“I tell my team, you’re not bidding for contracts, you are bidding to drive our economy and improve the lives of 1.25 billion people in the country,” he says. “When you connect people to the larger picture and higher aspirations, then the energy and momentum that build up in the team are unmatched.” This mindset also drives Bharat’s belief that leadership cannot be accomplished from the front, with a need to move away from the traditional command and control structure towards a culture of cultivation and collaboration. “People push to lead by marching at the front, but then they look back, and there is no one behind them. It’s important to be behind the people, to work as a facilitator and an enabler, and to create an environment where everyone is able to operate at 200 per cent of capacity.”

The same applies to relationships with key suppliers, with Bharat believing the only way to establish and maintain competitive advantage is to optimise supply chain partnerships. “Core development and collaboration across the supply chain means not treating them like they are your slaves. Our relationships with suppliers have grown into partnerships,” he says. “For a train, 70 per cent or more of its parts are bought from suppliers, so suppliers are crucial for our future growth.”

Bharat believes that success is a result of real commitment, and compliance alone is not enough. “How do we get ourselves to commit to something, and to collectively move towards achieving an objective? Find the answer, and you can succeed,” he says. “Success doesn’t happen when the CEO comes in, success happens when every single person gets a fire in their belly.” 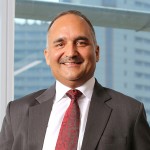