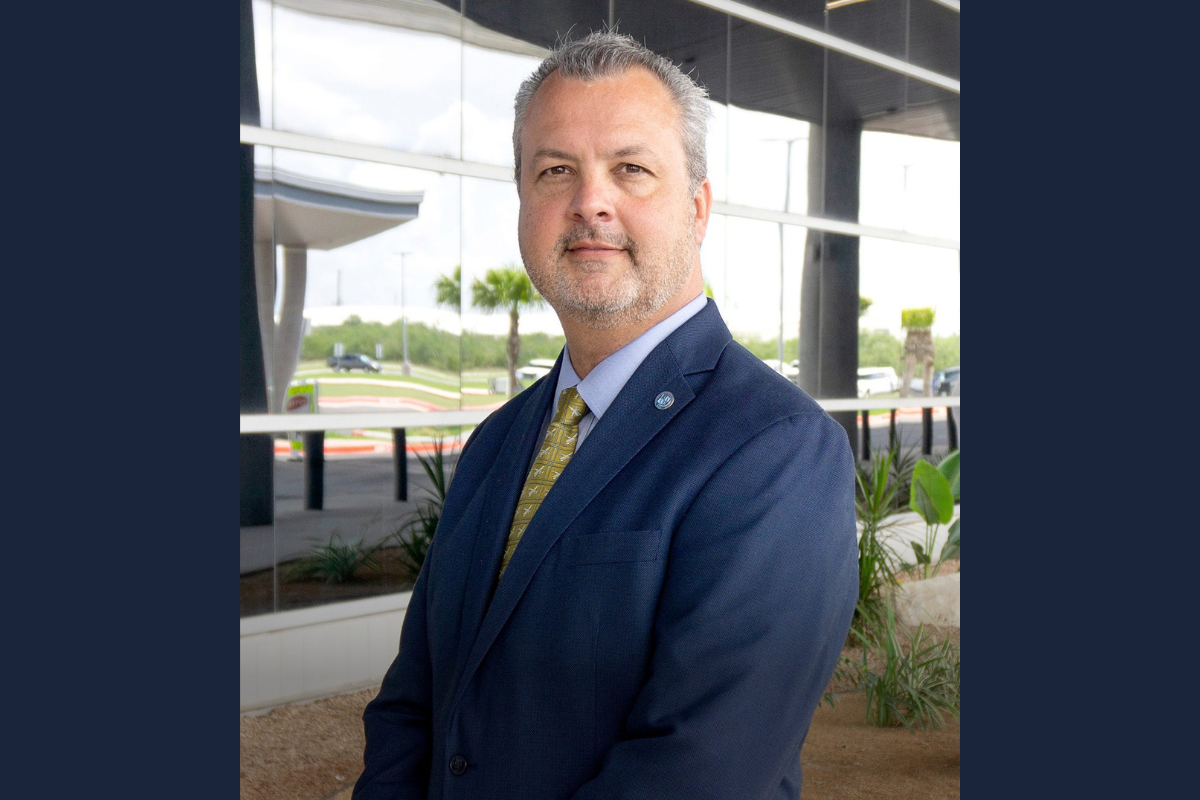 When the Brownsville South Padre Island International Airport (BRO) management team started planning the construction of a new passenger terminal in 2016, they knew there was only one man to lead the project.

Bryant Walker’s passion for aviation is in his DNA. His grandfathers were pilots in World War II and the Korean War, and Bryant can’t remember a time when he didn’t want to be a pilot, too. After obtaining his undergraduate degree in Airport Management and Flight Operations from Jacksonville University, he finally got his pilot’s license.

“My intent was to fly for an airline,” he says. “Then 9/11 happened and people were being furloughed. I had a degree in aviation, so I figured I should put it to use as an airport administrator.

“I did an internship in Jacksonville before moving to Philadelphia in operations. It’s a large hub airport with very congested airspace, so I got an amazing amount of experience there.” 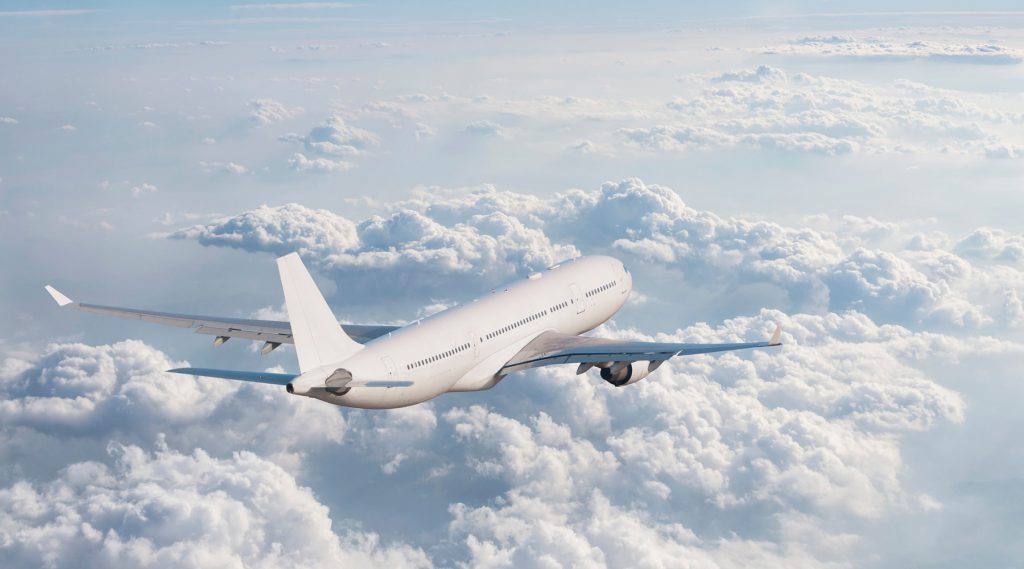 They wanted to build a terminal that reflected the modern world with a bit of the community style in it.

After taking on diverse roles at airports across the country, Bryant was recruited by BRO to oversee the construction of its state-of-the-art terminal. “They wanted to build a terminal that reflected the modern world with a bit of the community style in it, and then completely demolish the old terminal that was built in 1972,” he says.

“The maintenance was getting out of control and it wasn’t worth rebuilding. It was built before 9/11, so security measures weren’t in compliance, and the Customs and Border Protection’s Federal Inspection Station didn’t meet the minimum standards. The airlines were also really congested because the airport only had two jet bridges.”

Progress through the pandemic

At 91,000 square feet, the new terminal would be nearly two-and-a-half times the size of the old 37,000-square-foot building and feature four jet bridges. When construction started in 2017, the project was expected to cost US$50 million, but the final price tag rang in at just over US$70 million.

“We ended up putting in more modern and energy efficient finishes, including LED lighting and electrochromic glass, to control heating and cooling much better,” Bryant explains.

“COVID-19 also hit during construction, so we used antimicrobial silver ion technology on all the tables and installed HEPA filtration and needlepoint ionization in the air handling units to clean the air.”

Instead of slowing down construction of the terminal, the pandemic sped it up. “It was a federal project that was partly funded by the Federal Aviation Administration, so it needed to keep going,” Bryant says.

“We set up temperature screening stations and symptom questionnaires for our contractors and they either wore masks or practiced social distancing depending on the section of the terminal they were working on.”

Even at the height of the pandemic, BRO never shut down and the demand for flights remained relatively steady. “At the lowest point, we dropped to about 60 per cent of our previous year’s capacity,” he says. “We were still operating in the old terminal while the new one was in construction. 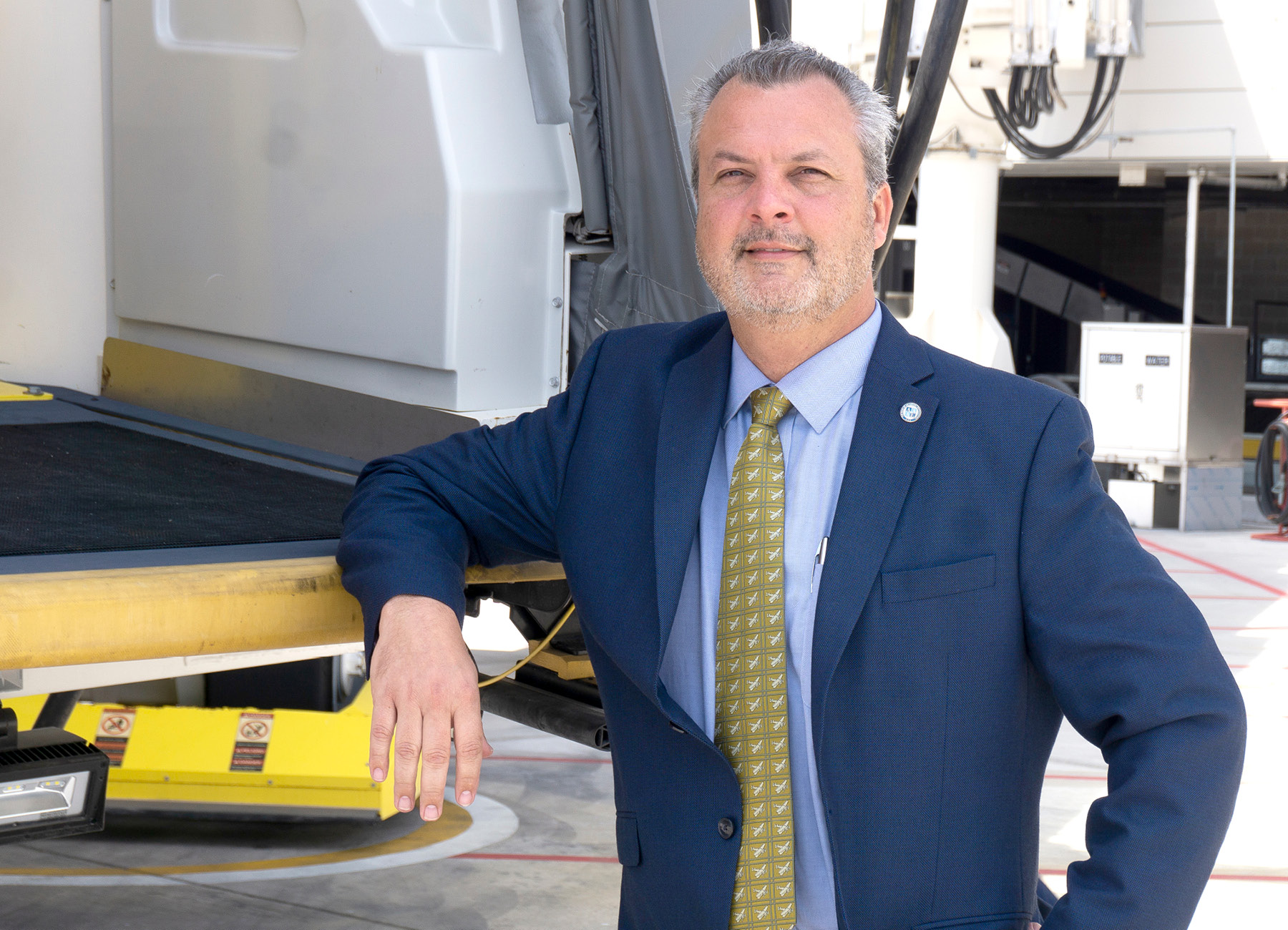 We had new city leadership come in that was very motivated to be progressive. We also have SpaceX right next door and we provide flights for them. All of that has come together to create the synergy of progress, development and opportunity.

“We had to bring in staff from other city departments that were shut down, such as libraries and parks, to help us screen passengers and sanitize the terminal. That worked well because we got additional assistance and we didn’t have to lay anybody off from the city.”

The new terminal finally opened its doors in January 2021 with new and frequent flyers “blown away” by the modern facility. “There’s a feel of innovation and growth in Brownsville that you don’t see at our competitors’ airports,” Bryant explains.

“We had new city leadership come in that was very motivated to be progressive. We also have SpaceX right next door and we provide flights for them. All of that has come together to create the synergy of progress, development and opportunity.”

While the terminal is fully operational, Bryant says there are still finishing touches to be done. “We’ll be opening a restaurant in the next couple of months,” he reveals. “We’re currently expanding the parking area and we’re looking at adding a couple more gates because we expect traffic to pick up that much.”

With the four-year project coming to close, Bryant and his team have innovative plans to further develop the airport’s reach and capabilities.

I think people still have this Wild West perception of Brownsville, but it’s not. We’ve caught up to the rest of the world and in some cases we’re leading the way.

“We want to expand into the leisure travel market and low-cost carriers given that we’re the closest airport to South Padre Island,” he points out. “We’re also looking at creating a rail spur to the water port in the city to increase cargo activity at the airport and create jobs.

“We’re doing a feasibility study for a microgrid that would give us the power we need in a sustainable way, and we’re looking at partnering with a vertical take-off and landing aircraft operator that flies air taxi drones, and integrating a vertiport with the airport.

“I think people still have this Wild West perception of Brownsville, but it’s not. We’ve caught up to the rest of the world and in some cases, we’re leading the way.”

• American Airlines and United are the only two airlines that currently operate flights to and from BRO.
• BRO has mainly been a business airport since its inception, but it is attracting an increasing number of leisure travelers.
• Popular resort town South Padre Island is located a short 25 miles from BRO.
• Stretching out over 31 acres, the renowned Gladys Porter Zoo is five miles from BRO. 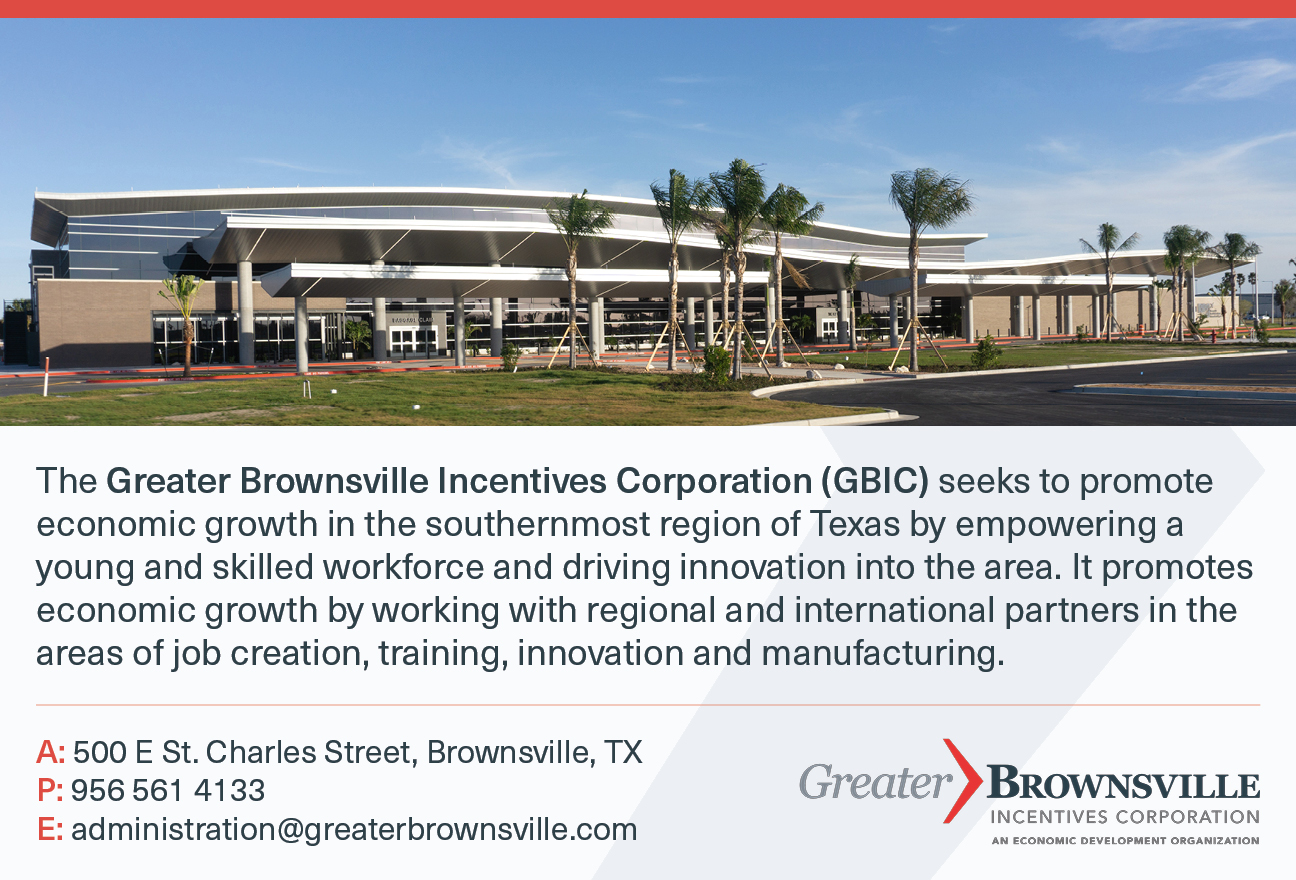 “Airports provide the ability to connect relatively easily between cities, allowing companies to diversify operations and transform economies. BRO provides Brownsville with the support necessary to position its assets in a way that makes them vital economic drivers in service of the community.” – Constanza Miner, EDFP, Interim Executive Director and CEO, GBIC