Rather than view Bharat Stage emission standards as simply another hurdle, Piaggio’s Diego Graffi saw it as a window to grab the competitive edge.

Rather than view Bharat Stage emission standards as simply another hurdle, Piaggio’s Diego Graffi saw it as a window to grab the competitive edge. 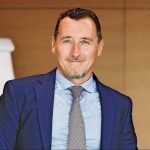 Since signing on to the Paris Agreement in 2015, reducing greenhouse gas emissions has been at the top of India’s agenda. The emerging electric vehicle industry is something that is luring more Indian auto companies into the space in hopes of capitalising on the trend. In turn, auto customers’ needs and behaviour are also rapidly changing.

However, Diego Graffi sees two major barriers to the spread of electric vehicles among the Indian population, which stands at around 1.35 billion. The Piaggio Vehicles India CEO and Managing Director first cite the cost of electric power is still much higher than other energy sources. And he also believes the cost of batteries when applied to three- and two-wheeler vehicles is still not competitive enough. Preparing for the future

One solution already being applied in China is a power packaging deal, where there is a trend towards localising the production of powertrain components and packages for electric mobility. China is currently home to BYD, the biggest battery and electric vehicle maker in the world. Its factory near Shenzhen is more than eight times the size of Tesla’s factory in the Nevada desert.

“Over the next 18–24 months, we will start seeing big improvements in India that will render these kinds of technologies more viable for the customer compared with conventional powertrain applications,” says Diego.

One such change definitely kicking this trend into motion is the Bharat Stage VI (BS6) standards, coming into effect in the near future, something Diego hopes will improve electric power’s cost competitiveness.

The second challenge for electric vehicles in India revolves around having the related infrastructure in place. If it is to truly become the norm, then recharging stations need to be built across all of India’s major cities like Delhi, Bangalore and Mumbai. Diego sees many service stations moving in this direction. “If these two barriers are brought down, then we hope, in the next two or three years, electric vehicles will become more common on Indian roads.”

“We hope, in the next two or three years, electric vehicles will become more common on Indian roads.”

Piaggio also interpreted India’s energy compliance measures as a call to improve the performance of power plants that its commercial vehicles will depend on in the future. “Obviously, the changes are very helpful for the environment, but they are also a benefit for us and our customers. This is because we can now provide not only cleaner vehicles, but also more in terms of performance and fuel efficiency. It’s much better than what the scenario was for BS3,” Diego says.

“I think we are state-of-the-art in terms of performance and total cost of ownership in comparison with customer spend. We are very independent with the kind of fuel we use, and we are a leader in the use of diesel. Now we are developing internal fuel as well.”

Diego has found his role at Piaggio a very fast and challenging one, since taking it on in June 2017. Competition in the three-wheeler market is tougher than ever, with Indian giant Bajaj Auto pushing for greater market share. Piaggio has also had to make a lot of adjustments to its commercial vehicle business since the Goods and Services Tax came into effect in July last year.

In the long-term, Diego believes the GST will be a positive for not only Piaggio but also for the Indian people. “It will be much clearer in terms of tax compliance for the company as well as benefit the customers because there is clarity on tax applied on finished goods,” he says. “I believe more of these long-term initiatives will have plenty of benefits for customers as well as companies, especially those in the auto industry.”

Piaggio has reacted well to this new dynamic scenario, with record production in the two-wheeler market for its Vespa.

Not one to back away from a challenge, Diego is completely engaged in propping up the commercial vehicle and the two-wheeler market, launching a new dealer partnership, developing new products and increasing production.

“There have been many changes, but we need to make them because more will be required over the next two to three years in order to maintain our growth. The period leading up to 2020 will be crucial for Piaggio Vehicles in India.”

India has been at BS IV nationwide since April 2017. It will skip Stage V, and move straight to Stage VI, with all regions compliant by April 2020. Some of the changes include:

Many of Diego’s formative years have been spent in the automotive space. After graduating with a degree in mechanical engineering from the University of Padova, he honed his craft at Fiat, which he says was a positive experience that helped him to understand the importance of focus and commitment on a day-to-day basis. That includes empowering his team through a clear statement of objectives and a proper appraisal of company results, as well as concrete decisions around purchasing and procurement.

“That has been my driving philosophy so far; trying to always make solid decisions, be positive and ambitious for the future,” says Diego. “The possibility for growth here in India is enormous because it’s such a huge market. It’s up to us to seize the opportunity to increase our revenues and the number of happy customers.”

On top of customer satisfaction, developing young people is something Diego hopes to base his legacy on. Hiring more young engineers is an obvious priority for Piaggio, but that’s not all it is looking for.

“Whether it be sales or R&D, we want to see more young people working in Piaggio who will want to stay and develop for the long haul. We feel that employee satisfaction will be a major factor underpinning our success.”

“We want to see more young people working in Piaggio who will want to stay and develop for the long haul.”

Diego constantly refers back to the customer, citing the customer as the driver of his day-to-day decision making. Because for him, happy customers mean more business for Piaggio, not only in terms of revenue but also in terms of the brand and image of the company in the local market.