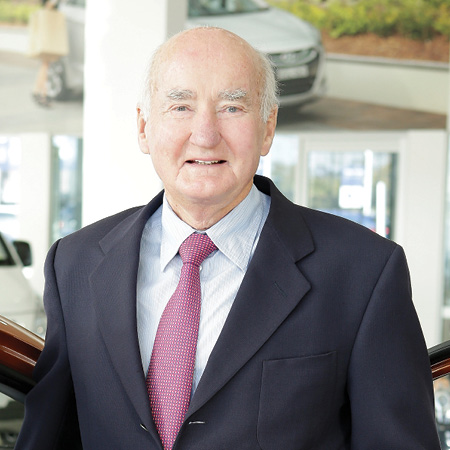 When I left school I couldn’t get a job that I particularly liked,” says John Hughes, CEO of the John Hughes Group. “I was going to be an assistant accountant but nobody offered me a job. I ended up getting a job in Canberra as a personnel cadet in the Department of External Territories. I had never been out of Perth before and I hated Canberra.”

John stuck with this job for some time, also studying English and Political Science part time at university, before heading back to Perth. “I saw a job advertised for a clerk at Atwood Motors, Stirling Street, Perth,” says John. “Atwood Motors was a car dealership and I got a job there as a clerk in the panel shop. A few years later I was the General Manager of its used vehicle operations.”

The beginning of a long love affair with cars

It was the start of a long career in automotive dealership that has made John Hughes one of the most respected dealers in Australia. Soon after landing the job at Atwood Motors, John was offered a position elsewhere, but the dealership made him a better offer to become a sales cadet. “I used to go into the used-car manager’s showroom at lunch and sit in the Vanguards, Trumps and Fords and I loved it,” he says. “That’s when I got my passion for cars.” After working there for several years, John felt a very strong calling to start his own automotive dealership operation. “At that time I would wake up in the morning with a knot in my gut at three o’clock in the morning,” he says. “I had all the tests and there was nothing wrong.” 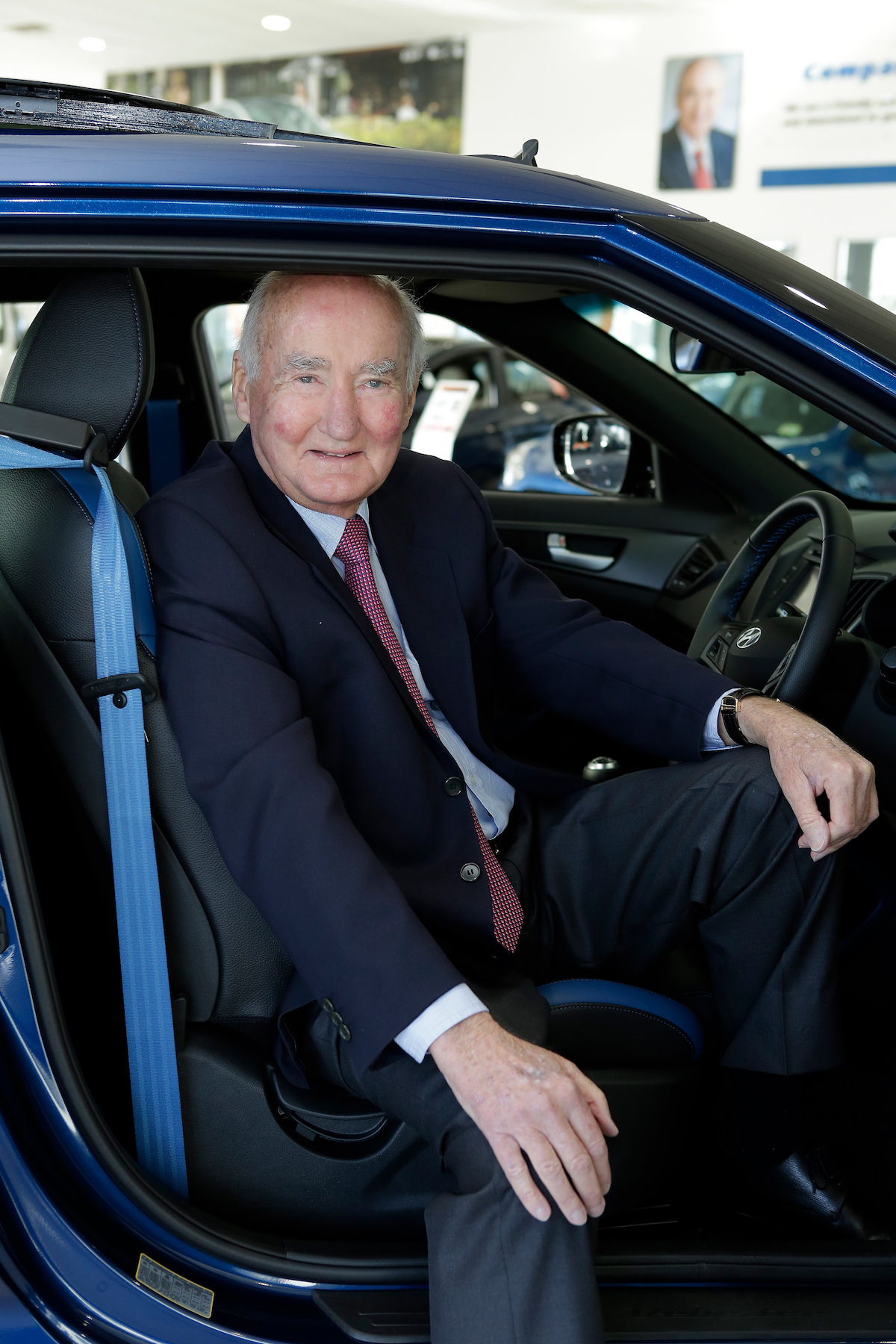 The relationship between the John Hughes Group and Hyundai is an important one to both John and the car manufacturer. His award shows his value to Hyundai, on top of the fact that John has not only been the biggest-selling Hyundai dealer in Australia — along with business partner Alan Bond, he helped to bring the first Hyundai cars to Australia in 1986.

That was when he saw the upcoming auction of a service station site. It sparked an idea in his mind but, due to his recent wedding and being low on savings, he didn’t attend the sale. The next day, after another night of feeling that familiar knot in his stomach, he called the selling agent hoping the site hadn’t gone at auction. It hadn’t.

‘The minute I made that decision, that knot in my gut went away’

“I rang them up the next day and I made an offer that I thought they couldn’t possibly accept,” he says. “I slept well that night. The next morning they rang and told me it was mine. I had to walk up and down the main financial street in Perth and borrowed 125% of the capital I needed, but the minute I made that decision, that knot in my gut went away. I wasn’t destined to work for other people, and that purchase was the start of it.”

These days the John Hughes Group has 550 staff and an annual turnover of $600 million, selling over 10,000 used cars every year. In a remarkable achievement, John Hughes Hyundai was the biggest-selling Hyundai dealer in the world for nine consecutive years.

“I have raised the image generally of the whole car industry in Western Australia by my example,” says John. “It sounds as though I’m sounding off, but it is the truth. I put customer service above all else and I have been here in the business for sixty years — forty-seven years in the same location. What gives me the greatest source of satisfaction is people buying cars from me and walking away, driving away with a smile on their face. That’s important.”

The relationship between the John Hughes Group and Hyundai is an important one to both John and the car manufacturer. His award shows his value to Hyundai, on top of the fact that John has not only been the biggest-selling Hyundai dealer in Australia — along with business partner Alan Bond, he helped to bring the first Hyundai cars to Australia in 1986. John Hughes Hyundai in Perth sold the very first Hyundai in Australia in 1986, as well as the millionth Hyundai from the same dealership in July of 2012.

The dealer–supplier relationship is a particularly important one — one can’t exist without the other in the automotive sales business. 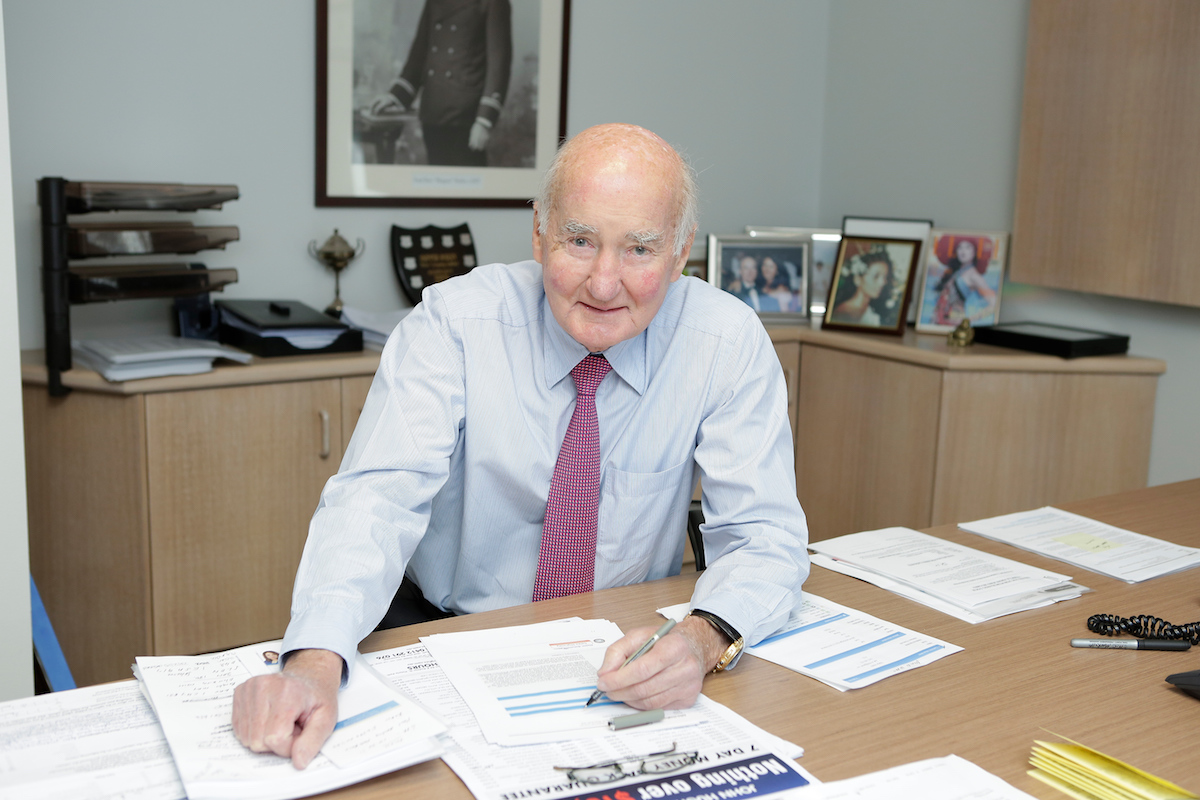 “We all make mistakes as we get older, but you should never make the same mistake twice.” - John Hughes

“It is important that we work together to try to get the maximum result in terms of customer satisfaction,” says John. “It all comes back to teamwork — we have to cooperate, make sure the supply chain is constant, and work together when it comes to warranty problems — for our customers.”

It hasn’t all been smooth roads for John throughout his career; quick expansion with too little control meant the Group nearly went under in the early 70s. “I recovered and I am now where I am today,” he says. “We all make mistakes as we get older, but you should never make the same mistake twice.”

There have been other challenges along the road as well, including one that he’s grappling with today: IT, social media, websites and cutting through to a younger customer base.

“People under forty don’t read newspapers any more, and we have to make sure we’re staying up to date,” he says. “This isn’t my strong point, so I have to make sure I have people working with me who are good in that area that will drag me screaming into the twenty-first century. I don’t even have a computer.”

It’s by combining his knowledge of his own strengths and weaknesses and being passionate in the workplace that has earned John his success. That, and working hard. “It’s focus, passion and discipline that have brought me success,” he says. 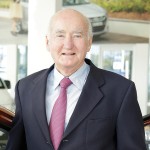