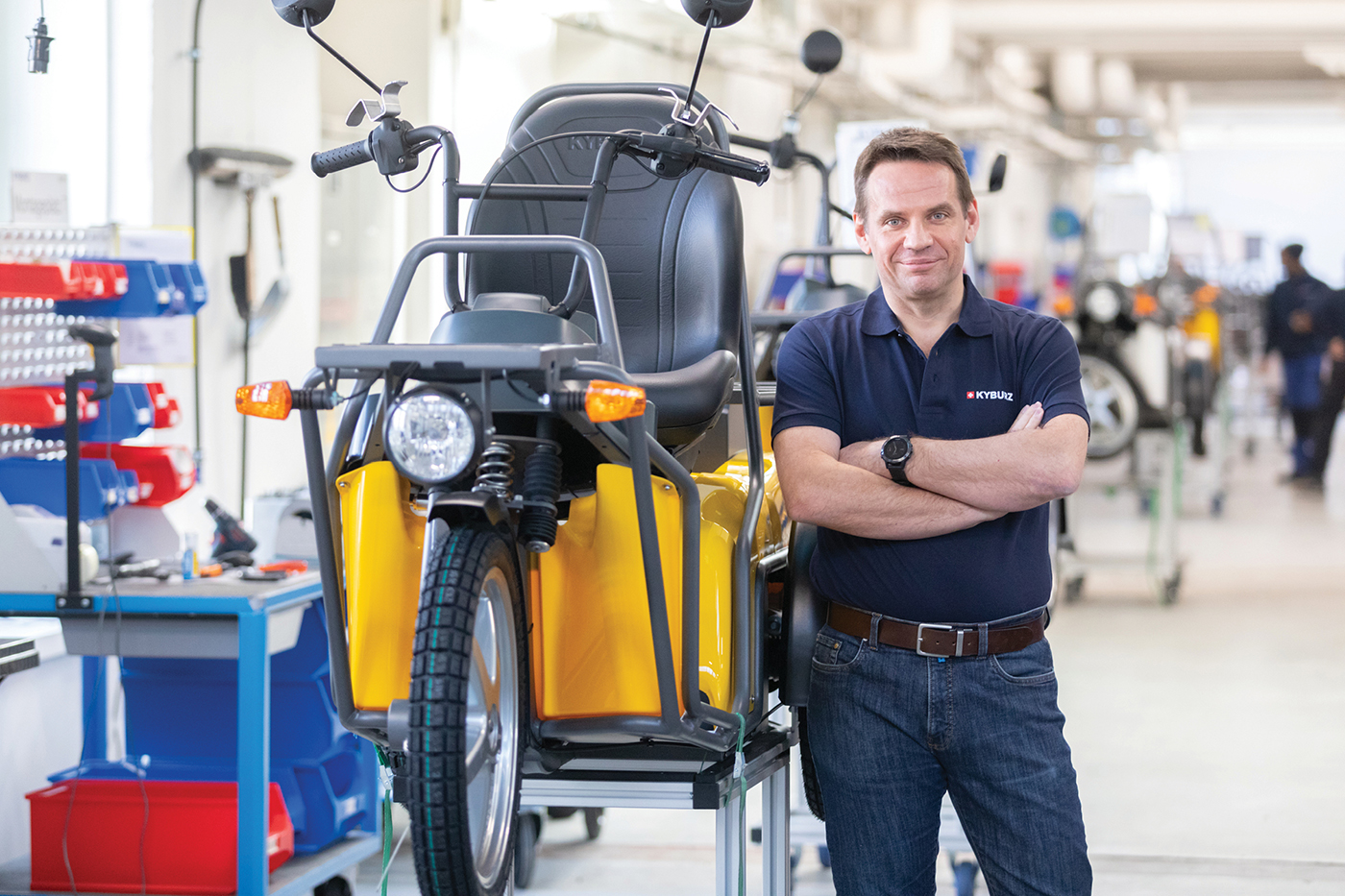 Martin Kyburz openly admits that he knows nothing about business, “nor is it a subject I am interested in”, he says. As the Founder and CEO of the eponymous KYBURZ Switzerland, he’s had to learn the ropes, although it’s obvious he’d prefer to allocate the time spent on the operational and management side of the business to developing new prototypes of his electric mobility solutions.

“I’m an inventor, not a manager,” he insists. “My mission is to invent things that help people.” Something else the trained electrical engineer doesn’t have much time for is mechanical engines.

“I’ve always seen the potential of electrical engines,” he shares. It was this belief that KYBURZ would grow out of in 1991. His first vehicle was a two-seater, with top speeds of 130 kilometres per hour and a range of 150 kilometres.

“From a technical point of view, it was quite good, but from a business point of view, it was unsustainable because it took me 1,500 hours to build.” For the first 10 years, Martin grew the company around what he calls an “easy” mobility solution: vehicles for the elderly. It’s still an important segment of his business today.

“We have many customers who rely on their vehicles to continue living in their houses in the countryside yet still be able to access their local village or town for groceries and so on,” he says. From there, it was a natural progression into other markets, namely postal services. It’s an area of business that is booming.

“Swiss Post replaced its entire fleet with our vehicles,” he explains. It’s a win–win situation for the national postal service. “The posties really like my product as it’s much more efficient and the management really likes it too, because it saves the organisation money. It’s also great for the environment.”

With the success story of Swiss Post, Australia, Finland, Norway, Slovenia, Hungary, Germany, Iceland, Belgium, the Netherlands and New Zealand are some of the other countries that have started to convert their postal delivery fleets to KYBURZ electric vehicles.

At one point last year, the company was shipping two sea freight containers a day to Australia to fulfil Australia Post’s orders of more than 3,000 vehicles up to now. Martin has been the sole owner of KYBURZ since day one.

“Everything I earn, I put back in and we do new projects,” he reveals. By maintaining a manageable production output – in 2020, that was 3,500 vehicles – he doesn’t have to look for investors. This is why he has no plans to enter the market for electric cars or trucks either.

“I’m able to fund everything with my own money. To build a car, however, I would need €100 million. It would not be my money, so I would no longer be free in my decisions.”

Without anyone to answer to, Martin is able to control the direction of the business. Currently, his attention is focused on autonomous driving (although he has already sold technology for an autonomous delivery robot to The Norwegian Post, he says he is 5-10 years away from it becoming standard) and perfecting a new technique to recycle lithium-ion batteries. 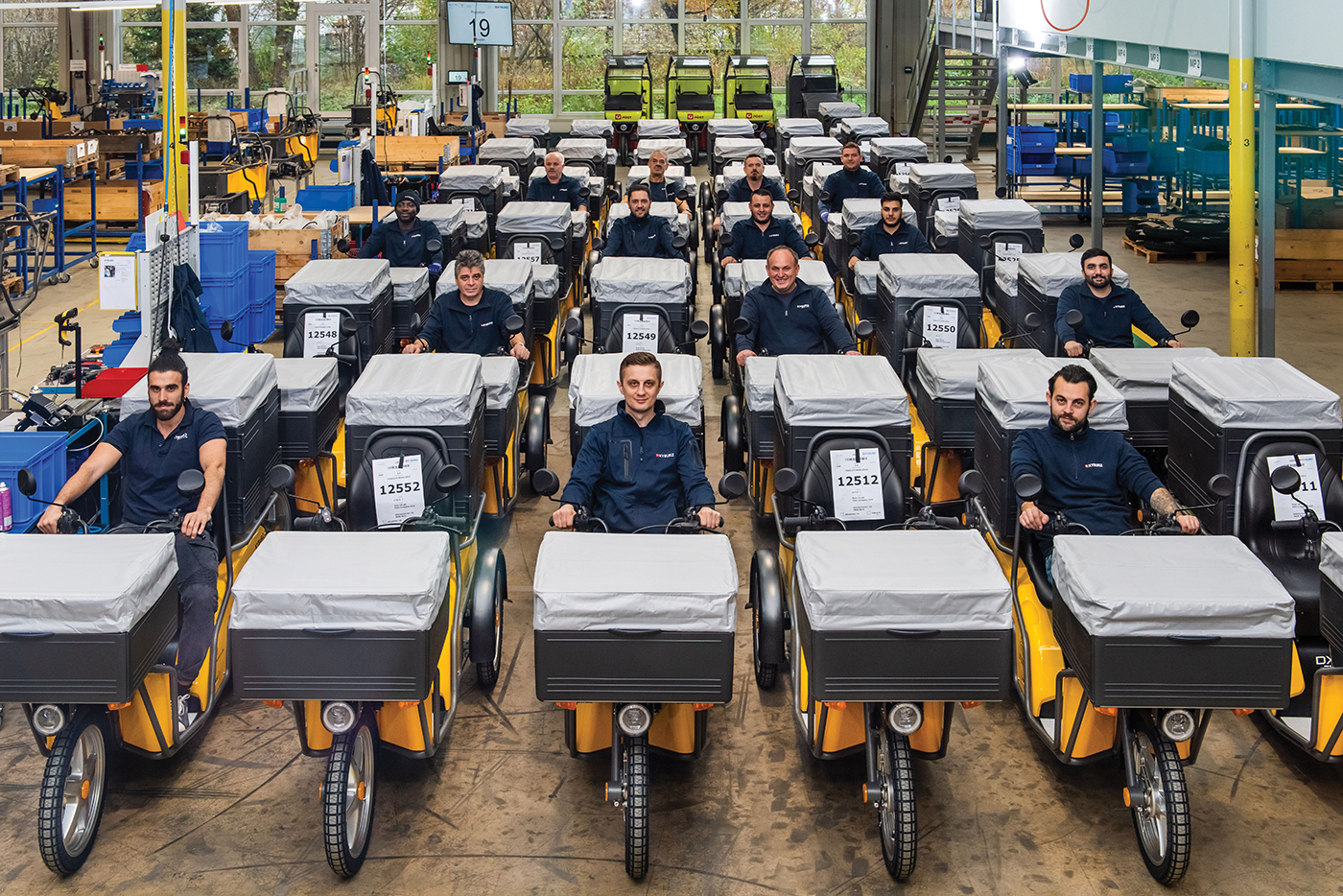 “We are able to reclaim more than 96% of the non-renewable material from the battery. No-one else has been able to do that up until now,” he boasts, adding that witnessing the system at work last year was one of his career milestones.

“It’s unbelievable how clean the material coming out of the battery is. Especially, when thinking that otherwise it would just be considered waste.”

Firm in the belief that the traditional concept of competition must be readjusted if we are to protect the environment, it’s a technology that Martin has deliberately refrained from patenting.

“The biggest issue in electric vehicles is the battery. If we can increase re-use, that will be a great win, so everybody’s free to copy it,” he points out. “The concept of competition is outdated and unsustainable. People shouldn’t keep anything for themselves.”

It’s the bigger sustainability picture that drives him to continue to innovate and invent. “Everything we do wrong, the next generation will have to solve,” he says. “I’d like to give them a helping hand.” 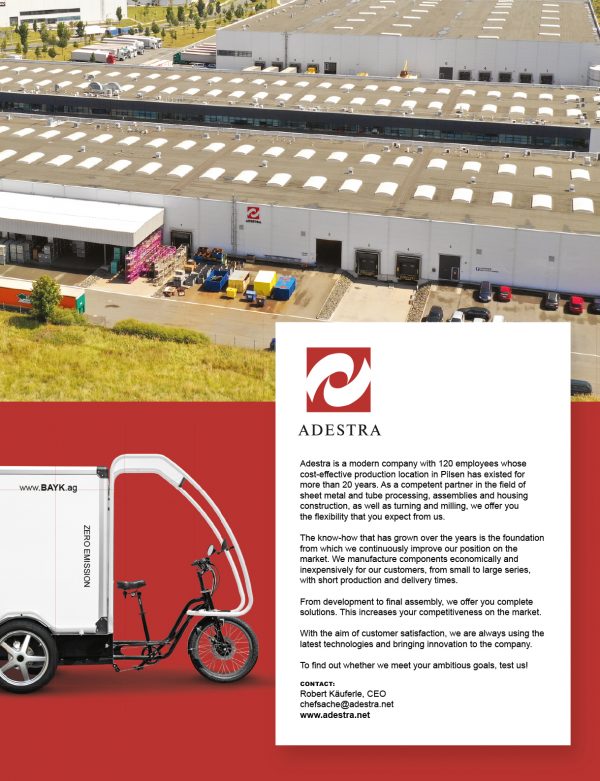