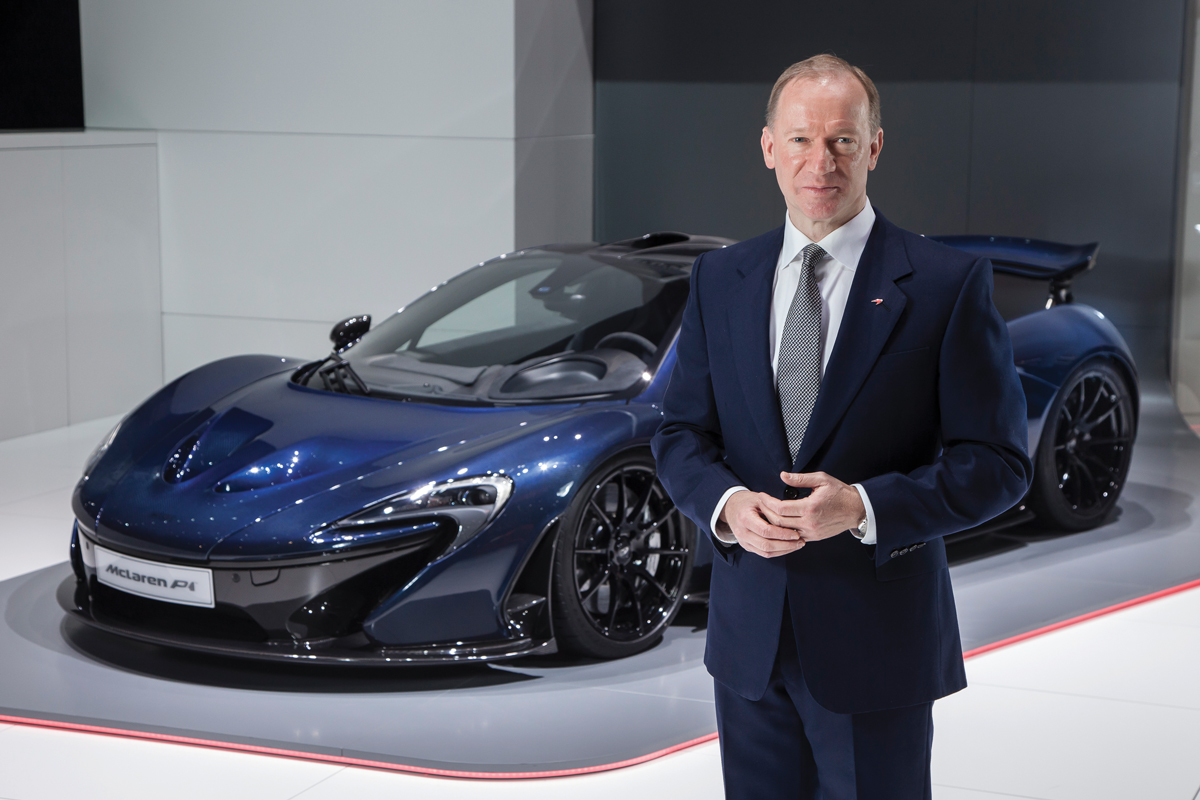 “McLaren is relentlessly striving to build the best car possible for drivers,” says Mike Flewitt, CEO of McLaren Automotive. “Our belief is that working with technology will enable us to do that; whether that’s in the software controls, the aerodynamics, the light-weight composite structures we use, or the configuration of our powertrain. We want people to find our cars more capable and more enjoyable — whether they’re driving on road or track.”

Mike joined McLaren Automotive in June 2012 as COO before moving into the CEO position in January the following year. The company had been a respected motorsports brand since 1963 and underwent a shift in focus in 2009, when shareholders created a separate road car company. When Mike joined the business, he brought with him a wealth of automotive experience at a time of growth for the company.

“I’ve spent most of my life in the automotive industry, 32 years now,” he says. “I’ve worked for Ford Motor Company on two occasions, once for 11 years and once for 10 years, I’ve worked for Volvo in Sweden, and for Rolls Royce and Bentley in the UK.”

Over his career he’s found that opportunities tend to pull him away from his home base in the UK, which has resulted in significant international experience, including stints in Germany and Turkey. However, McLaren Automotive was different.

“McLaren offered me a number of things, and one thing that really appealed to me was the ability to move back to the UK to be a part of a team that was a successful UK-based manufacturer,” says Mike.

At the time he joined the company, McLaren was also in a state of movement. This gave Mike the chance to really influence the future of the company and guide its development. Nobody needs a McLaren; we have to create the desire for a McLaren.

“That was such an exciting opportunity,” he says. “Prior to McLaren, a lot of my career had involved going into mature enterprises and helping to progress them, but only with the capacity to bring about lower levels of change. Coming to McLaren, I could be part of leading the structure, creating the vision and making that footprint in the sand.”

He’s certainly been able to make his mark. From the first business plan he completed back in 2013 through to 2015, McLaren Automotive has turned a profit and produced 1,650 cars per year.

“Then, 2016 was a turning point for the company,” says Mike. “A lot of the planning we had done, in addition to a lot of new model development and significant growth, meant that we started to realise some scale. We aspire to production volumes in the region of 4,000 to 5,000 cars per year.”

Developing new car models has been an integral part of the business. McLaren unveiled its “entry level” vehicle in 2015 — the 540C, starting from £130,000. There’s also the Super Series 650S and 675, and Ultimate Series cars with the P1 and P1GTR. This year, the company is on track to manufacture more than 3,000 cars. Manufacturing cars from excitement and desire

“How we develop this brand in a meaningful way pivots around our products,” says Mike. “We do a lot of work to understand what will excite our customers, and what creates the desire to indulge in buying a luxury product.

“A McLaren is a luxury product, and the ultimate expression of luxury is the degree of personalisation that we offer,” says Mike. “McLaren Special Operations allows customers to individualise their car to represent themselves, especially when it comes to aesthetic design – paint patterns, seat trim and other customisations.”

There are two things that really set McLaren aside from its competitors, says Mike. Firstly, it’s the company’s drive to always be better, to be a step ahead of regulation, and to use new developments to create better cars. The second thing is McLaren’s thorough understanding of what delights its customers.

The complexities of global demand

“It’s a complex world we live in,” says Mike. “And demand is truly global. It isn’t just Western European or North American demand — more than a third of our sales are in Asia, including China, and we sell a lot of cars into the Middle East.”

For this reason, Mike spends a large amount of his time going out and meeting dealers and customers; last year he spent half of his weekends at customer events.

“That means I’m getting to know and understand the customers and their needs and wants,” he says. “If you understand their taste, you can design cars that align with what’s going to excite them; that’s really key.”

This endless pursuit of what makes McLaren customers happy is what fulfils Mike in his position as CEO. However, it’s only part of what makes his work pay off for him, the other part being his innate love of cars.

“I am an absolute car enthusiast at heart so this is partly work, partly pleasure for me,” he says. “I’m in an environment that I enjoy. Though I never lose sight of the fact that this is a business that I’m trying to drive to success.” 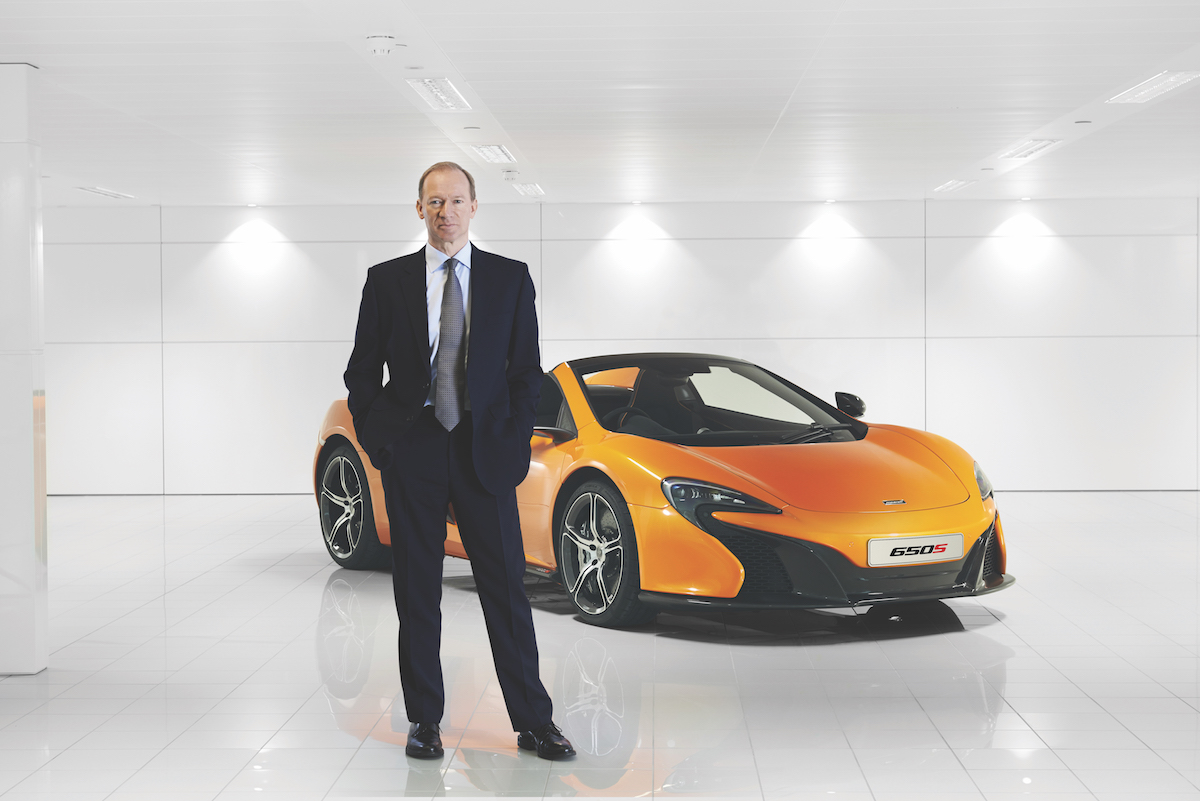 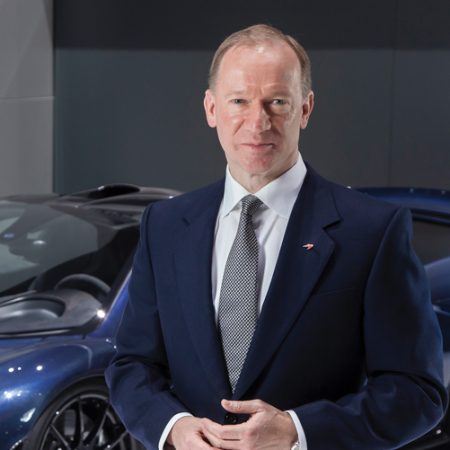