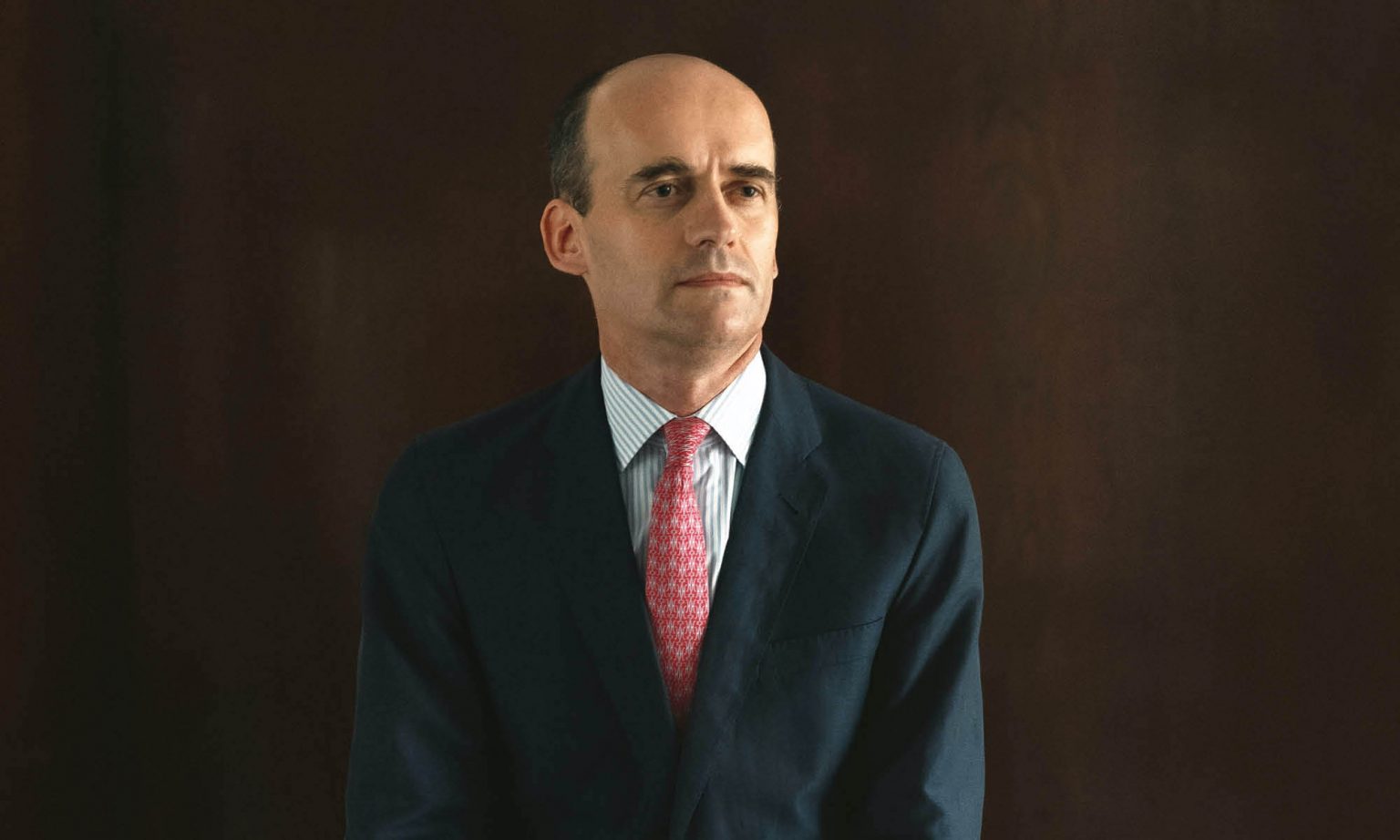 Casting a glance at the statistics might give the impression that Thailand fared better than most when it came to COVID-19. Tough lockdowns and travel restrictions meant there were fewer than 7,000 cases throughout 2020 and only 61 deaths in a country of nearly 70 million. Even after a major outbreak linked to Bangkok nightclubs and a boxing match in April this year, in which more than 70,000 people were infected, put the country below international averages with 15.31 total deaths per million at the beginning of June. In comparison, Sri Lanka had 69.3 deaths per million, Pakistan 94.75, the UK 1,886 and Hungary a shocking 3,077. 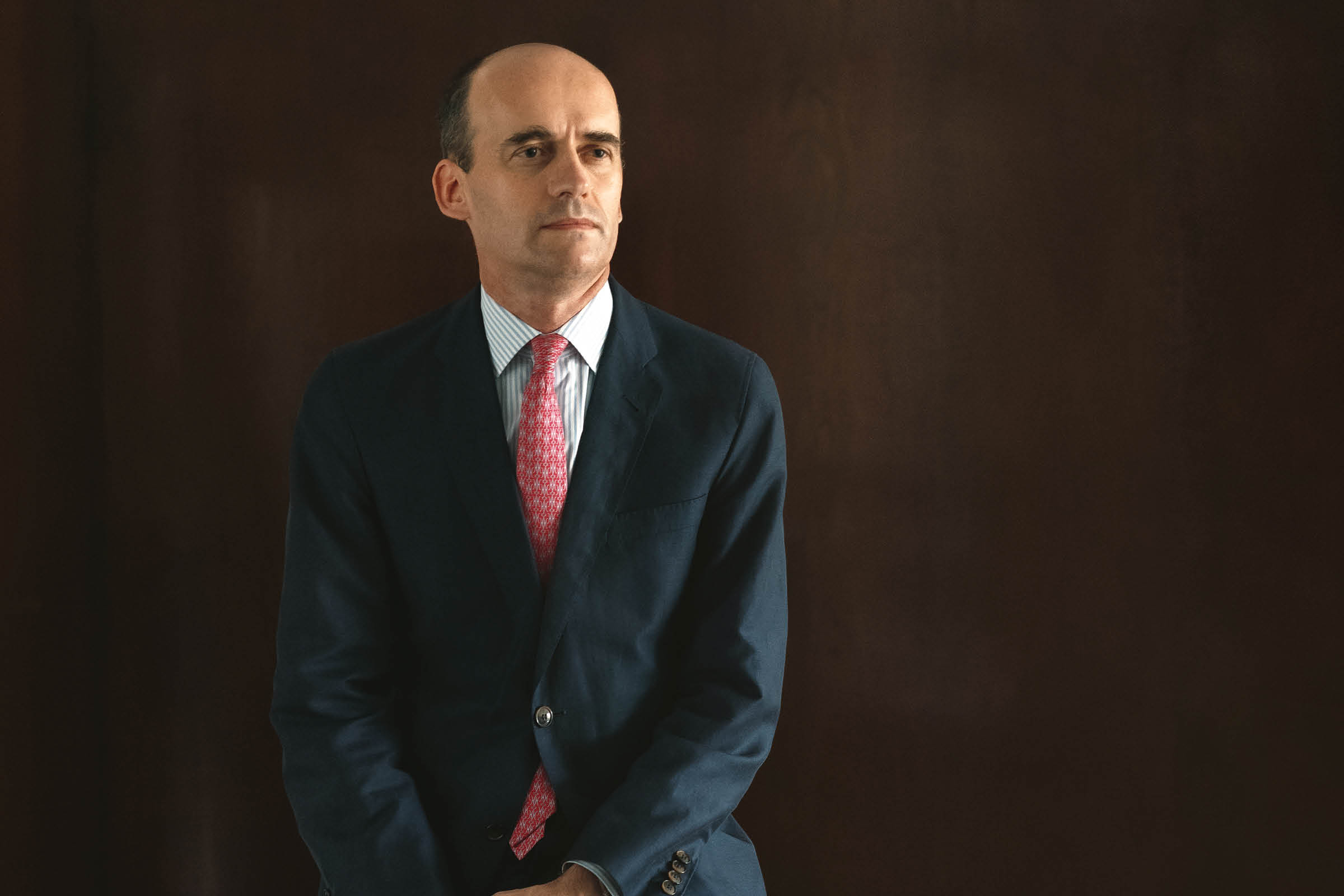 However, the Thai economy, which is the second largest in South-East Asia, was hit much more severely than surrounding countries, with the World Bank predicting an 8.9 per cent annual contraction in September 2020. Tourism, which accounts for a fifth of gross domestic product, declined by two thirds and remains moribund. The Asia Development Bank forecast GDP growth in Vietnam, India, Indonesia, Malaysia and Singapore, but a 4.8 per cent decline in Thailand.

“The economy slowed down significantly during the first COVID-19 wave in March and April last year,” says Patrice Bard, Managing Director of construction giant Bouygues-Thai. “A big part of that was because we had no tourists, and they are vital to the economy. It certainly hit the construction sector, but in truth we had noticed that it had begun to decline towards the end of 2019, especially the residential markets.”

“We all believe that we have to take care of our workers and change their lives for the better as they’re one of the most important things we have.”

The company is part of the Paris-headquartered Bouygues Construction empire that has 58,000 employees in more than 60 countries and generated sales of US$14.6 billion in 2020. Its Thai operation has been going for 31 years and is responsible for several major towers including the Emporio Place (44 storeys), North Point Pattaya (54), The Met (66), The River (71) and MahaNakhon (77), the country’s tallest building when it opened in 2016 and a multiple award winner for its design.

As the pandemic wreaked havoc last year, Bouygues-Thai adapted more quickly than most. “We had to urgently reorganise in terms of cost base and corporate structure,” Patrice remembers. “We took a long, hard look at how we were spending money and whether there were ways we could be more efficient.

“I also had to look at how we could continue to operate our sites in Bangkok in an almost normal manner through social distancing, temperature checks and verification procedures within the camps. We already had very strict safety checks in place, but this was about the health of our people.”

Patrice acknowledges that the company was forced to make some tricky decisions. “We had to admit to ourselves that because there was such an unprecedented crisis hitting us, it was going to be difficult,” he says. 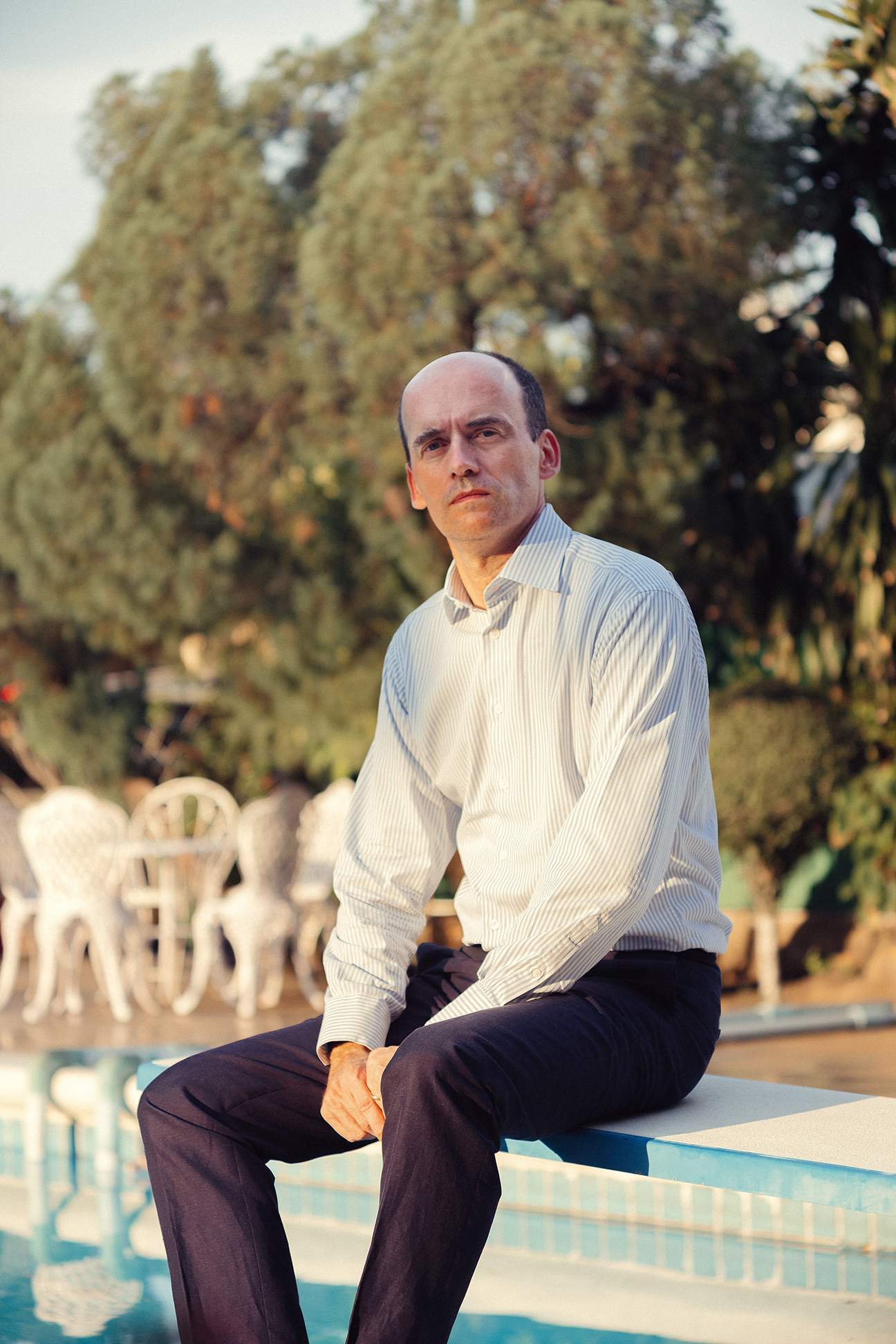 “It certainly helped that I had been leading a ‘lean committee’ for more than two years where everyone was coming up with ideas on tighter ways to work in the supporting departments like IT, accounting, administration and personnel. So we were already taking steps towards finding innovative ways to be more efficient.”

One of the biggest challenges was importing enough equipment for the projects that were proceeding. “It’s been a bumpy road in terms of logistics, containers, ships, customs and so on,” Patrice says. “We had to be prepared and always make sure we had a spare wheel somewhere; otherwise we’d be facing crisis management every day, and that’s no way to run a company. At times like that, you have to instil confidence in those around you or things will go wrong very quickly.”

Having successfully kept the COVID-19 infection rate close to zero for several months, an outbreak in December caused renewed economic uncertainty until it was brought under control. “By February and March this year, we could tell the economy was in restart mode,” Patrice says.

“Construction has evolved very slowly for the past 30 years in terms of innovation.”

“We could recognise that there were positives for us in the way we have reacted and achieved cost efficiencies. That wasn’t something we were actively looking at two years ago.”

Patrice, who first joined the company in 1996 as an engineer, wants to form meaningful, long-term relationships that are about more than just putting up skyscrapers. “It’s important we give our clients a full package and be there with them from the very beginning, where maybe they just have a blank sheet of paper,” he says. “We help with design, materials used, how it will be maintained and ways to use green technology.

“And it shouldn’t be about just one project; we want to show them they can trust us for the next one and the one after that. We prefer to maintain strong relationships with a small group of clients rather than having a very large group where we can’t connect with them as deeply. We’re a very special kind of company, a local firm with an international mindset delivering a very high standard.”

This is a major element of the Bouygues-Thai culture, which has formed over many years and comes directly from the top. “The person heading the organisation is the son of the founder so we’re a family business with strong roots. We all believe that we have to take care of our workers and change their lives for the better as they’re one of the most important things we have,” Patrice says. “For example, they need to finish work at a reasonable time so they have time to relax.”

To that end, the workplace priorities at Bouygues-Thai are about self-improvement and looking for clever, new ways to solve every problem. “We all have to continue to train. Everyone, myself included, is learning every day so we can evolve and progress,” Patrice notes. 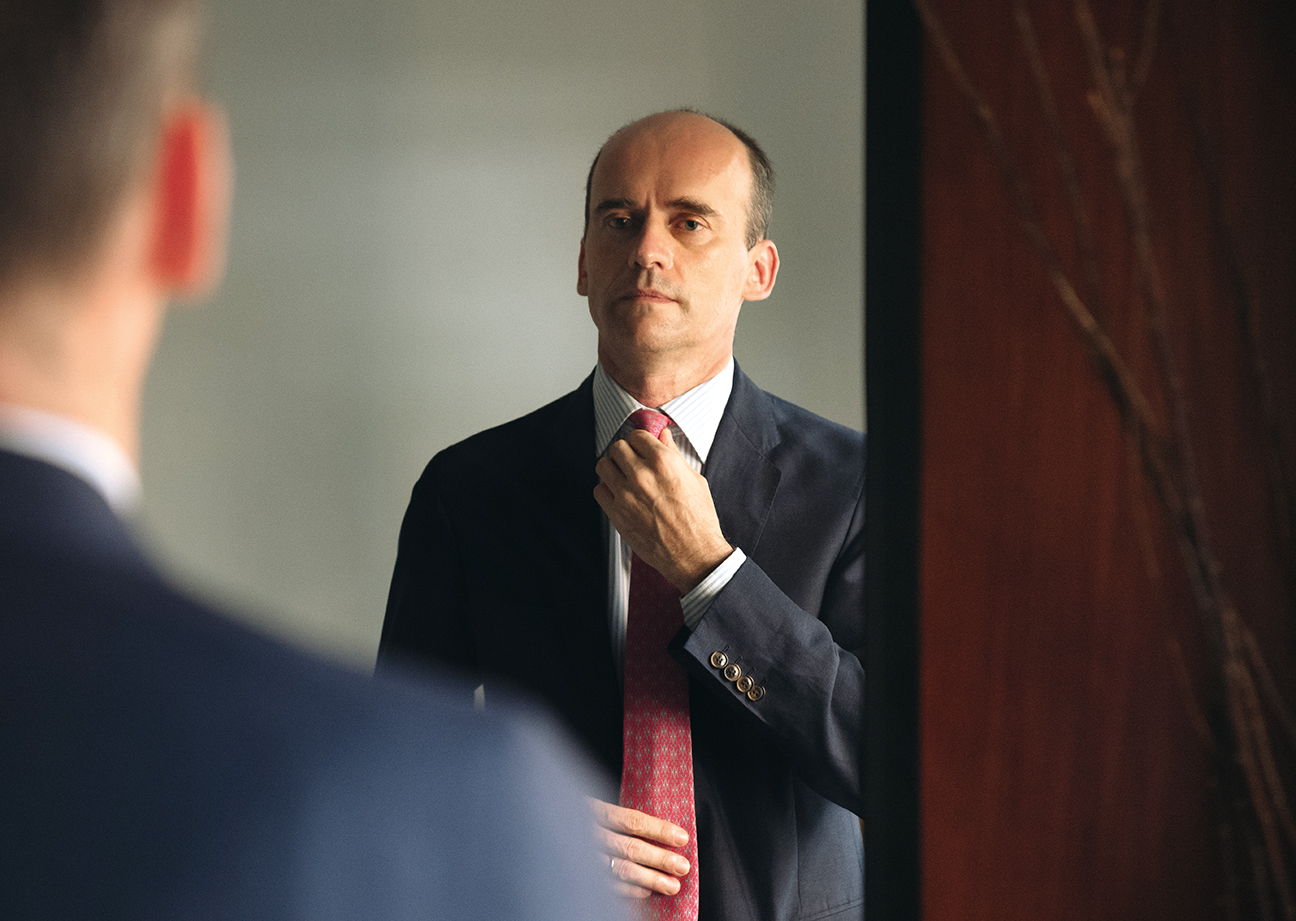 “Construction has evolved very slowly for the past 30 years in terms of innovation, so to be different from our competitors, we have to build faster and be better. The new concepts we’ve adopted are already saving us time, and time really is of the essence because clients are demanding quick construction.”

Another priority is reducing greenhouse emissions. Globally, Bouygues has committed to reducing its carbon footprint by 30 per cent by 2030. As the building industry is a major energy user, it’s ambitious, but Patrice is confident it can be done. “Of course, the main thing is the concrete itself, as it takes a lot of fuel to produce it, but we will find ways that will help the environment,” he says.

For now, the country faces an uphill climb to recover from a traumatic 18 months, but Patrice has confidence for the future. “Thailand has been through many different types of crises in the past 60 years, but it has always found a way to bounce back,” he says. “It’s suffering right now and in a difficult situation, but I’m sure the economy will come back strongly. There is such potential, so I’m optimistic.” 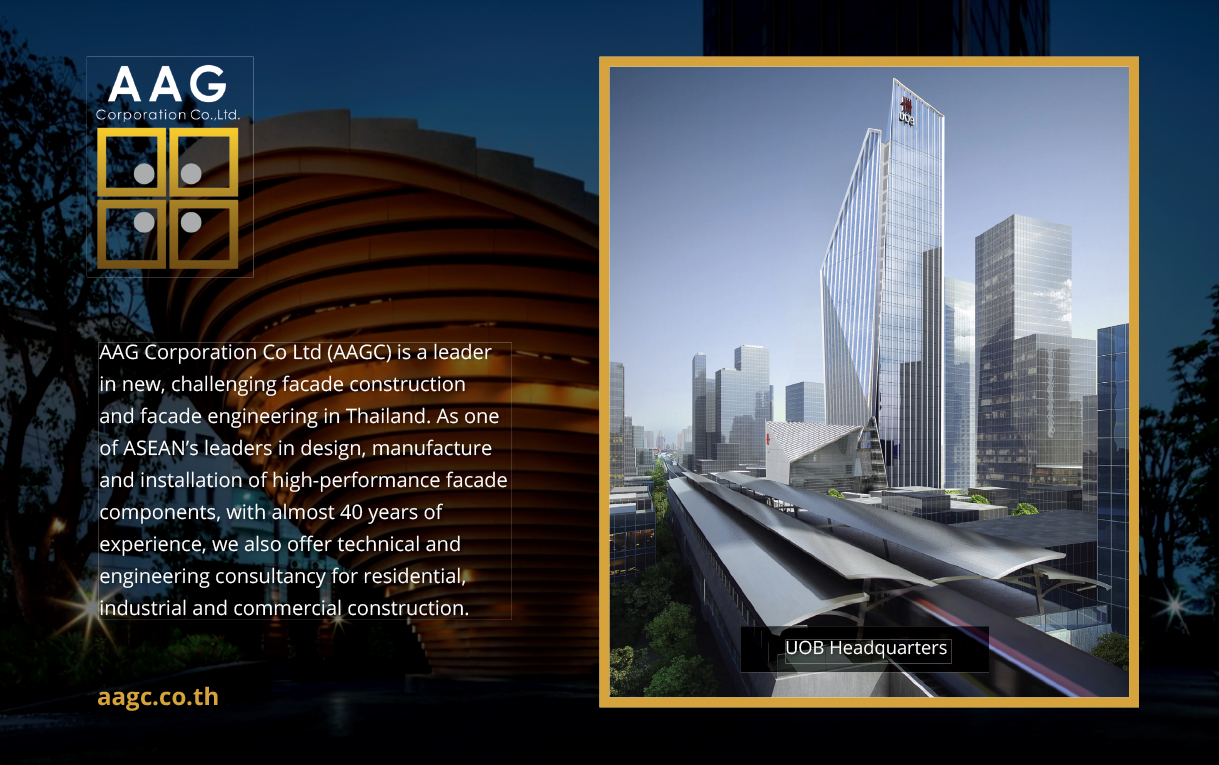 “Bouygues-Thai has proven to be a professional partner committed to executing their client’s vision. It has been a rewarding experience working with BouyguesThai all these years and AAGC looks forward to working with them in the years yet to come” – Bunjerd Lertkiatdamrong, Managing Director, AAGC 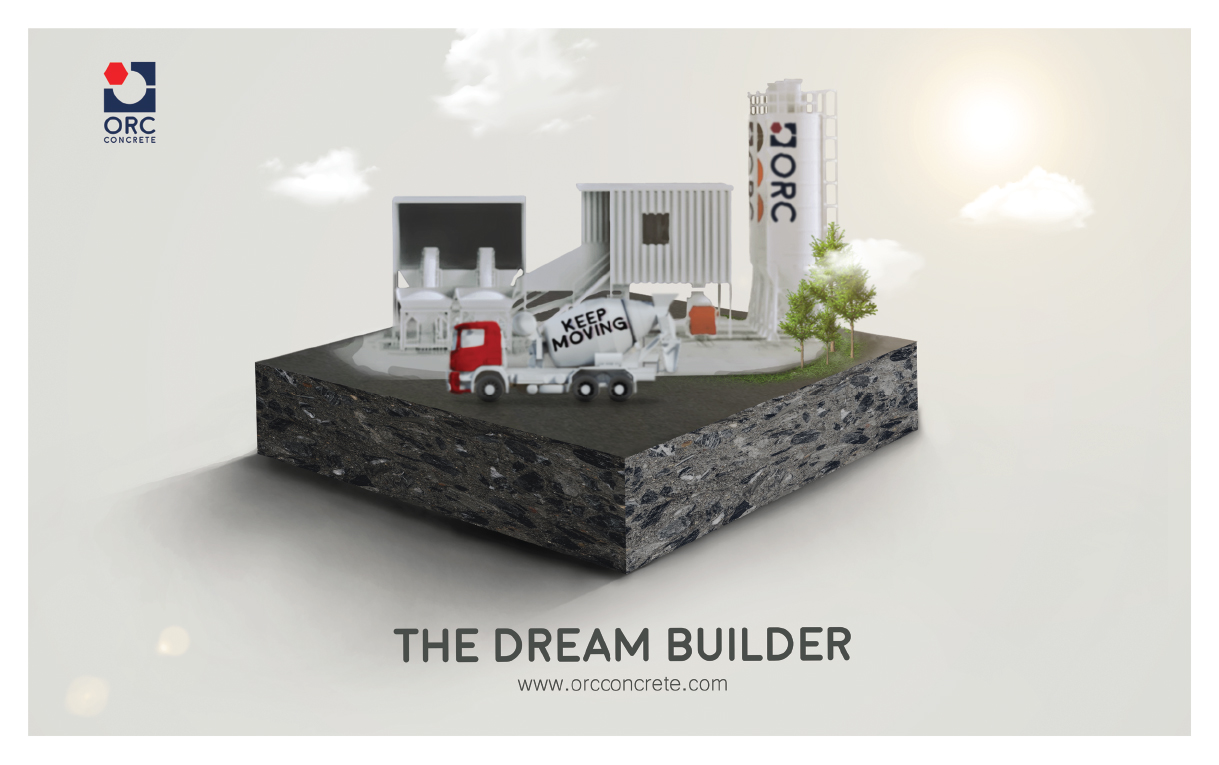 “Having over 10 years of experience as a partner of Bouygues-Thai for ready-mixed concrete, we are impressed with its expertise to achieve excellence in every project delivered. Bouygues-Thai is clearly making a positive difference to Thailand’s construction industry.” – Arada Suwanpraipatana, Managing Director, ORC Premier Company Limited 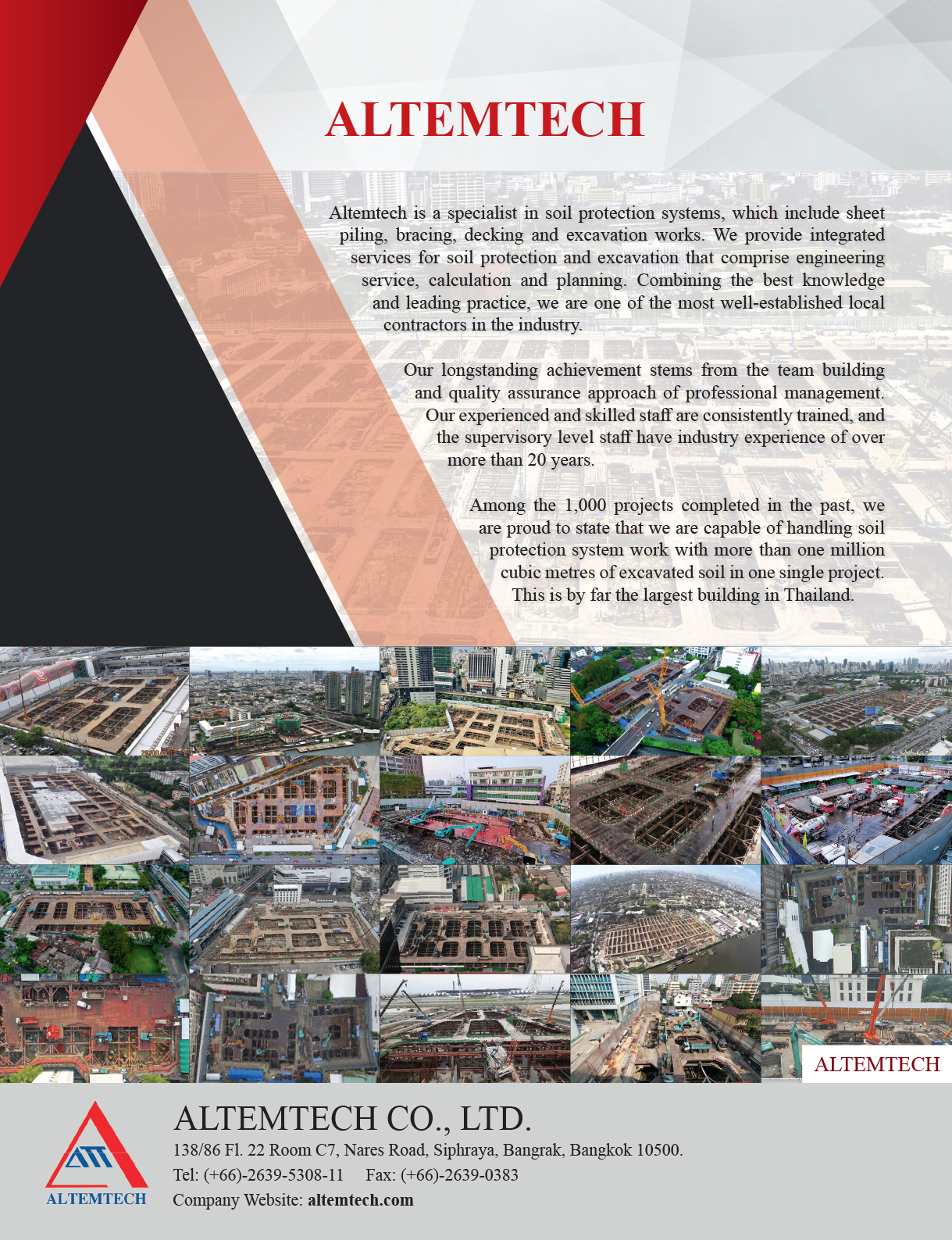 “We are pleased to have been a trusted partner with Bouygues-Thai for over 15 years. With Bouygues-Thai’s support and unwavering global quality and safety standards, we can collaborate with local expertise to conduct proper planning, use the latest technology and train staff in completing megaprojects together.” – Visanu Vivatanaprasert, CEO, Altemtech Company Limited 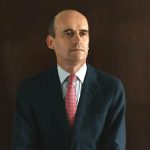