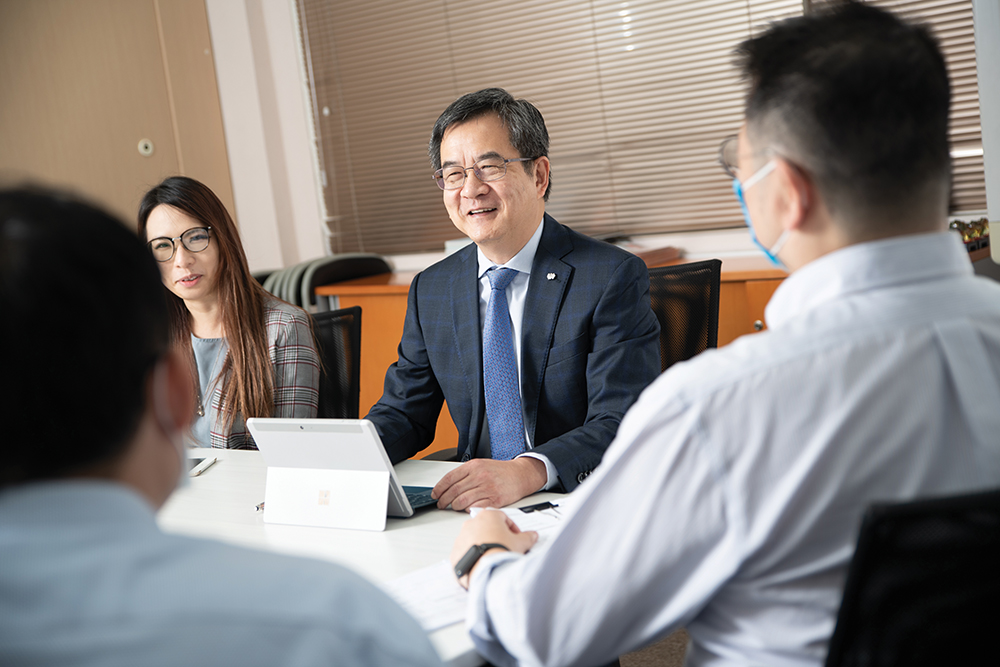 When the Asian financial crisis devastated economies across the continent, Stephen Lee found himself working to recover debts and maintain revenue at his current construction business. Many other employees had left at the time, but he had stayed to ensure a smooth handover. It may have been this dedication to good management that caught the eye of Chun Wo Development Holdings’ Founder.

“At that time, I was introduced by a friend to the late Founder of Chun Wo, Dr Pang Kam Chun. He wanted me to join even though I couldn’t start there for another six months,” Stephen recalls. “That inspired me because there weren’t many people who would give me opportunities like that. He gave me six months and I joined after that. Then I left Chun Wo, to pursue something else I wanted to explore.

“I rejoined in 2011. The present CEO of the Group, Derrick Pang, personally invited me for lunch and asked me to join. Again, I couldn’t rejoin immediately as I was still working with another company. But I promised him when I finished that job, then I would join, and he agreed, although it wouldn’t be for a year. That sincerity inspired me. And so, I rejoined.”

Today the CEO of Chun Wo’s construction business, Stephen has spent most of his 40-year career in construction, starting as a quantity surveying consultant before joining the government for a short stint. He then moved on to private industry contractors and developers. Stephen finds contractors much more challenging than other organisations, but it’s the reason he’s spent most of his career with such groups.

For Stephen, the most challenging aspect of his work is people management. Besides answering queries and addressing issues for Chun Wo employees, he also spends a lot of time with subcontractors, dealing with matters around payment, relationships with project managers, and so on. Client relationships are equally integral – he needs to manage client expectations and satisfy their requirements, which can often be strenuous. Challenging though this work is, it’s also critical to the company’s success.

“I treat people as the most important issue. That’s why I try to spend a lot of time talking to my colleagues,” Stephen says. “I’m not just talking about meetings. A meeting is for resolving issues or difficulties, but I don’t mind if colleagues come to see me personally. We can talk about the job, their career, and sometimes we even talk about their family, their own life. I think the most important thing is to let them know we have a focus on people, not just business.”

As CEO, he sets clear targets for each division of the company, for supervisors and managers – reaching these targets means a bonus, a means of motivation. Stephen is quick to note that Chun Wo Construction is maintaining this practice, even after several tough years for Hong Kong’s economy. During the pandemic, he had to freeze senior salaries, but maintained incremental raises for junior staff, who would find it harder to keep up with rising costs of living.

Stephen believes that management shouldn’t just be more effective or efficient, but also undertaken with a focus on the human side. His focus on pay rises and other measures taken during the pandemic reiterates this: employees who could work from home did so, while those who couldn’t were given leave; reduced or unusual work hours were implemented to minimise exposure; and personal protection equipment was given to employees.

The wellbeing and satisfaction of his team is a critical task, given the future opportunities the company is seeking to exploit. Stephen notes the government has announced huge infrastructure expenditure in the short-term and, given Chun Wo’s local expertise as well as investment into new technologies like modular integrated construction and rapid repairing mortar material, the construction firm is well placed to take on new contracts.

Indeed, Stephen takes the future of the company very seriously, especially when it comes to succession. “Every senior position – not just the CEO – of an organisation needs to have a good succession plan,” he insists. “I don’t think many Chinese companies are used to that, whereas Western businesses are more willing to do so.

“The first day you are appointed, you have to start to find your successor and groom them for that position. That’s a very important concept for the sustainability and continuity of a company.” Every senior position – not just the CEO – of an organisation needs to have a good succession plan.