Another Way at the Office: James Tsang 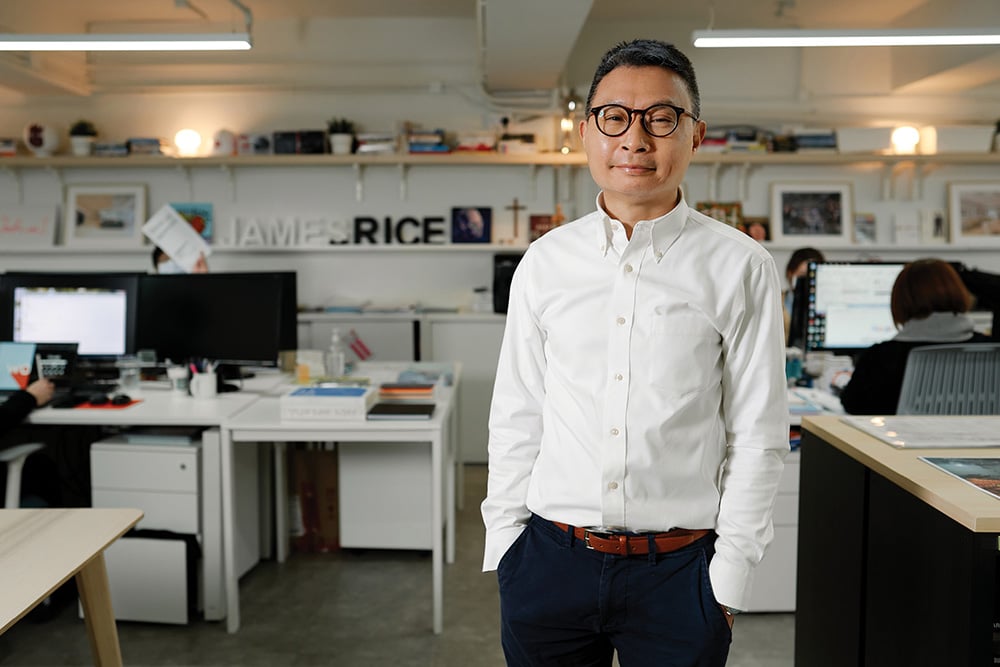 Asia’s contractors have found a champion in James Tsang. The Co-Founder and Director of James Rice Contracting is a passionate defender of the profession, which he strongly believes does not get the respect it deserves.

“How many contractors do you know? How many people describe themselves as contractors? It’s not saying you’re an architect, which has a sense of prestige around it. Even in the movies, you don’t see a lot of contractors as characters,” he points out.

“Before I die, I’ll do as much as I can to tell the world how important contractors are and how crucial their work is. A contractor manages so many different trades – joinery, painting, ceilings, electrical and more – to complete a great project. It’s like the way a conductor guides all those instruments to produce an amazing performance.”

In fact, James Rice was founded as a direct result of James’s perception of how contractors are regarded. After years in Hong Kong hedge funds and financial institutions such as Goldman Sachs, Barclays and ANZ, he ended up in project management, a field he says was combative and counterproductive.

“Early on, there were problems. I’d argue with my project directors. They’d focus only on the money and didn’t care about the people working beneath us,” he says of his struggles. After one particularly vitriolic disagreement about schedules, James quit.

“I was wasting my time. Largely, management in Hong Kong see contractors as merely the workers. They don’t care. I felt I had to do something about it, and the only thing I thought was worth doing was starting my own company and showing how it could – should – be done.”

The result was James Rice Contracting, an international construction contractor specialising in office fit-out and refurbishment projects. Founded in 2001 and based in Hong Kong, James Rice embodies its Founder’s ideals for contractors in the industry and, in a roundabout way, the man himself. 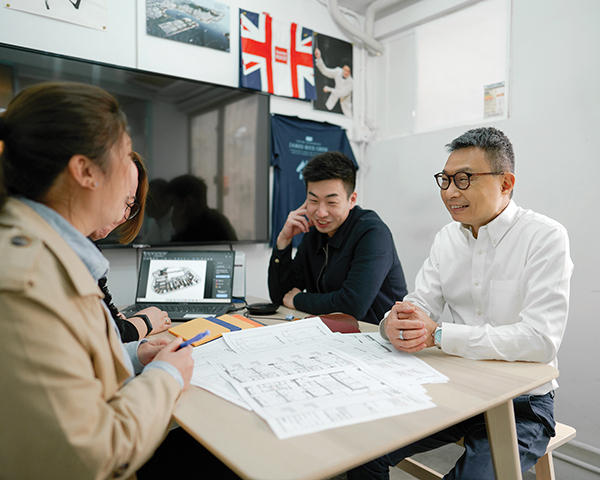 “Rice, in Chinese, is important. It translates to fàn,” James explains. “My great-grandfather’s surname was Fan. He was very poor and when he married, he took his wife’s surname Tsang. Years later, I feel as though my great-grandfather asked me to name my company James Rice. For me, the importance was there.”

This respect for the underdog carries over into the culture of the company, which is an amalgamation of influences from around the world; British construction firm 8Build is a close partner, and handles procurement.

“When I left finance and Hong Kong behind, I travelled the world and observed how contractors were treated wherever I visited,” James says. In particular, the working culture he found in Australia was both an inspiration and an affirmation of his own beliefs.

“What I found in Australia was that workers are treated like the professionals they are. It’s not just labour. I have many friends in Sydney who are immigrants, but they’re now doctors, nurses, professors, lawyers – and their social level is the same as the contractors. It’s no different. In Australia, they respect contractors, and that’s so important.”

The other lesson James learned in his travels was that it pays to have a hand in every job on a site. “I tried to learn as much as I could about every aspect of a job, from painting, welding and demolition to structures for the partitions and to how to make a table,” he reveals.

“If I, as a project manager, can do it, I can understand, respect and ultimately better manage those who do it for a living, and that’s why I established James Rice. So when I returned to Hong Kong, I was armed with a culture I’d developed from how contracting is done overseas.” The contracting game has changed in recent times.

Even before COVID-19 put the world in a stranglehold, the gig economy was on the rise. After years of formal contracts and set routines, contract work gave professionals the option to be able to choose one job at a time – a method better suited to the concept of a work–life balance.

At the same time, the pandemic has had a radical effect on workplaces. Social restrictions have forced companies to reassess the role of the office in their operations and this has led to some extensive fit-outs – an area of expertise for James Rice. “One understanding I gained during my time at Goldman Sachs was that I had to become a specialist in one area. I chose the office,” James says.

“I don’t do retail, residential or architecture. We’ve made sure offices define James Rice. Now we want James Rice to define the office, which is still a place where relationships are built and goals are achieved. It’s like when I think of soft drinks, the first thing that comes to mind is Coca-Cola. That’s what I want for James Rice.”

For contractors, building and maintaining a reputation is a heady mix of risk and trust. James understands this better than most, and strives to ensure his team makes the most of it.

“In Chinese business, the only word is trust. If you have trust, you can do business. If you don’t have trust, forget it,” he explains. One responsibility of a contractor is to assume the risk of a project. Corporations hire contractors to do office fit-outs precisely because they don’t have the means to do it themselves, James says. 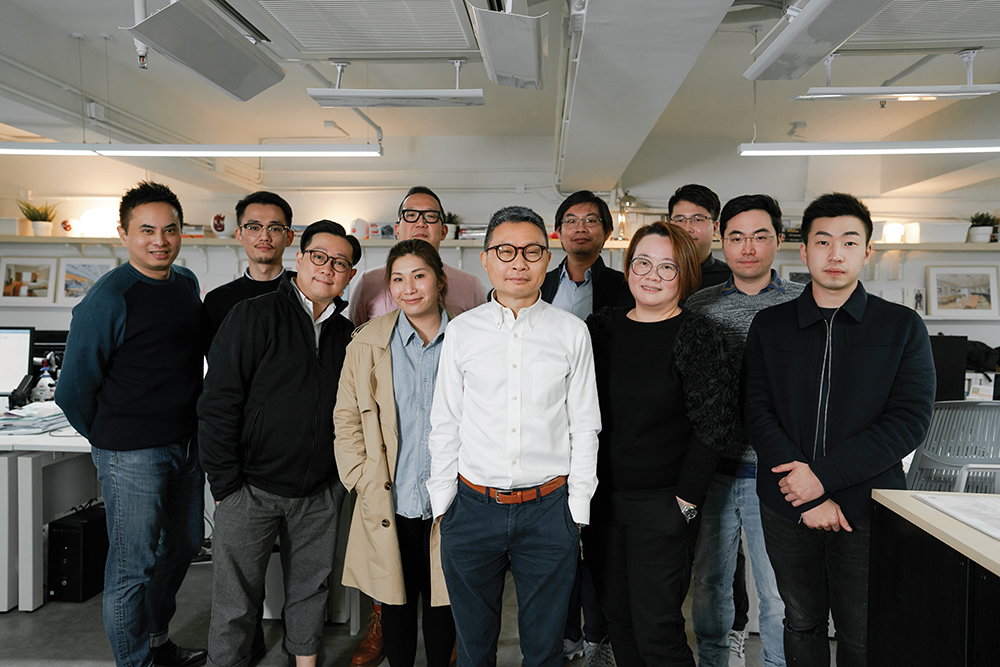 “They don’t understand the construction or duty aspects at all, so they trust us to do it. There’s a lot of trust involved. My clients understand that James Rice is a name they can trust, and that’s why more than 80% of our clients are repeat business.”

James Rice’s clientele has been built up over 19 years in tandem with James’s team, which has grown from a modest trio to a group of 25.

“I see my role as similar to that of a farmer,” he says. “I have to make sure everyone in my team has a job to do.” This leadership extends to the company’s subcontractors who, like its clients, are largely familiar.

“I make sure my team works with people that make them feel like a family. I want it to feel like a cohesive unit, not like working with strangers every day. Time and energy spent making new bonds daily is time and energy you could be spending on the work, which is much more important.”

The James Rice team consists of an international assemblage of top performers, but despite the diversity, the familial cohesion works. “I visit the site every day. I know everyone’s names,” James says.

“Even the cleaners, who I believe are the most important. When the client arrives, they need to see the site is clean and tidy. It doesn’t always happen that way in Hong Kong, so by making sure it’s done, we have a point of difference.”

Bucking Hong Kong trends is ultimately what’s given James Rice its uniqueness in a growing market, and what James says is carrying the business into the future. “My greatest challenge is to make James Rice one of the best construction companies in Hong Kong,” he says.

“But at the same time, I want to change the culture around contractors in Hong Kong. I want my onsite contractors, the labour, to feel exactly the same as contractors in Sydney, for instance.” To achieve this, James believes the key is to spend time with his team.

“We’re all the same. I choose my staff, I look after them and I spend time with them onsite. You have to,” he insists. “Understanding the people who work for you is what makes a great leader.” 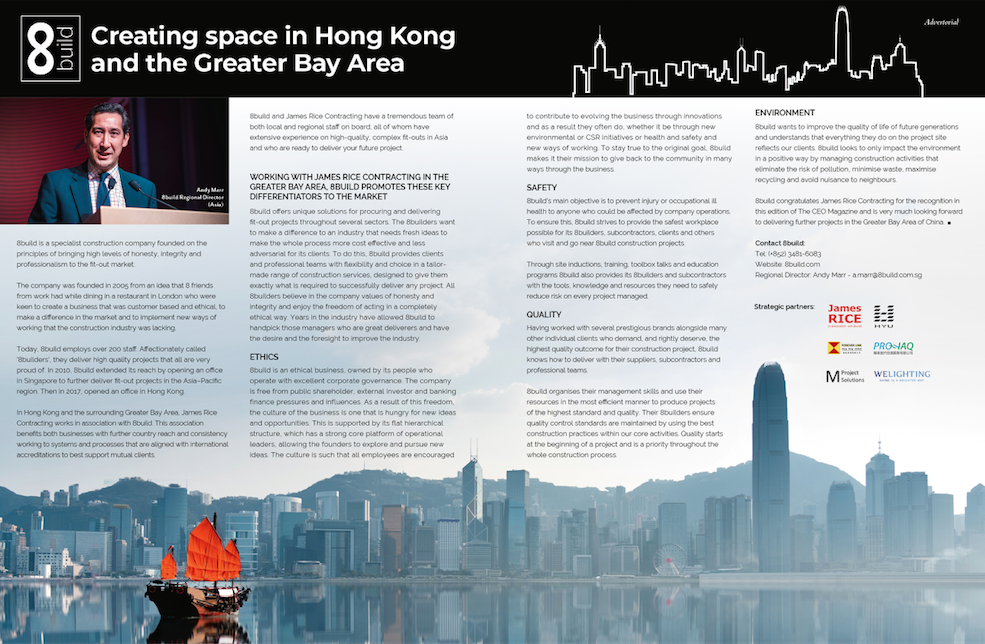