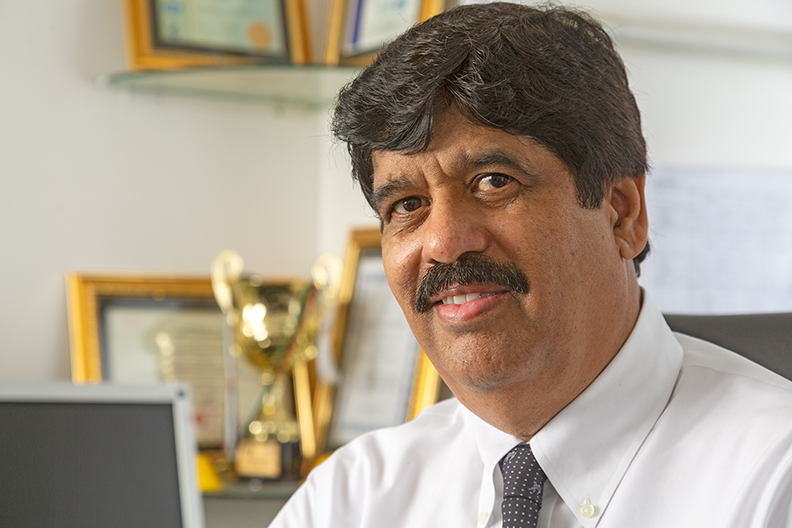 Asked about building a successful business, Muhammad Asghar reveals he is guided by a principle that for some is unorthodox. “The client doesn’t come first. The employee does.”

This is the approach he has taken for his business for the past 22 years. Muhammad is the Founder and Managing Director of Water Seal, a waterproofing construction company based in the UAE, which he has built from the ground up since 1998.

“Dubai is the land of opportunity. From all over the world, people come here and take their chance. It’s an amazing place to live.” Amid this change in scenery, Water Seal was founded. Muhammad’s taste of the industry in Saudi Arabia drove him to fill the market niche, providing specialty construction services.

Beginning with a single location in Sharjah, Water Seal has since expanded into Dubai and Abu Dhabi. More recently, the firm also embarked on its first overseas foray into Pakistan. “If we take care of our employees, the employees will take care of our clients,” Muhammad says. “They are the pillars of the company.”

He believes that this ‘employee first’ approach is why some of them have stayed with the organisation for more than one or two decades.

“It’s about having the right people in your team and then coaching them to learn and excel, treating them well and retaining the talent. We are proud to have employees who’ve been working with us for more than 10, 15, even 20 years.”

If the numbers are anything to go by, Muhammad has not misplaced his trust. He reveals that 15–20% of the company’s business is from existing clients, indicating a high level of customer satisfaction.

“This is thanks to the contribution of our people,” he acknowledges. In fact, employees are not just co-workers. “We are more like a family – of professionals.” Building this family is a challenge that has defined Muhammad’s entrepreneurial journey. 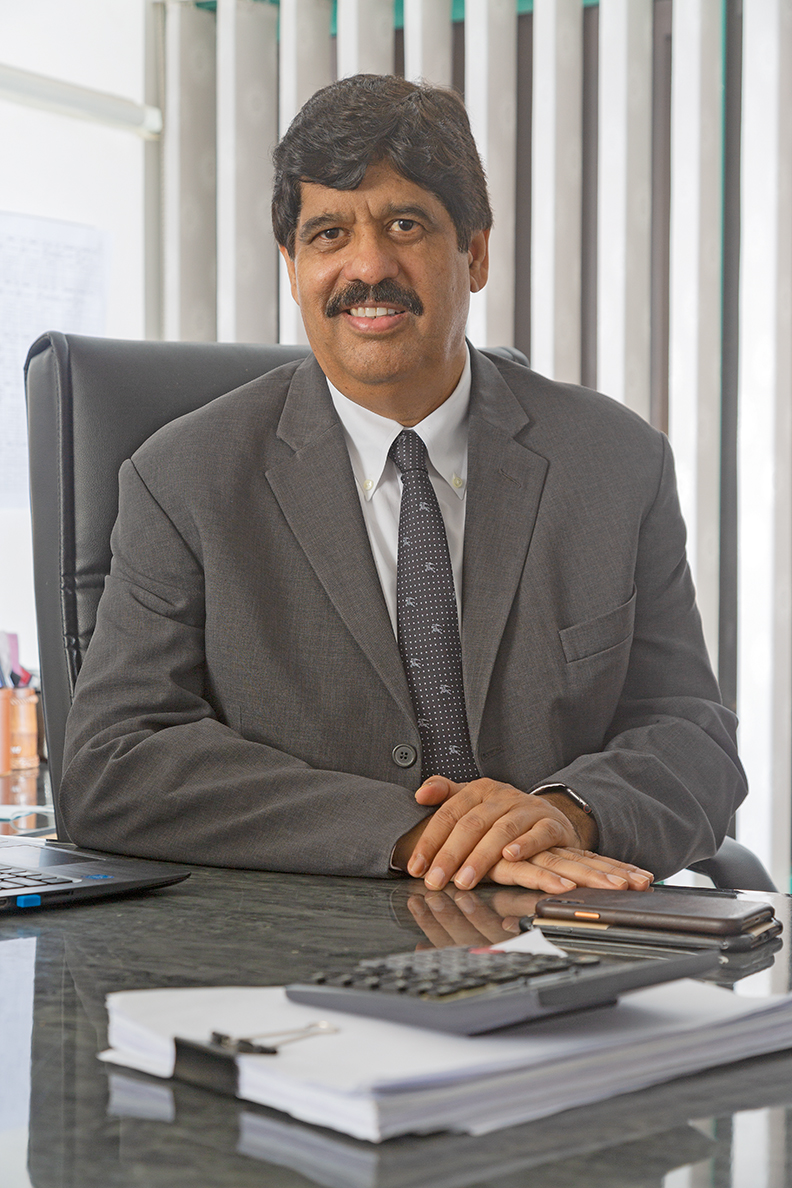 Water Seal was established after he identified a gap in the industry following a stint in a Saudi Arabian waterproofing firm. “I learned, upon joining this field, that it faces a shortage of professionals, even though waterproofing is important in any building,” he recalls.

“The market was hungry and there were great opportunities for specialised activities. This was what motivated me to establish the business.”

Describing itself as one of the premier waterproofing contractors for the UAE’s construction industry, Water Seal has since expanded into roofing, structural strengthening and floor treatments, specialising in areas like concrete, thermal insulation and industrial floor systems.

According to Muhammad, like waterproofing, these are all highly specialised sectors within construction, where finding the right people with the right skills can be difficult. The situation has not changed, even after more than 20 years – and Muhammad has discovered that the shortage of qualified workers isn’t a problem unique to the UAE.

“We have noticed the same lack in South Asia, which is a big market and have received enquiries from there,” he reveals. North Africa is another region he identifies as having the same issue. Muhammad says the lack of a trend towards waterproofing and the absence of any professional waterproofing has a net detrimental impact on the appearance of cities.

Over the course of its three decades, Water Seal has been contracted to work on a number of notable projects throughout the UAE. Some of these include the Sharjah Aquarium, Abu Dhabi’s City of Lights, the Dubai Metro Project and several hotels and other large buildings. The variety of these projects demonstrates a versatility in the clients that Water Seal can take on, as well as the extent of the market in which the company works. “Water Seal has the sole contract for the region’s reroofing work,” Muhammad says. “Because of the agreement, now we have at least 10–15 jobs for Abu Dhabi, which is 23% of the area. So in that area, all the buildings, colleges and educational institutions and religious mosques will be done by Water Seal.

Ever open to new opportunities, this has inspired Muhammad to look beyond the borders of the UAE. He highlights a project Water Seal completed in Karachi, Pakistan for Getz Pharma, one of the country’s leading pharmaceutical companies.

“The World Health Organization required them to use a specific type of flooring, but they could not find a local professional, so they contacted us.” The success of the Getz Pharma project and interest from potential clients in South Asia have determined Water Seal’s third country of expansion: India.

“We have great opportunities in Pakistan and India in the coming months. After these countries, we will enter the big market of Saudi Arabia,” Muhammad reveals. Back in Water Seal’s home territory of the UAE, he is expecting nothing but steady growth for the company.

“In the past 15–20 years, the number of buildings in the UAE has doubled or tripled. When I first came here, many areas were a complete desert. Now, it’s all concrete,” he says.

“The time has come for all these buildings to be refurbished – there are structures that require strengthening and roofs that require reroofing. This is a region with great opportunities for those in specialised construction.”

As the industry continues to grow, Muhammad hopes to see the importance of waterproofing more recognised by the broader construction industry. “There should be specialised consultants for waterproofing,” he says.

“During a project’s design stage, waterproofing specifications should be put forward by a waterproofing consultant only. Basement waterproofing is an especially vital element, so there must be a decent budget allocated to it rather than what amounts to a cost-cutting approach.”

Muhammad believes a key factor for Water Seal’s success and a unique selling point that keeps it ahead of its competitors is its willingness to invest in research and development. “We do a lot of R&D in-house,” he points out.

“We offer tailor-made solutions to match every project’s requirements, and we never hesitate to invest in the latest equipment. “Of course, leadership plays a vital role – making the right, bold decision in tough and challenging situations can lead to significant change and progress.”

As an example, the company has 29 polyurethane (PU) reactors, which Muhammad proudly claims to be the greatest number owned by a single company in the UAE. These machines spray the PU foam that’s commonly used as a thermal and sound insulating material in walls.

Water Seal has worked with German polymer materials firm Covestro and American conglomerate Honeywell to develop a fourth-generation blowing agent for PU foam. Simply put, a blowing agent is a substance that expands PU materials with injected air, resulting in a foam product. “We are proud to pioneer the very first application of this innovation in the Middle East, after the US and Japan,” Muhammad says. 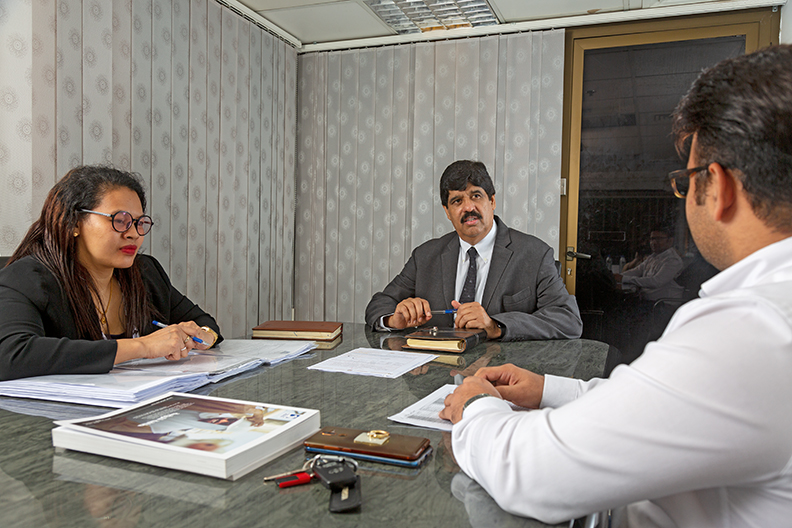 “We don’t just buy equipment. We also work closely with our partners to develop and improve products and systems.” Such strategic collaborations are something the company is always on the lookout for.

“At the moment, we already have local and international partnerships with many leading manufacturers, but it’s something we intend to work on more,” he reveals. One of Water Seal’s most prominent partnerships is its distribution agreement with German building materials giant Knauf. For the foreseeable future, the company’s stronghold in the UAE is guaranteed.

“We have attained a blanket agreement for the reroofing, waterproofing and energysaving projects for a big area in Abu Dhabi, which includes hundreds of buildings,” Muhammad says proudly.

According to him, all the projects combined would comprise about 23% of the total area of the city. “It’s rewarding to see some of the world’s most iconic buildings and know that we have contributed to their construction.” 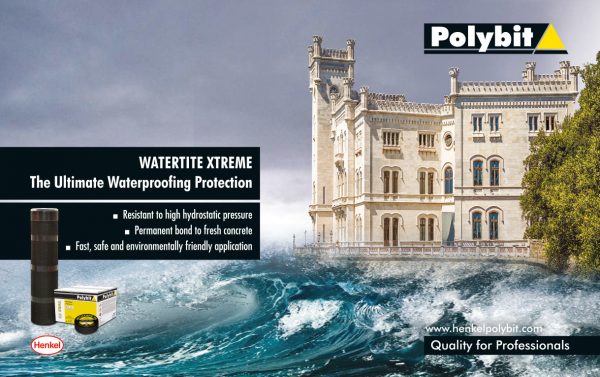 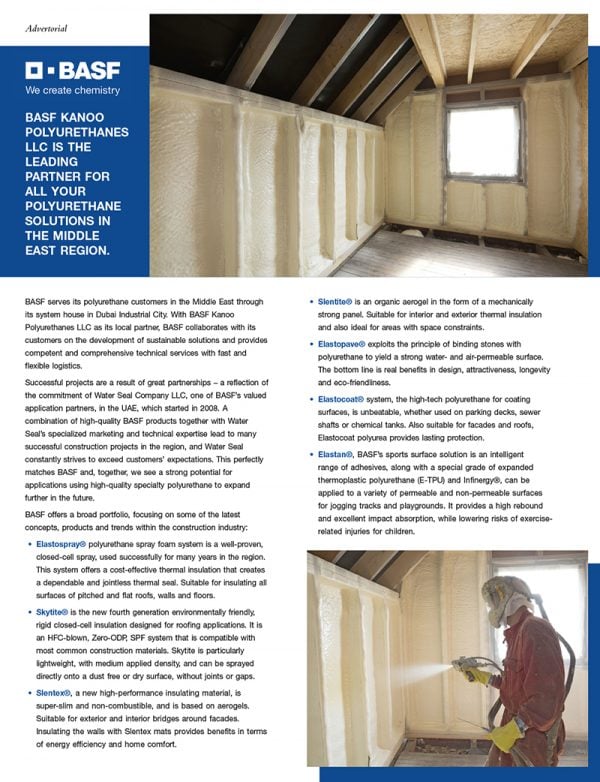