“We Did It Our Way.”: Steven Simeoni 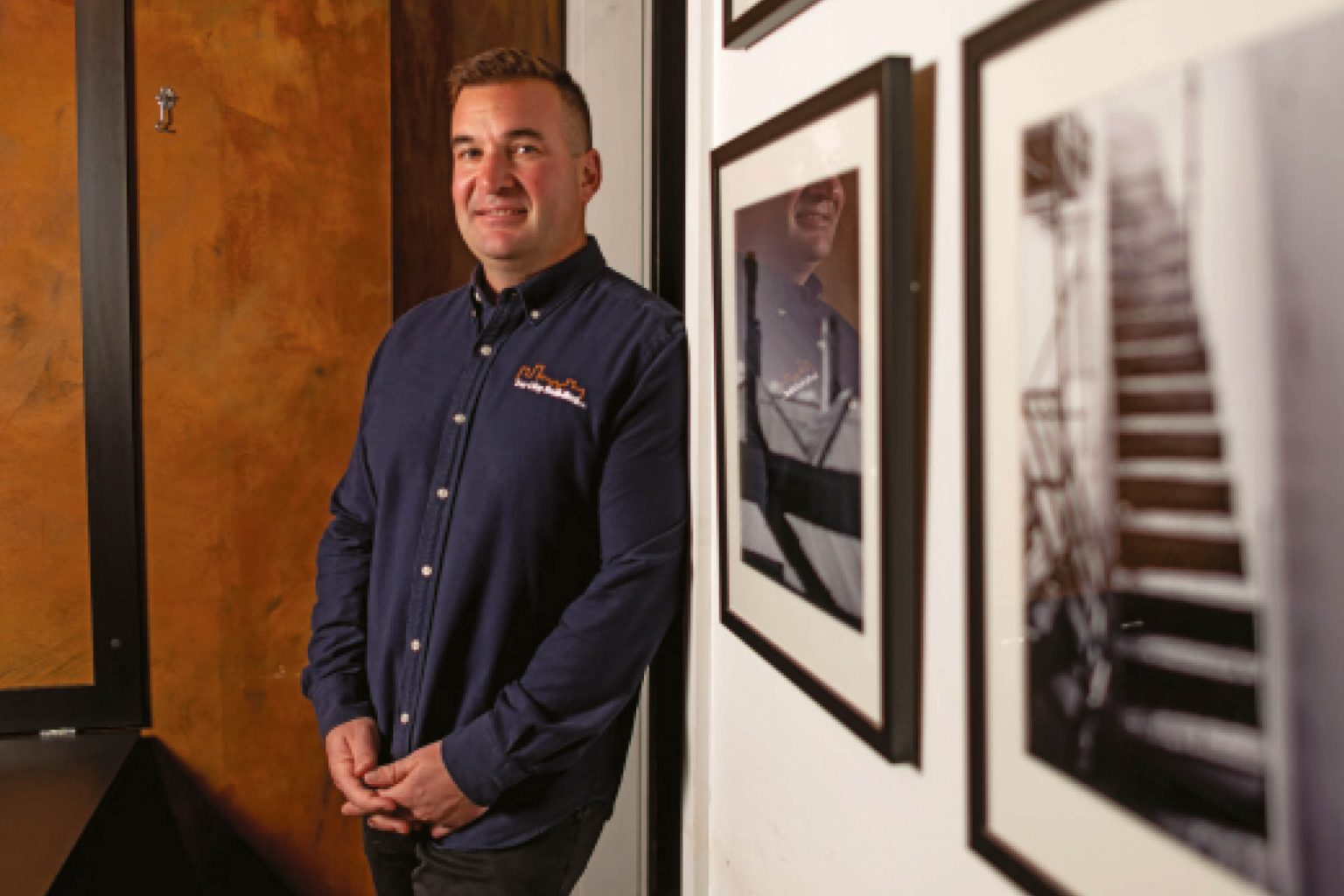 At least twice a day, Tas City Building Director Steven Simeoni gets up from his desk, slides his earphones in and then takes a walk through nearby Cataract Gorge in Launceston where he might encounter a wallaby or maybe one of the resident peacocks. 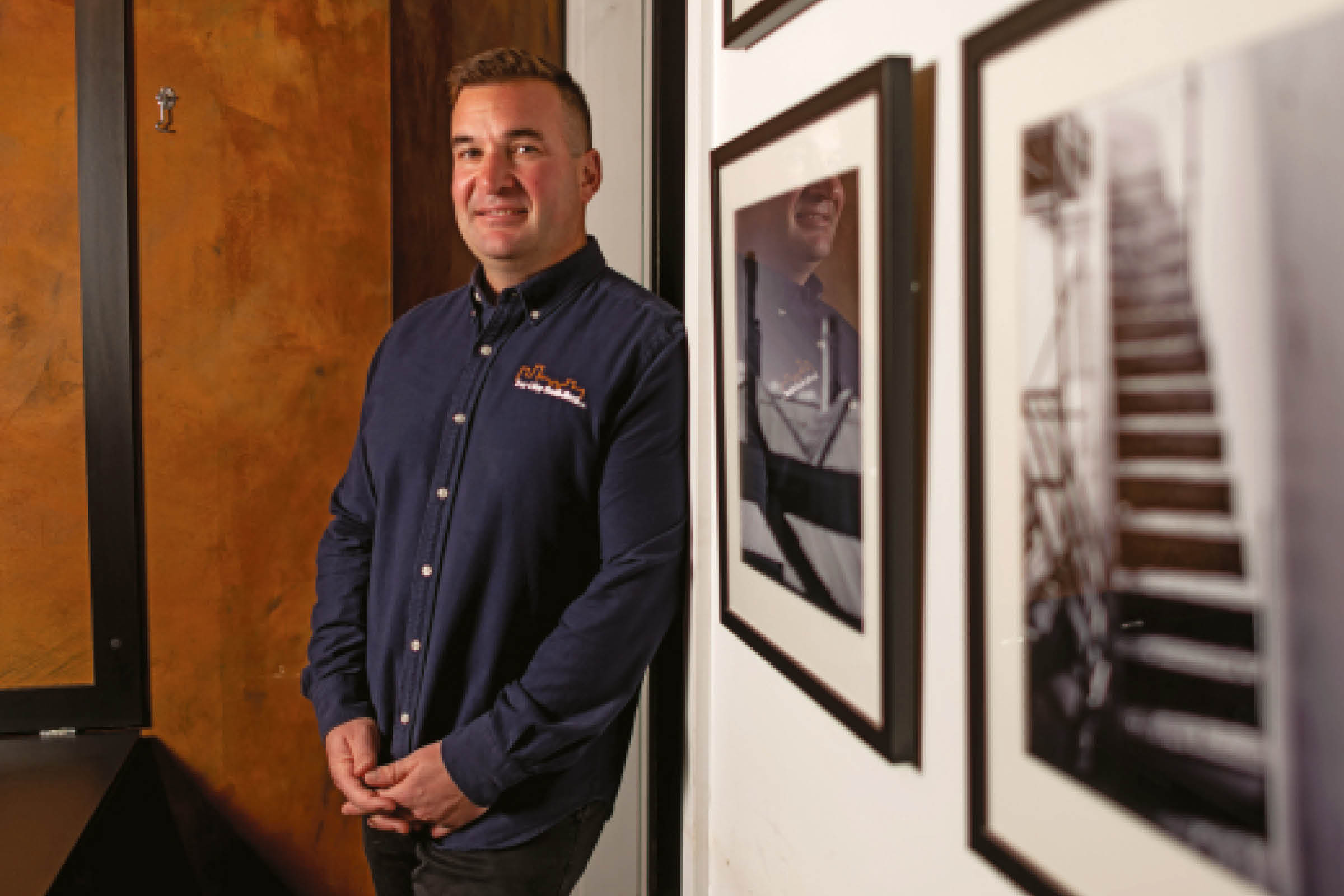 The daily ritual helps him to clear his head and is just one of the benefits of working in beautiful Tasmania. That along with the fact that the island state is currently undergoing a construction boom. Government stimuli such as HomeBuilder has driven up the number of residential properties being built across Tassie.

Premier Peter Gutwein revealed earlier this year that annual dwelling approvals figures to March were at their highest level in more than 25 years. The April ‘Building and Construction’ report by Master Builders Tasmania confirmed a 61.3% spike in new building approvals, which it attributed to the HomeBuilder stimulus and the “enthusiasm from Tasmanians to build a new home”.

There were 458 building approvals over the month,with 375 approvals for detached houses and 30 for units or apartments. The burst of activity is great news for Steven,who founded Tas City Building in 2012 after two decades working for large construction firms. “We built Tas City Building on the idea of being ourselves,” he tells The CEO Magazine.

“We treat people how we’d like to be treated. That’s how you win jobs. That’s how you get a good reputation.” Starting off small as a two-man band with a focus on “inner city living”, the company gradually expanded and now counts 60 people in its ranks just nine years later. Of those, 45 are based in Launceston where it has played an important role in the “reinvigoration” of the city, Tasmania’s second largest. 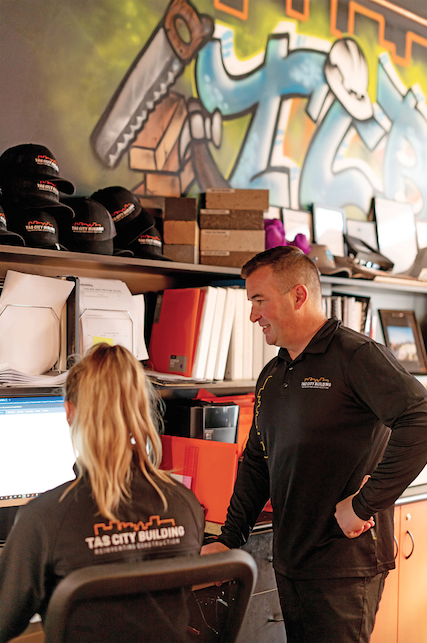 Notable projects in the riverside city include the restoration of Kinross House, an iconic 1840s heritage building, along with Change Overnight, an 18-room hotel that offers guests the chance to donate to one of its eight causes with each stay.

Tas City Building also built its own office building on Elizabeth Street, with the company about to start work on its new premises, which will be located within a heritage tyre factory on Gleadow Street. Since founding the company in Launceston, Steven has grown its reach to Hobart, which is where the remainder of the team is based.

In the capital city, Tas City Building has worked on the offices of Tassie shoemaker Blundstone among others. “We are very lucky – and grateful – for the opportunities we’ve had.” Another exciting project is taking Steven’s eyes away from the inner city and out into nature, where he feels truly at home. The new hotel will be situated close to Cradle Mountain–Lake St Clair National Park, set in the forest with sweeping views of the dramatic 1,545-metre peak.

“It’s a two-stage project, so first we will do the 20-room hotel along with eight chalets and some infrastructure,” Steven reveals, putting the cost of this phase at A$5 million. “Stage two is A$8 million and includes the remainder of the chalets running up the mountain as well as a restaurant.”

Development on the A$16 million project will start in September. “It’s going to be really nice – very high class and beautifully set in the bush without disturbing it,” Steven shares. “Those types of properties have really taken off in Tassie. It will be the only hotel with a direct view of the mountain.” Steven describes the rate of the company’s expansion as “healthy”.

“We’ve got a really good reputation around the whole of Tasmania,” he says proudly. “We started slow and gathered momentum by trading on old-school values and treating clients, subcontractors and architects well. It’s also important when working with people to joke, laugh, smile and be OK with not winning every battle and to sometimes give in.”

These old-school values have permeated the company culture, with Tas City Building attracting like-minded people since the word go. “It’s a no-brainer really; work hard, treat everyone fairly, have a joke,” he explains. “Like I said before, just treat people the way you want to be treated. That’s all you have to do in life.”

Not being afraid to do things differently is also a big part of the company’s success so far. “We’re doing the opposite to the others and that’s getting us in the limelight,” Steven reflects. 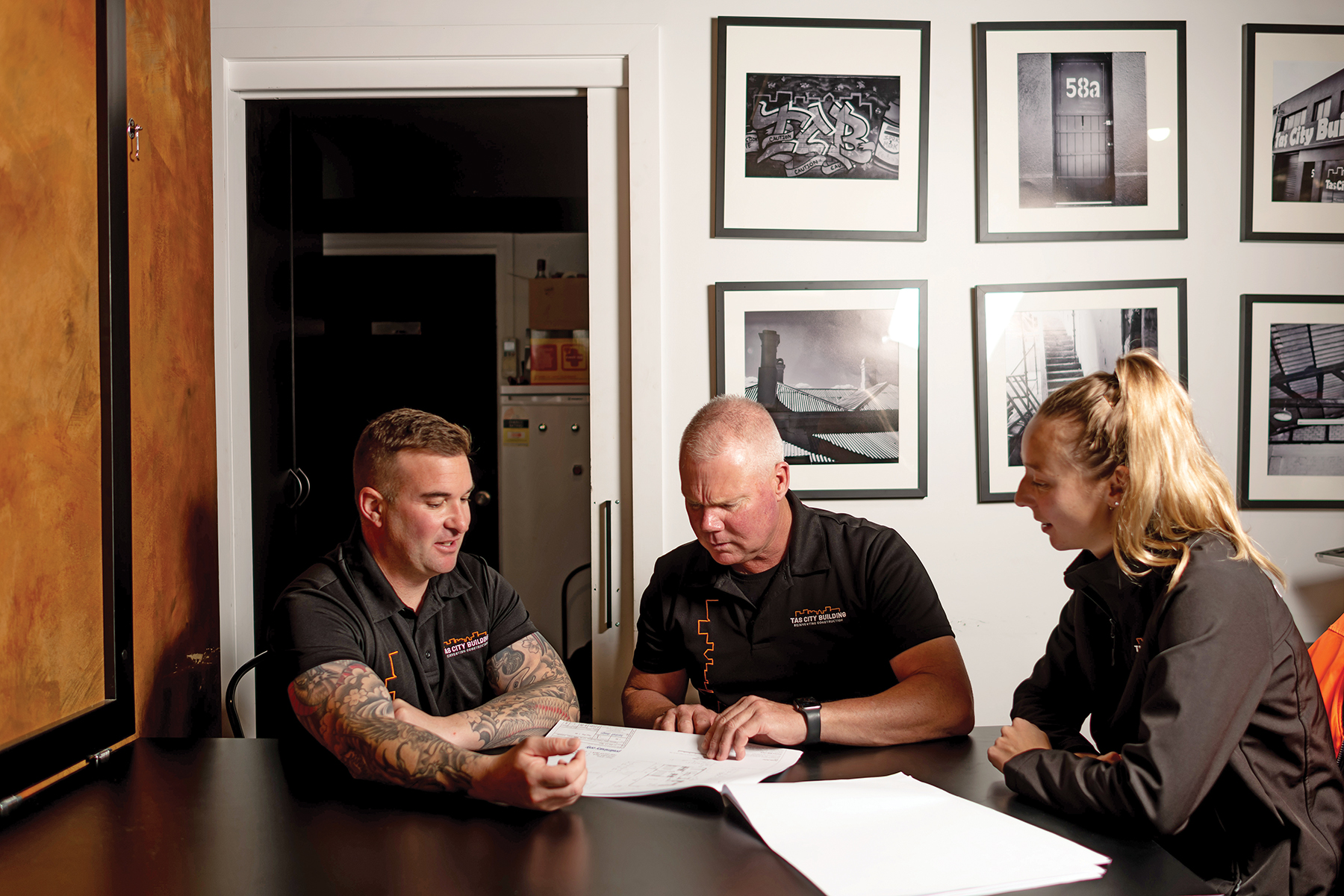 One main point of difference is its focus on advertising, something often overlooked by construction companies. For example, Tas City Building caused quite a stir with bold signage on cars and buildings around town.

“We overdid it to the max and it’s become a bit of a joke in the construction world,” he laughs. “But builders never advertised here in Launceston until we started doing it.” Talking to other builders is another way of driving the business forward, according to Steven.

“We’re not against other builders and there’s enough for everyone so let’s work together,” he expands. By bouncing knowledge and ideas off of other people in the same industry, exciting new ideas are born. All these things help set Tas City Building apart.

“I love the word pioneering because we are not conventional – actually quite the opposite,” Steven says.“We did it our way. We’re still doing it our way and we’re winning.”

The company is so confident about the outlook that it is making some serious investments of its own in the fast-evolving construction landscape. In the last financial year, it ploughed around A$5 million into projects across Tasmania, with Steven planning to grow that to A$7 million this year.

“Our vision for our people and city is to give them back security and a sustainable future,” he shares. “The investments we are making now are underpinning good and bad times. The money that Tas City Building turns over revolves back into the business.”

This level of investment is good news for Tasmania’s long-term economic recovery. Although commercial building activity in the state is “strong”, the vast majority of this is government-funded, according to Master Builders Tasmania.

The industry body has underlined the need to attract private investment back into the market to ensure a sustainable future. Steven highlights some of the projects that Tas City Building is investing in as eight affordable houses in Perth, 20 kilometres south of Launceston, two accessible units in West Launceston, two houses in Riverside, four inner-city units on Elizabeth Street and three luxury apartments on Brisbane Street, also in the inner city. 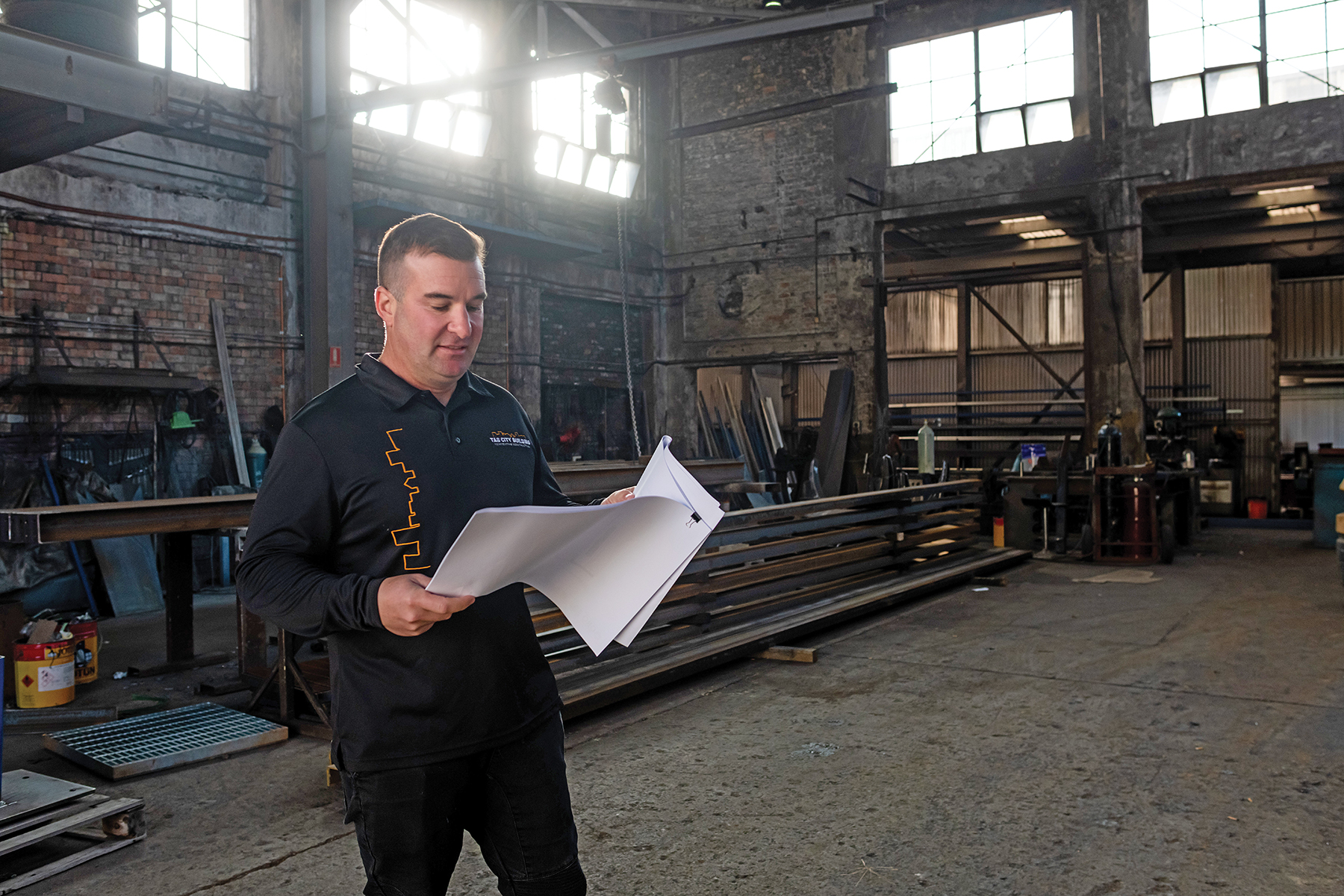 On top of that, are commercial offices and apartments on George Street and Tamar Street. Meanwhile, away from the inner city, the company is also invested in the Cradle Mountain hotel and has also acquired waterfront land at Great Lake, where it plans to build three chalets. Currently, Tas City Building has a whopping 105 projects on the go.

“In two months’ time, we start on another 11 on top of our ongoing building work in the city,” Steven says. “It’s just awesome.” However, the rise in building activity has created some challenges for the construction sector. Demand has been so intense that skilled people have become a hot commodity, Steven reveals.

“Down here, we’re booming, so skilled tradespeople are hard to find,” he admits. “Everyone’s paying good money so some companies are going around poaching other workers.”

This demand and the quirks of a different generation mean that workers today are quite different to those of years gone by, according to Steven. In order to retain staff at this critical time, he has had to rethink the way he interacts with this younger demographic.

We started slow and gathered momentum by trading on old-school values and treating clients, subcontractors and architects well.

“When I was an apprentice, I was respectful and thankful for my job,” he reflects. That is our challenge now – keeping good guys while it’s so busy. A lot of money is out there at the moment so some just want to do their own thing. It’s about working to everyone’s strengths, finding out what they want and just coming to a happy medium.”

The boom has also created a shortfall of supply materials, which has been further exacerbated by the supply chain issues created by the COVID-19 pandemic. At the moment, timber is in short supply, as are windows and roof trusses.

These shortages have prompted a wave of price hikes as well, which has driven up the costs of construction. In order to ensure continued supply of materials that are now difficult to source, Steven ensures he has good relationships with a wide range of suppliers, many of whom he has been dealing with for more than 25 years.

His emphasis on old-school values means that Tas City Building is very well regarded within the industry. “Another tricky part is you need to work with different suppliers in the same field sometimes,” he says.

“You can’t always use the same supplier every time because you won’t get value for money if you’re in a tender process. So we’ve worked out that you need at last two suppliers in each field so you can fall back on another one if the others are too busy.”

With a lot of work to do with councils to make this rising number of projects a reality, it is a busy time across the board. But by working closely together, stakeholders are coming together to make it happen, according to Steven. Juggling so many balls sounds rather exhausting.

To keep on top of things, Steven prioritises his daily walks through Cataract Gorge. Getaways to Highland Lakes allow him to indulge in a little trout fishing and enjoy invigorating fresh air.

“I don’t get stressed,” he insists. Despite all his success, Steven is staying humble. “I’m just about small goals and small business that have helped us hit the top in a short amount of time. It’s really exciting.”