You’d be forgiven for expecting someone armed with a master’s in 20th Century Literature and a PhD in Philosophy of Education – from the University of Cambridge no less – to be a tad stuffy.

But just as you begin to understand how literature did indeed help shape the life of Ian Lambert, The Scots College Principal starts talking sport. And not just cricket, rugby and rowing, everything you’d expect a private school head to support; we’re talking dawn patrol, tossing a board in the back of the car and chasing waves.

“Yes, I still surf,” he laughs. “Mainly at Bondi, although my favourite place is mid-north New South Wales, a spot up at Crescent Head where there’s this beautiful white-headed wave that comes through.”

Ian’s passion for surfing was cultivated growing up on a farm along the NSW south coast and finishing school on Queensland’s Gold Coast. Meanwhile, his love for the humanities was triggered by his thirst for exploring different ideas. It was a little surprising then when Ian ignored his passion and began a business degree after leaving school. “It didn’t feel like it was really me,” he admits.

“I had a walk along the beach with my dad and talked to my girlfriend, and they pointed out I was great with kids and loved learning. It made me realise I was on the wrong path. I’d always loved school and the community surrounding it, so creating opportunities for children was a better option.”

Describing himself as energetic, Ian jumped into school life “boots and all” as a young teacher, coaching teams, running clubs and societies and going on camps. It’s this healthy mix of pursuits that proves a bonus for the 2,050 boys he leads from preschool to Year 12.

Among them are about 240 boarders from country Australia or overseas. Classrooms and facilities are spread across several campuses, with the main school headquartered in Sydney’s east at Bellevue Hill.

We need to lift the bar and stop dumbing down our expectations around what our boys can achieve.

While academic excellence is certainly pursued at the Presbyterian school, Scots is focused also on developing strengths outside the classroom. The Bannockburn campus on the NSW south coast is the Active Learning site, a 300-hectare venue where boys enrich their education through practical approaches such as testing water and soil, calculating profit and loss of cattle and studying the effects of pests, global warming and rising sea levels.

Meanwhile, Year 9 students spend two terms at the college’s Glengarry campus in Kangaroo Valley where, devoid of mobiles, gaming consoles and television, they participate in an outdoor education program that includes a 200-kilometre hike, mountain biking and canoeing.

This year, the Glengarry adventure was taken on the road after bushfires ripped through the valley, burning down the campus. The boys moved from one scout camp site to another, creating their own adventures and studying along the way.

“We need to lift the bar and stop dumbing down our expectations around what our boys can achieve,” Ian explains. “As Roald Dahl said, ‘The more risks you allow children to take, the better they learn to look after themselves.’

“Unless you’re providing opportunities where boys are able to experientially learn in challenging and slightly threatening environments, they’ll just stay in their safety zone. The trouble today in Australian schools is that the conversation is all about the classroom, yet the classroom is only a portion of what a good education program could and should be. Studying algebra and literature is not the most thrilling thing for teenage boys, whereas reading poetry around a camp fire or having a face-to-face conversation after you’ve just had a challenging adventure is pretty exciting.”

As a student, Ian was an allrounder, captaining The Southport School, playing the sax in bands, commanding cadets and competing in cricket and athletics, while going on to represent Queensland in rowing and rugby.

Sport is compulsory at Scots from preschool – where it is largely based on games – through to Year 12, with Ian believing a self-awareness of good physical health is key to encouraging young people to avoid damaging their bodies with drugs or excessive alcohol. 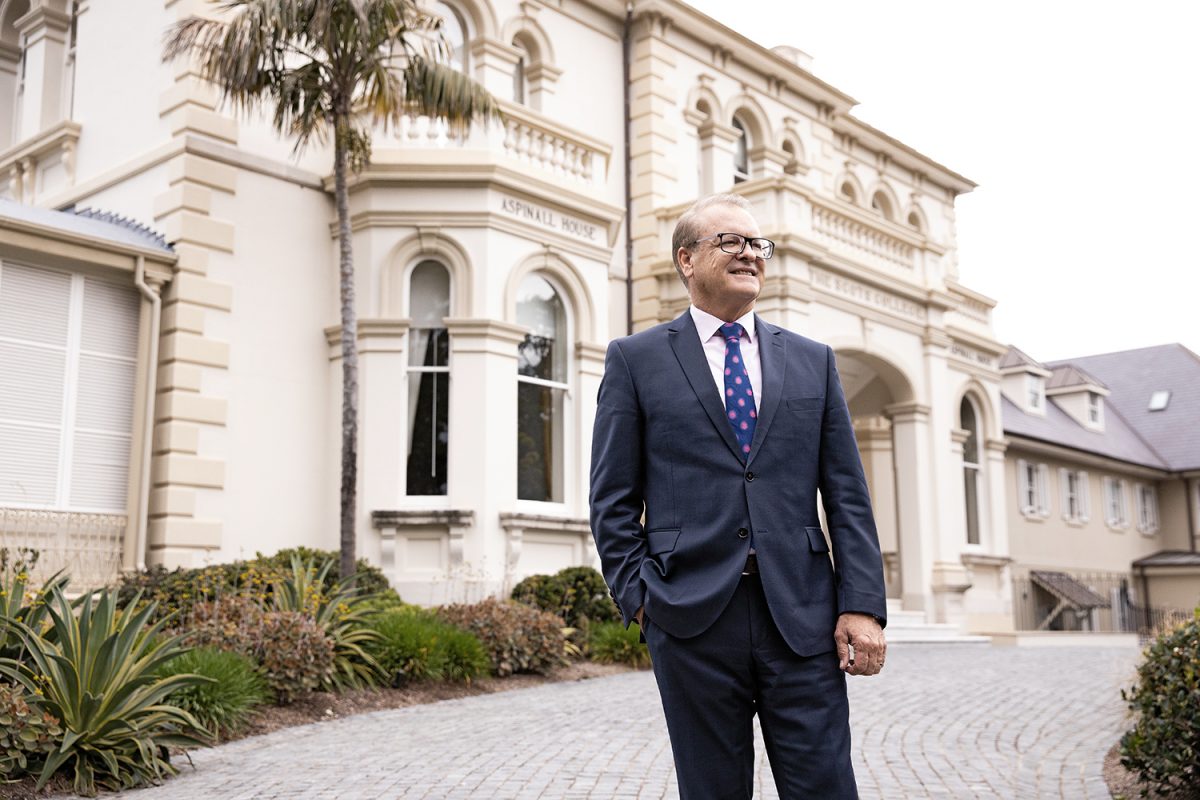 “It troubles me a little bit in the 21st century that we’re not playing enough sport and young people are not engaged,” he says. “You see them sitting around shopping centres on their phones and they should be out kicking a ball around. We teach the boys about their anatomy and tracking their growth so they can see what’s happening to their body.

“We also measure sports performance to show them that, even though they may not be good at something now, they can work on it and become good in four or five years’ time. That’s really important.” Ian was Principal of Perth’s Swan Christian College before joining Scots in 2007.

His love for the school was developed much earlier on, however, thanks to his father, a boarder at Scots from 1944–48. He grew up hearing stories of his dad’s adventures at the school, including the enormous responsibility and expectations placed on students.

“They were pretty much being prepared for war,” he reflects. “The cadets were firing mortars and live rifles on the main oval, and they’d carry the rifles home. The trust they gave those young men was phenomenal.”

The Scots College was founded in 1893 and one tradition always revered is The Scots College Pipes and Drums, launched in 1900. There are 500 students learning and playing the bagpipes, with half that number comprising the band, which has worn the tartan of The Black Watch, the Royal Highland Regiment, since 1931.

“Our boys travel around the world playing at amazing venues and there’s a real pride in belonging to the band. It creates a little tribe,” Ian says.

“The boys usually leave school with their own set of bagpipes and on Anzac Day during COVID-19, the call went out for every old boy with a set to play out on his street. Music is a really important part of anyone’s education. It’s good for brain development and striving for excellence.”

Ian and his wife, Alison, have raised three children; two boys who attended The Scots College and a daughter who graduated from nearby Kambala School. Living on campus, he freely admits he couldn’t have done his job without the endless support Alison puts into the school community.

“Growing up on farms with my mum and dad, if you weren’t the salt of the earth, normal, and you didn’t treat everyone the same, then you were in trouble,” he reflects. “Teaching has provided me with an amazing life to date; sometimes I pinch myself and think, ‘How did this little farm kid end up here?’”