Michael Parker remembers all too clearly the day he failed a class. Not as a pupil, but in his current role as Headmaster of Sydney’s Newington College. He was teaching when his lesson in fake news took an unexpected turn. Somehow, he’d managed to convince a quarter of the Year 7 class that it was possible the world was flat.

“I walked out thinking, ‘How did I achieve that?’” he recalls. Michael’s seemingly impossible achievement emerged after using American basketballer Kyrie Irving’s infamous flat Earth comments and pointing his class to a “ridiculous” website that backed up the claims.

“I went, ‘Ha, ha, ha, look at the way the website is twisting the idea,’” he says. “Anyway, they had a bit of a browse through it, only to turn around and say, ‘Actually, there’s something in this.’

“I’m going, ‘No, no, no! Don’t think that!’ But I took a poll at the end of class and a quarter of the kids thought not that the Earth was flat, but that it was possible the Earth was flat. It was a case of fake news spreading faster than real news. Probably my most failed lesson ever.”

However, Michael’s “failed” lesson is indicative of his enormous success at getting his 2,000-plus Newington boys to think outside the box. Alongside the regular subjects leading to the Higher School Certificate or the International Baccalaureate Diploma and the school’s outstanding vocational education and training program, critical thinking is ingrained in the school’s academic program.

A critical thinker, Michael wants his students to learn how to challenge, to seek out the truth and sort fact from fiction. Along with its philosopher in residence program, the college is now planning a critical and ethical thinking centre.

Its slate of activities will incorporate the annual Ethics Centre lectures that have been a fixture at Newington for many years and have hosted heavyweight intellects including philosophers AC Grayling and Peter Singer, Oxford University Fellow Rachel Botsman and Julian Burnside AO QC.

Backed by staff he describes as more mentors and coaches rather than “oppositional figures”, Michael encourages a sense of tolerance and diversity throughout the school. A snapshot of the Newington community reveals parents from 31 different countries, students practising 11 faiths in addition to those with none, and 50 boarders from 18 regional towns and 14 international cities.

Every day he joins his teachers “in the trenches” to take a different class. It’s a commitment partly to help him get to know the boys, but mostly, he confesses, it’s an act of self-indulgence. “I’m selfish, I just love it,” he says.

“Education is in my heart and soul. Young people are just full of optimism and ideas and you want to be around that. Taking a class means I get to be in front of everybody and be a part of it.

“COVID-19 certainly taught us how to be more flexible in our delivery and showed everybody that if you need to turn on a dime, you can. It proved to the kids why schooling is actually a good thing and made them appreciate it. I think it also made the parents appreciate the teachers.” 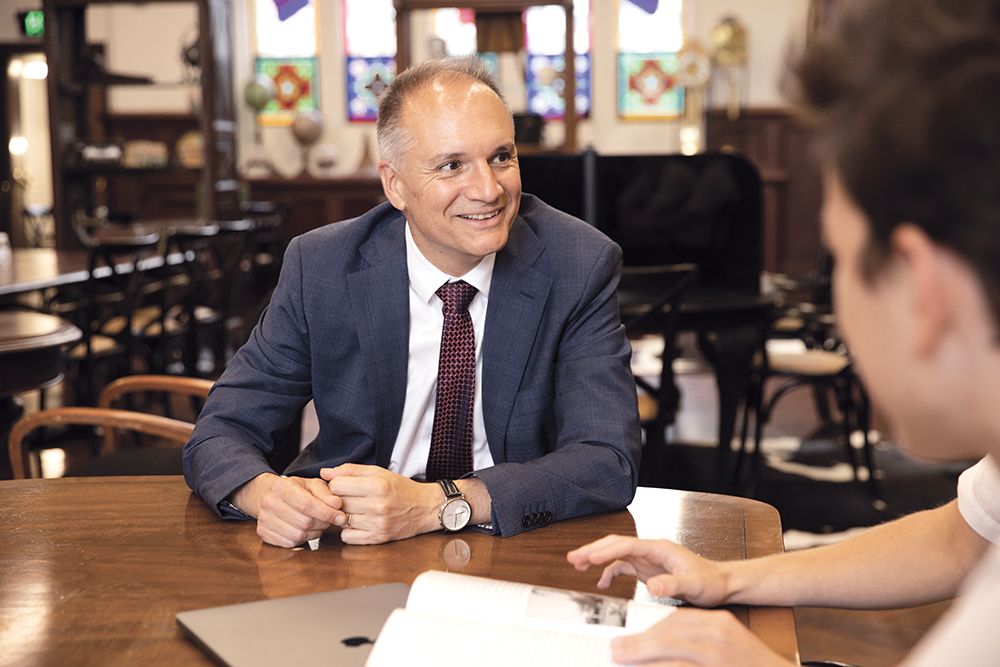 Back in the classroom, virtual reality has been rolled out to connect students with the most unlikely of topics – the college’s strategic plan. It’s immersive technology that triggers curiosity in a way more traditional face-to-face teaching can’t – thanks in part to the opportunity it gives kids to fly on the back of a dragon.

“You can talk about all these things and the kids will switch off pretty quickly, but if you put it in VR simulation where you’ve got an actual dragon breaking out of the concrete and flying up over Sydney, the kids just go, ‘Wow!’ I walked past one who said quietly, ‘This is the happiest I’ve ever been, I’m flying a dragon’. They are amazed by it, entranced by it.”

Spread across three campuses, Newington was founded in 1863 by Methodist minister the Rev John Manton. It opened with just 16 boys at Silverwater, along the banks of the Parramatta River. In 1880, the school moved to the Inner West suburb of Stanmore, with 70 students starting first term in January 1881.

In 1938, primary school Wyvern House opened around the corner, followed by a second prep school in Killara on Sydney’s North Shore in 1957, which relocated a decade later to the neighbouring suburb of Lindfield.

Today, there are 700 students in prep and 1,400 more in high school, with boarders joining from Year 9-12. Father to two teenage daughters and married to Fiona, a Senior Lecturer at UNSW, Michael joined Newington College as its 19th Headmaster in January 2019, having previously been the Head of English from 2002–07.

He was also the Deputy Headmaster of Cranbrook and then Headmaster at Bowral’s Oxley College before joining Newington. Newington is non-selective, so Michael established a Headmaster’s List for Academic Effort to recognise boys who may not top their subjects, but certainly give them their best shot.

“For many, university education is great, but some of the kids I think are the most worthwhile go straight into jobs,” he explains. “Every individual is different.”

Indeed, Michael’s entry into an education career was a little different as well. He earned a combined degree in arts and law and then completed a summer clerkship before he realised he was on the wrong career path.

Education is in my heart and soul.

While he appreciated the value of law, he sensed it just “wasn’t his thing”, saying, “I know law is really important for a stable society, but it just didn’t fly for me, and I think I would have been miserable if I had continued with it.

“For me, education is the most important game in town and schools are where it happens. It is passing the baton from generation to generation, and the idea that each generation is going to make something new, do something exiting and go further than any previous one.”

Just as crucial to his engagement with the college’s students is Michael’s relationships with their parents. He introduced a Friday breakfast to be shared with just eight parents every week.

The more intimate gathering gave him the chance to meet with them more personally and casually rather than just dealing with the “squeaky wheels” or those just trying to “get into your face”. While choosing them alphabetically, there was a twist. “I started with ‘Z’ and worked our way up,” he laughs. “The Zappacosta and Zoud families thought it was fantastic, because that end of the alphabet is never first. “In one great session I was telling the parents how the kids would always argue why mobile phones are so important, while they thought mobiles were the worst thing. After we finished the breakfast I invited them into a classroom to take the discussion about mobile phones and social media to the kids. It was interesting putting them together. The parents won hands down.”

Michael says he doesn’t have a favourite age among his students, enjoying different things at different ages. He finds kindergarteners funny and full of energy, while Year 7 is an interesting bunch finding their way in their first year of high school.

“They’re enjoying their last gasp of childhood; they’re still children, but old enough to be able to have a really good conversation with you,” he reflects. “Then in Year 11 and 12, it’s great watching them emerge as young adults and wanting to be treated as adults.”

You can find Michael having his own conversations with his boys over lunch discussing the school magazine, in the playground or perhaps on the sporting fields.

He’s confident he knows about two-thirds of the boys’ names and asked whether he ever shares some cautionary wisdom, a quote from Martin Luther King Jr springs to mind: “The line, ‘The arc of the moral universe is long, but it bends towards justice.’

If the kids see things getting worse or can’t make sense of why people do something, they have to look at the big picture to realise things will get better. “Put your phone down is the other advice I’d give,” he laughs. “There you go, ‘The arc of the moral universe is long’ or ‘Put your phone down’. Whichever.”