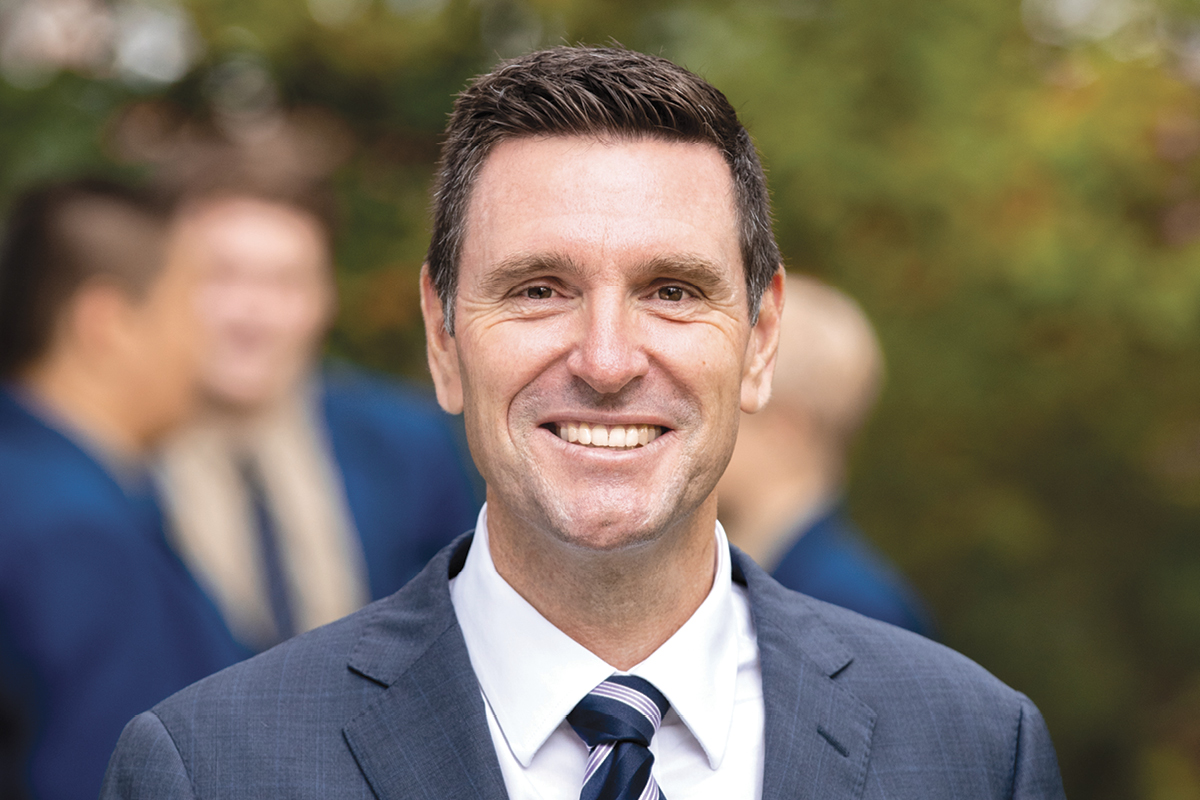 It’s just as well that a couple of impressive high school teachers ignited a passion in Scott James to pursue a career in education. Particularly after his dream to shine in tennis was smashed, literally, thanks to a certain Australian doubles champion. It was a damaging blow to the ego and one the Headmaster of Sydney’s Knox Grammar has never forgotten.

“My claim to fame was being wiped off the court by Todd Woodbridge,” he laughs. “I’m guessing it was the quickest game in history for him and certainly put an end to my tennis career. It made me realise I was nowhere near the standard I needed to be and it taught me how to fail.”

Another unforgettable experience, albeit with a more positive outcome, was at De La Salle College, when two teachers walked into his classroom and triggered a thirst for knowledge. Despite the fact they taught subjects poles apart, Modern History and Biology, for Scott it was all about the teaching.

“Yes, two entirely different subjects with nothing in common. But it’s all about the quality of the teacher in front of you, their passion, their deep love for the subjects and their ability to build rapport. Those teachers generated my love for learning.”

Scott went on to study exercise science and human movement, gaining a graduate diploma in secondary education and a master’s in educational leadership. For the past 25 years he has shared his quest for learning with thousands of students in New South Wales schools, including Methodist Ladies’ College (now MLC) and Illawarra Grammar School.

He was appointed head of Knox in April last year after serving as deputy for nearly a decade. He’d arrived at the school in Wahroonga on Sydney’s North Shore from The King’s School in Sydney’s west at Parramatta where he was head of Personal Development, Health and Physical Education. He remembers it was at King’s where he received some invaluable advice.

“It was from a mentor who told me to get out of the office and celebrate success. He said schools were relational, which meant engaging with staff and students, and getting among them. He also said celebrating success reinforces the motivation that carries you through to the next achievement.”

Knox, an independent day and boarding school for boys founded by the Presbyterian Church in 1924, was named after Scottish minister and theologian John Knox. Today, it is responsible for the education of 3,000 boys from pre-kindergarten to Year 12, with 210 boarders from rural Australia and overseas. Knox also operates Wahroonga Prep co-ed school, which has 250 students from PK to Year 6.

“We’re proud to say we’ve established a strong community – past, present and future – with overseas families, predominantly from China and Hong Kong,” Scott says. “I’m really supportive because it’s a reflection of society. The world is interconnected and full of diversity, and we want our boys to experience that.” 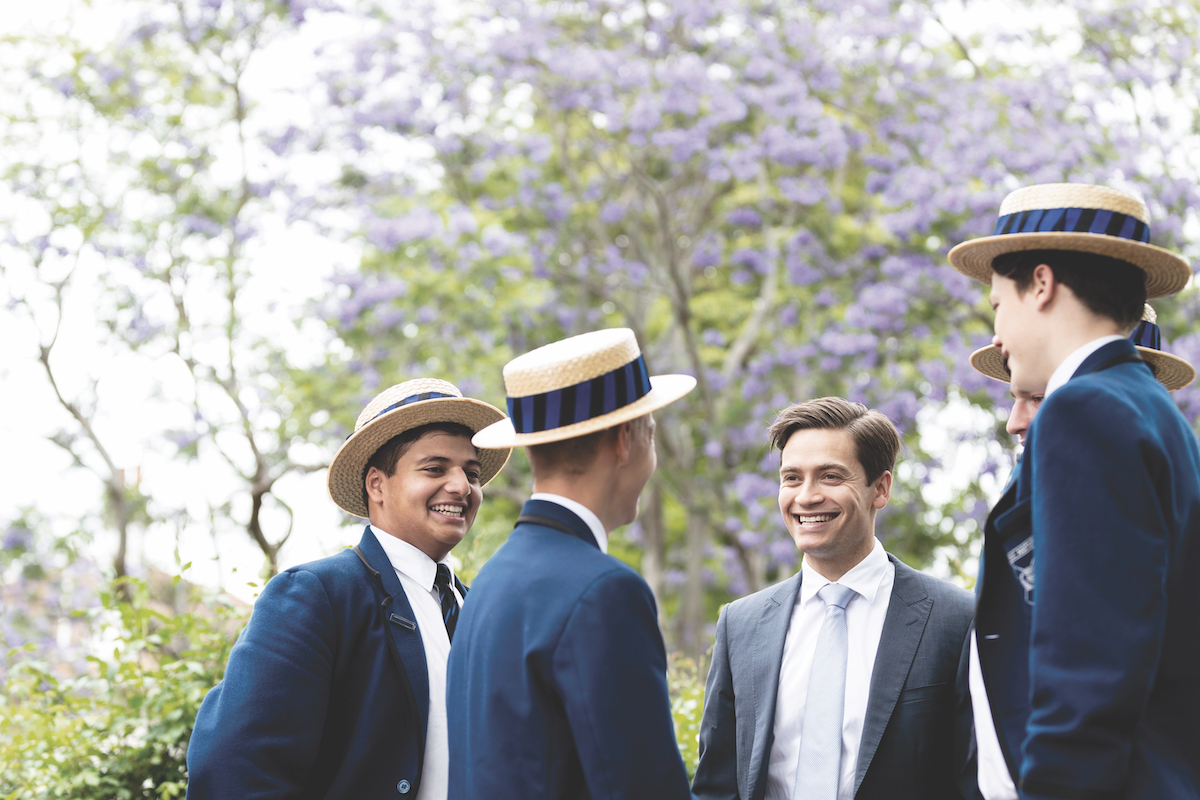 Diversity among Scott’s staff is also a priority. He recognises the valuable insights that female teachers offer – after all, he’s married to one – and among his 316 staff, 181 are women. It’s a ratio unheard of decades ago, when most teaching staff were addressed as ‘Sir’, not ‘Ma’am’.

“First and foremost, I employ a teacher on their merit, not their gender,” he says. “All our female teachers are very, very strong in their knowledge of their subject, while their ability to build relationships with the boys is outstanding.”

Scott says the female teachers have also assisted in the partnerships with neighbouring girls’ schools, including Ravenswood, Abbotsleigh and Pymble Ladies’ College, who participate in Knox’s performing arts, social justice and cadet programs.

“Our founding headmaster, Neil MacNeil, was a professional soldier, awarded the medal for conspicuous gallantry, so cadets have been integral to the fabric of Knox,” Scott explains. “Now we have a combined Knox–Ravenswood cadet unit of more than 1,000 cadets, around 300 of whom are Ravenswood girls.

“We also have a number of different immersion experiences from a social justice perspective. We conduct the Abbox camp with Abbotsleigh where students train as carers for children with physical and mental challenges before hosting a four-day holiday camp with them. It’s a phenomenally meaningful educational experience.”

As the father of two boys, both at university, and leading the lives of 3,000 others while remembering his experience of teaching girls, the question had to be asked: who is more difficult to teach?

“That’s not to say girls are not all those things as well but, and I can say this because I’m male, boys are simple creatures. They don’t have many layers. You earn their respect by showing an interest in who they are and once you do that, you have them for life. It’s very, very simple.”

Scott believes that modelling appropriate adult behaviour is more vital than ever for success in leadership roles, particularly in classrooms where learning is far more interactive and teachers are often tested more than their students. “What am I looking for in a teacher? A passion for lifelong learning,” he says.

“Teachers have to recognise they’re on a journey themselves and learning never stops.”

“We train our teachers and build their capacity as educators. At the end of Year 12 we conduct independent exit surveys with our parents and students and the top reason parents include for choosing Knox is our reputation for quality teaching. That is the main driver for choice. That doesn’t change, because we invest in our teachers.”

Investment is also made in Knox parents. After all, without their support the school would not enjoy its considerable facilities, such as aquatic, music and business centres flanked by sprawling playing fields and cutting-edge classrooms. It’s a fine line between appreciating their substantial contribution and running interference when overzealous helicopter parents feel compelled to meddle.

“I don’t want it to sound like we’ve achieved nirvana here, but one of our great strengths is the partnership we have with parents,” Scott says. “We take them with us on the educational journey of their sons. 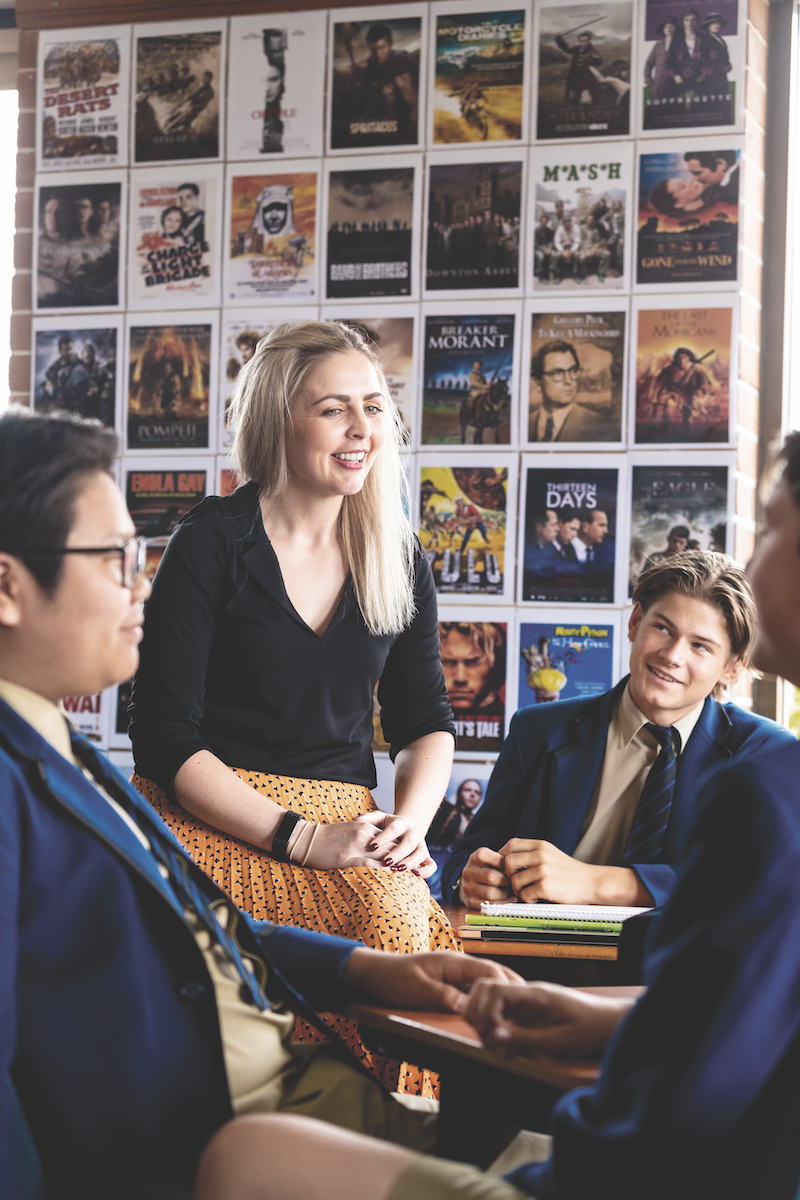 “We openly communicate with them when we host breakfast events, parent forums or when we’re tracking their sons. Sure, we have to moderate their expectations at times, but we do it in a way that is positive and respectful. Parents understand that building relationships in this mutual climate of respect only benefits their boys.”

While the school motto, Virile Agitur, may mean ‘the manly thing is being done’, the scope of the boys’ education has been widened to include emotional and spiritual support. Knox Total Fitness, an initiative of Scott’s, is encompassed in the school’s Positive Education program. With the involvement of careers advisers, chaplains, staff, councillors and team leaders, it provides a holistic approach to social, physical, spiritual and academic fitness.

“We use the word fitness because it’s a robust term that resonates with boys,” Scott explains. “The bottom line is, it’s giving boys the disposition and skills to reframe setbacks and move forward. It’s important to know how to deal with setbacks and be able to navigate them and build resilience to leverage off their strengths. In an all-boys school they can be themselves and know that they can fail in a safe and secure environment. It’s critical for them to learn how to fail and get beyond it.

“All our staff are trained in positive psychology and positive education by qualified psychologists from the Positive Psychology Institute. We’ve invested in the program significantly, offering two intakes a year that include online training, masterclasses and face-to-face sessions with staff, as well as a practising certificate for wellbeing in education.”

Scott is only the eighth head to lead Knox in its near-100-year history, an honour he attributes to the school’s council, past and present, and its meticulous scrutiny of applicants vying for the top job over the past 96 years.

“Credit has to be given to the council because it has successfully appointed the right head with the appropriate skill set suited to each particular time in Knox’s history,” Scott reflects.

“I don’t want to sound like we’ve achieved nirvana here, but one of our great strengths is the partnership we have with parents.”

“Independent schools like Knox are unique communities; we need time to build relationships with the community, time to build connections. Successful transformation requires stability and a rapid turnover of leadership has the potential to affect a school’s performance.”

It was the council Scott turned to last year when he wanted to introduce an addition to the school’s four values – Faith, Wisdom, Integrity and Compassion. After much discussion and feedback from old boys, Courage became the fifth core value. “It was a big moment because it’s not just something you randomly do,” Scott explains.

“Courage means to keep alert, serve others, stand firm in your faith and be strong. We need courageous boys and our boys love hearing the stories of courage already built into the school.”

Infusing his boys with courage is just a fraction of the vision Scott sees for the overall development of the young men he is helping to raise. He wants problem solvers, team players, and critical and creative thinkers added to the mix. “Innovation wrapped in tradition,” he reflects.

“You look at a boy when he arrives at Knox, wearing his blazer and boater, but inside he’s carrying a bag with a laptop. Or, look at our Scottish baronial architecture, but peek inside and you’ll find advanced technology and flexible learning spaces.”

With fourth-generation Knox boys attending now, tradition is deeply embedded, if not fiercely protected. Boys wear the MacPherson tartan in honour of the founders’ Scottish ancestry, and cadets salute the school gates when they enter in uniform. Boaters are doffed to motorists at pedestrian crossings and while passing through the school’s Fitzhardinge Memorial Gate, erected in 1933 in memory of a student.

“It’s a show of respect,” Scott says. “We want our community to feel valued and appreciated, and people want to belong to this type of environment, one based on authentic relationships. It’s wonderful to be the gatekeeper of all this tradition and history.” 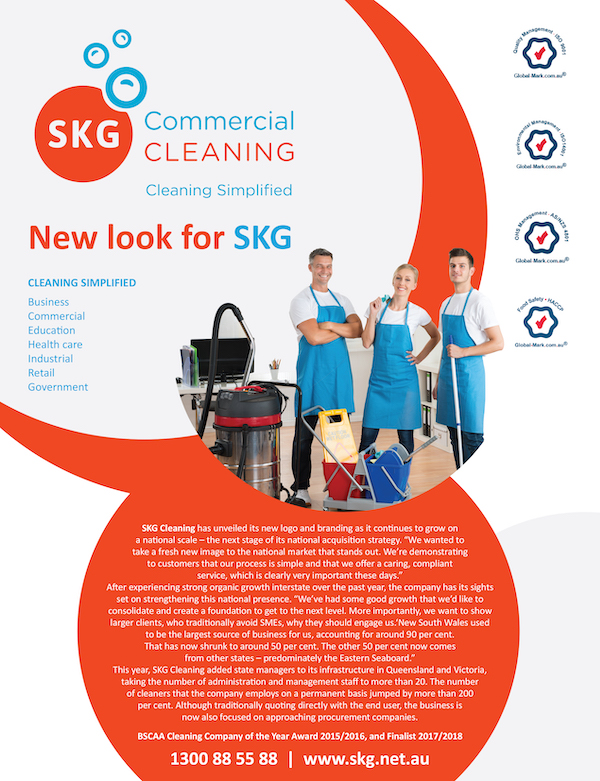 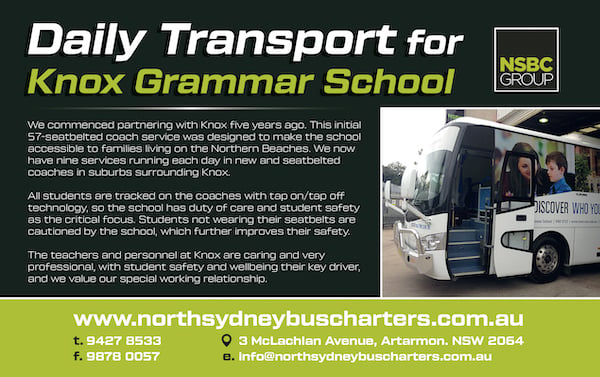 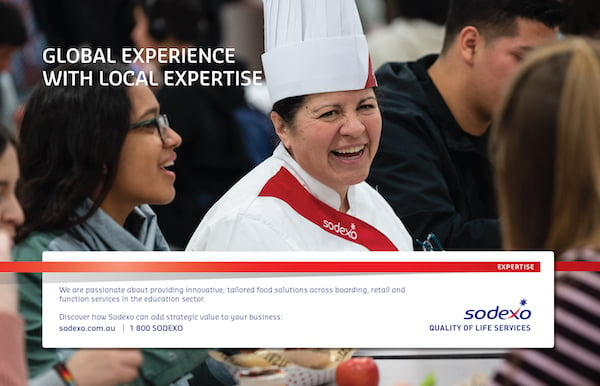