There was a buzz of excitement in the air in the small southern New South Wales town of Adaminaby on 17 October 1949. It was a bright, sunny day and the locals had gathered to watch Sir William McKell, the Governor-General of Australia, press the button to fire the first blast on the Snowy Mountains Scheme, marking the official opening of the project.

At the time, Prime Minister Ben Chifley described the scheme as “the greatest single project in our history”. And he was not wrong. When the mammoth project was completed in 1974, it consisted of seven power stations, 16 major dams, 145 kilometres of interconnected tunnels, 80 kilometres of aqueducts and 2,000 kilometres of road.

Set high in Australia’s Alps, the Snowy Mountains Scheme was designed to generate hydroelectricity, as well as support agricultural production, town water supply and irrigation. Today, it remains one of the most complex integrated water and hydroelectric power schemes in the world. In 2017, it was recognised by the National Museum of Australia as a Defining Moment in Australian History, yet it was also a defining moment in the history of engineering firm SMEC.

“The Snowy Mountains Scheme is our namesake project. It’s considered to be one of the engineering wonders of the modern world, and we’re so incredibly proud to have been involved in developing and building it,” SMEC ANZ CEO James Phillis says. “The project started in 1949 and that marks the foundation of our organisation. It’s part of our heritage. The scheme still provides 32 per cent of all renewable energy to the eastern mainland grid of Australia.”

An estimated 100,000 people from more than 30 different countries worked together in extreme conditions to build the scheme. The majority of these workers were migrants, who travelled to Australia after World War II in search of a new life.

“The grit, determination and resilience of those early pioneers is built into our DNA at SMEC. We’re still engineering and designing solutions to really complex problems, and that experience has shaped our ability to do that,” James explains.

“Our people are incredibly inspired by the scheme and the additional impact we create through the SMEC Foundation and our CSR programs. We are incredibly proud that the SMEC Foundation was recently awarded the ABA100 Winner for Community Contribution in the 2019 Australian Business Awards. We also continue to celebrate diversity within our workforce. We have 70 different nationalities working in our business worldwide.”

SMEC has gone on to work on a huge range of engineering projects around the world; however, James believes its name will always be synonymous with the Snowy Mountains Scheme. “That legacy has been built up over 70 years, and we’re still providing the same expertise and technology-driven solutions in other areas of infrastructure and urban development,” he says. “We’re also leaders in other areas of renewable energy, such as solar and wind, and we’re heavily involved in other energy and sustainability projects across Australia as well.”

In 2017, SMEC was engaged by Snowy Hydro to work on Snowy 2.0, which will significantly expand the scheme to meet Australia’s future energy needs. James says the SMEC team is thrilled to be working on the project. “The day Snowy Hydro told us that we had won, we held a morning tea in our Sydney office and we absolutely packed out our cafe,” he recalls.

James has worked at SMEC for the past five years and stepped into the ANZ CEO role just over a year ago. While the SMEC team are immensely proud of the company’s heritage, James says they are also incredibly focused and passionate about what they can achieve in the future.

“I want to take our legacy and expand that approach to grow our business and deliver excellence to our clients. I hope we can continue to make a positive impact on the lives of everyday Australians. For instance, the Sydney Metro Northwest recently opened and features a unique ‘sky train’ curved cable-stayed rail bridge.

“I hope we can continue to make a positive impact on the lives of everyday Australians.”

This is the first of its kind in Australia and last year it was the only project to win both the overall 2018 Project of the Year (global) and the 2018 Global Best Rail Project at the prestigious Engineering News-Record Awards. It’s a great example of an innovative and technically complex project we’ve worked on that’s significantly improving people’s lives,” he enthuses.

“So, while we’re celebrating where we are now, we’re looking to strategically grow that in the next 70 years. We’re going to continue to focus on advanced engineering, service delivery and providing value orientated solutions for our clients, ensuring that we connect our best expertise and continue to build genuinely sustainable communities. We’re now part of Surbana Jurong Group and we subscribe to the group’s purpose statement, which is ‘Building cities, shaping lives’. A lot of what we’re doing now is really focused on that philosophy.” 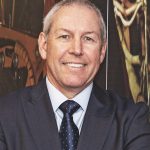