Jürgen Böhler, CEO of thyssenkrupp Elevator China, knew early on that his professional future lay somewhere in Asia. “It all started when I went to university,” he recalls.

“I started off studying in Germany, and decided I’d like to spend a little time abroad. I went to the UK and spent a year doing a second degree, then went to France to do another degree. After spending time in three countries, at three different universities, it became clear to me that I would like to see the rest of the globe – particularly the countries in Asia.” When he began his job search, the number one criterion was that his potential employer would offer, at the very least, a training program in the Asian region. Elevator company thyssenkrupp fit the bill.

“When they hired me, thyssenkrupp told me that after a few months of initial training, they would send me to either South-East Asia or China. In the end, it was China. I was scheduled to go for one month, but I never came back.” This occurred more than 20 years ago, in 1995, at a moment when the country’s elevator market was beginning to show its remarkable growth potential. The market has since become the biggest in the world, and Jürgen’s career has progressed nicely alongside it.

Joining thyssenkrupp at the beginning of his career meant he learned the ropes in a range of departments, including production, procurement, quality, sales, and branch and regional management – an opportunity for which he is grateful. “I could carry out these steps of my career development in a fast-growing market, and that was exciting,” he says.

Upon his initial arrival in China, language was a significant barrier that needed to be overcome, and Jürgen identifies this as a problem that CEOs in foreign countries must tackle as soon as they can. “From the beginning, I knew that language was an incredibly important tool for my job. Information is the key: if you’re not able to understand and communicate, then you’re not able to understand business. Without language,” he maintains,“I don’t think you can be very efficient.”

Bound up in Jürgen’s views on the importance of being able to speak the local language is an acknowledgment of the value placed on relationships, of both a personal and a professional nature, with Asian cultures. His efforts were driven by an understanding that, “at the end of the day, we must keep in mind that we’re here to serve the Chinese customers. They don’t care what language I speak, but we have to fulfil customer needs and for this, the best tool is still Chinese.”

The elevator business is highly specialised, and translators are unlikely to possess the requisite technical knowledge to be able to precisely communicate what needs to be understood. In order to acquire higher customer satisfaction, local language is a necessary tool.

Having long ago solved this problem, Jürgen’s focus now is on honing thyssenkrupp’s competitive edge. “These days, the Chinese customer is very sophisticated; in the Chinese market, requirements for elevator uptimes, life performance and delivery time are the most demanding in the world.”

“Normally, there is only one elevator car moving up and down in a shaft that is 300 or 400 metres high. What a waste.”

To remain a market leader, it is vital that thyssenkrupp stays ahead of the technological curve, and a series of innovative products is aiding it to do so. The company’s TWIN elevator system is the only one in the market that incorporates two cars, moving independently of each other, within a single shaft. “Normally,” Jürgen explains, “there is only one elevator car moving up and down in a shaft that is 300 or 400 metres high. What a waste.” The benefits of the TWIN system are realised in the form of lower cost, increased traffic handling, and a reduction in energy consumption, but what Jürgen particularly celebrates is the more efficient use of space the system gives rise to.

The company has also designed the world’s first elevator system that doesn’t rely on ropes. The MULTI elevator offers both vertical and horizontal movements, and apart from the possibilities represented by horizontal mobility, the brilliance of the development also lies in the fact that every car is independently powered, and many of them can utilise a single shaft. The company is leading the way, too, in predictive maintenance capabilities, with its MAX system – the first in the industry to provide a real-time, cloud-based solution.

“We retrieve data from our elevators and work with Microsoft to analyse it and form a predictive maintenance schedule,” Jürgen says. “We can also predict the end life of our components, so we know when to change or repair them before a breakdown.” The system results in a reduction of downtime of up to 50%.

Reinforcing its commitment to R&D in China, thyssenkrupp opened a test tower in Zhongshan City, Guangdong Province, in March 2018. The 31-floor structure, standing at a height of 248 metres, is one of the highest test towers in the world, and serviced by 13 shafts. It incorporates an active mass damper system that simulates earthquakes and typhoons. This allows engineers to assess what happens to cabs, travelling cables, rails, and guide rail clips in the event of a natural disaster.

It’s another way that thyssenkrupp is leading the charge, and Jürgen points out that there aren’t many of these facilities available in the world. “Our investment in this kind of infrastructure and these tools excites our engineers.” Since thyssenkrupp’s establishment, creativity has been the gene of this German company. No doubt, the state-of-the-art test tower will encourage the company’s engineers to be more engaged in their R&D work. They are not only provided with advanced infrastructure and tools, but also the opportunities of exchange programs. The foreign engineers come to China and the Asian engineers go overseas to attend international projects. The strong link inside the company’s R&D community enables continuous and limitless creativity.

As a typical German business leader, Jürgen always bears details in his mind. “Our products have to be absolutely safe and reliable, which comes from relentless effort to perfect the details of the products,” he says. “Besides, we are not only a company interested in standard elevators that go up and down.” He reveals that his individual motivation stems from knowing he’s actively making a difference.

“Money is a poor motivator; if money is your only motivation, you will not be able to succeed. Your job has to be your passion, and something you truly love to do. For me, my job is also my hobby. I like to see how the company is growing, and customers becoming happier with our services and products. Customer satisfaction is not only our biggest motivation to forge ahead, but also our only key to winning the new space race.” 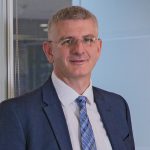