Delek Drilling CEO Yossi Abu recently celebrated his 40th birthday. That may not be the most remarkable feat on its own, but when you consider that he has more than seven years in the CEO role under his belt – he was promoted from Vice President in 2011 – and realise he was 32 when he took the position, it becomes rather more significant. “It was quite an achievement for me,” he says with characteristic humility. “I was the youngest CEO of the top 100 companies rated on the Tel Aviv Stock Exchange. We were one of the top 10 companies,”

Delek is a market leader in the exploration and production of natural gas in Israel. When Yossi took the CEO role, the company was facing an immense challenge: to develop the Tamar project, a US$4 billion undertaking carried out in a changing regulatory environment. Initial exploration attempts took place in 2008, and the probability of finding gas was only 30%. After the discovery of the Tamar gas field in 2009, Delek successfully convinced investors, such as JP Morgan and Citi, to finance the project. Four years later, the reservoir began providing natural gas to the Israeli market.

The Tamar venture uses some of the world’s most advanced technologies available on the Israeli market, as does the current Leviathan project. Yossi played an integral role in the financing of the Leviathan development, raising about US$1.75 billion from HSBC and JP Morgan and securing the export deals that enable the production to go ahead. Due for completion at the end of 2019, Leviathan is twice the size of Tamar and, as with Tamar, will allow the company to provide a meaningful energy source to countries in the region while building economic ties and bridges that will better people’s lives.

The output from the Tamar reservoir yields more than 60% of Israel’s electricity, and customers include the Israel Electric Corporation, industrial facilities, and private power plants. “From an energy perspective, we need Israel to be independent,” Yossi says.

“Ours is a brand of creativity that involves creating while also being pragmatic.”

According to him, the company has ‘can-do’ DNA running through it, an inheritance from Israeli entrepreneur Yitzhak Tshuva, who oversaw its expansion in the late 1990s and early 2000s. Yossi believes three elements make Delek unique. “First, we have a great team with a huge passion and a strong belief in what we are doing,” he says. “The second is flexibility. We are small and this allows us to work in a fast and agile way. The third is creativity; ours is a brand of creativity that involves creating while also being pragmatic.” Much of the company’s success is thanks to its partnership with Noble Energy. Yossi refers to the Tamar project as the crowning achievement of this partnership – one that dates back 20 years. “Noble is an amazing company in the world of engineering,” he says. “Our experience in the commercial and the regulatory world has allowed us to create an incredibly strong and complementary partnership. The synergy between Delek and Noble is one of the foundations of our success.” Yossi also recognises the contribution of Delek Drilling’s clients, who create the demand for natural gas in the region.

The company’s vision for the future is to duplicate its success on a global scale, says Yossi. He makes clear, though, that commercial interests are not the only factors driving the company. “We are nesting natural resources to create economic ties between countries in the region; this is bettering the lives of the people who live here, and it gives us a lot of pride in our work and a drive to continue.” He describes how he is leading the Israeli gas sale negotiations with its neighbouring countries such as Egypt, Jordan and Cyprus. This is no mean feat, with major deals being brokered that will have great geopolitical effect on the economies of all nations involved. 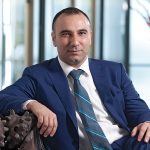