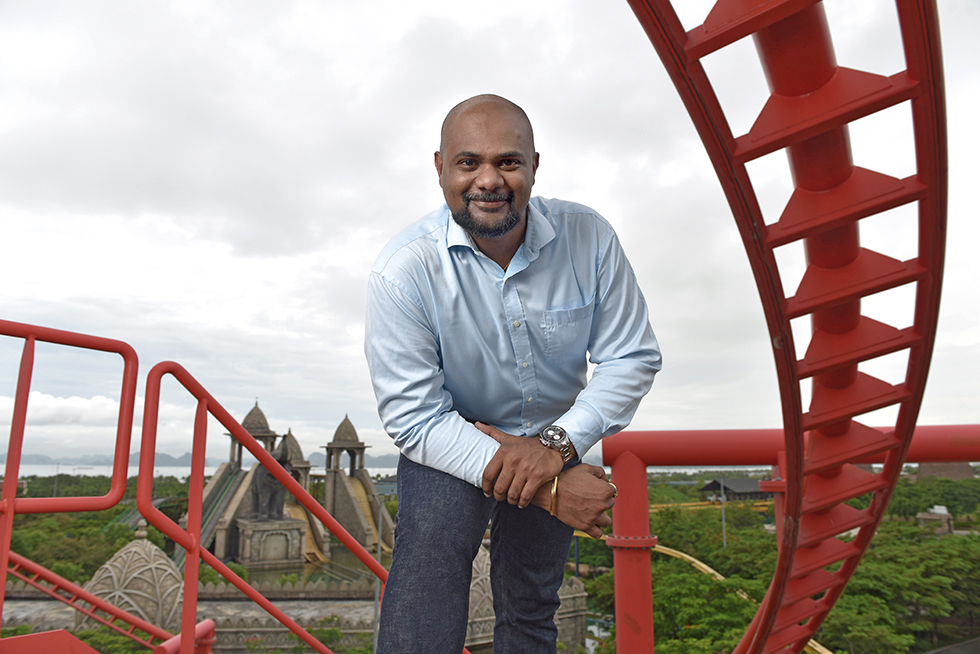 Sreetheran Karunanithy laughs a lot. Even when he’s thrown a catastrophic curve ball and there’s seemingly little to be amused about, the Sun World executive can still muster up a chuckle to lift the spirits of everyone surrounding him.

And a smile or two is exactly what was needed during 2020 as COVID-19 forced Vietnam’s largest theme park, the Sun World Halong Complex, into closure or restricted hours. In fact, Sree, as he’s fondly known throughout the amusement park industry, was just weeks into his new job of managing the maintenance of the park’s rides and facilities when it was first shut down in March.

“Yes, everybody keeps telling me my timing was off,” he laughs. “Right off.” As Vice Director of Technical and Facilities Management, Sree explains he’s “basically” responsible for making sure the rides and facilities sprawled across the 214-hectare amusement park are safe and working.

Not so basic at all really, considering his vital attention to detail can literally mean life or death to hundreds of thousands of thrillseekers. Sree agrees his 11 months at Sun World Halong have proven to be more of a roller-coaster ride than the amusement park’s infamous Dragon’s Run. It first shut down in March, reopening on 8 May with just 15 guests trickling through the gates.

However, as Vietnam earned an enviable reputation for containing the virus and government regulations eased, people began to return in droves, with crowds of up to 30,000 visiting on weekends. Then the second wave of the virus hit and numbers dropped again, forcing the park to shut during the week and remain open only for weekend trade.

In August, it closed completely again, before reopening on weekends from late September. The park plans to operate seven days a week from December to cater to school holiday crowds. However, it was Sree’s decade-long experience working at other amusement parks which encouraged him to ride the ups and downs at Halong.

He’s worked with Resorts World Genting in Malaysia; Trimoo in Qatar; and IMG Worlds of Adventure in Dubai. Prior to joining Sun World Halong in January, he was Technical Manager at Dubai’s Global Village, a multicultural festival park.

After five years in the Middle East and having grown up in Malaysia, Sree admits he was yearning to get back to the “green” of Asia. “I missed the jungle, the green environment and I missed the rain,” he reflects.

“So when a headhunter called me about the position in Vietnam, it was an opportunity to return closer to home. I also thought it would be a good challenge working at a coastal park not far from the beach because dealing with seawater and corrosion offered new challenges.”

Sun World Halong Complex is split into two main areas connected across the sea by cable car. The Coastal Amusement Park on Bai Chay Beach incorporates Dragon Park featuring extreme rides such as the Lightning Dragon and the Furious Rhino, and more gentle rides on the Royal Carousel and The Fairy Train.

Meanwhile, Typhoon Water Park features the tranquillity of a swimming pool or river float, or the thrill of slides or wave pools. A two-kilometre cable car ride takes you to the Ba Deo Amusement Park for the Zen Garden, indoor game zone The Mysterious Castle and the spectacular Sun Wheel.

Sree hit the ground running when he arrived in Vietnam just a week before 50,000 people flooded through the gates to celebrate Tet, the Vietnamese Lunar New Year, between 23–29 January. “It was crazy,” he remembers.

Seeing people having fun is one of the most amazing things. I just love to walk around to see the smiles on people’s faces. It makes my day.

“So many people in the park, so much noise, so much fun.” Just six weeks after Tet, when the Vietnamese government issued the order for the country to go into COVID-19 lockdown on 9 March, Sree was looking over the sprawling expanse of his very silent amusement park in shock, contemplating the plans he’d already made.

“Getting my head around the closure was really difficult,” he admits. “We didn’t know how long the park would be closed. A month? Two months? Three? But life has to go on, so immediately I began thinking about how to preserve this asset, save all these rides in this tropical country where you have rain, typhoons and sea air because, if a machine is not running for a while, you face all sorts of problems. All hell breaks loose.

“Our priority was to preserve the rides and I also had to preserve my staff, from the managers to my technicians and crew. Management were starting to lay off people. But I needed to keep my staff, not just to ensure the rides were kept operational, but from a humanitarian sense. People couldn’t afford to lose their jobs.” 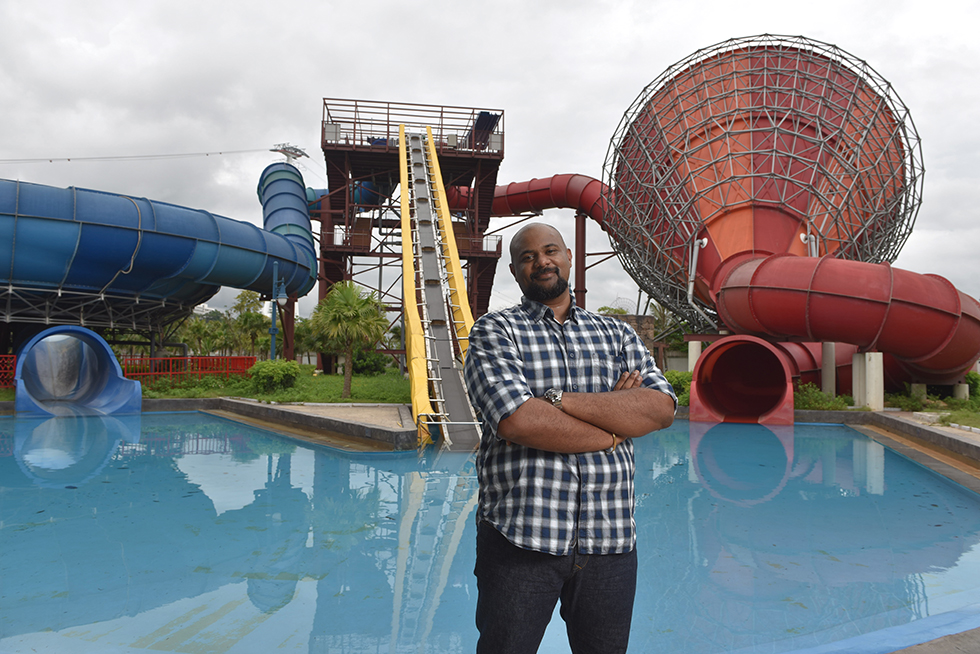 It took two weeks to earn management’s trust and persuade them that staff would be needed to ensure the rides and facilities would be operational for the influx of visitors expected when the parks eventually reopened.

Sree not only managed to keep every one of his 160 team members, he kept them very busy. “We brought forward all the annual maintenance schedules for the second half of the year,” he explains.

“Because we are usually open 365 days a year, a ride is closed down for a week for overhaul, so it was an opportune time to get everything up to date. “Also, with the park more than three years old, a lot of facilities needed repairing or painting. We made everything look like new and could do it without closing any sections.”

While technicians are needed to hop on board rides to listen for irregular sounds and feel for any unusual jolts or rough spots, Sree admits he’s not adverse to checking them out himself, not just to ensure everything is operating as it should, but also to appreciate the thrill his customers expect. That means road-testing rides in other global amusement parks. He laughs as he recounts the sheer terror he felt when hurtling more than 1.3 kilometres along Germany’s infamous Colossos wooden roller-coaster in Soltau’s Heide Park.

“I needed to ride on this, but the moment I rode on it, I knew it was the first and last time. I’m never going to get on it again,” Sree chuckles. “It’s true, age catches up with us and our risk tolerance is not so high anymore. Drop towers and high-level rides do scare me a little bit now, but that’s the job. You have to do it.”

There’s no doubt 2020 has proven to be a tough reality for a man who admits to “always laughing”. But for Sree, happiness is contagious and something to be spread not only among all the visitors to the park, but also to the team he fought so hard to keep.

“When you see happy people, you become happy and our theme park is basically a happiness factory,” he says. “People come to our park to have fun and the moment they enter, their troubles are eased. “Seeing people having fun is one of the most amazing things. I just love to walk around to see the smiles on people’s faces. It makes my day.” 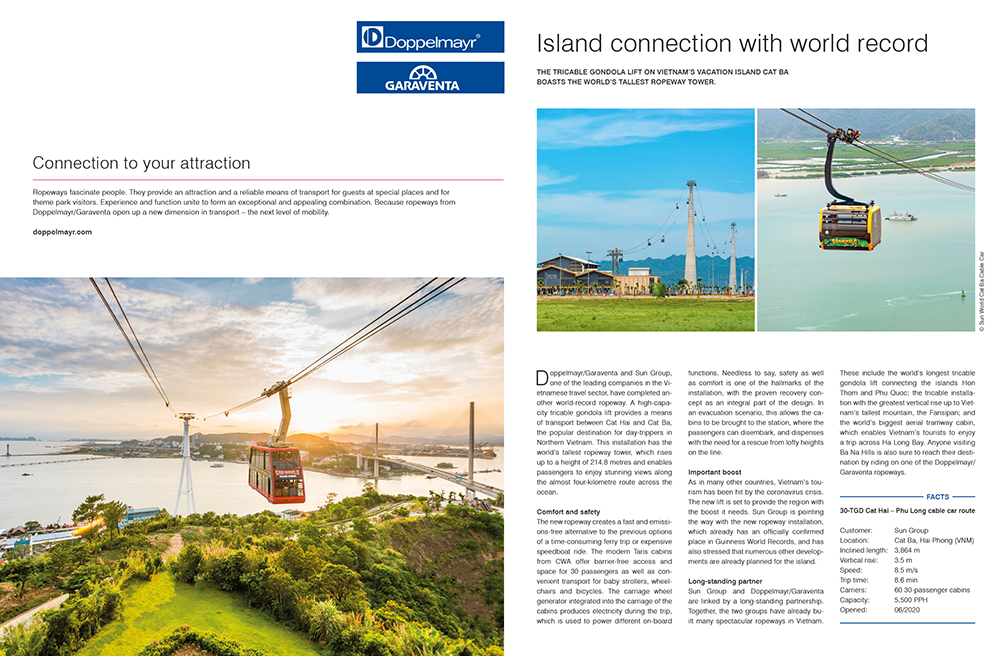