There are many experiences that shape a person’s career. For Westpac Chief Executive, Consumer Bank, George Frazis, serving nine years with the Royal Australian Air Force was one such tenure that has significantly impacted upon his professional journey. He recalls being the engineer at No. 77 Squadron when the Mirage fighter aircraft was being replaced with the F/A-18 – a jet that was leading the way when it came to global technology.

“There’s no doubt that experience has had a lasting impression on me and an ongoing impact on my career,” he says. “I was in the squadron for about six months and when I had my first assessment with my commanding officer I got an average rating. I was a little surprised because it wasn’t something I was used to and, rather annoyed, I asked him, ‘Why?’ “He said, ‘Look, you’re doing a great job. The troops like you, the aircraft are well maintained, you’re getting on with your pilots and you’re running a slick operation – but what have you changed? If you leave tomorrow, what will people say you created?’”

This comment struck a chord with George and has guided his leadership ever since. Every six months, he makes a point to look back and think, “What have I actually transformed in the role I’m currently doing?” As the head of Westpac’s Consumer Bank since 2015, George has been able to stay true to that advice he was given all those years ago – the brand is committed to being at the forefront of innovation, which is an area he also wants to make a difference in.

He explains that Westpac’s St.George Bank was the first in the country (and the second globally) to introduce internet banking, while Westpac also led the way globally when it came to fingerprint login technology.

“If you leave tomorrow, what will people say you created?”

Then there’s the progress the organisation has made in mobility, allowing customers to access services whenever and however they like, and in data, analytics and artificial intelligence. “I’m proud that we’re one of the leading consumer banks in this country,” George says. “We serve more than nine million customers and we really make a difference to their lives. We have two main aims: being there for our customers for the moments that matter; and helping our customers meet financial objectives and fulfill their dreams. Innovation is how we stay ahead.”

A second area that George wants to make an impact in is one that’s close to his heart – veterans’ employment. It’s something that’s valued by Westpac as an organisation too. “We want to provide meaningful, long-term careers for our veterans,” he explains. “There are about 5,500 veterans leaving the defence force each year, and the unemployment rate is higher than our national average. These are men and women who have absolutely made sacrifices to defend our way of life.”

As part of the Westpac veterans’ employment initiative, there are a few focus areas: looking at practical ways to help businesses benefit from the skills and experiences veterans possess; developing the required partnerships between government, business and the defence force; and making a real difference not only to the employment of veterans, but also to their families. He adds that former military staff have a lot they can offer an organisation.

“If we put to one side the technical and project management skills, every defence member gets exceptional leadership training. They also know how to work in cross-functional teams in an agile manner and are extremely resilient. They work hard and understand how to deliver on a mission and be motivated by a higher purpose.”

Further supporting this stance on employment of veterans is Westpac’s sponsorship of the Invictus Games Sydney 2018. “It’s a great initiative. Sport is a fantastic way to heal and create awareness of what veterans are going through,” he notes. George also chairs the Prime Minister’s Advisory Committee on Veterans’ Employment, a place where he can participate in actioning nationwide change.

A piece of advice passed on

For George, success is defined by that powerful piece of advice he was given while serving in the military in those early days of his career – what difference have you made? And as the head of Westpac’s Consumer Bank, he has the opportunity to deliver on this, with the Westpac team, for the betterment of the lives of his customers, colleagues and fellow servicemen and women.

So, every six months, he will continue to commit to looking back on what he’s achieved, before turning his vision to the future and to how he can further improve on the work that Westpac Consumer Bank is doing. 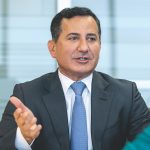