Out of Africa: James Mwangi 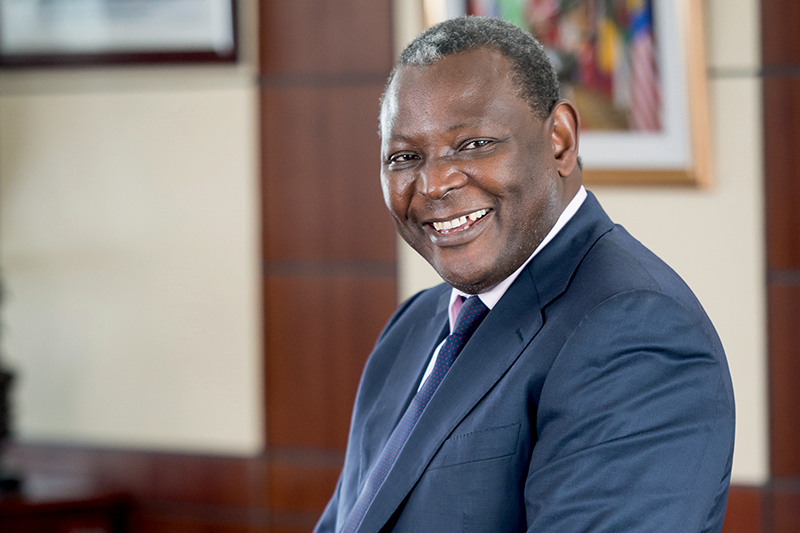 There is one thing James Mwangi is not afraid of and that is a challenge. The way he sees it, the bigger the challenge, the bigger the opportunity. So, when he took on the role of CEO at Equity in 2004, he wasn’t at all daunted by the mammoth task ahead.

“The bank was very challenged, and the environment was very challenging,” he recalls. “I saw a huge opportunity to reposition the bank in the marketplace. There were myriad hurdles to overcome, but I saw those as numerous chances to succeed, because success is overcoming challenges.”

Since he joined the company as Strategy and Finance Director in 1993, James has been responsible for helping grow the Kenyan financial institution from having a base of 12,000 customers to nearly 14 million customers.

In turn, he says the number of employees has grown from 17 to 7,500 and total assets have increased from €192,585 to more than €7.77 billion. But far more impressive is the impact Equity has had on society, by increasing financial inclusion in Kenya.

James says that in 1994, only 4% of the population had bank accounts, while today, that figure is 87%, with 60% of those customers holding accounts with Equity.

“It’s an inspirational African story of what we can do on the continent with an integrated approach when the capabilities and competencies of communities and society are brought to bear,” James says.

“What makes Equity stand out is that it’s more of a movement, which is why clients call themselves members, not customers. The essence and purpose of Equity is to catalyse socio-economic transformation of the continent by empowering the members to transform themselves using financial tools.”

According to The Banker magazine’s 2020 Top 1000 World Banks list, Equity ranked number 754 according to size. However, in terms of return on assets it ranked 20; for return on capital, 55; and in the financial soundness category, 62. It’s also the fastest growing bank in Africa.

However, financial inclusion is what really sets Equity apart from its competitors. “We are one of the most inclusive banks in the world and have recently worked to open accounts for refugees in camps.

We believe no-one should be left behind. Financial access is a necessity because our financial institutions are the mechanisms of resource allocations,” James shares. Part of the bank’s commitment to transforming the social and economic wellbeing of Africans was the formation of the Equity Group Foundation (EGF) in 2008. EGF delivers social development programs focused on six areas: education and leadership development, agriculture, entrepreneurship and financial education, energy and environment, and health.

“In the past five years, EGF has spent US$388 million (€350 million) on uplifting the community. The bank has funded secondary education for 26,304 orphans and 13,775 university scholars, with 633 attending or alumni of global universities, and 6,713 benefiting from paid internships,” James enthuses.

“Additionally, in the past 10 years we have helped 638,522 farmers transform their peasant farming into agribusinesses. That process stabilises the environment and makes everyone a winner.” Equity works closely with its suppliers to ensure there is shared prosperity.

Delegation inspires people because it gives them a challenge.

This is achieved by outsourcing key infrastructure and services such as telecommunications, IT, cleaning and security. “We believe we should create an integrated ecosystem with everybody within the value chain,” James says.

“I would say almost every facet of the bank speaks of integration with community and society.” The bank also highly values its team members and has implemented an employee share-ownership scheme. “The staff own 5% of the bank,” James reveals.

On the world stage

In 2012, James received Ernst & Young’s World Entrepreneur of the Year Award for his efforts in transforming Equity. That same year, he was also awarded Forbes Africa’s Person of the Year. In 2010, the Financial Times named him as one of the top 50 emerging market business leaders and in 2020, James received the Oslo Business for Peace Award.

“Essentially, this means when staff are serving members, they’re also serving themselves. When they’re creating wealth, they’re also creating wealth for themselves.” When it comes to managing his team, James likes to empower his staff by acting as a mentor. “Delegation inspires people because it gives them a challenge,” he points out.

“Saying that, I am always on hand and available to coach where capacity needs to be enhanced. My leadership is also objective-driven – it is sharply pointed at and focused on what needs to be done.”

One of those objectives is ensuring Equity remains innovative in the face of digitisation to allow it to respond to current and future customer needs. “Increasingly, we’re seeing banking converge with telecommunications – banks offering products and telecoms providing the infrastructure to deliver banking,” James explains.

“Financial services are becoming virtualised through platforms like mobiles. Essentially, the process is being redefined from a place you go to something you do on devices. It’s also becoming more driven by lifestyle. Payments and processes that enable lifestyle may be the definers of the industry in the future.”

While Equity has experienced phenomenal growth over the past 25 years, it’s showing no signs of slowing down. The bank currently operates in six countries, but the plan is to expand to 15 by 2024. “We’re becoming more of a financial services provider and not just banking,” James says.

“We have pilot-tested insurance and brokerage, and those services are becoming part of our offering. We’ll deepen the offering, then we’ll take more of a geographical approach. We’ll also increase our coverage using third-party infrastructure, so the presence of the bank is not defined by branches, but by our presence in merchant outlets, retail outlets, agent facilities and being available on all devices such as laptops and mobile phones.”