Jon Linehan, CEO of Defence Bank, has a strong background in financial services, previously working as CEO of a super fund as well as a general manager and a funds manager. “I was CEO of HOSTPLUS for five years, where I tripled it in size from $400 million to $1.2 billion funds under management. In a similar vein, I was general manager of Australian Unity Funds Management where I oversaw its greatest period of organic growth. When I first went there, its funds intake was $20 million per annum; when I left, it was $480 million per annum and had won a range of industry awards. I joined Defence Bank, which was then a credit union called Defcredit, seven years ago. Since then, we’ve been the fastest-growing mutual, tripling in size through organic growth.”

Australian Unity Funds Management was an important stepping stone before taking the CEO role at Defence Bank. “I had the privilege of working with Ian Ferris, who was then Managing Director of the group. Although I had spent time as CEO of HOSTPLUS, working at Australian Unity Funds Management really opened me up to a more diverse corporate sector, and how it operates. It was Ian, one of the heavyweights of the Australian funds management industry, who went out of his way to mentor me.” 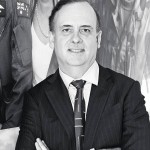