We have a 143-year legacy to uphold: Peter Lock

We have a 143-year legacy to uphold: Peter Lock 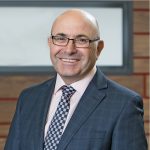 Heritage Bank CEO Peter Lock ‘stumbled’ into the banking industry. “I initially set out to work in the oil and gas industry. Growing up in Adelaide, I did a business degree part-time and majored in industrial relations – the area my father was in – on track to becoming an industrial advocate,” he explains. “I was at university when an interview session for the National Australia Bank (NAB) graduate program caught my eye – purely by chance. Without any intention of actually becoming a banker, I went in, had my interview and got the job.”

More than 30 years on, Peter has worked for some of Australia’s most prominent banking and finance organisations. He’s been the COO and Head of Corporate Banking for the Bank of Melbourne, the Managing Director Victoria for St. George Bank and the General Manager of Corporate Banking Victoria and Tasmania for Commonwealth Bank – not to mention running his own corporate advisory firm, Parkside Partners. Peter was inspired the moment he joined the industry. “I fell in love with it. In 1986, banks were quite different. There was a real sense of camaraderie and trust. Banks were the pillars of the community: people valued them, bank managers earned respect, and it was a life-long career with good prospects,” he recalls. “As a young person coming in, it was incredible to see lifetime bankers rising up the ranks and it showed all the possibilities I had ahead of me. Without a doubt, my time at St. George was most memorable. It was initially a Building Society and a challenger brand with a culture very different from those of the majors. It was very customer-focused, and it didn’t lose that ethos. That’s one of the reasons it was so attractive to Westpac.”

In November 2015, Peter was named CEO of Australia’s largest customer-owned bank, Heritage Bank. Established in 1875, Heritage prides itself on its independence – owned by customers, not shareholders. Instead of pursuing massive profits, its focus is on putting people first. “I was looking for opportunities outside banking when I heard about the job at Heritage. It had the same attributes I had enjoyed during my time at St. George and, as a mutual bank, I saw that it was a bank strongly rooted in the community.”

After he was offered the position of CEO, Peter says he found everything he was looking for in spades. “It’s a bank with a strong people focus that’s truly delivering on what the core of banking is – looking after clients, protecting their money, and helping them obtain better lives. That’s what banking is all about and I’m lucky to have found Heritage, one of the oldest financial institutions in the country.”

Any new CEO coming in expects to lift up a few things and find the odd black snake they weren’t expecting, notes Peter. But not in the case of Heritage, he adds. “What I was hoping for, and what my research showed, was a strongly performing bank – and that’s what I found. As opposed to having to do repair work, I was presented with an abundance of opportunities to set the bank up for the future. That’s a rare thing to have,” he notes. “I’m very thankful to the stewardship of directors past and present for creating such a remarkable brand. We see ourselves as custodians of the brand and the culture here. It’s up to us to leave the bank in a better position than what was given to us. We have a 143-year legacy to uphold.”

Although it’s a small part of the wider banking market, Heritage is proud to be Australia’s largest customer-owned bank. Based out of Toowoomba, it has a strong representation of 60 branches throughout South East Queensland – one of the biggest physical distributions of any customer-owned entity. “However, we don’t have any branches in Sydney or Melbourne, where we’ve been distributing through broker markets for the past 20 years. This has been working for us, but people don’t see the brand. In the long-term, I want us to be present and known in these areas.”

When everything is stripped back, says Peter, all that matters is helping people. “Passion is an important part of this, and it’s something we see in our people. It’s a twinkle in their eye as they go the extra mile for the customer,” he explains. “The next part is our mission to deliver a great customer experience every time. Banks do a lot of stupid things that customers don’t understand and, when we dig a bit deeper, some of these processes no longer make sense. So, it’s a matter of driving these issues out to make our lives, and the lives of our customers, easier.” In the short-term, Peter’s goal is to further this mission through a four-pronged strategy. “First, we want to attract and grow our new client base. We need to change from a physical network mentality. The younger generation don’t want to bank in-branch. Instead, they use their mobile phones.

If we want to attract millennials, we have to bank the way they do. We’ve reset our IT structures to offer strong digital applications as well as a physical bank they can visit if they need to talk to someone. So, we’re moving from a ‘physical with digital’ to a ‘digital with physical’ mindset.”

Fast facts:
According to Peter Lock, leaders are:

Hand in hand with this, Peter explains, is respecting and maintaining existing clients that have banked with Heritage for years.

“This means realising not everything has to be digital. We don’t want to be a bank obsessed with shiny new things: we want to be balanced."

"Third, we want to build a bank we are proud of – one that creates owner value and good relationships with regulators, staff and communities,” he explains.

“Our final goal is to attract and grow passionate people. We want to bring them in, give them a career path, and help them help us make a difference.”

“We don’t want to be a bank that’s obsessed with shiny new things: we want to be balanced.”