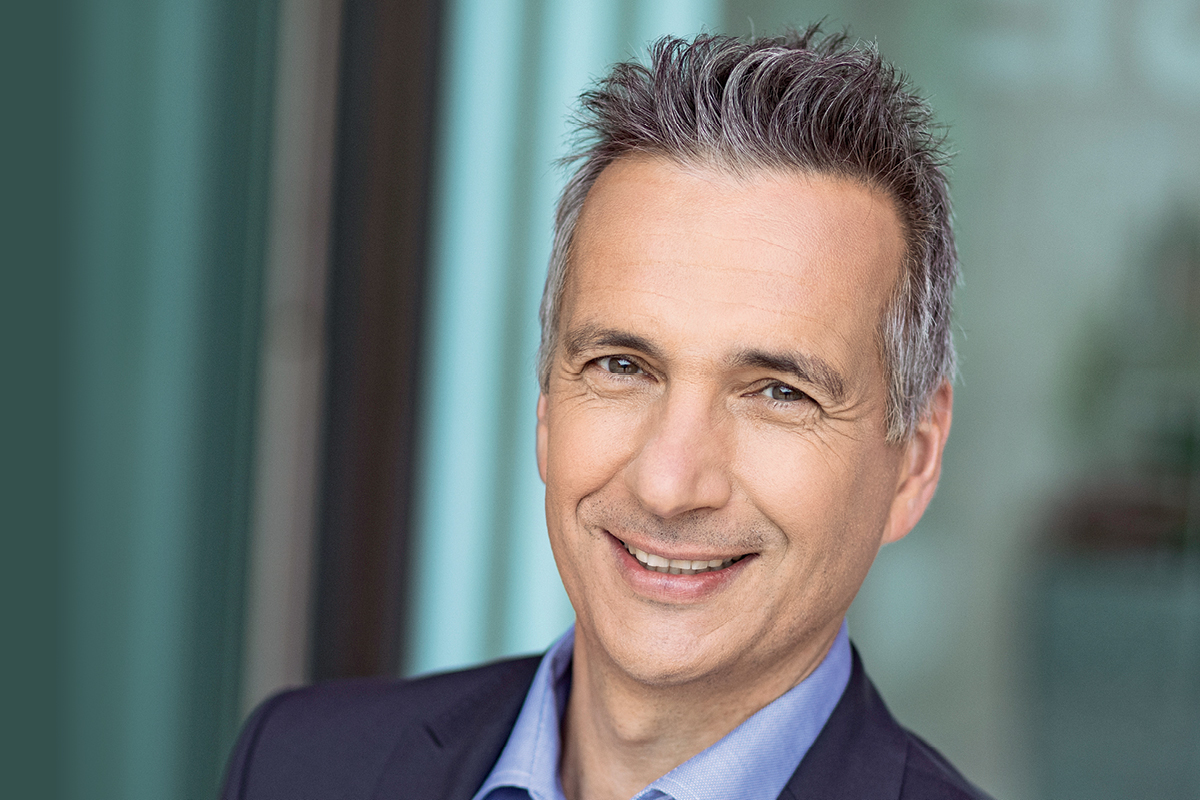 Andreas Ronken would not be considered your typical German engineer. While studying industrial and mechanical engineering in the United States and Germany in the 1990s, he realised that he didn’t get the same thrill as his peers did from tinkering with the minute details of an intricate machine, returning to the drawing board repeatedly until it ran at maximum efficiency.

Instead, Andreas’s education taught him that he is the sort of engineer who wants to see immediate results. He wants to see the fruits of his labour in the daily lives of millions of people.

“When you build part of a car engine, it’s important, but that doesn’t give me energy,” Andreas says. “Producing something real and pure that people see and buy and enjoy every day – that gives me quite a lot of energy.”

It was in pursuit of this energy that led Andreas to become CEO of the most quintessential German chocolate brand, Ritter Sport. As supply chain Managing Director since 2005 and then CEO since 2015, Andreas has harnessed his engineering skills to implement a series of projects aimed at making Ritter Sport’s global footprint wider while simultaneously making its environmental footprint smaller.

Already distributed in 100 countries and ranked the third-largest chocolate maker in Europe, Ritter Sport’s colourful packaging and wide variety of flavours and ingredients have made its products instantly recognisable in many parts of the world.

But there is still potential for growth, Andreas says, and it has fallen to him to maximise it. “Our growth strategy is to have a broad customer base. We are looking for new clients internationally so we are, of course, targeting China and Russia, which are currently our biggest growth markets.

“We’re also focused on the UK where we are seeing some very positive results. Then there are the chocolate products we’re developing for South Korea, Thailand, Indonesia and, of course, the US,” says Andreas.

The key to this expansion is to be what Andreas refers to as “locally relevant”. Although Ritter Sport comprises just a single brand, the company nonetheless tailors its messaging and structures its business models in such a way that strives to promote diversity and international adaptability.

“We are a very big company with deep values, and we need to make sure that the good stuff stays in the company. That means our caring, our family values and our German heritage,” Andreas says.

“But in order to achieve international innovation, we have had to open ourselves up to what are international values. We have people working for us from all over the world and hearing conversations carried out in English is common.

“It’s a very interesting journey on which to be, and it’s what motivates me to take Ritter Sport up to the next level of success. I want to make it a very powerful company in the global arena.”

Rapid global expansion often requires a burst of resource consumption. In the case of Ritter Sport, the primary resource is cocoa, and the company has set up its supply chains to ensure that all of its cocoa is sourced in a way that improves the lives and livelihoods of the people who grow it. 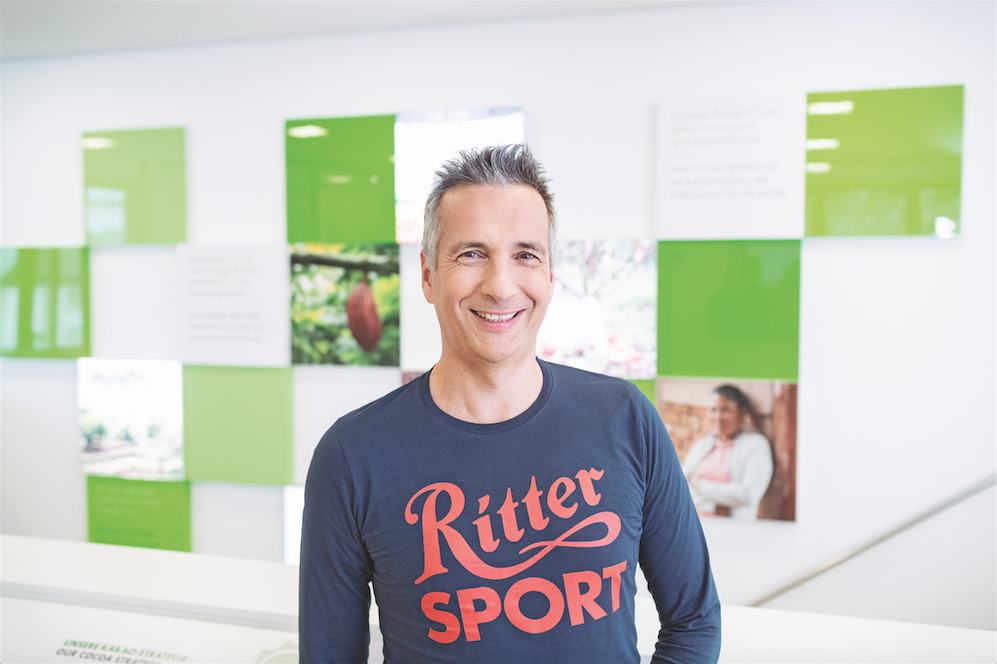 “Sustainability only works when measures are put in place at the point of origin,” Andreas says. In Nicaragua, Ritter Sport operates its own farm, where nearly 400 employees tend to more than one million cocoa trees, which will supply 25 to 30% of the company’s cocoa volume in the future.

“This really was a game changer for us because now we are deeply into farming,” Andreas says. “Our farm proves that our commitment to sustainability is more than just greenwashing. It proves that it’s possible to grow cocoa in a natural way that is good for the people who live in the area and good for the natural environment.”

In 2018, Ritter Sport became the first major chocolate bar manufacturer to exclusively source certified sustainable cocoa. Moreover, while Ritter Sport could feasibly offer more varieties of its assortment with single origin cocoa, Andreas says that the relationships he has formed with growers in other parts of the world are too valuable to give up.

“It would be very easy for us to source everything from South America, where we have very good connections. But we recognise the importance of cocoa to the economies of Ghana and the Ivory Coast, and we believe we have a responsibility to work with these people and to support their livelihoods,” Andreas says.

“If a cocoa delivery comes in and doesn’t taste right, we can’t send it back to the farm. That’s why we rely on our long-term partners to make sure the quality and taste are correct before the cocoa arrives at the gates of our factory,” Andreas says.

“Fine cocoa is like fine wine,” he goes on. “There are a dozen varieties, and you can only have really, really good chocolate if your cocoa comes from the right trees, the right climate, the right fermentation process. You might not know it when you bite into one of our chocolate bars, but it takes the work of hundreds of people from around the world to ensure that your experience is one of pure pleasure.”

While running a chocolate company sounds enticing on its own, it was actually the fact that Ritter Sport is a familyowned business that attracted Andreas to the company.

“My personal view is that family companies are much more fun to work for and are also more values-oriented than companies that may be on the stock market but with no family involved,” he says.

We recognise the importance of cocoa to the economies of Ghana and the Ivory Coast, and we believe we have a responsibility to work with these people and to support their livelihoods.

Ritter Sport’s values have made it easy for Andreas to create a company culture that is informal, friendly and communicative. Over the past few years, the company has invested €20 million into a new, open-plan office with areas for meeting, reading and recreation.

The aim is for the entire team to feel equal and united in the common goal of producing and distributing the highest quality chocolate across the globe.

“You won’t see people wearing ties at Ritter Sport. You will see informal communication and everybody dressing like they dress at home. We believe this gives you more energy because you don’t have to be a different person at work,” Andreas says.

By giving his team the freedom to be who they are at work, Andreas has also given them the freedom to think creatively about the business, resulting in an atmosphere where experimentation is celebrated.

“We’re always trying something new. I think if you want to learn, you need to experiment and just learn from doing. Of course, these sometimes fail, and that is why we try to execute them quickly, so that negative results do not weigh us down for two or three years,” Andreas says.

“We try to be agile and run in sprints,” he adds. All of this freedom depends on the support of the family, which has been at the helm of Ritter Sport for three generations. “This is why I’ll always try to work for a family company,” Andreas says.

“Instead of focusing solely on yearly profit, I’m able to concentrate on ensuring the next generation of the company is stronger than it is today.”