During its 23 years of existence, YO! Sushi has been a living testament to the fathomless value of being the first pioneer to bring a simple product to the mass market. Before YO!, sushi was a niche product in Britain, confined to the haunts of cultural elites and the well-travelled.

But in 1997, YO! set off on a journey that would see it expand from its first location in London to cities around the world, all built on the idea that sushi is for everyone. The chain’s Founder, Simon Woodroffe went on to gain fame as a celebrity investor on the series Dragons’ Den, and the restaurant was featured in the film Johnny English, in which Rowan Atkinson’s titular secret agent gets his tie stuck in the sushi conveyor belt.

But even with the company firmly ingrained in the cultural consciousness of its home country, there remains potential for growth – for YO! to carry on its mission beyond the British Isles and even to create markets around other East Asian products the way it originally did for sushi.

Leading this expansion is its CEO Richard Hodgson, who says he is “on a mission to bring really high-quality, fresh Japanese food to the masses because it’s healthy, it’s nutritious, it’s delicious, and it makes a change from what a lot of people have been eating for years.”

The plan is to leverage the success of YO!’s more than 70 restaurants to catapult a variety of Japanese food products into new routes to market, such as supermarkets, universities, hospitals and delivery services. This diversification is the result of a deep reconsideration of where YO!’s potential lies.

“The boundaries are blurring between restaurant businesses, supermarkets and delivery businesses,” Richard says. “What has made YO! so successful for 20-plus years is the delicious Japanese food that we sell – whether it’s delivery or sold in supermarkets or at a university is irrelevant. We’re not a restaurant business; we are a Japanese food business.”

Richard is uniquely suited to the challenge of reorienting the celebrated sushi chain. Before being appointed to lead YO! in 2017, he served for three years as CEO of Pizza Express, which transferred its high street restaurant success into supermarkets in the 1990s. In the past couple of years, Richard has overseen YO!’s acquisitions of Canadian sushi chain Bento and UK pre-packed sushi supplier Taiko Foods, as well as its merger in 2019 with Snowfox, which operates around 700 sushi kiosks in the US. These deals have brought YO!’s value to more than US$400 million (€360 billion), making it the largest sushi company outside Japan.

Reflecting on these milestones, Richard says the real achievements were not the acquisitions. “It’s easy to acquire a business, but it’s very difficult to then integrate that business seamlessly and make sure that what you end up with is greater than the sum of the parts,” he says.

“We’ve managed to seamlessly integrate these three businesses, and that’s why our revenues and our profits are significantly up. We will continue to look for like-minded businesses that share our DNA, which is all about high-quality, fresh Japanese food, and if we think we can add value to them, and they can add value to the YO! Group, then we will consider acquiring them.”

It’s one thing to raise the value of a business through acquisitions, and it’s quite another to do it organically. For Richard, this is the challenge that has come to define his tenure as CEO. “One of my frustrations is that too many people in the UK are dismissive of sushi because they think it’s all about raw fish,” he says, citing a statistic that only one in four people in the UK eat sushi compared to one in two in Canada and one in three in the US.

YO! is a global brand with close to 100 restaurants operating across eight countries: most are located in the UK, with around 20 restaurants franchised overseas in France, Denmark, UAE, Saudi Arabia and Australia.

“Sushi means ‘with rice’, and most people like rice. We are in a country now where chicken tikka masala is the most popular dish, and our customers are eating rice with Chinese food, Indian food, all sorts of Asian food,” Richard says.

“The rice we sell with our fish and our chicken and our prawns and our vegetables – it’s not an alien food, and I just wish we could get more people to be brave to try it because, actually, when we get people to try our products, firstly, they love the traditional sushi.

“Secondly, they realise that YO! sells a lot more than sushi. It actually makes up less than half of our menu, and indeed, there’s a fantastic array of delicious food available within our restaurants.”

For instance, the chain’s bestselling item is not a sushi item at all but chicken katsu curry. Richard adds: “The vast majority of customers who try YO! for the first time wish they had tried it earlier.” 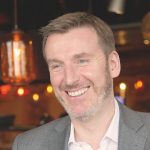