CEO Rui Miguel Nabeiro, from Grupo Nabeiro–Delta Cafés, talks about how he re-invented the family business by innovating its offering.

CEO Rui Miguel Nabeiro, from Grupo Nabeiro–Delta Cafés, talks about how he re-invented the family business by innovating its offering. 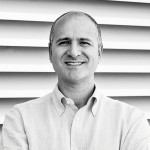 In a strange turn of events, it was during one of Portugal’s worst economic crises that Grupo Nabeiro–Delta Cafés had one of its biggest successes. Founded in 1961, the company was started by current CEO Rui Miguel Nabeiro’s grandfather out of a shed in Campo Maior with just 3 employees. “He bought green coffee beans, roasted them and then sold that coffee in Spain and in Portugal,” says Rui.

After finishing his studies at the Católica Business School in Lisbon, Rui was keen to get into the family business, but first his grandfather thought it would be beneficial to work for other people in the industry.

“I went to Madrid to work with the Neumann Kaffe Gruppe, which is a German company,” says Rui. “At that time, they were the leading company for trading green coffee beans and I was helping them in the purchasing process, which involved some travel to Vietnam to source the beans. After that, I went to Italy where I did some training at Brasilia, which is a coffee machine company.”

Rui then returned to his hometown of Campo Maior to take up a role in the marketing department of his family business. From there he spent time in production, developing new products and looking at new markets. “Then a vacancy opened up in the commercial arm of the business in Lisbon so I applied for that — even though we are a family business, I still sent my grandfather an application to go to Lisbon and be the head of the office there.”