Parramatta City Council is emerging as a national leader in local government, focusing on its role in managing a major CBD environment and providing a high level of service to residents, workers, and ratepayers. Its current focus is on urban renewal, namely its $1.6-billion development of Parramatta Square.

The project will be completed in six stages and includes 5 Green Star-rated office towers; a 90-storey apartment block with a hotel, sky deck, and experience centre; improved community facilities; and an integrated public transport system. It will ultimately provide the City of Parramatta with a foundation for growth that is environmentally sustainable, vibrant, and aesthetically pleasing.

Greg Dyer has been serving the local government as CEO since February 2014 and says it is an incredibly opportune time for the area to progress. His role is to help the 15 elected councillors realise a vision and strategic direction for the betterment of the community. He believes that Parramatta has huge potential as it grows and strengthens its position as a city hub. We have a really pivotal role to play in economic growth from a national perspective, not just from a local government perspective, he notes.

Greg studied a double degree in economics and law, majoring in accounting, before he started his professional career with KPMG. There he gained a wide range of experience in a variety of industries, which prepared him well for his later work in the media, computer equipment, and property sectors. Furthermore, he represented Australia as a professional cricketer in the late 1980s. 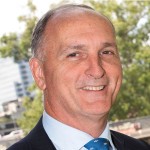