No swanning around: Mike Foley 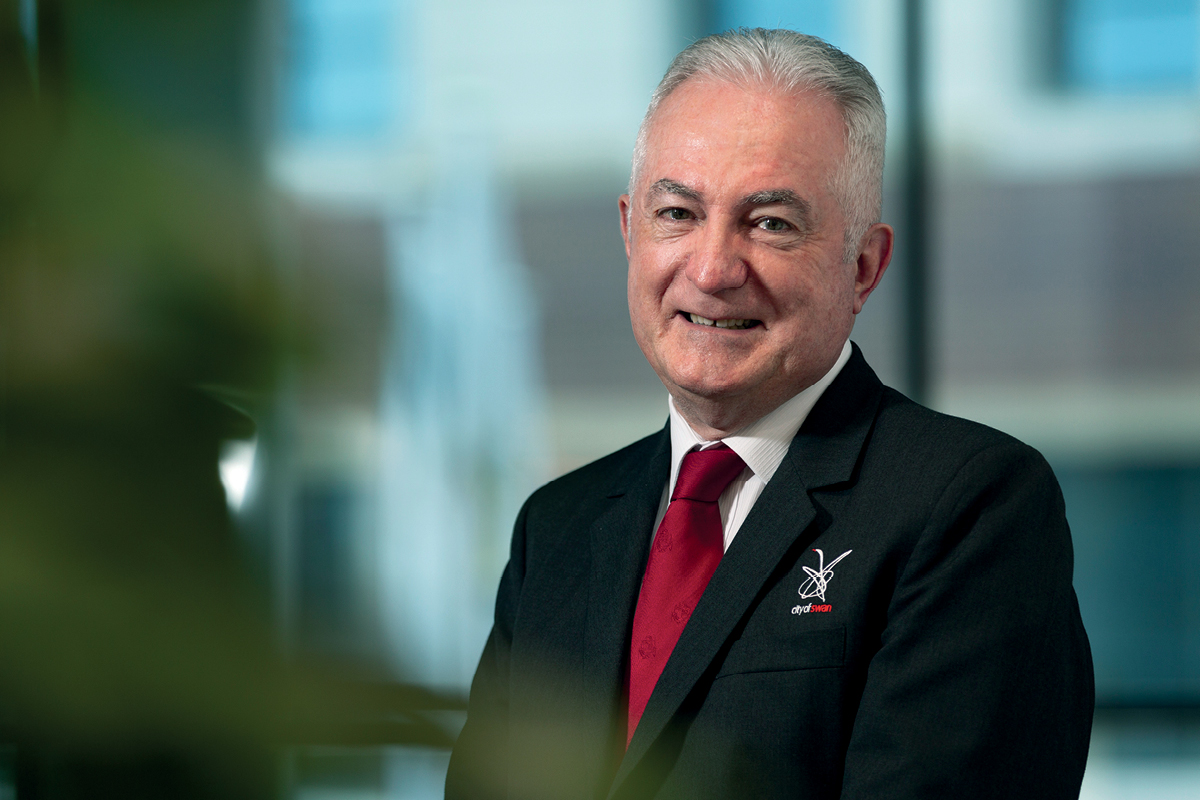 Mike Foley is a man of many layers. Layers that are not so much complex as they are incredibly diverse – a lot like the local government community he represents. Asking the CEO about his 37-year career at the City of Swan leads to an ostensibly endless conversation, flitting from aged and youth care, to upgrading road links and building swimming pools at community centres, to cakes.

It’s an enormous hodgepodge of services Mike is determined to produce for this local government area in Western Australia – a commitment bordering on passion. You are left with the sense that he has so much more to reveal than our interview allows. Or, as he quite neatly sums it up, “there’s so much going on”.

The City of Swan, about 20 kilometres north-east of Perth’s CBD, encompasses 1,044 square kilometres and is home to a population nudging 150,000, living in 42 suburbs and supporting more than 10,000 businesses. “We’re one-fifth of the Perth metropolitan area so we’re quite large,” says Mike. “Our mantra is ‘one city, diverse places’. We’ve got it all.”

“Our mantra is ‘one city, diverse places’. We’ve got it all.”

Named after the Swan River, which borders to the north and the west, the City of Swan is predominantly rural, with 809 hectares of national parks, state forests and nature reserves, including the Walyunga National Park, Avon Valley and the spectacular Swan Valley. Arable land is used for forestry, agriculture and grazing, while industry is driven by manufacturing, construction and transport.

“These huge road trains in Western Australia carry up to 100 tonnes of freight and, unlike in other cities, can actually come right into the centre of Perth’s metropolitan area, passing through the City of Swan,” Mike explains. “At Hazelmere, they load everything from teabags to nuts, bolts and locomotive engines. It’s like one big shopping centre.”

And then, of course, there are the cakes. “You’ll love this one, a bit of trivia for you,” Mike laughs. “Due to the large number of cake manufacturers in Malaga, cakes are actually the most manufactured product within the City of Swan. Everyone thinks it’s bricks or other things we do but, no, it’s cakes.”

There’s no doubt Mike has a vast spreadsheet of trivia he’s mentally filed away since he joined the local government in 1982. Rising through the ranks from a construction engineer to be appointed CEO 13 years ago, his memory for detail is impressive – particularly for relatively ‘new’ staff boasting a mere decade or less of service. 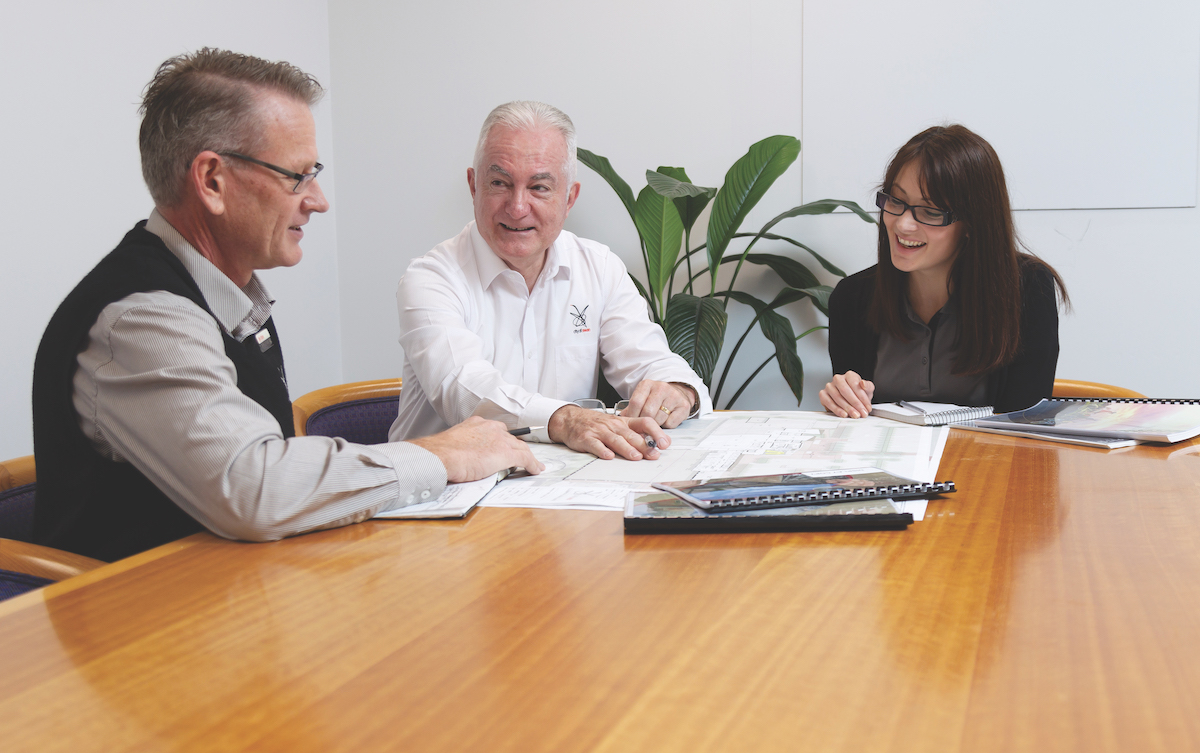 It’s clear Mike gets a kick out of remembering stuff no-one else does. “Yes, some people say CEOs should turnover every seven years, or even earlier,” he cheerfully admits. “But then staff walk in one day saying something has to be done about something and I’ll recommend someone who I remember has already done the job. When they ask how I know, I just tell them to do a little Google research, and there they have it.”

Memories aside, more than anything else, Mike appreciates the opportunities served to him during his time at the City of Swan. Opportunities, it must be said, he’s grasped not for personal advantage, but more for the community he represents. He’s witnessed the local population quadruple from 35,000 to 150,000 and is proud to say infrastructure has grown along with it.

“We’re not just talking facilities supported by councils, but major projects subsidised by the state and federal governments. We’ve run huge campaigns lobbying for government grants to get things done for our community,” he says.

“The Northlink WA project is one. It’s 42 kilometres of new road linking Perth Airport to Muchea, most of which passes through the City of Swan. It will take a lot of the heavy trucks and road trains off our roads, while a whole series of interchanges will pick up our suburbs. Now we’re working on the industrial benefits opened up by this corridor.

“We did very well to obtain major funding initiatives through the last federal election to serve our community,” he says. “A railway line to Ellenbrook, interchanges at Roe Highway and the Great Eastern Highway Bypass, all have funding allocated to them.” 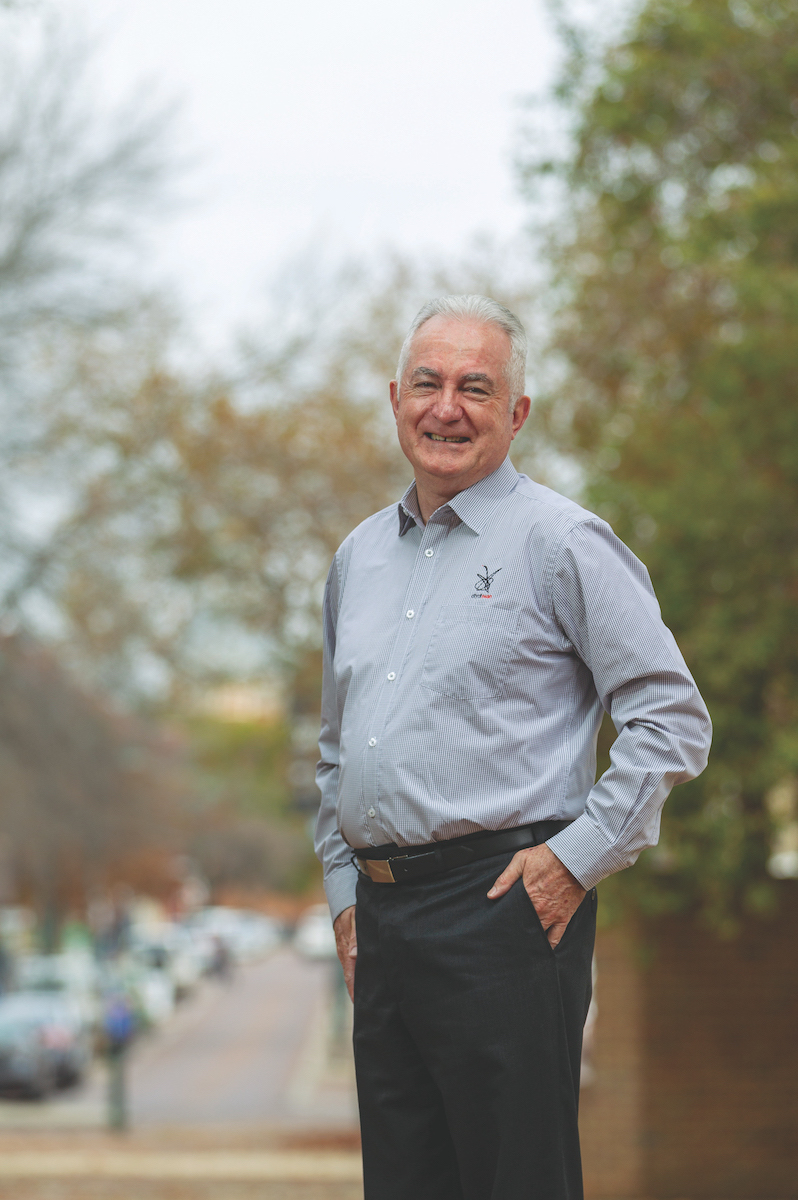 Mike makes no apology for furiously networking and nagging politicians to get what he wants for his region, which luckily for him, is home to four federal politicians and six state electorates.

With so much potential influence literally on his doorstep, Mike admits he doesn’t waste an opportunity to tap into it.

In fact, if there was a legacy he would like to be remembered for it’s how well the City of Swan used its competitive advantage to secure state and federal funding.

While Mike understands that major projects, such as upgrading transport links, are crucial for the City of Swan, he’s just as passionate about securing strategies to improve areas within the suburbs themselves.

He’s currently in discussions with the Metropolitan Redevelopment Authority to use old buildings to host community groups, including Bicycles for Humanity, the Men’s Shed and The Machinery Preservation Club.

“We also want to improve safety by supplying CCTV, providing playing fields and aged-care facilities and getting swimming pools for community centres for residents who live up to 40 kilometres from the coast. That’s a huge priority, because it gets hot in the middle of summer – really hot.”

As CEO, Mike doesn’t have a say in which projects councillors prioritise. His job is to provide the budget and ensure his administrative departments, such as environment, finance, planning and building, implement it. Working on a 10-year financial plan, the budgets for each year are locked in well in advance to allow projects to be planned as funding becomes available.

“We start our budget process among our staff quite early, around February, and have already started for the following financial year of 2021. We have to work in advance because you can’t just put A$1 million onto the budget and expect it to be implemented that year. If you want to build a community centre, for example, you require public consultation, then planning followed by detailed design, and that can take up to 12 to 18 months easily before you even start turning the soil on the ground.

“I’m no different from any other CEO in that I answer to a board of directors and have teams of people carrying out the work, such as checking designs, construction and environmental impacts,” he explains. “It’s all about my implementing the plans councillors have decided upon.”

A quietly spoken man with an undercurrent of steely determination, it’s clear Mike likes to get things done with no mucking about. He describes his leadership as consultative but decisive and, while he seeks and welcomes feedback, he doesn’t dither when determinations are needed, unpopular or not.

“Sure, I will consult with my executives and get feedback, but I make sure I take a leading role. Once I make a decision, we move forward. I don’t procrastinate on things,” he says.

“Once I make a decision, we move forward. I don’t procrastinate on things.” 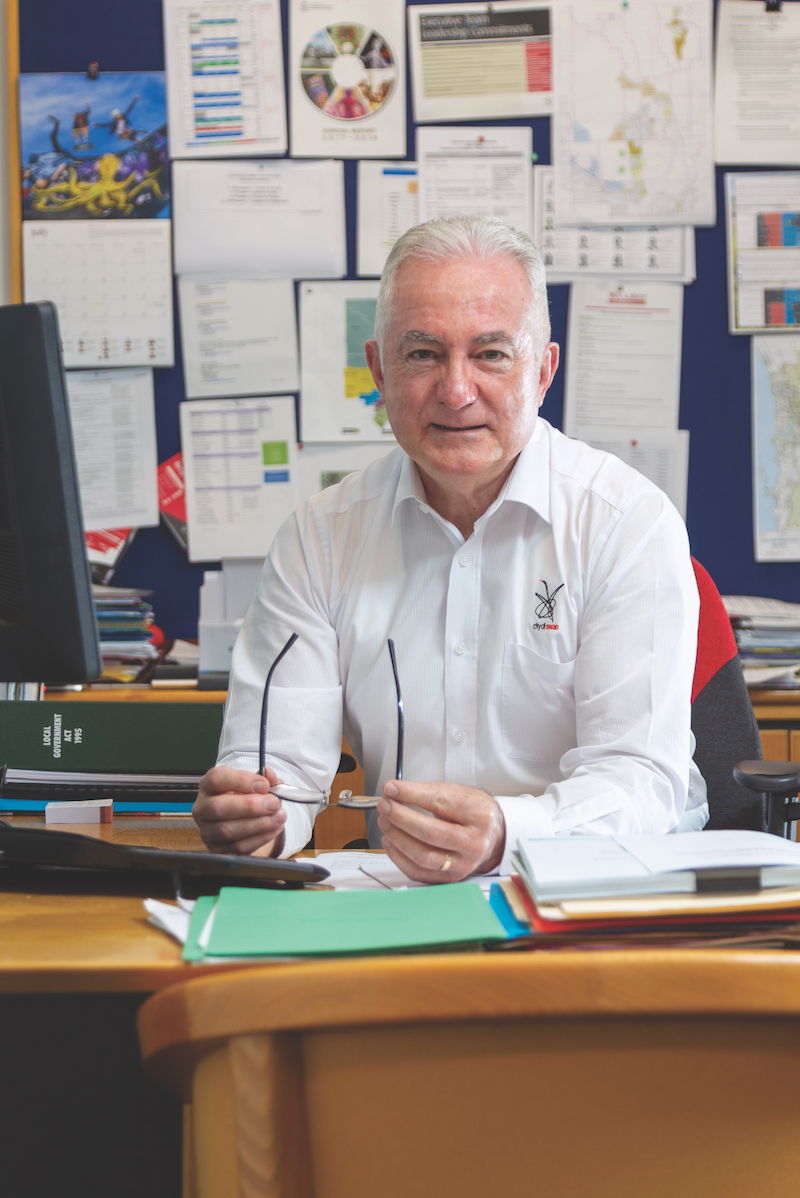 “At the same time, you’ve got to push back a bit and encourage people to make decisions themselves. I suppose, being an engineer and having to deal with contractors on the job and having to deal with various things out in the field, you’ve got to prove that you can talk to people so they get the message about what you want. You can’t dillydally and say, ‘Oh, look, I’ll think about that when I come back tomorrow’, you have to be fairly direct.

“I do ask what the alternatives are and if they tell me they don’t have any, I ask them to go away, think about it, and come back with some. Not one, but several.

“Naturally, you also have issues from time to time that require unpopular decisions, such as having to say goodbye to people because they’re not doing their job. When that happens, I ask the question, ‘What’s the best in the long-term?’ Normally, nine times out of 10, people come back and recognise it as a good decision. You don’t hear about it at the time, of course; you hear about it afterwards.”

Mike admits he’s probably been at the City of Swan too long to adequately describe the work culture of his organisation. He feels it’s best summed up by others; namely, the people he has worked with and still works with, who describe it simply as ‘the Swan way’. “They say we’ve got a very strong culture where people work together and get things done. That’s apparently ‘the Swan way’,” he explains.

Meanwhile, Mike’s nearly four decades of ‘the Swan way’ are so entrenched he has an in-built radar constantly tuned in to notice everything going on in his region, particularly during his 20-minute commute to work.

“Yes, I notice stuff while I’m driving,” he laughs. “I’ll bring it up with staff and they’ll immediately know which way I’ve come to work that morning. But it keeps them on their toes, because if I’m picking it up, so should they!

“But you’ve always got to be aware. You have to be tied into Swan to understand it, care about the history, the things that are going on now and things that will happen in the future.

“I remember the encouragement I received from my parents. They both left school before Year 10 and told me there were a lot of opportunities out there in the world. They told me that if I wanted to sit around and do nothing for the rest of my life, that was up to me. They provided me with opportunities, leaving it up to me to take them, to get out there and make things happen.” 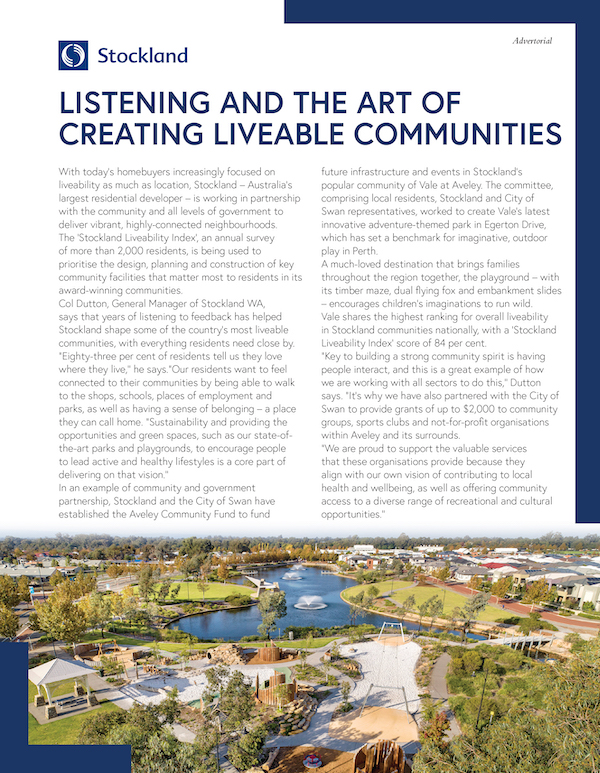 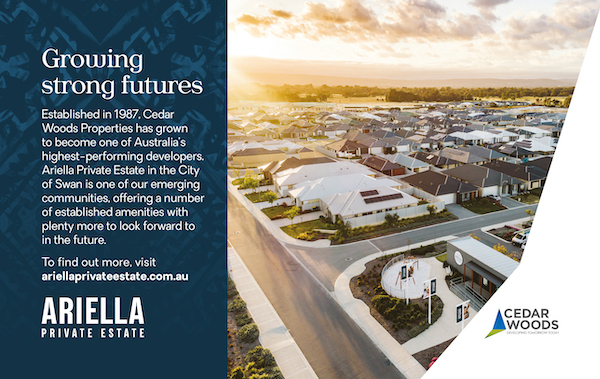 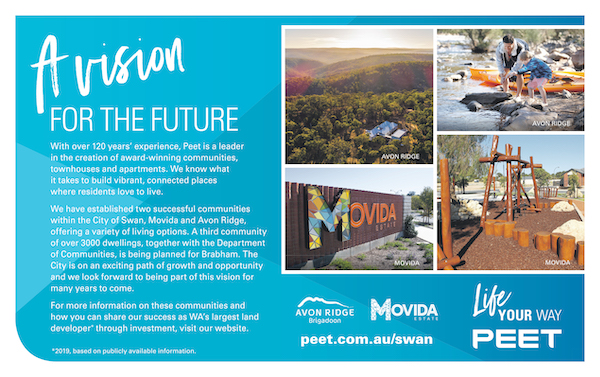 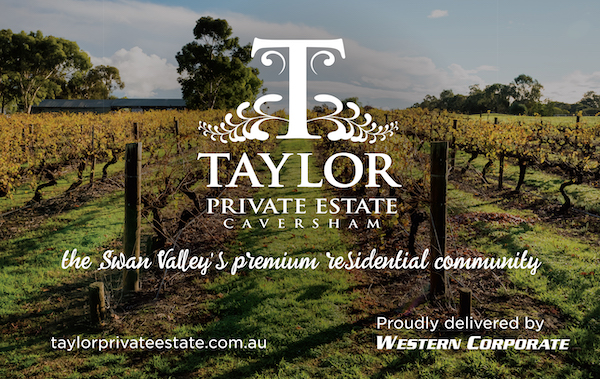