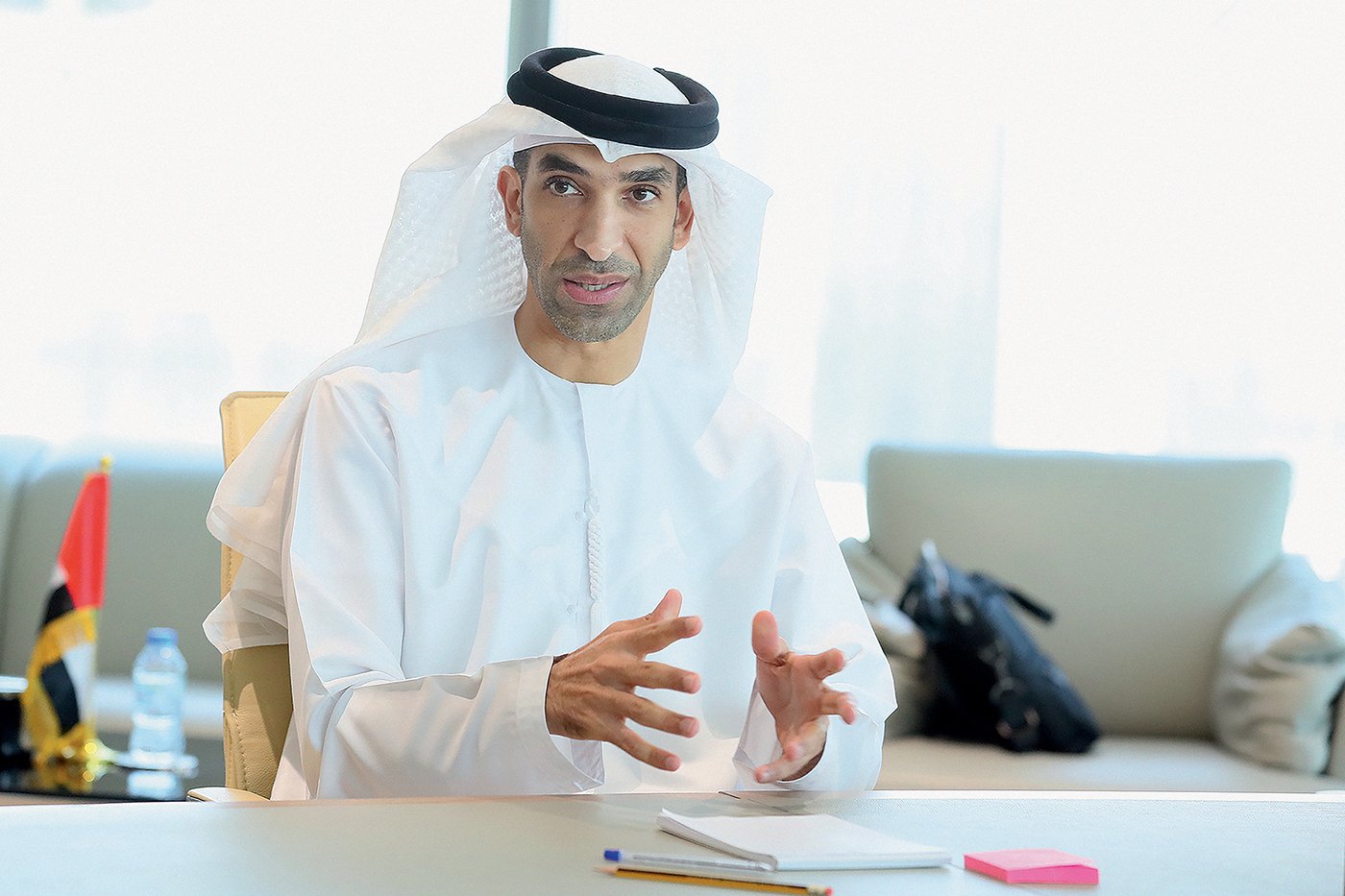 Dr Thani bin Ahmed Al Zeyoudi studied to be a petroleum engineer at university, but he is now helping to drive the UAE’s push to diversify into non-oil industries as Minister of State for Foreign Trade. It’s a trajectory that mirrors that of the country at large.

After fossil fuels helped the nation of more than 9.9 million to build a thriving economy, its leaders have undertaken a massive push to invest in sustainable energies and tackle the problem of climate change.

But the UAE’s trade diversification efforts go much further than energy. Thani is helping to welcome investors from a range of industries into the economy and driving innovation in everything from robotics and artificial intelligence to genetics and advanced digital technologies.

“We have to be futurists,” he says. “We have to be optimistic and visionary. We have to start using the latest technologies like AI, fourth industrial revolution and blockchain, and ensure that we’re going to grow much faster than before. And we have to have very clean road maps and free trade agreements with countries around the world to ensure the smooth flow of commodities and products in the near future.”

Thani took on his current role after the UAE government restructured in July 2020. He is in charge of attracting top talent to serve the country’s strategic goals, and he also oversees the development of non-oil foreign trade sectors and global partnerships.

The role involves creating a more welcoming investment climate to cement the country’s position as a major business destination. He was previously the Minister of Climate Change and Environment, during which time he led the country’s efforts to limit and adapt to the repercussions of climate change globally. 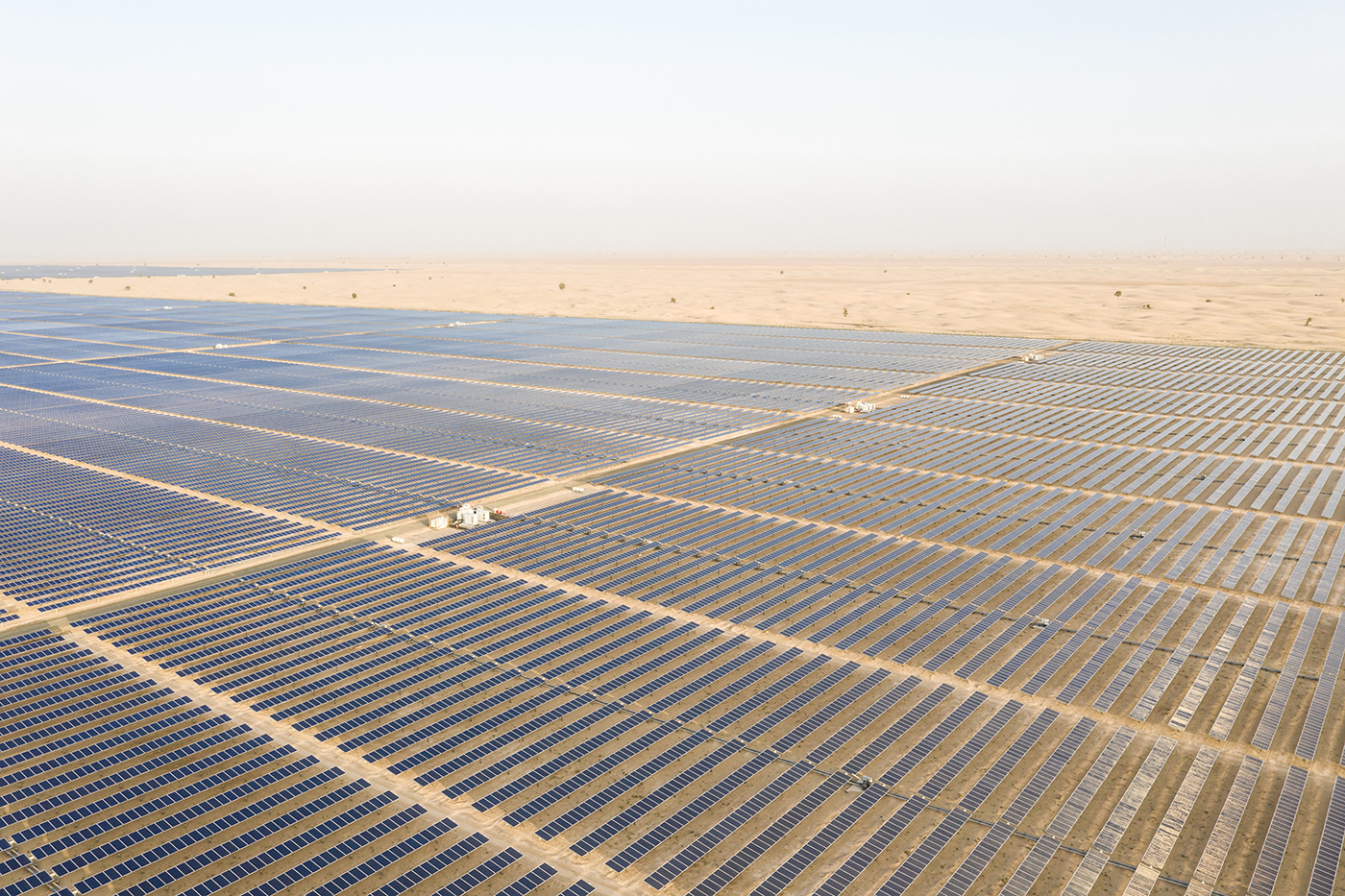 Those efforts involved focusing on the preservation of the UAE’s biodiversity. He also served as the Director of the Department of Energy Affairs and Climate Change at the Ministry of Foreign Affairs and International Cooperation.

Thani was also the permanent representative of the UAE to the International Renewable Energy Agency (IRENA), and played a major role in the UAE’s successful diplomatic campaign in 2009 to host the agency’s headquarters in the capital, Abu Dhabi.

“We really achieved a great result there. It was a huge success on the international diplomatic front for the country. There was a great sense of national pride,” Thani says.

“What we achieved showed that although traditional international politics is viewed as a game of big powers, a small country and a young country like the UAE can leverage its ideas to compete with larger, more established countries.”

The success of the IRENA campaign also sent a powerful message that, despite being an oil-rich country, the UAE needed to transition to a more sustainable energy mix – to diversify. “We have to start investing in futuristic energy supplies and be a model that is not dependent on one resource. It’s not sustainable,” Thani explains.

As part of Thani’s remit, he is also Minister in charge of Talent Attraction and Retention. These are some of his prime concerns on which he is focused:

• To diversify and develop the economic capabilities of national institutions, which will help with the transition towards a digital and sustainable economy.

• To drive the UAE’s efforts to refine and implement policies that will maximise competitiveness, increase collaboration and provide opportunities to facilitate trade and investment. The UAE aims to become the number one country for foreign investment, support research, development and innovation.

• To lead the UAE’s trade and investment strategies with a focus on economic diversification and enhanced investment in industries such as advanced technologies, artificial intelligence, robotics and genetics.

• To attract and retain strategic global talent in the UAE by developing new policies and a set of initiatives to enhance recruitment, promotion and retention.

“The UAE has been a true partner for IRENA, and we’ve been supporting them not only financially, but also politically and diplomatically to ensure that we’re sending the right message. We’re not hosting it merely for the sake of hosting a headquarters. We’re supporting and hosting the agency to advocate for renewable energy and IRENA’s mission to be one of the main drivers in promoting the sustainable use of clean and renewable energy globally.”

To Thani, this shift towards more sustainable energy sources requires a long-term outlook. “If we go back to the last 25 years and look at the whole climate change discussion, most successful countries have been investing heavily in renewable energy,” he says.

“In the UAE, we started this in 2007 or 2008, and we’ve been doing an excellent job in penetrating the market with renewable energy and clean energy projects,” In his role as climate minister, Thani witnessed the challenges of the ensuing years, which he says were characterised by the transition from mitigation to adaptation.

Today, he says, “we’ve successfully brought the topic of protection into most of the business plans of our federal and local authorities”. But even as the UAE has looked inward to manage its energy transition, the country has also recognised the importance of global leadership. “We were one of the first countries in the region to enter the Paris Agreement,” Thani says. 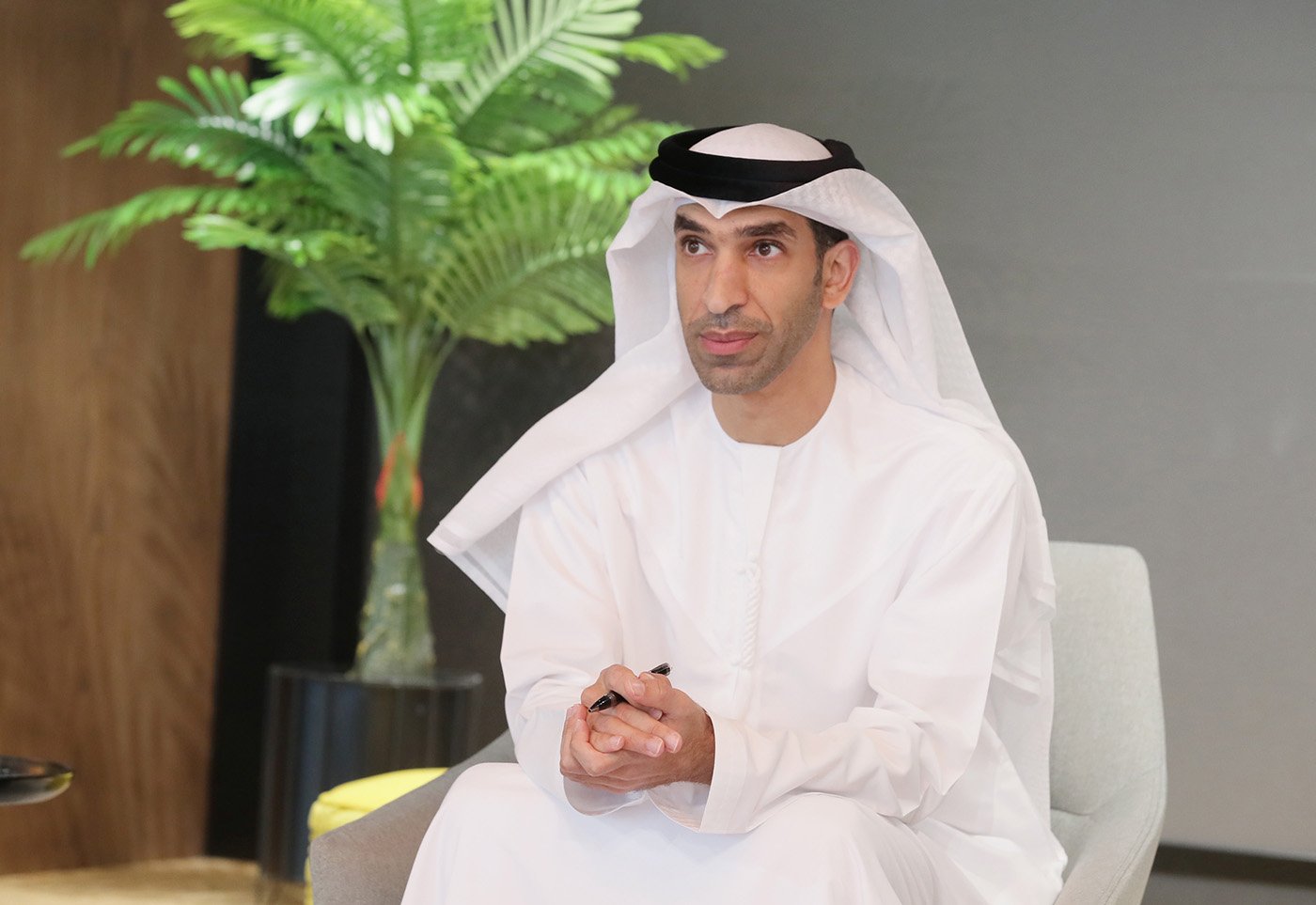 “We, as a nation, and as a developing nation, did not forget our role globally, and we’ve been supporting many developing countries in their climate change mitigation efforts, especially when it comes to the supply of energy, which is crucial for any economic growth. So through investments and humanitarian relief and prevention projects, we have helped so many countries around the world address climate change.”

The UAE government has allocated nearly US$1 billion (€850 million) towards bilateral aid in the form of renewable energy generation projects, which have reached more than 30 countries – most of them small countries that could not afford such projects on their own.

“We’re talking about Pacific island countries, the Caribbean islands, and some African countries that are really in need when it comes to financing those projects,” he says. The country has also invested more than US$20 billion (€16.5 billion) in renewable energy projects abroad, creating a cumulative capacity of 10.7 gigawatts.

We want to ensure that there is an integrated production of goods, services, products and commodities, and that we establish a strong value chain.

“We’re trying to take the national policy and apply it to our business plans and, at the same time, see what we can do with international countries,” Thani says.

As climate minister, Thani witnessed the consequences of climate change up close and developed programs to respond to them. “I don’t want to forget the devastating and severe weather conditions facing so many countries around the world,” he says.

“Our international aid and health sector has always been concerned with the impact of climate change events, so we work with other countries to ensure that they have sufficient medical equipment and make sure that vital things like water supplies get to affected regions.”

For the UAE, going beyond oil means not just leading on sustainable energy and climate change responses but diversifying the economy with bold moves into new technologies. “The focus is on developing the UAE’s economic, touristic and commercial fronts and transitioning from a hydrocarbon-based economy to a knowledge-based one,” Thani says. 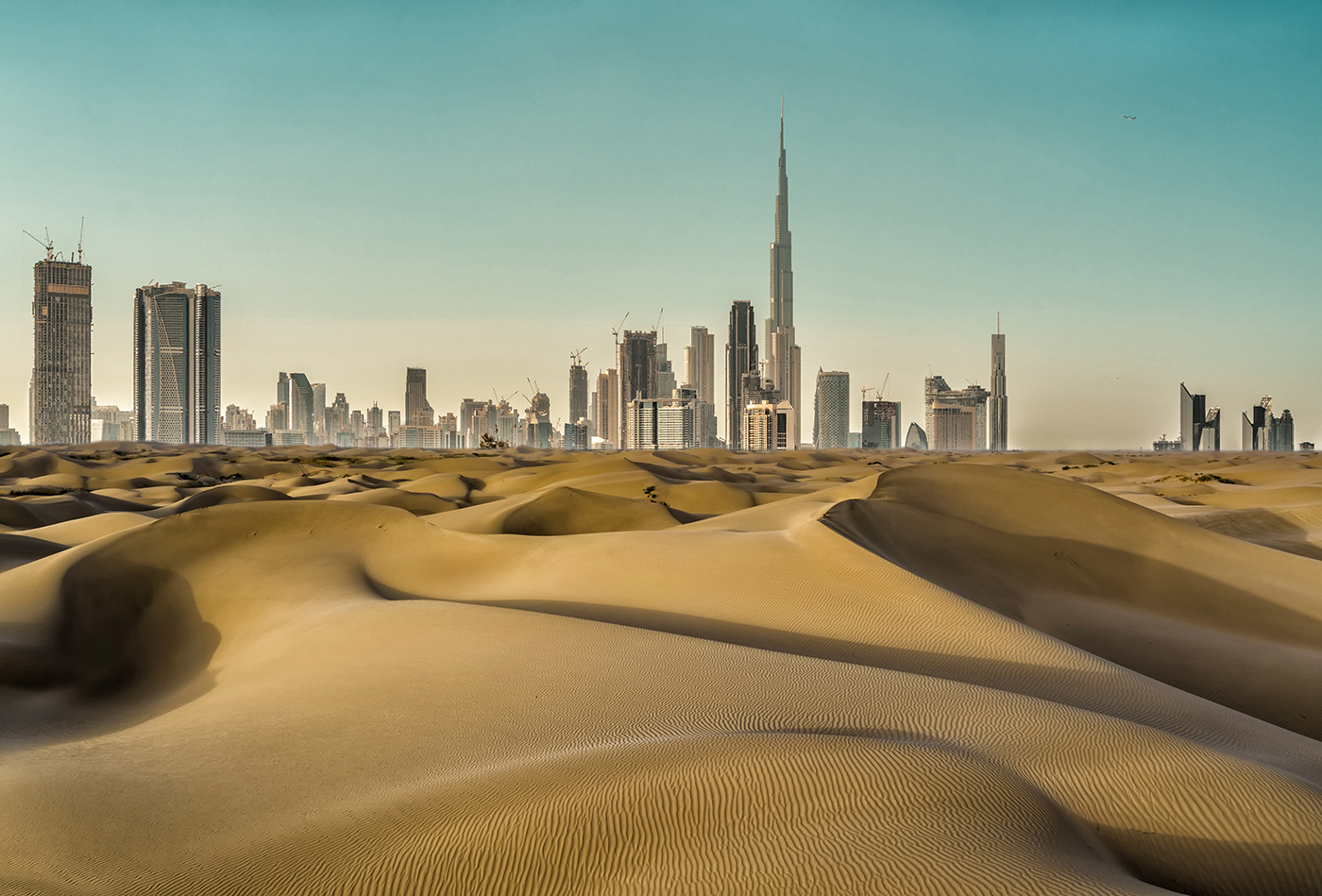 “We’re promoting innovation, research and development, and strengthening our regulatory framework for some key sectors.” Over the past 50 years, the UAE has been heavily focused on revenues from oil and gas, and has invested those revenues into infrastructure, ensuring that other sectors were ready to attract more investment and produce goods for export to various markets.

“We’re going to continue on the same path, exploring the sectors we have that can attract investors and interested business people to the country, and also new markets that we have to open up,” Thani says.

A key part of these efforts involves making the UAE as hospitable as possible to people who want to work and invest in the country, as well as ensuring strong partnerships with other countries.

“What we have been doing, historically for the last 50 years, is ensuring that we have very friendly ecosystems and relations with other countries,” he says.

“We support them during times of crisis and work together during tough times that face the whole region.” To develop foreign trade and investment in the UAE, he plans to improve the incentives for businesses to come to the country.

“We ensure that they have the business ecosystem and the right contacts,” Thani says. “At the same time, we want to ensure that those investors and businesspeople are looking at the UAE as a home for themselves and for their families. The UAE is continuing to push towards economic diversification, and it’s one of the major drivers to encourage foreign direct investment and to reinforce the UAE as a global trade hub.”

As his efforts at diversification continue, investors from a variety of sectors are expected to take an increasing interest in the UAE. “Certain sectors are under revisions, like manufacturing, the industries and renewable energy,” Thani says.

“In the last few years, we’ve entered the space sector as well. We’ve been heavily interested and working hard on the fourth industrial revolution, technologies, education and e-education, which performed excellently during the pandemic over the last few months.”

The UAE is outpacing many other economies in the world, making it an attractive prospect for many investors. Here is a closer look at that success:

• The UAE’s service exports have increased 10 times faster than the world average in the last eight years.

• The value of the UAE’s non-oil foreign trade reached over AED1 trillion (€224.5 billion) during the first nine months of 2020. That accounted for nearly 64% of trade value for the whole of 2019 and underscoring the resilience of the country’s trade sector amid a crippling global slowdown.

The rise of these new industries has been accompanied by significant policy changes that have enhanced the UAE’s economic model and refocused it onto innovation, knowledge, sustainability and competitiveness.

These include the recent amendments to the commercial company laws, which give foreign investors the right to full ownership over their business within the country. “These amendments will help accelerate the growth of SMEs by enabling them to become joint stock companies listed on our financial markets and secure public finance,” Thani says.

The UAE has also invested heavily in health care, showing the country’s resilience in the face of crises. However, Thani hopes to go further in ensuring the continuity and sustainability of the sector.

“Innovation is very crucial in most of the sectors that we’re talking about,” he says. This requires strengthening relationships. “We have to ensure that we are strengthening appetites between foreign and local investors, and we want to ensure that there is an integrated production of goods, services, products and commodities, and that we establish a strong value chain,” he says.

The country has been developing its ecommerce, fintech, agriculture, applied technology and logistical industries over the last 12 years, and investing into infrastructure eventually became crucial to many people surviving and staying healthy during the COVID-19 pandemic. Thani took up his current post at a critical moment.

“My appointment and my two colleagues’ appointments as ministers within the Ministry of Economy came at a time when COVID-19 was really impacting the global economy,” he says.

“This crisis continues to inject a great deal of uncertainty into trade and business activities and what the future of the economy will look like.

“Even though those challenges are still huge, we’ve also seen many opportunities to reshape our policies, create new partnerships and leverage technologies. We’ve been learning where the gaps are, and we will try to come out of this pandemic more resilient, diverse and sustainable.”

As the UAE emerges from the challenges of the past year, the aim will be to continue to attract investment, create jobs and transfer knowledge. “At the same time, we have to ensure that we’re ready for any future crisis,” Thani says. “This is one of the main things that we’re going to take forward.”