This joint venture has now become the largest dental supply business in the country.

As part of the global Henry Schein group, which has revenues of over US$10.4 billion annually, the company supplies more than 65,000 product lines to dental practitioners across the country.

Managing Director of Henry Schein Halas, Mike Covey, has been at the helm since 2014. He spoke to The CEO Magazine about his attitude towards leadership, Henry Schein’s commitment to oral health, and the future of the industry in Australia.

The CEO Magazine: What was your background prior to becoming managing director of Henry Schein Halas?

Mike: Originally, I trained and practised as an optometrist in Australia and in Africa. I spent some time in clinical practice and then went into contact lens research at the University of New South Wales. From there, I progressed into clinical and marketing roles based in Europe and North America with an NYSE-listed company called The Cooper Companies. I then became general manager 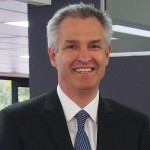