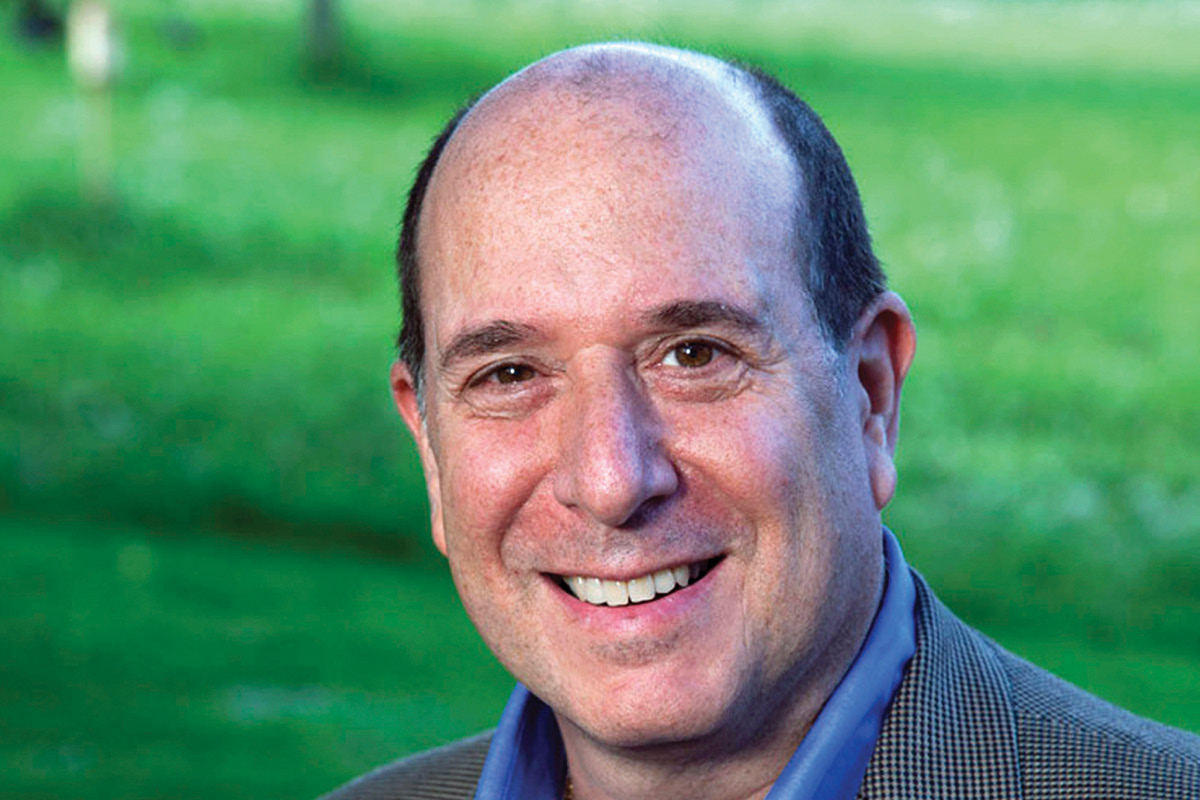 While most business leaders are quick to point out their company’s strong financial performance and growing customer base, employees are often an afterthought – a fact that likely contributes to the global burnout epidemic that’s found to be responsible for up to half of all employee attrition in the US. What’s worse, many CEOs aren’t even aware of the disengagement levels, with 67% of businesses claiming staff have good work–life balances – an opinion mirrored by only half of their staff.

One man is on a mission to break down the culture of disconnected workers. Aron Ain is the CEO of Kronos Incorporated – a US$1.2-billion-plus global business that provides multi-platform human capital and workforce management software across 100 countries, ensuring more efficient processes intended to increase engagement and retention of good staff. But while having great tools can go a long way, Aron says technology is only half the battle. The real work must be done by the leaders themselves.

“We believe that great businesses are driven by great people, and technology is a key part of making that a reality. If great software for talent management helps your people be satisfied and happy, then fabulous. But at the same time, technology is just the beginning. Some of it has nothing to do with our product; it has to do with the organisation deciding that they’re going to take this seriously and put programs in place, and ensure they’ve got great managers who engage with their team on a regular basis.”

Kronos itself employs more than 5,000 ‘Kronites’ around the world, and keeping every one of them happy is serious business. One need only browse Aron’s Twitter feed to see how he demonstrates his commitment to his staff. While recently visiting the Sydney office, Aron tweeted: “On way home from Australia after terrific visit. 650 Kronos customers here now. Wow! Proud of our 135-strong Kronite team. Grateful CEO” – attributing growth to his people rather than simply boasting about numbers. 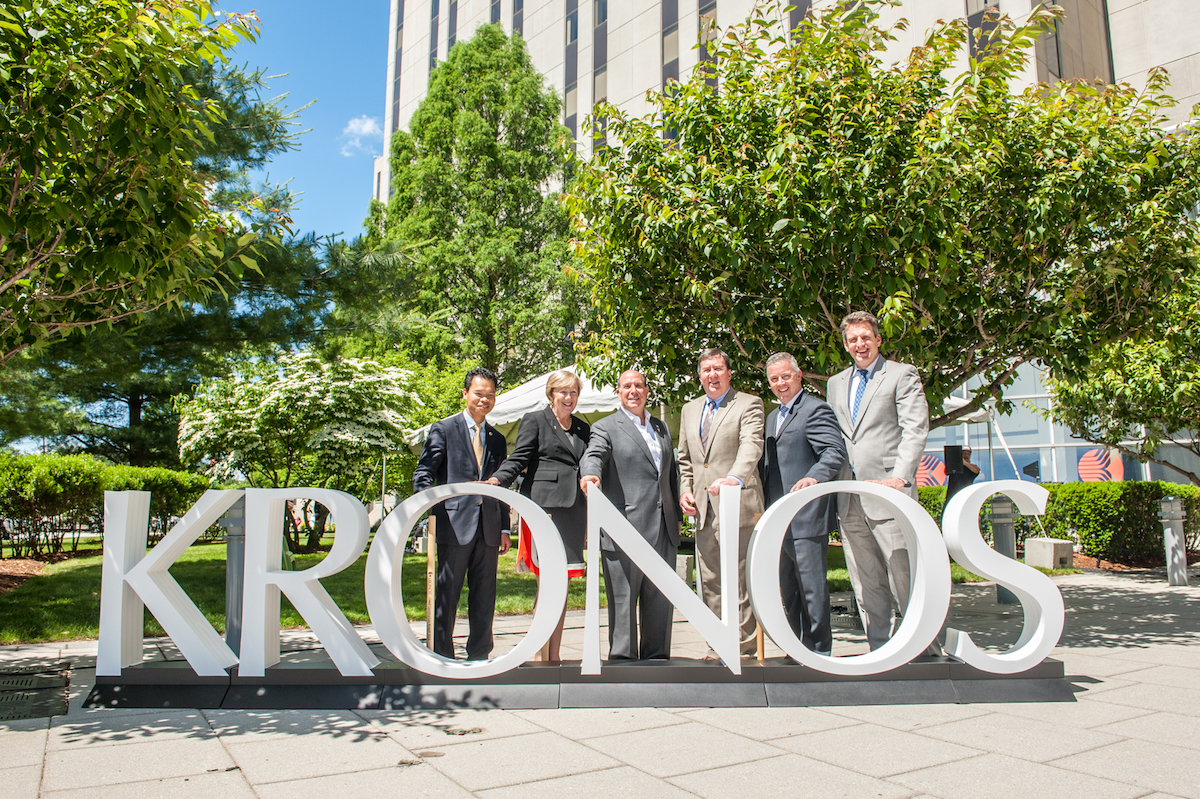 We believe that great businesses are driven by great people, and technology is a key part of making that a reality.

In fact, a cursory scroll through his profile reveals only one other tweet about Kronos’s strong financial results, while all remaining posts centre on employee wellbeing and engagement. These range from lamenting current statistics around burnout, wishing everyone a happy ‘Employee Engagement Day’, or praising Kronos’s own accomplishments in this space, which are hardly few and far between, with its #WorkInspired culture recognised worldwide on a regular basis.

The future is limitless

“Championing employee happiness ourselves is also part of the equation. We believe deeply in looking out for the welfare of the people who work here,” says Aron. “It’s about our culture, our values, how we trust people, and the whole work–life balance concept that we talk about. In fact, we do more than talk about it; we insist on it every single day.”

Kronos employees are regularly praised for their good work, are given unlimited vacation time, and are also allowed flexible and remote working arrangements. It is stressed by the leadership team that the most important thing in their staff’s life should always be their family, not work. “We’re very serious about that. We put programs in place to support that because we know – we see the evidence – that it makes us produce better results.” 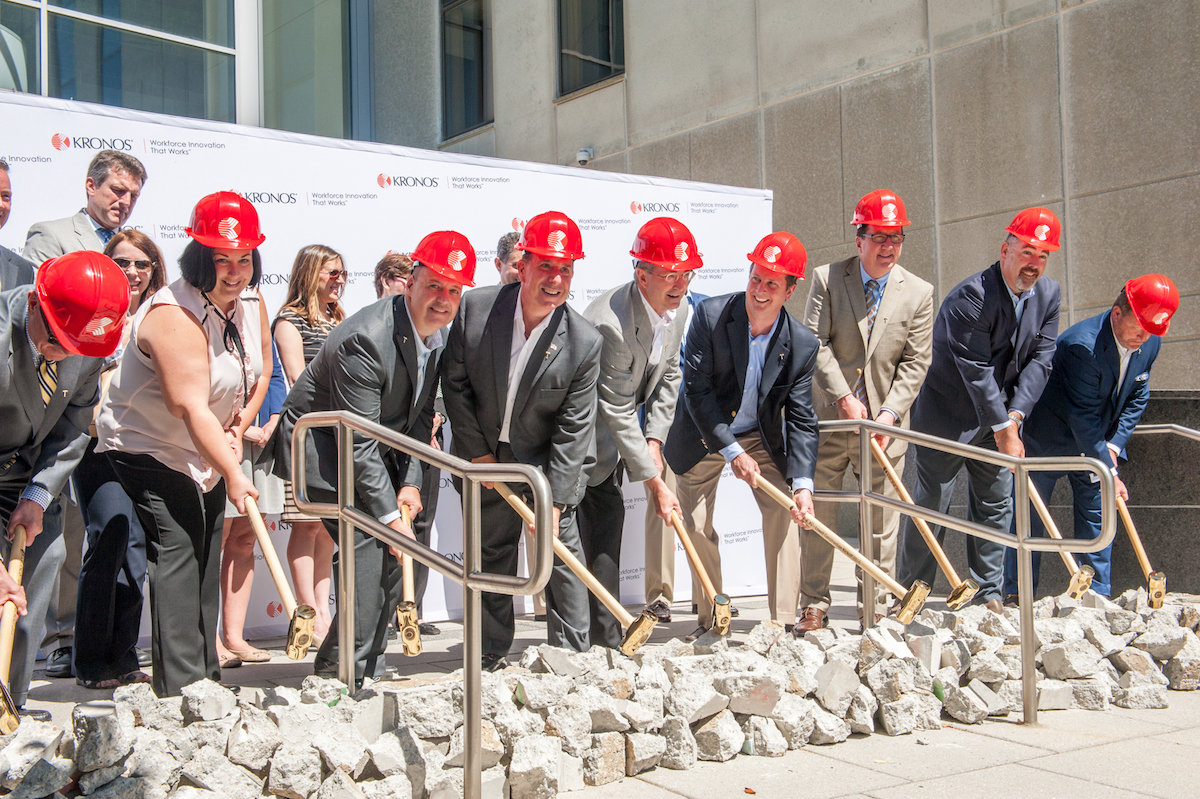 Championing employee happiness is part of the equation

Last year was the first full year with the limitless vacation policy in place, and Aron says while each employee took around 2 and a half extra days of leave, on average, the company’s financial results were the best they’d ever had. Not only does a good culture make employees more engaged and productive overall, but it also retains the best people within the organisation, and this is what gives Kronos a strong strategic imperative, says Aron.

“Retaining great people differentiates us from competitors, since we aren’t forced to waste time and money recruiting new people rather than devising strategy. It’s impossible for us to truly deliver great products and service if we don’t have great people. And those people have a choice about where they work. That’s one of the things I don’t think all businesses understand,” he says. “Businesses say they don’t want to lose good people, but you have to work really hard to create an environment where the best people want to come to work for you, and stay there.”

In ancient Greek mythology, Kronos was known as the King of Titans and the God of empirical time. This explains the company name, considering Kronos was originally a manufacturer of enterprise time clocks. Founded by Aron’s brother, Mark Ain, in 1977, by 1979 Kronos delivered the world’s first microprocessor-based time clock.

While the retention rate in Kronos has led to ongoing improvement in product development and high-quality service, the numerous accolades it brings the business also spurs clients to contact Aron for advice. “What’s amazing to us is how many of our potential customers are asking us not just for our products but also for us to come and talk to their leadership teams. They want to hear about how we’ve created this wonderfully engaged workforce that is producing these magical outcomes, because they want to do the same thing. I just love that,” he says. It’s one thing to claim your employees are proud and happy to be on your team, but with Kronos they’ll tell you themselves.

Making the most of social media

In 2016, Aron was one of Glassdoor’s highest-rated CEOs in the US, based entirely on employee reviews. He was named ‘CEO of the Year’ by the Mass Technology Leadership Council, and was also profiled in a piece on ‘the incalculable value of a good boss’ by The New York Times last year. Respect and praise for Aron is also very evident in his social media feeds, with his posts widely shared and liked, with one even reaching 45,000 views.

In response to Aron’s posts on LinkedIn comes praise from staff and customers alike calling him a ‘true leader’, while his employees around the world assert that they’re ‘proud to be a Kronite’ (reflected in a ‘Great Place to Work® report’ where 92% of employees said they’re proud of their company). 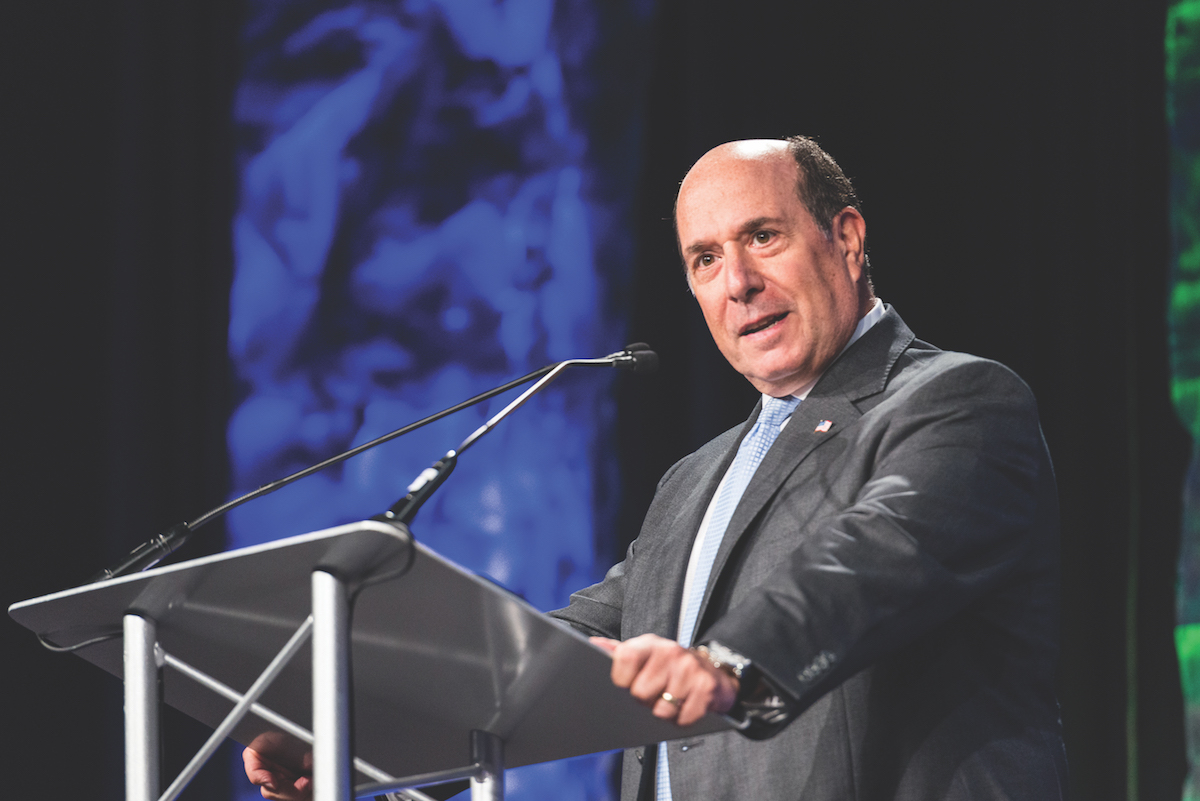 “I chose to make social media my friend years ago,” says Aron. “For me, it’s part of our brand; it’s integral to our communication. I speak openly on it, and I like the fact that I can speak to my staff about things that are important to them in a concise and clear way.” The personal element of social media also plays a lot into the fact that the most important things to Aron are his personal relationships, to which he credits his success. “I’m a product of the family, friends, and co-workers in my life who have created the mosaic of who I am,” he says.

The pieces of that mosaic originate in his childhood, when he was one of 5 kids to parents he has described as phenomenal. With a mother who graduated from Columbia Law School at just 19, and a father who split his time between the family plumbing business and charitable giving, particularly towards families and children with special needs.

One of Aron’s 4 siblings, Mark Ain, was one of the founders of Kronos back in 1977, and he invited Aron to come on board as one of the first employees fresh from university. “It’s the only place I’ve worked since I graduated, though I wasn’t overly drawn to any particular element of the business, I just wanted a job. You know what 21-year-olds are like,” laughs Aron.

“My brother said he was thinking about starting Kronos and asked if I’d help him start it. Boston seemed like a nice place to live, so I said, ‘Let’s go for it.’ I thought I’d stay a couple years, but I liked it, so I stayed. I’ve been here for 38 years, and 12 of those I have been the CEO.”

Aron worked his way up the food chain, starting by cleaning bathrooms, to answering phones, sales work and software installation, all the while observing the tactics and outcomes of different leadership styles. He was working as chief operating officer when his brother decided to step down as CEO in 2005, and he was next in line to step up. In the meantime, he also married and had children of his own, which he sees as a different and altogether greater accomplishment.

“I want to say, too, that being the CEO of Kronos is not the most important thing in my life. It does not define who I am. If 800 years from now people look back on my life and achievements, I’d want them to remember me as a great husband, a great dad and a great friend. I couldn’t care less whether they know I was a CEO.”

Kronos has thrived in Australia for more than 20 years, and 2016 was the company’s best year since its first-opened shop in 1995. The company has been very particular about Australian staffing, ensuring it strategically recruits locals who understand the market and its unique challenges. “Australia has its own set of characteristics, so we’ve made the investment to make sure our products meet the particular requirements of the market.

We’re not trying to take a product that was designed for another country and force fit it here,” says ANZ Managing Director Peter Harte, who has been a Kronite for 18 years. “Australia is one of the most complicated countries in the world when it comes to employee agreements and compliance around union rules and payment terms, so Kronos is perfect to assist organisations with this and untangle the web for them to keep employees happy.” 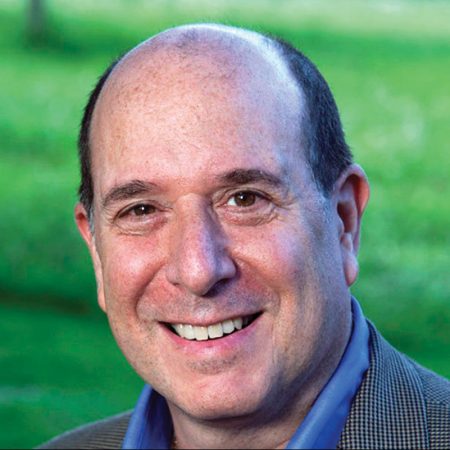