Zooming towards the future: Eric Yuan

It’s not often that your business name not only enters the everyday lexicon, but also becomes a verb in itself. And yet that’s exactly what happened for tech entrepreneur Eric Yuan, Founder and CEO of videoconferencing platform Zoom. 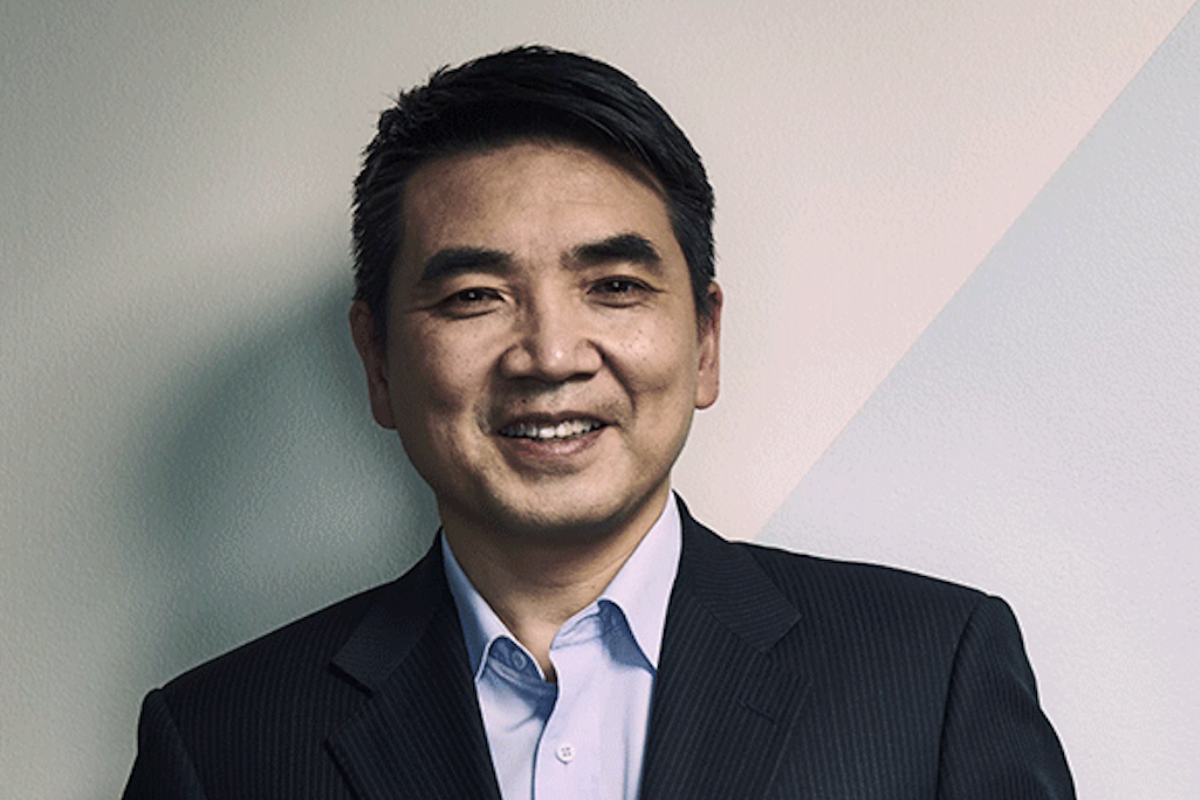 As we near the close of 2021, unless you’ve been living under a rock for the past 18 months, chances are you’ve been ‘Zooming’ regularly for at least one reason or another. Perhaps it’s for your daily work check-ins, or to take part in a yoga class, maybe it’s to help your children complete remote learning from home, or to catch up with your friends and family over a glass of wine on a Friday evening.

Irrespective of what you use it for, there’s no denying that Zoom has become a major part of life for us. But how did we get to this point, and who is the man behind the phenomenon?

Yuan grew up in Shandong Province in eastern China, the son of geology engineers. Fascinated by technology from a young age, upon finishing school, he began studying applied mathematics and computer science at Shandong University of Science and Technology.

It was during this time that the first seeds of Zoom were sown. Frustrated by the 10-hour train trip separating him from his girlfriend Sherry (who he later married, and shares three children with), Yuan spent the long journey brainstorming ways he could see her face – albeit digitally – more frequently.

“Someday if I can have a smart device and with just one click I can talk with you, can see you – that was my daydream,” Yuan said while speaking on GGV Capital’s 996 Podcast in 2018. “And every day, I thought about that – the technology was not ready, but the idea was there.”

Someday if I can have a smart device and with just one click I can talk with you, can see you – that was my daydream.

With a master’s degree under his belt, Yuan entered the workforce. He was sent to Japan for four months and, while there, happened upon one of the most pivotal moments of his young life – a speech by then-CEO of Microsoft Bill Gates, ahead of the launch of his Internet Explorer web browser.

From that moment on, Yuan understood that if he ever wanted to establish his name in the tech industry, he needed to be in Silicon Valley. However, as it turned out, that wasn’t so straightforward. A year-and-a-half and seven rejected visa applications later, the 27-year-old was finally able to move to San Jose, California in 1997.

“I realised, ‘Wow, this is the first wave of the internet revolution – I don’t think I want to miss that,’” he recalled. “So that’s why I settled down and joined WebEx to start writing code, because when I came here, I could not do anything else.”

However, Yuan was destined for bigger things. Swiftly, skilfully, he rose to the top, establishing himself as one of the most talented in the company. Before long, he became the Vice President of Engineering, in charge of collaboration software.

At the same time, WebEx was garnering a reputation as a premier videoconferencing tool – so much so that in 2007, tech giant Cisco acquired the company for US$3.2 billion (€2.8 billion). It was ahead of the curve, without a doubt, but there were many facets of the software that Yuan knew were falling short.

“Every morning when I woke up, I was not happy, because when I visited a WebEx customer, I personally felt very embarrassed, because I did not see a single happy customer,” he shared. When it came time to start his own venture, he’d know which mistakes not to make.

After 14 years, Yuan decided that although he felt attached to the business he had grown alongside, it was time to put his knowledge and experience to the test and try to make his mark. He admits the idea had occurred to him more than once over the years. “I thought about leaving WebEx several times because Silicon Valley is a startup valley, and you better join a startup company, or do something [on your own],” he said.

Quite often, if you think the market is too crowded, if you don’t really understand the customer experience, you think that game is over.

In 2011, Zoom was officially born. The premise was simple: deliver a straightforward, user-friendly conferencing platform for businesses that was built as video first, rather than the standard audio-first approach. “Our philosophy was that, if we [could] build something to let a customer enjoy using [it], I would say there’s a chance,” Yuan revealed. “Because quite often, if you think the market is too crowded, if you don’t really understand the customer experience, you think that game is over – [but if] you don’t jump on that, I will say you are going to miss a big opportunity.”

With a small team in California, as well as engineers back in China, the Zoom software was up and running by the start of 2013. Just four months later, it hit one million users. From there, its trajectory was unstoppable. By 2017, Zoom was declared a tech unicorn, with a valuation of US$1 billion (€885 million). Two short years later, the company was taken public. And three days later, it became the most valuable initial public offering of 2019.

Zoom’s swift rise to the top of the corporate videoconferencing world was unprecedented and unrivalled. And then in March 2020, everything changed. As COVID-19 spread across the globe, shutting down offices and schools and relegating vast numbers of people to their homes, the world suddenly needed a way to connect. Lo and behold, there was Zoom – the answer to everyone’s problems.

As lockdowns continued, Zoom established itself as an essential part of daily life. As it turned out, there wasn’t much that couldn’t be done over the platform, and before long people were hosting Zoom parties, going on Zoom dates and doing Zoom Pilates. It had well and truly shed its previous iteration as a business-only platform.

But as Yuan explained in a blog post, that had never been the company’s intention. “We did not design the product with the foresight that, in a matter of weeks, every person in the world would suddenly be working, studying and socialising from home,” he explained. “We now have a much broader set of users who are utilising our product in a myriad of unexpected ways, presenting us with challenges we did not anticipate.”

We did not design the product with the foresight that, in a matter of weeks, every person in the world would suddenly be working, studying and socialising from home.

From concerns about security and accessibility to handling the increased volume of users internationally, Zoom responded to each issue as rapidly as it presented itself.

“We’re learning quickly,” Yuan said in an interview with Business Insider in December 2020. “That’s why we’ve had to change our internal practices and processes to embrace those new use cases and new consumers. At Zoom, for every employee, myself included, the number one goal is: what can we do differently to become a better version of ourselves?”

The team could have crashed and burned under the pressure, but instead, they rose to the occasion, flourished and dominated. In 2020, Zoom was Apple’s most downloaded app.

“I feel like overnight, this is one of the catalysts where in every country, everybody’s realised they needed to have a tool like Zoom to connect their people,” Yuan told Forbes in March 2020. “I think from that perspective, we feel very proud. We’ve seen that what we are doing here, we can contribute a bit to the world.”

Ultimately, Zoom’s success may be attributed to one thing in particular. For Yuan, culture is everything, and it all comes down to something not always associated with operating a successful business: happiness. “Our company culture is delivering happiness and our company’s value is care,” he said on the 996 Podcast.

Clearly, as a philosophy, it works – in 2018, Yuan was named the Top CEO on Glassdoor, boasting an approval rating of 99 per cent. You only have to look at the numbers to gauge Zoom’s success – as recorded by Forbes, his current net worth is US$13.5 billion (€12 billion), with Zoom’s estimated market valuation sitting at US$100 billion (€88.5 billion).

Now, looking to the future, there’s no doubt that pandemic or not, there’s been an undeniable shift in the way that we operate. Many workplaces have realised that conducting business or meetings digitally can be even more effective than face to face. More of us are working from home more than ever before – something that could be here to stay, as businesses and employees re-evaluate work–life balance and other factors like long commutes to the office.

I hope this crisis can be over very, very soon, but one thing I know for sure is that companies will learn this is the way to work.

“I hope this crisis can be over very, very soon, but one thing I know for sure is that companies will learn this is the way to work,” Yuan told The Associated Press. “I am pretty sure almost every company will be thinking about it and say, ‘Hey, maybe working from home makes sense,’ and maybe let every employee work from home, maybe once a week. Previously, a lot of businesses didn’t even want to try.”

So even while we may return to gyms and have less need to go on dates digitally, there’s little doubt that at the very least, in the corporate sphere, Zoom is here to stay.