The man behind the brand: Jeff Bezos 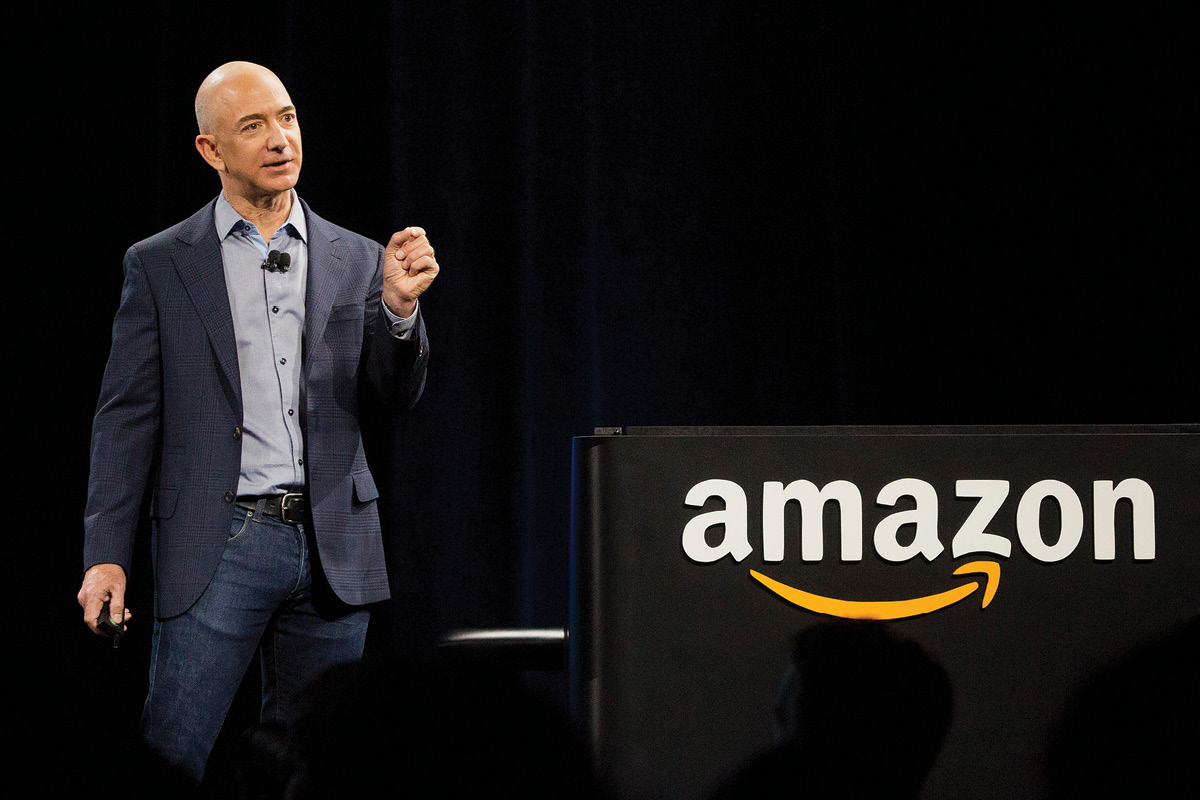 Bezos is “the most remarkable business person of our age”, famed US investor Warren Buffett announced in May. The Amazon CEO was championed as a hero for building globally dominant businesses that are so divergent in terms of customers and operations almost simultaneously. Specifically, the world-leading ecommerce retailer is also the world’s leading cloud-computing provider, powering much of the internet.

Was Buffett selling Bezos short? After all, he’s also on the bleeding edge of artificial intelligence with the Amazon Echo and its voice assistant Alexa, a trailblazer in machine learning and data wrangling, the financial saviour of one of the world’s top newspapers, The Washington Post, and he’s on a mission to launch space tourism, maybe sometime next year… and that’s just the top line for Bezos.

Renowned as the mathematics whiz and computer scientist who in 1994 quit his job as a Wall Street hedge fund analyst to deploy his “regret minimisation strategy” to participate “in this thing called the internet”, today Bezos is the world’s third richest man thanks to the success of the Amazon empire.

Bloomberg calculated Bezos’s net worth at US$76.7 billion in April 2017, and Amazon itself is the world’s fifth-largest company by value, worth over US$400 billion. Chances are Bezos is not counting. The relentless entrepreneur’s sights are set on the long term. Analysts and often shareholders are agog as Bezos unerringly puts the phenomenal growth of his business interests ahead of profits.

Today amazon.com, the online bookseller Bezos launched from the garage of his then new Seattle home, sells almost everything worldwide. Made-to-measure fashion is the latest on a rampantly expanding stock list that includes furniture, beauty products, fine wine and art – and a proprietary range of consumer electronics and mobile devices. Amazon’s retail sales alone are now worth US$100 billion and rising. Morgan Stanley predicts its sales will rise 16% annually to 2025.

Today Bezos is the world’s second-richest man thanks to the success of the Amazon empire.

Yet Amazon’s basic retail business model is disarmingly simple. Low prices lure customers and merchants, boosting volumes that lead to even lower prices. Beneath this is Bezos’s grit to eradicate every pain point from the buying process, from within-the-hour delivery to patented one-click shopping and wi-fi enabled ‘dash buttons’ that can be stuck on the wall and pressed to reorder favourite products. Growth will continue, provided the company stays customer- rather than competitor-obsessed. Bezos repeats: “Put the customer first. Invent. And be patient.”

The smartest guy in the room

Like other mega-cap technology companies Facebook, Netflix and Google, Amazon knows no boundaries in both scope and reach, observes Jeff Cole, founder of the Center for the Digital Future at the University of Southern California. Cole, who’s long studied Amazon and often checks in with the company, says Bezos is “incredibly smart” and “unbelievably competitive”.

“He looks at any business and says, ‘I can do it better’, and in almost every instance he can. If you’re looking for the real successor to Steve Jobs, the smartest guy in the room and the one who can see round corners, it’s Jeff Bezos,” says Cole, noting Bezos’s enigma isironically fueled by his inability to see any value in talking to the media.

The arch-experimenter and adherent to the internet age catch-cry “move fast and break things” is exceptional because he rarely fails, Cole claims. So “the ultimate opportunist” is also a strategic genius. The business plan he wrote 23 years ago on the road trip from New York to Seattle just keeps diverging. Amazon Web Services, the most profitable part of the empire to date, actually grew from the company’s own need for ecommerce infrastructure.

Entertainment is now up in lights, encompassing video on-demand – through the Amazon Prime subscription deal; US$99 annually in the US for unlimited shipping on goods and a host of other services – and is now available in 200 countries. The need for quality content has spawned Amazon Studios, winner of a 2015 Golden Globe for web TV series, Transparent, and the 2017 Best Actor and Best Screenplay Academy Awards for Manchester by the Sea.

Bezos’s appetite for food sales, piqued by the superfast AmazonFresh grocery service that has been rolling out in the US since 2007 and subsequently across Europe and Japan, more recently has sent the internet explorer offline with the prototype of grab-
it-and-run Amazon Go, a checkout-free bricks-and-mortar convenience store that uses a smartphone app to tot up the bill and charges directly.

Despite saying he’d never go there, Bezos has been dabbling offline for some time with curated bookstores and pop-up shops. All the better to cosy up to customers, say Amazon insiders.

The roar of Bezos’s mantra

Meanwhile the need for super-fast delivery and logistics have given rise to a growing population of robots in warehouses (the company has just filed a patent for an airborne blimp warehouse), fleets of Amazon-branded trucks and some 40 wide-
bodied jets, as customers’ parcels are landing by drone in the UK. The roar of Bezos’s fierce mantra for putting customers first will soon to be experienced in Australia and South East Asia, with the long-anticipated launch of Amazon retail services. Earlier this year when Amazon topped Fast Company’s Most Innovative Companies list, triumphant for staying nimble while achieving great scale, Bezos explained his compulsion for speed and change: “Our customers are loyal to us right up until the second somebody offers them a better service. And I love that. It’s super-motivating for us.”

Despite its magnitude, the company cleaves strictly to its founder’s thinking. Jeff Wilke, Amazon’s CEO of Worldwide Consumer, told author Brad Stone: “[Amazon] is scaffolding to magnify the thinking embodied by Jeff … He learned things from each of us who had expertise and incorporated the best pieces into his mental model. Now everyone is expected to think as much as they can like Jeff.”

That’s because the voracious innovator can be something of an uncompromising boss.
“The people who do well at Amazon are often those who thrive in an adversarial atmosphere with almost constant friction,” writes Stone in The Everything Store: Jeff Bezos and the Age of Amazon. “Bezos abhors what he calls ‘social cohesion,’ the natural impulse to seek consensus.”

A blistering 2015 New York Times feature described the company’s tough culture, reporting the CEO’s remarks to employees: “Are you lazy or just incompetent?”; “Why are you wasting my life?” Bezos asked an engineer mid-presentation.

With executives he’s equally rambunctious preferring to “disagree and commit”, rather than waste time haggling about decisions. Bezos finds inspiration in books. The creator of the Kindle e-reader reportedly keeps paper tomes, well thumbed, hand-annotated throughout.

An all-time favourite is Made in America by WalMart founder Sam Walton, which expounds on discount retailing, the values of frugality and a bias for action – experimenting and making mistakes, all of which Amazon embraced as it metaphorically brought WalMart to its knees online.

Another Bezos obsession is the critical importance of Amazon staying a ‘Day One’ company, that is, a start-up at heart. In his most recent letter to shareholders, he answers a question posed at a recent all-hands meeting: “Jeff, what does Day 2 look like?” “Day 2 is stasis. Followed by irrelevance. Followed by excruciating, painful decline. Followed by death. And that is why it is always Day One,” he says. 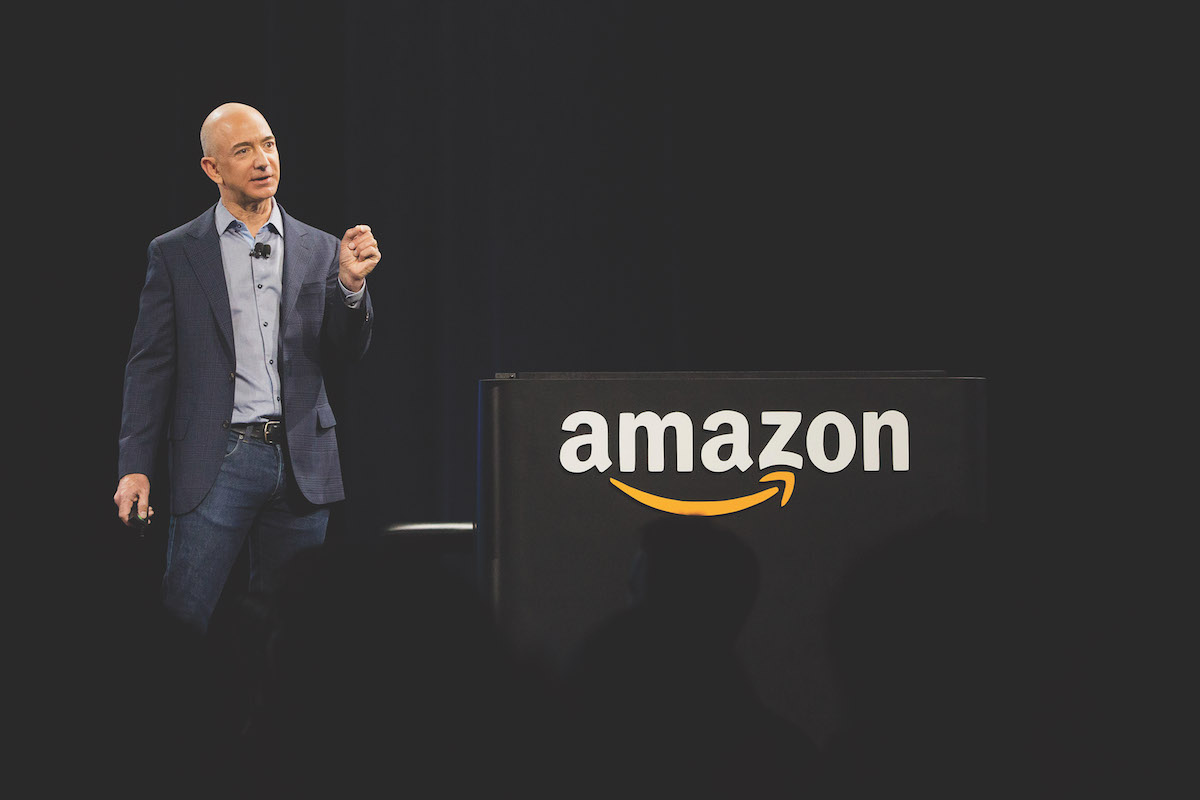 How does he keep the vitality of Day One inside a huge organisation? Bezos admits he doesn’t have all the answers, and predictably puts customer obsession first.
“Even when they don’t yet know it, customers want something better, and your desire to delight customers will drive you to invent on their behalf,” he says.

Amazon Prime is a standout example – it’s estimated 50% of US households now subscribe.
Take a skeptical view of proxies, Bezos suggests. Don’t get distracted by process over serving customers: “You stop looking at outcomes and just make sure you’re doing the process right.”

Eager adoption of external trends also keeps the company on Day One, while high-velocity decision-making means escalating any “misalignment” in the business, according to Bezos. Hence the imperative to “disagree and commit” because “wearing people down is slow and de-energising”, he insists.

Who will win the corporate space race?

While contemplating the future of the internet back in 2000, when the dotcom
bust sent share prices plummeting, Bezos’s ambitions went through the stratosphere. He secretly started making rocket ships.

Through the endeavours of his Texas-based Blue Origin aerospace company, which is currently building a rocket manufacturing centre in Cape Canaveral, he’s taking on billionaire innovative rivals Elon Musk and Sir Richard Branson and is intent on winning the corporate space race. Bezos has just powered up his efforts after cashing in almost US$1 billion worth of Amazon shares in early 2017, according to filings with the US Securities and Exchange Commission.

“While contemplating the future of the internet back in 2000, Bezos’s ambitions went through the stratosphere. He secretly started making rocket ships.”

Space continues to be a private obsession, one that springs from a childhood devotion to the Star Trek television series and from the encouragement of his maternal grandfather, a one-time director of the US Atomic Energy Commission. A wall at Amazon HQ features a transcript of the communications between the moon-landing astronauts of Apollo 11 and mission control in 1969.

Today Bezos works one day a week as head of Blue Origin, which has a familiar ethos as it aims to lower the cost of space travel with reusable rockets and get in first with a commercial astro-tourism voyage in 2018. “If we can make access to space low-cost, then entrepreneurs will be unleashed,” Bezos told the 33rd Space Symposium in Colorado in April. “You will see creativity, you will see dynamism, you will see the same thing in space that I’ve witnessed on the internet in the last 20 years.” People, it’s time to prepare for lift off.